CHICAGO (March 29, 2022) – The U.S. Men’s National Team stands on the precipice of qualification to the 2022 FIFA World Cup heading into its 14th and final match of the Octagonal. Traveling to face Costa Rica on Wednesday night, the USA would punch its ticket to Qatar 2022 with a win, draw, or loss by less than six goals against Los Ticos.

Costa Rica is undefeated in its last six Octagonal matches dating back to the November window. In that time, Los Ticos have gone 5-0-1, conceding just two goals.

ON THE BRINK OF QUALIFICATION

With just one match left to play in the 14-game gauntlet of Concacaf World Cup qualifying, the USA is second of eight teams in the Octagonal standings. The USMNT can clinch its World Cup berth with a victory, draw, or loss by less than six goals at Costa Rica. The USA has 25 points to Costa Rica’s 22, but holds a massive advantage in the first tiebreaker - goal differential (+13 vs. +3), putting the U.S. in excellent position to qualify on Wednesday night.

The top three teams in the Octagonal qualify automatically for the 2022 FIFA World Cup in Qatar, while the fourth-place team will participate in an intercontinental playoff against the winner of Oceania’s qualifying tournament. The USA is guaranteed to finish in the top four of the Octagonal. 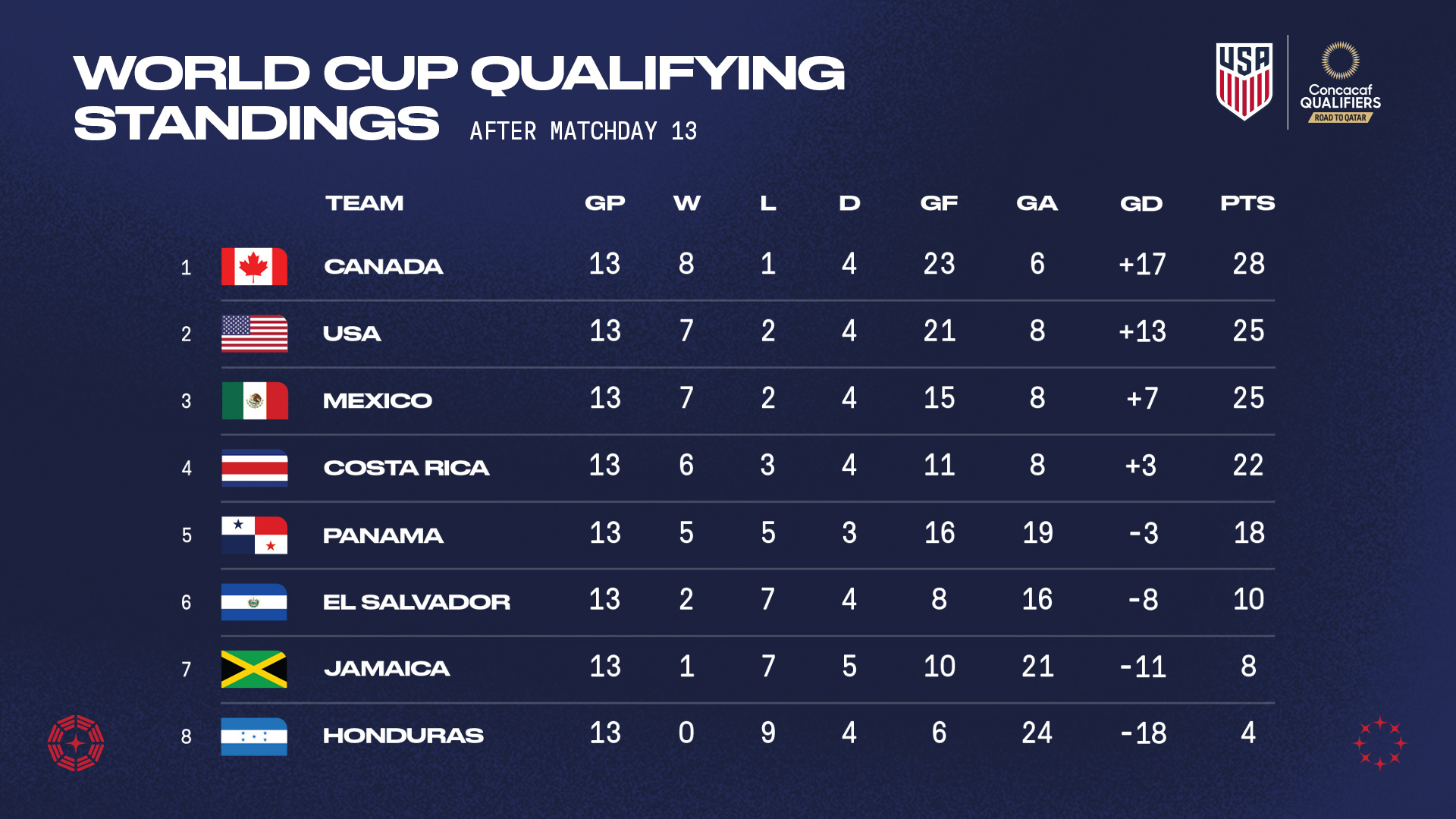 The USMNT put itself in prime position to qualify in Costa Rica with an emphatic 5-1 home win vs. Panama on Sunday night in front of a sell-out crowd of 25,022 at Exploria Stadium in Orlando, Fla. Forward Christian Pulisic led the charge with his first international hat trick as the USA put home four first-half goals after scoring in the opening frame just four times through the first 12 games of the Octagonal.

Pulisic opened the scoring with a penalty in the 17th after Walker Zimmerman was taken down in the box during a set play opportunity. He added another penalty kick goal in first-half stoppage time when the other U.S. center back, Miles Robinson, was similarly brought to the turf. In between, some dynamic attacking play created goals for forwards and FC Dallas teammates Paul Arriola and Jesús Ferreira. Arriola headed home the game’s second goal in the 23rd, while Ferreira finished a nifty ball from Arriola in the 27th.

In the second half, Pulisic completed his hat trick with a remarkably skillful run through the Panamanian defense inside the 18-yard box, taking three touches to finesse three defenders and slot a shot past the goalkeeper.

After missing Sunday’s match on one-game suspensions due to yellow card accumulation, defender DeAndre Yedlin and forward Tim Weah are once again available for selection at Costa Rica.

Defender Shaq Moore was added to the roster before the USA-Panama game once Yedlin was ruled out. The right back impressed in his return to the USMNT, going the full 90 in the 5-1 victory.

Prior to the start of the window, defender George Bello was added to the squad to replace injured defender Sergiño Dest. Forward Brenden Aaronson was also ruled out of the roster after suffering an injury training with his club.

After Aaron Long and Erik Palmer-Brown made their World Cup qualifying debuts at Mexico, a record-tying 29 players have made their first WCQ appearance this cycle. The 29 debutants tie the 1998 cycle, which saw several debuts as the USMNT didn’t need to qualify for the United States-hosted 1994 FIFA World Cup. A total of 38 players have been used through the first 12 matches, tied for the second-most in one cycle. Forty-three players were used in the 18-game 2010 cycle, which included two preliminary round matches.

FIGHTING TO THE FINISH

World Cup Qualifying in the Concacaf region is a gauntlet, and history shows that qualification usually comes down to the final matches of the competition. While the current format features 14 matches and eight teams, qualifying previously consisted of 10 matches and six teams. In five previous successful World Cup qualifying cycles, the USA didn’t clinch until Matchday 9 or 10 twice, Matchday 8 twice and Matchday 7 once.

After some time away from the USMNT, four players earned long-awaited returns to the field for the USA and have made their presence known. Defenders Aaron Long and Erik Palmer-Brown earned their first World Cup qualifying caps vs. Mexico in their first WCQ call-ups. Long had been recovering from a ruptured Achilles suffered last May, training individually with the USA in November before joining the squad for December and the January pre-qualifying training camp. The New York Red Bulls center back has captained the team five times – third-most among the 88 players that have earned caps during the Berhalter era. Palmer-Brown is back in camp for the first time since the USA’s March 2021 friendlies vs. Jamaica and Northern Ireland and Thursday at Mexico marked his first cap under Berhalter.

In addition to forward Gio Reyna’s return to the pitch for the first time since September vs. Mexico, forward Jordan Pefok’s appearance at Mexico was his first appearance since Sept. 6 vs. Canada. Goalkeeper Ethan Horvath’s March call-up also marked his first since the September international window.

The USA topped Costa Rica 2-1 when the teams met on home soil in Columbus, Ohio on Oct. 13. Despite conceding in the first minute during a frenzied start to the match, the USA rallied as defender Sergiño Dest scored a spectacular goal in the 25th. A hard-hit shot from forward Tim Weah in the 66th resulted in the game-winning own goal in front of a raucous, sell-out crowd at the new Lower.com Field in C-Bus as the USA improved to 9-1-3 all-time in the Ohio capital. The USA’s starting line-up vs. Costa Rica was its youngest in any official competition at 22 years, 61 days.

Los Ticos return home to close out World Cup qualifying after two straight wins to start the window and keep their hopes for a direct ticket to Qatar alive. Costa Rica kicked off March with a 1-0 win vs. Octagonal-leading Canada. While Canada played down a man for 56 minutes, Celso Borges netted in first-half stoppage time to give Costa Rica a 1-0 lead it would not relinquish. Traveling to face already-eliminated El Salvador on the weekend, the Central American squads traded goals after Costa Rica’s Anthony Contreras opened the scoring in the 30th, but Los Ticos once again finished the first half strong with a goal from Joel Campbell in stoppage time for a 2-1 victory.