The Americans will book a berth to Qatar with a win, draw or even a loss. The Ticos (6-3-4, 22 points) would have to win by six goals at Estadio Nacional to push the USA (7-2-4, 25) into fourth place. The second-place USMNT goes into the game with a far superior goal differential, sitting +13 to Costa Rica’s +3.

For a country of five million people, Costa Rica has enjoyed remarkable success when it comes to the FIFA World Cup.

In eight qualifying runs since 1990, the Los Ticos have reached the final tournament on five occasions and four times in their last five attempts.

Debuting at Italia ’90, they became the first Concacaf team to book a spot in the knockout round of a World Cup played in Europe under head coach Bora Milutinovic, who later directed the Americans at USA 1994.

Costa Rica also qualified for the 2002, 2006, 2014 and 2018 competitions. The Ticos finished an impressive eighth at Brazil 2014, with a 2-0-3 mark. They won Group D, which included Uruguay, Italy and England, with a 2-0-1 record. They survived a shootout to defeat Greece in the Round of 16 before losing in another shootout to the Netherlands in the quarterfinals. 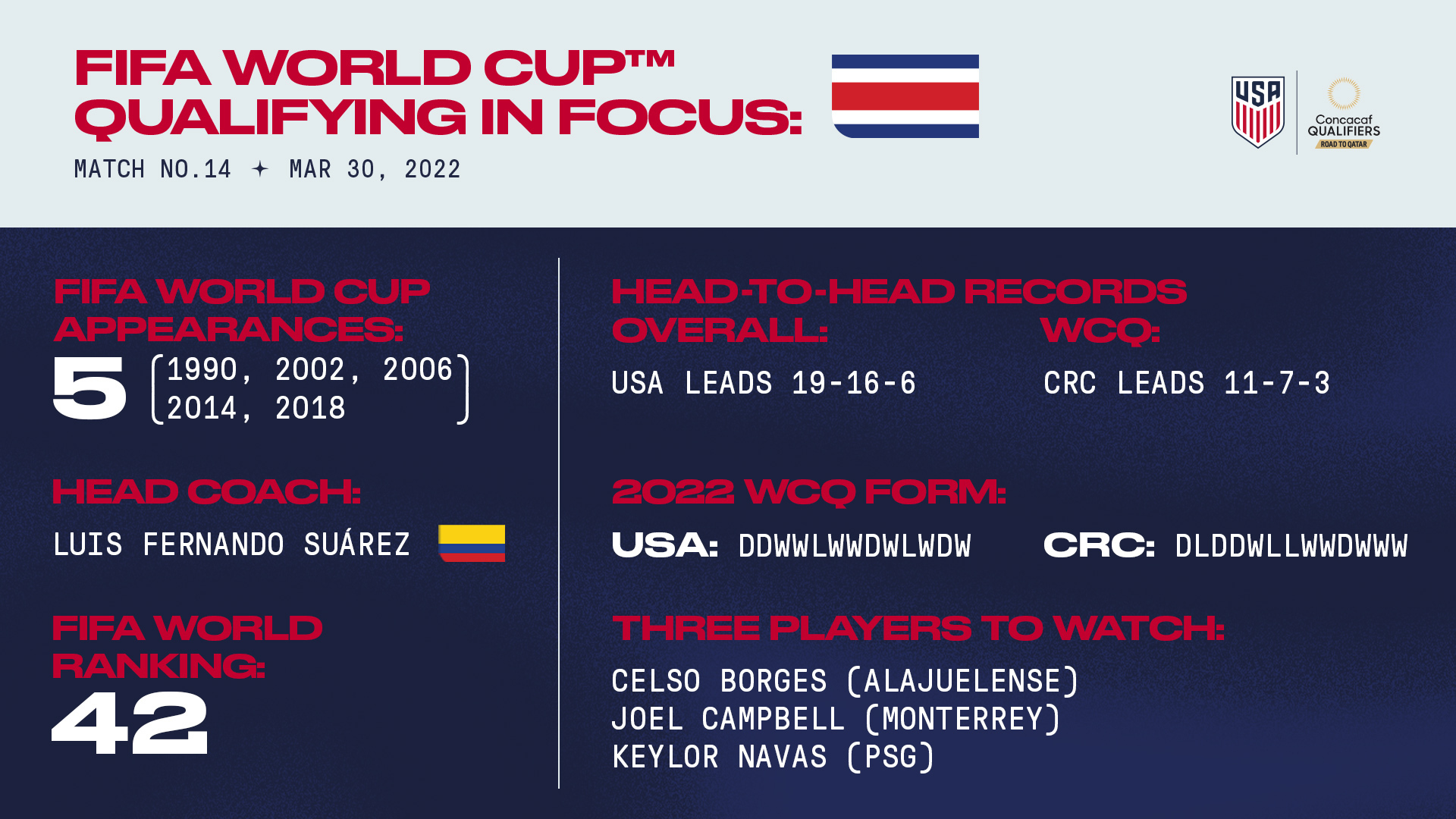 The Americans have endured a frustrating FIFA World Cup Qualifying history in Costa Rica with a 0-9-1 record.

There are three games in which the USA has come close to winning or securing points.

In its very first qualifier on May 26, 1985, the USMNT forged a 1-1 draw in Alajuelense, the only time it has come home with a point. Two minutes after Oscar Ramirez scored to give the hosts a 42nd-minute lead, John Kerr, Jr., then attending Duke University, volleyed home a Jeff Hooker cross.

The U.S. made the Ticos sweat in a 3-2 defeat at Estadio Saprissa on March 23, 1997. Eric Wynalda and Roy Lassiter, who had played professional in Costa Rica, scored for the visitors. The Central Americans countered behind goals by Hernan Medford, Maurico Solis and Harold Wallace, who scored the game-winner in the 78th minute.

In the most controversial ending to a WCQ, Costa Rica edged the USA, 2-1, on a phantom hand ball call late in the match at Saprissa on July 23, 2000. Current USMNT head coach Gregg Berhalter was called for a hand ball in the box, although videos clearly showed he headed the ball out of bounds. Medford converted the ensuing penalty kick two minutes into stoppage time.

After a 0-1-3 start, Costa Rica has surged into fourth place. The stingy Ticos have recorded six clean sheets in 13 qualifiers, including four consecutive shutouts. The team is tied with the USA and Mexico for second place in goals conceded (eight).

On the flip side, the Central American side has scored 11 times, fifth out of eight teams.

Since Jan. 27, the Costa Ricans are 4-0-1 with four shutouts. Their shutout streak ended at 446 minutes when El Salvador's Cristian Gil scored in the 31st minute of their 2-1 win on Sunday.

The Central Americans began their run with a 1-0 home win over Panama on Jan. 27 behind Bryan Ruiz's 65th-minute goal, followed by a scoreless draw at Mexico three days later. They completed the winter window with a 1-0 victory at Jamaica as Joel Campbell scored in the 62nd minute on Feb. 2.

They recorded a 1-0 home victory over first-place Canada on March 24. Celso Borges tallied a minute into first-half injury time.

On Sunday, March 27, Antonio Contreras and Campbell tallied first-half goals in a 2-1 win at El Salvador.

Luis Fernando Suárez was named head coach on June 22 after Ronald Gonzalez was fired following Costa Rica’s' 4-0 loss to the USMNT in the Concacaf Nations League.

The 62-year-old Colombian has a wealth of coaching experience, having directed club and national teams the past 22 years.

He has a history of coaching teams into the FIFA World Cup, leading Ecuador to the 2006 competition in Germany and Honduras to South Africa 2010.

Suarez also coached at Atletico Nacional, Deportivo Cali in Colombia, among other assignments. He was managing Atletico Bucaramanga when he got the call to take over the Costa Rican reigns.

A defender, Suarez played at only two clubs during a 16-year career at Atletico Nacional and Deportivo Pereira.

Nine players are over 30.

The roster is dominated by 20 domestic-based performers. Following a long-standing tradition, Herediano and Alajuelense dominate the national side with seven and six players, respectively.

Ruiz is the current team leader with 29 goals, followed by Borges with 27 and Campbell at 23.

Borges, Ruiz and Campbell lead the way with two goals apiece in the Octagonal. Oscar Duarte, Keysher Fuller, Jimmy Marin, Gerson Torres and Anthony Contreras have one goal each.