The USMNT will face the Islamic Republic of Iran in its 2022 FIFA World Cup Group B finale on Tuesday, November 29 at 3 p.m. ET
Chris KennedyApril 1 2022
5 Things 2 Know
In the 2022 FIFA World Cup Draw held on April 1 in Doha, Qatar, the U.S. Men’s National Team was drawn into Group B with England, Islamic Republic of Iran and Scotland, Ukraine or Wales, as those nations will contest a European play-off in June.

As part of our coverage of the Draw, we’re taking a look at each of the USA’s three group stage opponents. Here are Five Things to Know About Iran, the USMNT’s third and final Group B match-up.

Iran clinched its spot in Qatar as winner of its group in Asia’s third round of qualifying. In the 10-game round robin, Iran went 8-1-1 to secure its third-straight World Cup ticket. Drawn in Group A, Iran faced off against Iraq, Korea Republic, Lebanon, Syria and United Arab Emirates. Team Melli punched its ticket with a 1-0 home win vs. Iraq on January 27 with three games to play, becoming the first Asian country to qualify for Qatar.

The Iranians entered AFC qualifying in the second round, drawn in Group C alongside Iraq, Bahrain, Cambodia and Hong Kong. Iran also topped its second round group, out-scoring its opponents 34-4. The team’s 49 goals in its two World Cup qualifying rounds were second-most in Asia to Japan’s’ 58. 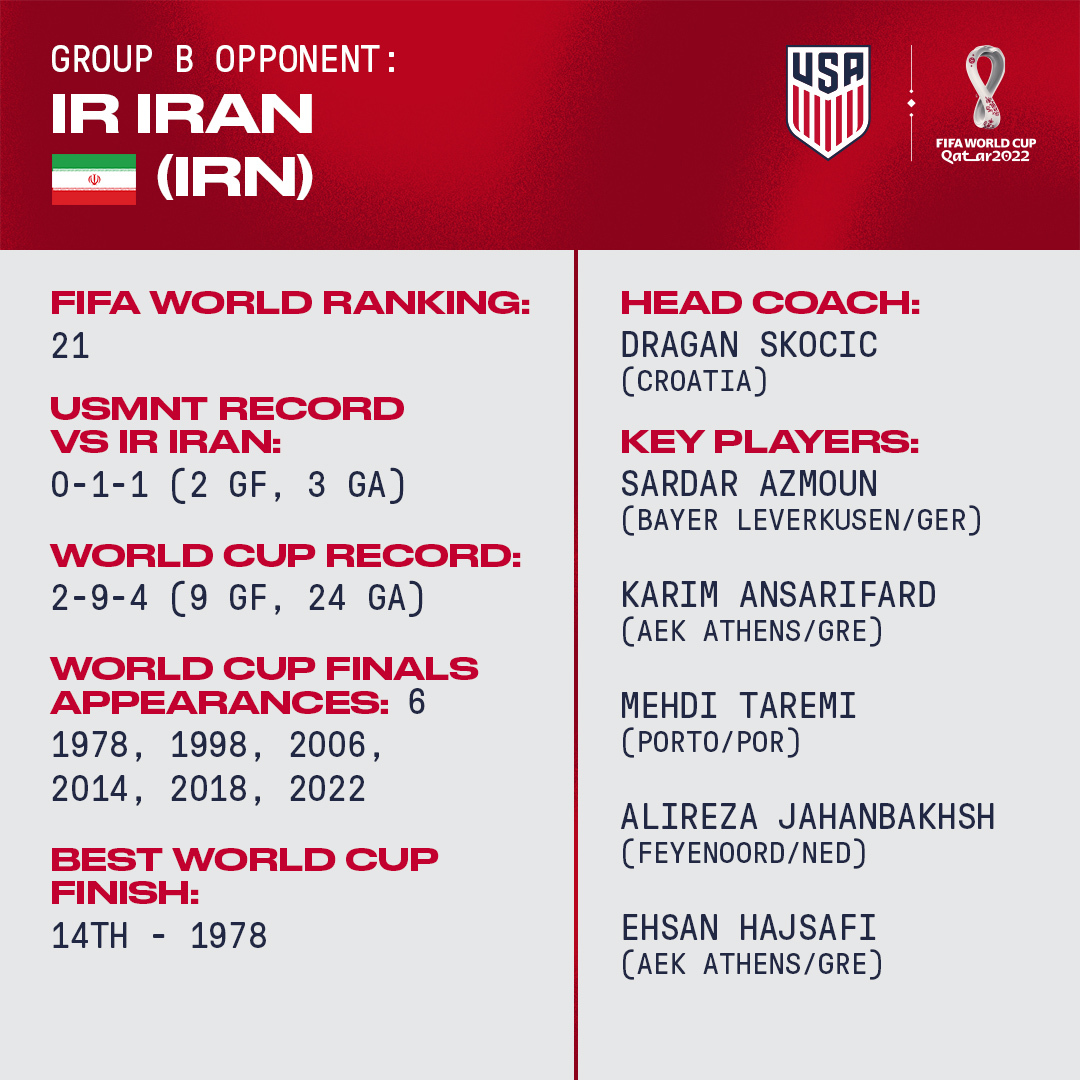 Qatar 2022 marks Iran’s fifth appearance at the FIFA World Cup and third-straight appearance. The Asian nation has never advanced from the group stage at the tournament, finishing third behind Spain and Portugal at Russia 2018 and fourth behind Argentina, Nigeria and Bosnia and Herzegovina at Brazil 2014.

Iran has a history of success at the continental level, winning three consecutive AFC Asian Cups in 1968, 1972 and 1976, the most of any Central Asian nation. In 2019, Iran finished third, reaching the tournament semifinals before falling to Japan.

The USA and Iran met in the group stage of the 1998 FIFA World Cup in France, a 2-1 defeat. Iran scored just before the half and bagged an insurance goal in the 84th minute before current USMNT general manager Brian McBride pulled one back in the 87th.

With political tension swirling, President Bill Clinton said on the morning of the match, “The World Cup is beloved across our planet because it offers a chance for people from around the world to be judged not by the place they grew up, the color of their skin, or the way they choose to worship but by their spirit, skill, and strength… I hope it can be another step toward ending the estrangement between our nations.”

The teams also met in a January 2000 friendly match at the Rose Bowl in Pasadena, Calif. Midfielder Chris Armas, currently an assistant coach with Manchester United, scored for the U.S.

Head coach Dragan Skočić took over the Iran national team in February 2020 after the squad got off to a slow start in the second round of Asian qualifying. The Croatian turned Iran’s fortunes around immediately, leading Team Melli to seven straight wins, four to close out the second round and three to start the third round strong.

Prior to joining Iran, Skočić coached for eight years in the club game in the Balkans and the Middle East, including stops in his native Croatia, Iran, Kuwait, Saudi Arabia and Slovenia. As a player, the Croatian played professionally in Croatia, Spain and the United Arab Emirates. He was the first Croatian league player to venture out and ply his trade abroad.

Midfielder Eshan Hajsafi has served as Iran’s captain throughout World Cup qualifying and has earned 118 caps for Team Mejii, the most of any active player. Playing for AEK Athens in the Greek Super League, Hajsafi appeared for Iran at the 2014 and 2018 World Cups.

With 40 goals in just 62 caps, Sardar Azmoun is Iran’s active scoring leader and led the squad with 10 goals in World Cup qualifying. The forward moved to Germany’s Bayer Leverkusen during the January transfer window and is Iran’s all-time leading scorer in the UEFA Champions League, netting six goals during his time with Russia’s Zenit Saint Petersburg.

Forwards Alireza Jahanbakhsh and Mehdi Taremi netted a number of important goals for Iran during the critical third round of Asian World Cup qualifying, each tallying four times. Taremi, currently at Porto in Portugal, netted the goal that punched Team Mejii’s ticket to Qatar vs. Iraq in January. Jahanbakhsh led the Eredivisie in scoring during the 2017-18 season with AZ Alkmaar and now plays for Dutch power Feyenoord.