In Returning the USMNT to the FIFA World Cup, the Current U.S. Squad Rewrote the History Books as the Youngest Team to Qualify for Qatar
Jeff CrandallApril 13 2022
Featured

During the course of 14 matches in seven months, a youthful U.S. Men’s National Team side navigated a rigorous road to qualify for the 2022 FIFA World Cup in Qatar.

Though there were highs and lows throughout the process, this inspiring and talented USMNT side set a number of records throughout qualifying, almost all of which lead back to the team’s unprecedented youth.

There’s plenty to look forward to for the rest of the year, so before we shift focus take a look back at some of the standout numbers from the USMNT’s successful World Cup Qualifying effort.

Youngest Team to Qualify for Qatar ‘22

Let’s start here: Your USMNT is by far the youngest in the world going to the 2022 FIFA World Cup, coming in more than a year-and-a-half younger than the next closest team.

Over 14 qualifying matches, the team’s average age of players that appeared was 24.07. The next closest was Ecuador, whose average age of all players during their 18 qualifying matches came in at 25.81. The USMNT Starting XI had an average of 23.82 through qualifying, almost two years younger than the next closest team, Ghana at 25.67. Together, the 31 World Cup finalists averaged a Starting XI age of 27.5 through qualifying, nearly four  years older than the Gregg Berhalter’s side. 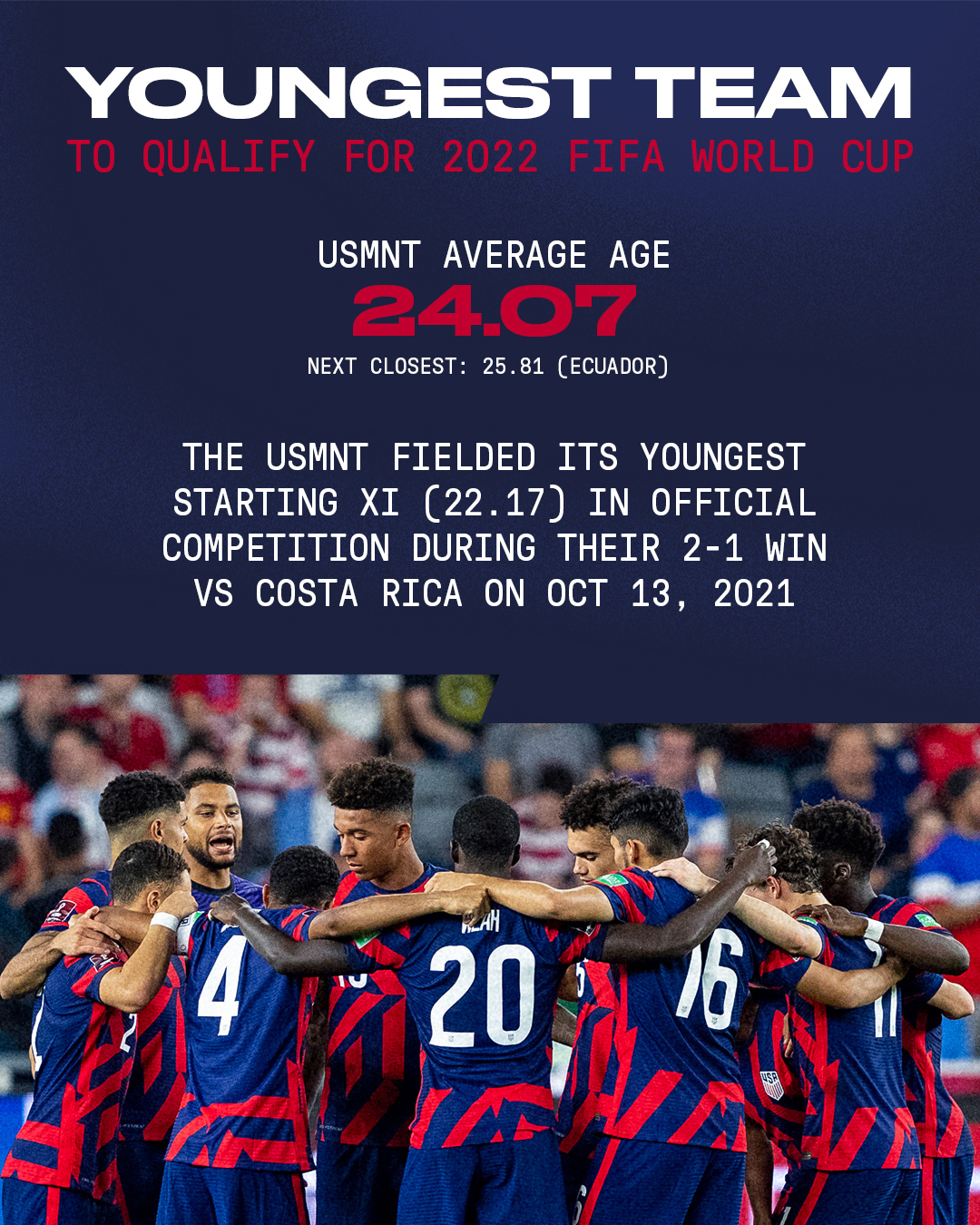 From the available data for the qualified teams, the USMNT played 10 of the 11 youngest lineups worldwide during the recently concluded cycle with all 14 lineups falling in the 23 youngest Starting XIs in the world during qualifiers dating back to October 2020.

Overall, seven of the team’s 10 youngest qualifying lineups were deployed during the 2022 cycle:

The substitute appearances by Aaron Long and Erik Palmer-Brown to help preserve the point at Estadio Azteca in Mexico City in March took the total number of qualifying debuts to 29 during the 14 matches of the 2022 WCQ cycle. That number ties the team record set during qualifying for France ‘98, a figure impacted by the fact that the USMNT did not have to qualify for the 1994 FIFA World Cup. The overall player pool was also smaller than present day. Remarkably, of the 29 WCQ debutants, 19 were 23-years-old or younger at the time, smashing the USMNT record of 14 debuts by players 23 or younger in WCQ previously set during the 2010 qualifying campaign. During that cycle, the team played four more matches than in ’22 qualifying, with 11 of those 14 Under-23 debuts coming during the team’s preliminary matchup with Barbados, a two-game series which the USMNT won 9-0 on aggregate.

INCREDIBLE UNDER-23 MINUTES AND GOALS RATE

In terms of minutes played during a cycle by players 23 and younger, the dominance of youth throughout the squad is nearly unprecedented in team history. Only numbers from the 1990 qualifying cycle – when the USMNT featured a number of semi-professional and collegiate players - trends younger than the current squad. Even then, it’s not by much.

The team’s U-23 start rate during the recently concluded cycle was 55 percent in 14 games, compared with 56 percent through 10 games in 1990 WCQ. Meanwhile, U-23 players accounted for 51 percent of the total minutes played for Qatar ’22, compared with 58 percent for Italia ’90. The next closest rate in the modern era in both categories is substantially less, coming in at 28 percent during 2006 qualifying.

The youth of the 2022 qualifying team also surpasses previous cycles when it comes to goals scored, with 15 of the team’s 21 goals (71 percent) tallied by U-23 players. That number increases to 76 percent if you credit Tim Weah with the own goal he forced in last October’s 2-1 win against Costa Rica.

In total, U-23 players either scored, assisted, contributed in the run of play or earned a foul that led to each of the 21 goals scored by the USA during the 2022 WCQ cycle.

Meanwhile, the team’s 21 goals came from 11 different goal scorers, besting the previous goal distribution record during final round qualifying, which was 10 different scorers contributing a total of 17 goals during the 1998 Hexagonal.

Brenden Aaronson entered the final window on pace to be the only player to appear in all 14 WCQ matches, but a knee injury forced him to withdraw from the March camp. With appearances in the final three matches, the trio of Kellyn Acosta, Tyler Adams and Antonee Robinson jointly led the USMNT with 13 appearances out of a possible 14 qualifiers. Robinson also led all players with 1,061 minutes played, followed closely by Adams (1,023) and center back stalwart Miles Robinson (964). 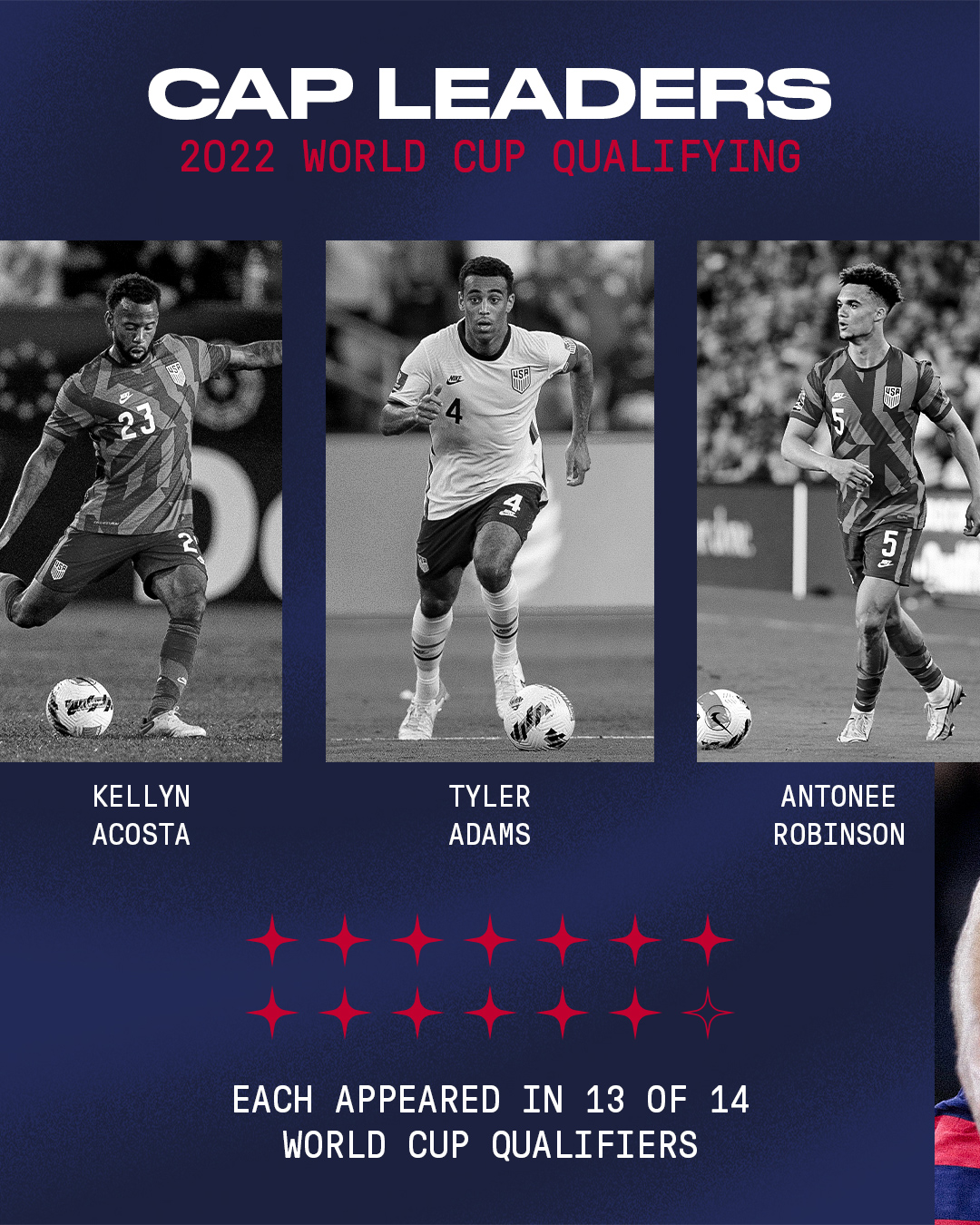 On the scoring front, Christian Pulisic led the way for the USMNT for the second-consecutive qualifying cycle. The 23-year-old recorded another five goals during 2022 qualification, matching his output during the 2018 Hexagonal. Since the 1998 cycle, he’s the first player in Concacaf to score five goals in back-to-back final round qualifying sets and sits tied for third in goals in the final round of qualifying during that time. His first goal against Panama also made him the youngest USMNT player to reach double-digit goals in qualifying (23 years, 190 days).

With 12 total WCQ goals, Pulisic now sits tied with Eddie Johnson for fourth place on the team’s qualifying goals list, just one back of Landon Donovan (13 goals). Overall, Pulisic’s 21 goals in 48 career international matches now tie him with Bruce Murray (21 goals in 85 matches) for seventh on the USMNT’s all-time scoring list. He sits just three back of Joe-Max Moore for sixth place. 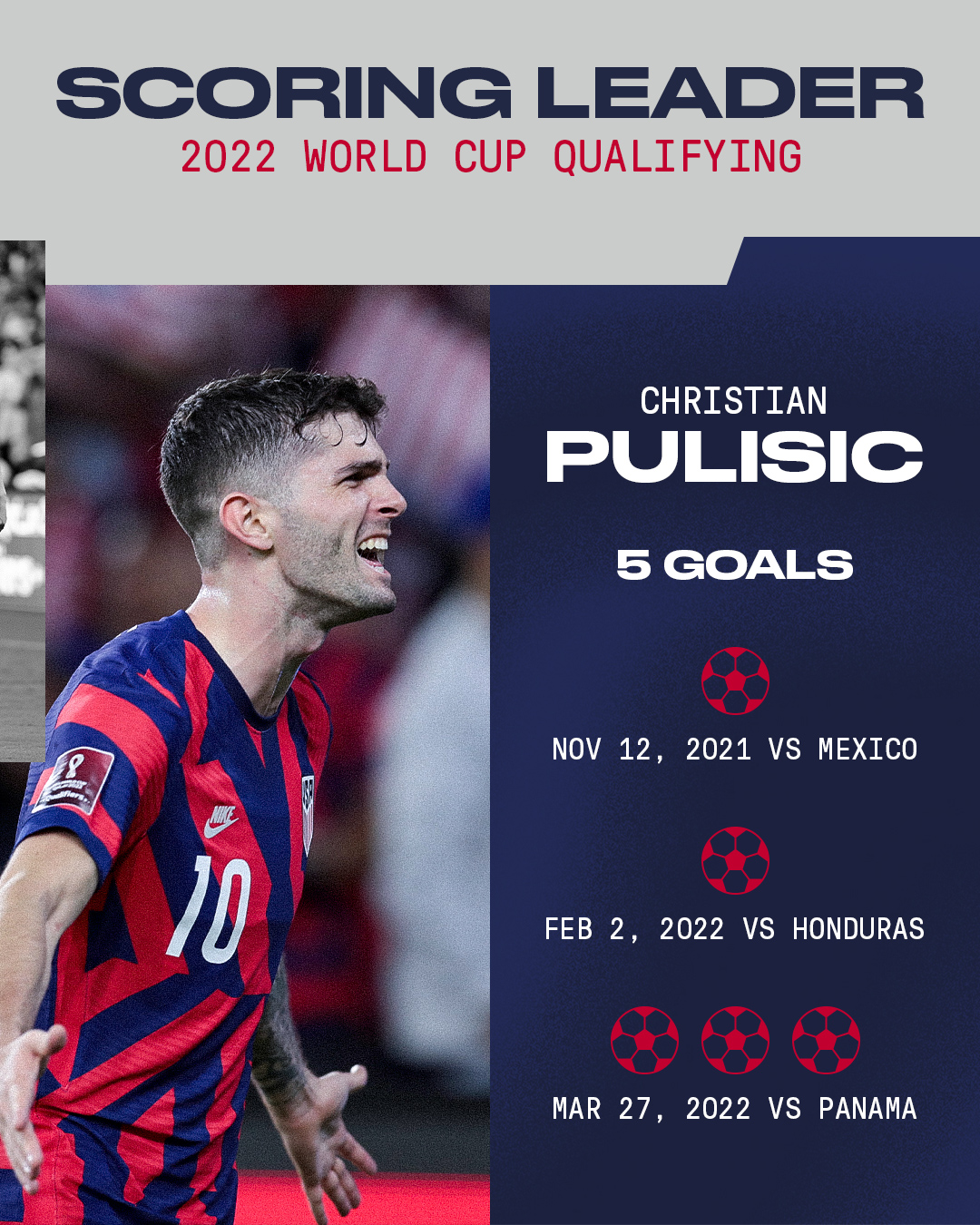 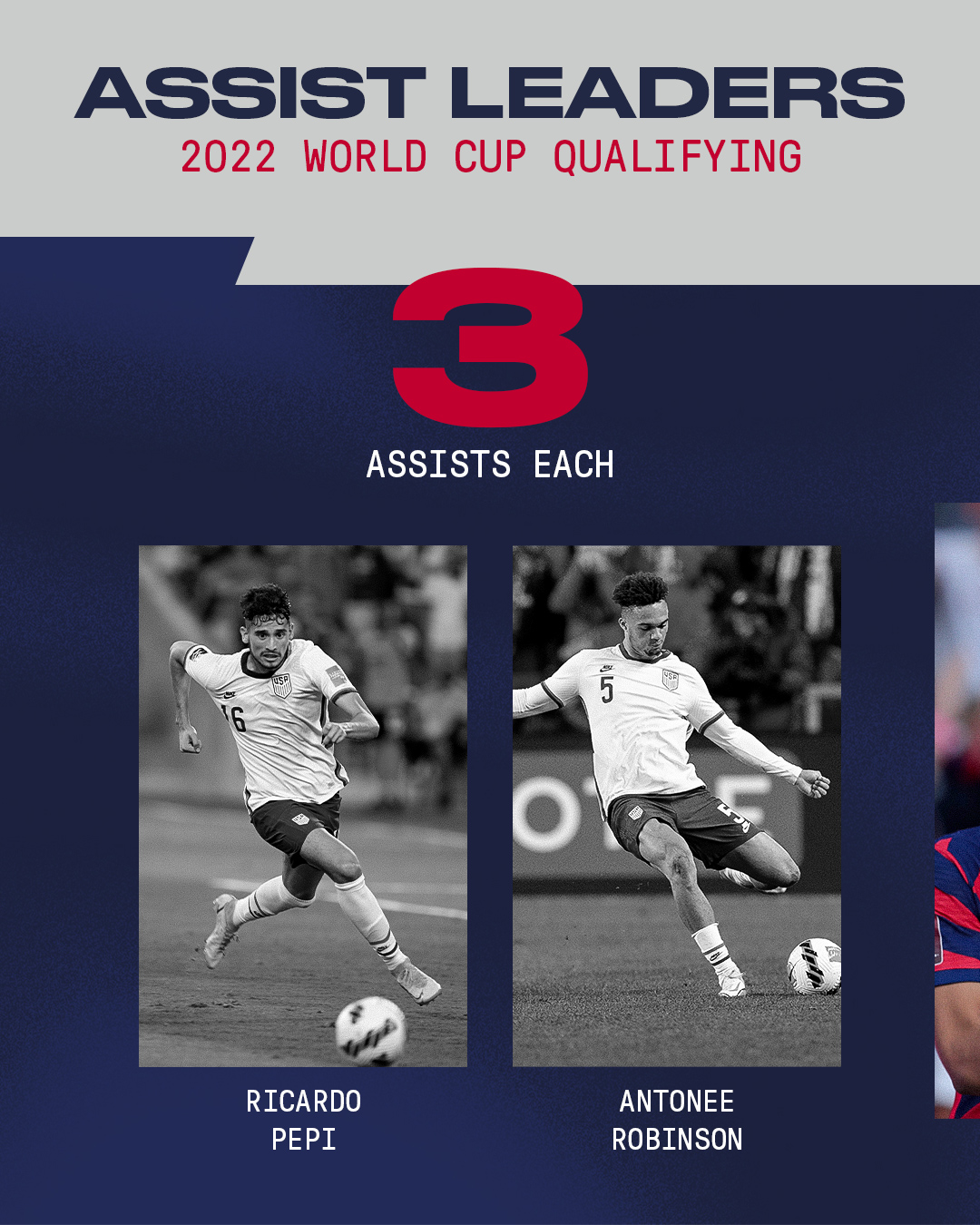 Nineteen-year-old Ricardo Pepi finished second on the team with three goals and tied Pulisic for the team lead with three assists. Of note, left back Antonee Robinson became the first USMNT defender to register multiple goals during a final round of Concacaf qualifying.