Orlando City goalkeeper Mason Stajduhar talks to usopencup.com about how he helped book his team a place in the Round of 16 before getting down on one knee to propose to his girlfriend on the Exploria Stadium pitch.
Jonah FontelaMay 20 2022
Open Cup

No one deserves a moment in the spotlight more than Mason Stajduhar.

The Orlando City SC back-up keeper, who’s been with the club since 2016, decided to make the most (and then some) of his start in the 2022 Open Cup Round of 32 against Philadelphia Union. He hatched a plan, enlisted a handful of trusted co-conspirators, and committed fully to both the game and his post-final whistle marriage proposal to girlfriend Tatiana. 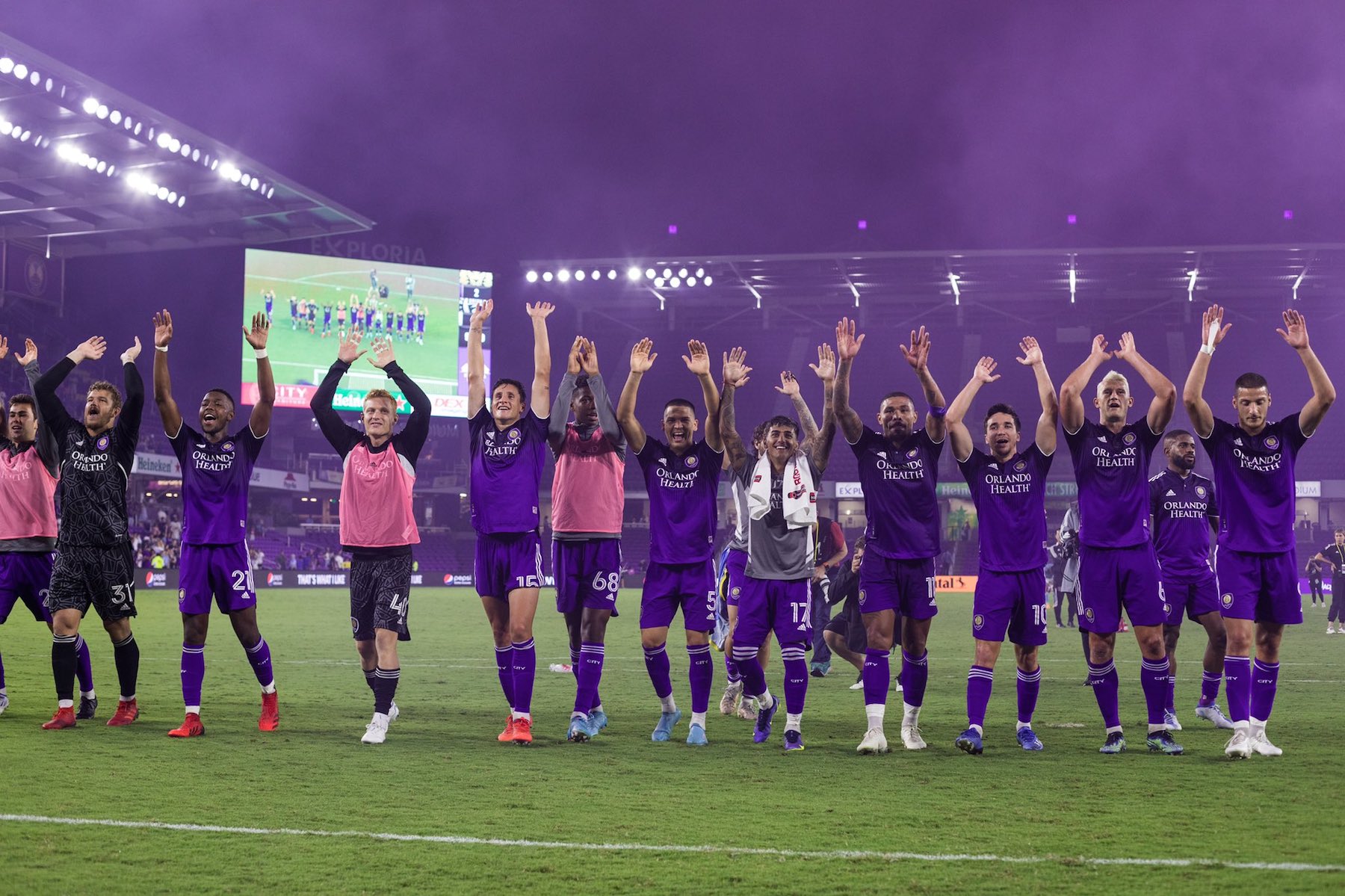 Orlando City players celebrate a place in the Round of 16

“I talked with the team chaplain and Grinny [Stajduhar’s pal of a decade, Adam Grinwis – fellow Orlando City goalkeeper and Open Cup shootout superhero from 2019] before the game, so they knew about it,” said Stadjuhar, who stashed the diamond for safe-keeping with team trainer Tyler Killinger. “First I had the usual pre-game nerves but once the first whistle goes you’re just in it and the adrenaline’s pumping.”

The first order of business on a big day for the 24-year-old Stajduhar was to win the game and see the 2019 Open Cup semifinalists from Orlando through to this year’s Open Cup Round of 16. The tall and rangy keeper – outstanding in aerial duels and crosses – did his part and more to that end.

Orlando looked to be cruising after a pair of goals from Ercan Kara and Andres Perea early in the second half. But a 77th-minute response from Stuart Findlay triggered a late-game onslaught by the visitors. Stajduhar had to make numerous saves as the Philly men charged hard for an equalizer. One of the best of the night was a last-second diving effort to his left at the very death of the contest.

“When I made that last save, and the game was over, I just rolled over onto my back and took a deep breath. I was so relieved. And then I remembered ‘oh, yeah, I have to propose now,” Stajduhar laughed. “The nerves came straight back.”

While the clock ticked down on an eventual Orlando City win, Grinwis’ wife Morgan had taken Tatiana down to the field from the club’s family suite – without giving away the big secret. While the players celebrated with the fans who’d stayed behind, Stajduhar retrieved the ring and met up with Tatiana for his second big nervy test of an already eventful evening.

“When I got down on one knee, my hands were shaking,” said Stajduhar, who popped the question near the entrance to the tunnel. “It would have been pretty bad if she said no.”

She said yes, of course, and the fans who’d stayed behind were treated to a double win. One was a club-wide success on a hunt of further Open Cup glory and the other a special and unique moment for a beloved player who’s had his share of hard luck in his seven years in Orlando. 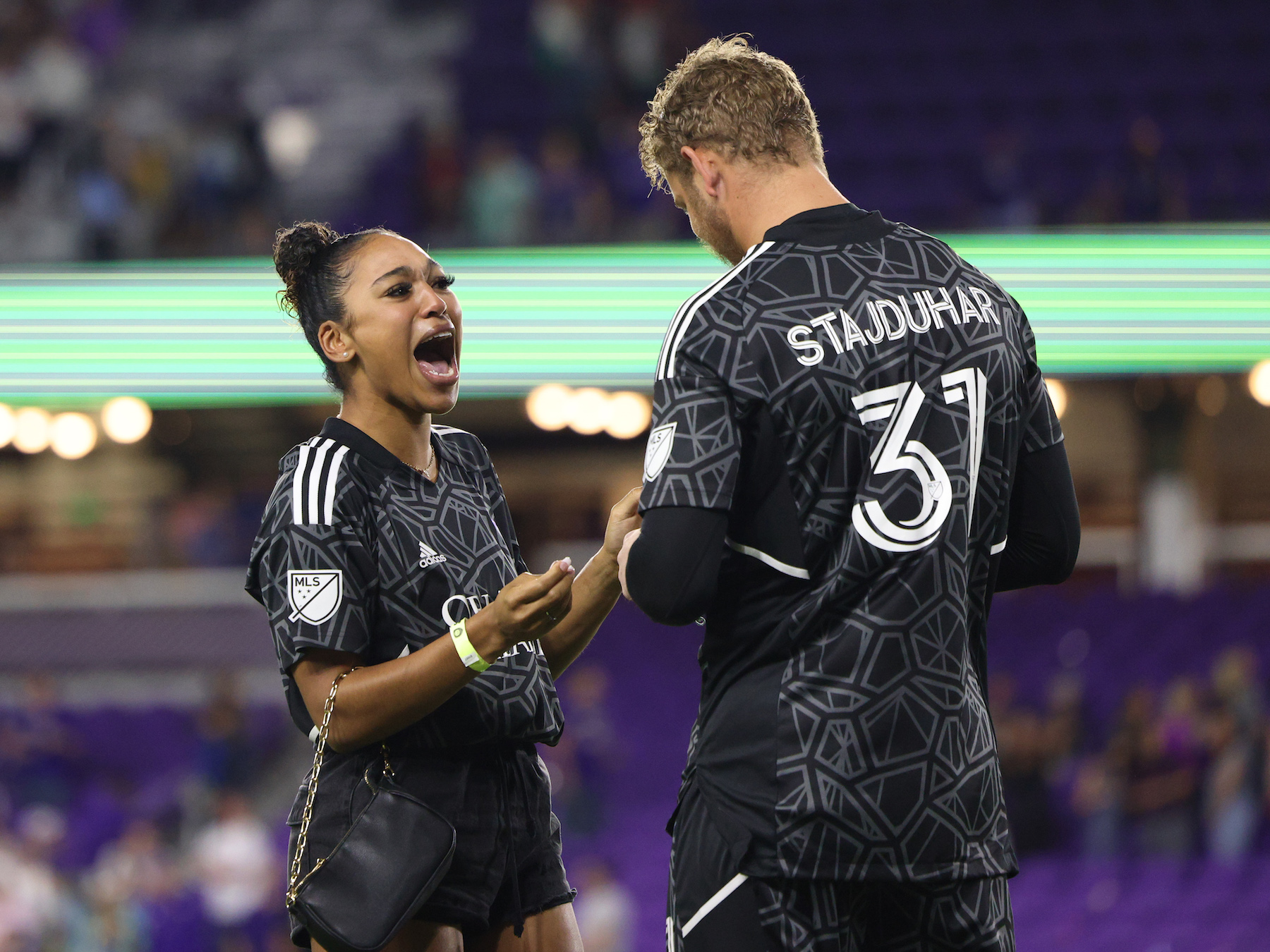 Loaned out for the first five of his years, a diagnosis of bone cancer in 2018 meant months of treatment and the fear that comes with serious illness. He met the challenge as he does most things – head on. He kept on training. And on June 20, 2018 he rang the bell at Orlando Health Pediatric Cancer Unit.

There was no cancer left in his body. And there’s none detectable to this day.

“Everything’s all good now, coming up on four years” he said of his fight with cancer and his clean bill of health in a 2022 where he’s made one MLS start and two more in the Cup – building on from six starts last season. “It made me really more mature and appreciative of the things in life – soccer for sure – and just more grateful in general.”

It’s impossible to know how things will go. Stajduhar will be the first to tell you that. But he’s continued his steadiness from last season and enjoyed a healthy pre-season for the first time since joining the club. And he’s getting good minutes (and wins), battling hard for the number-one spot with starter Pedro Gallese of Peru and, of course, Grinwis – who Stajduhar considers “a special guy” and “a huge mentor.”

With Oscar Pereja running the show as head coach, Stajduhar sees a possibility for hardware this year. “He wants trophies,” the goalkeeper said of the 2016 Open Cup-winning boss [with FC Dallas] – now in charge of an Orlando side sitting in fourth place in the MLS Eastern  Conference. “He instils a sense in us that we should be out there fighting for everything there is.”

Next up in the Cup is a date with Inter Miami – the MLS club founded in 2022 and owned by David Beckham. And it’s another home game for Orlando. “We want to be the best team in Florida,” said Stajduhar, who wants to set a date for his wedding sometime in 2023 but who can’t be sure he’ll be in the starting XI against Inter despite his Cup heroics thus far. “It’s the early stages of a rivalry and we’re all super competitive here.”

Stajduhar likes the extra fire of Open Cup play, where you need a winner and a loser on the day. No draws. No excuses. “Open Cup games are do or die and that really heightens everything,” said the man who was willing to roll the dice on proposing marriage after a deflating Cup loss at home – and who went on to fight like hell to make sure that wasn’t the case.

“It was definitely better that we won,” he laughed.

Tatiana may not be the most interested fan at Exploria Stadium on gameday – or too hung up on the ins and outs of the Open Cup. Stajduhar laughed once more when asked if his fiance is a huge soccer fan. “I’d say she’s not the biggest soccer fan; she’s more of a Mason fan.’