Read the latest in our ongoing Great Eight Series where we take a light-hearted Round-by-Round look at some of the magic moments of America’s favorite soccer tournament.
Jonah FontelaMay 14 2022
Open Cup

Fans of the 109-year-old Lamar Hunt U.S. Open Cup (in its 107th edition) live by its magic moments. And the Round of 32 of this 2022 competition tossed up a good few of those on May 10 and 11. Join usopencup.com for a look back at eight moments of note from 16 games in which 32 teams were evenly split between jubilation and despair. While some inspiring underdog runs came to an end, those curious third-division owls of Union Omaha are still flying. So are USL Championship sluggers Louisville City and Sacramento Republic – as are MLS’ Galaxy, where veteran Sacha Kljestan is playing proud papa to some LA child stars.

We humans are hung up on birds. Maybe it’s a basic jealousy of flight. Team-namers and logo-makers are more hung up than most. Some Round-of-32 birds were in descent. DC United, super-team of MLS’ early years who wear the undisputed symbol of American virility and ferocity, the eagle, hit a window again. The club’s most recent title of any kind came way back in 2013 (their last of three Open Cups). Phoenix Rising (yeah, we’re including mythical birds too) also saw their 2022 Cup come to an end. But Inter Miami, the lone remaining Flamingos after the elimination of Forward Madison, moved through to the Round of 16 with a win over a spirited South Georgia Tormenta – the lower league outfit from Statesboro with an Ibis, a marsh bird native to the American Southeast, prominent on their crest.

We'll travel to face @MNUFC in the @opencup Round of 16! 🦉💪#OneMeansAll pic.twitter.com/NqCO3UizS2

But what about Union Omaha? It’s their first year in the Open Cup but they’re wise old Owls already, keen and warmed in the springtime sunsets of the Nebraska plains. Their captain Conor Doyle won an Open Cup (uh huh, with DC United in 2013). The owls now meet (you guessed it) the Loons of Minnesota United in the Round of 16 – the farthest a USL League One Team has ever flown. But they should take care, for as ferocious as a hunting owl can be, the lean and leggy Loon feasts on underdog blood. Just ask New Mexico United, who, with dreams of glory, were eviscerated in St Paul in 2019.

Love in the Orlando Air

Mason Stajduhar was among the heroes for 2019 Semifinalists Orlando City – his save of Kai Wagner’s header near the end helped see the Floridians past Philadelphia Union. That would have been enough for one night, but Stajduhar, who battled to beat bone cancer in 2018 (and probably knows the value of not wasting any time when you know what you want) got down on one knee after the final whistle. In front of the adoring home fans, he proposed marriage to his girlfriend Tatiana. How could she say no to an Open Cup hero? “She said yes!” enthused Stajduhar, who stashed the ring for safe keeping with the club’s trainer. “I was more nervous than before the game, but she said yes.”

Nothing is more romantic that #USOC2022 #VamosOrlando

There’s just more fire in a Cup game. Ask any coach, any player ever involved. There’s no tomorrow if you show up half-cocked. The fight is today – a reassuring binary in a time of multiverses. That no-draws-allowed dynamic is the cause of some astonishing comebacks and horrible collapses, which, of course, are one in the same. Four-time champions Sporting Kansas City were dead and buried after conceding twice to FC Dallas early. Seven minutes into second-half stoppage time they still trailed by one. Only a cushioned header in the 98th minute from Marinos Tzionis forced extra-time and a dramatic 4-2 turnaround. Over in Nashville, the equalizer came in the 92nd minute of regular time via CJ Sapong. Ethan Zuback later completed the fightback to heap more woe on 2019 champs Atlanta United -- who lost U.S. Men’s National Team star Miles Robinson to yet another serious injury last week.

Still singin' in the @opencup pic.twitter.com/VjWtsWancx

There were other comebacks in the Round of 32. Less dramatic, sure, but noteworthy all the same. The 2007 Open Cup-champion New England Revolution won 5-1 (!) after going down to FC Cincinnati early. And let’s not forget twice champions LA Galaxy, who crawled back from a goal down against refreshing third-division debutants Cal United Strikers. 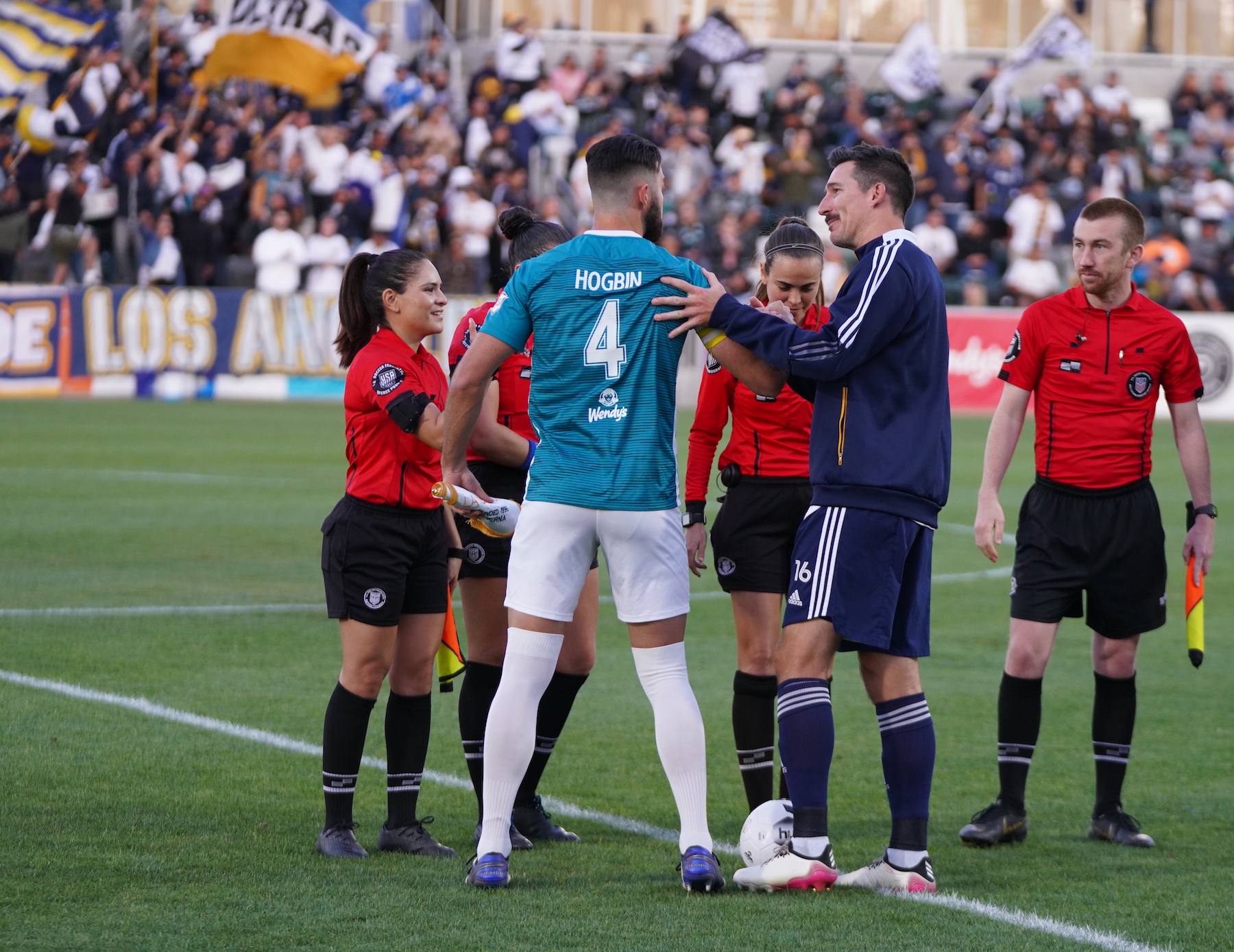 We see you, Sacha Kljestan. We see what you’re up to. We know you love the Open Cup and are sure to remember the tales passed on by your college coach Manny Schellscheidt – a winner back in the rough-and-tumble days of the early 1970s. There’s something very satisfying about watching the 36-year-old schemer, the winds of a career-autumn gathering around him, in among an LA Galaxy team of energized super-pups. One of the most talented (and underrated) American players of his generation, he’s knit the patterns two rounds running now. Up against the Cal United Strikers of NISA, who started four teenagers (one still just 15), Kljestan was the only player on the field over 30 (and only one other was older than 25). When his 22-year-old teammate Dejan Joveljić was fouled in the area on the stroke of halftime, Kljestan grabbed the ball and put it under his arm. It wasn’t greed. Nor arrogance. No way a power play. It was a protective instinct – like those of the best teachers, coaches and parents. He gave Joveljić an out in case he was too nervous to take the spot-kick with his team trailing after 44 minutes and facing a possible embarrassing upset. Kljesten did that not once, but twice. And Joveljić buried them both from the spot while a dramatic sunset bathed the pitch in Irvine longer than it should have – as if interested, somehow, in the outcome.

It was a case of Open Cup déjà vu for Cities Louisville and Detroit -- both with the fleur-de-lis incorporated into their crest and among the best the second-division USL Championship has to offer. Six years ago, when Detroit City were still amateurs in the NPSL, the two teams met in the Second Round of the 2016 Open Cup (the only other time the now-league mates have ever played). The starting goalkeeper for DCFC that day, making his club debut, was one Nathan Steinwascher. And he’s still between the posts today. He rose with his hometown club through the ranks from amateur, to third division (NISA) and now to the USL Championship. This second meeting went to a shootout – same as last time. And as the Open Cup can be romantic, it’s downright cruel just as often. Try as he might, and how the home fans smelling a place in the Last Sixteen pushed him on, it wasn’t meant to be for this Michigan hometown hero born and bred just up the road from Hamtramck. Just like 2016, it was a defeat for the Detroiters.

It might just be the start of a Louisville City run to glory. “I match us against any team in the country,” said coach Danny Cruz, a losing Open Cup Finalist in his playing days. The Kentucky men are just four wins away from becoming the first non-MLS team since 1999 to win an Open Cup.

They say that numbers don’t lie. But that, dear friends, is itself a lie. So we’ll focus on the numbers that do matter, even if they don’t tell the truth, the whole truth and nothing but. We saw 56 goals fall in this round. That’s an astonishing 3.5 per game. Not one of those 16 games ended 0-0 through 90 minutes of play – and only five of the 32 teams failed to score (we won’t name names). The only hat-trick was scored by the soft-spoken Carles Gil, New England Revolution’s 2021 MLS MVP and a player of astonishing talent. Atlanta United’s reign as Open Cup holders finally ended at 988 days (the longest in history thanks to a two-year pause for Covid). And how about what went down at Minnesota United’s Allianz Field in the game between the hosts and the Colorado Rapids? Halted in the 17th minute on Wednesday due to heavy weather with the scores tied at 1-1, the players retreated first to the locker rooms and then to bed. They picked up the game (via drop-ball) in the 18th minute some 36 hours later (that’s over 2000 minutes, folks). The Open Cup has had some marathon games, but this one takes the cake.

I've seen it rainin' fire in the sky... pic.twitter.com/O16WVf4VGQ

Speaking of marathons, the clash between the Seattle Sounders and San Jose Earthquakes needed eleven rounds of a penalty shootout before it could be settled. Just days after the Sounders became kings of CONCACAF in front of 70,000 fans at Lumen Field, they lined up at their early-round Open Cup homebase of Starfire in Tukwila (capacity: 4500). The dense forest that surrounds the complex was witness to 120 minutes of regular and extra time that ended 2-2. The rain-soaked shootout went all the way to the keepers, with Seattle’s Stefan Cleveland’s effort saved by San Jose’s Matt Bersano. That same man then stepped up to slam the winner home. A back-up at the club since 2017, Bersano’s heroics prove yet again that the Open Cup favors the brave, the patient and those ready to meet the moment.

This is the hard part. And we do mean it. We can’t help but be wistful for the loss of Cal United Strikers, who got up early on the Galaxy and were a few bounces away from pulling off a monster cupset. Detroit City, you wild ones, it was one hell of a ride. Never do change. South Georgia Tormenta were better than Inter Miami for large chunks of the game, but mistakes and missed chances are the heart-breaking bread and butter of our Cup. The Kickers – a long way from the team that lifted the Cup in 1995 – showed that Richmond, Virginia still has soccer in its veins. On the other side of that coin, the debutant Hailstorm out of Fort Collins, Colorado – who rained on a few parades this year – won’t ever be underestimated again.

❤️ RIP #ST23 Our teammate, friend, brother @sainclairtueno
We send our sincerest condolences to his loved ones.
We love you and know you will always be with us 💚 @ussoccer @NPSLSoccer @opencup @USLLeagueTwo pic.twitter.com/3AOTNIyqU1

We close the round with one last goodbye. Our thoughts, prayers and solidarity go out to the family and friends of Sainclair Tueno, who succumbed to injuries suffered after being struck by a car in March. As a member of the FC Motown family, and our larger Open Cup family, we’ll remember you here.