Join usopencup.com for a look back at the six previous Metro New York derbies of the last 25 years before the New York Red Bulls and NYCFC face off in the 2022 Quarterfinals.
Michael LewisJune 14 2022
Open Cup

On June 22, one of the most anticipated matches of the season in the New York metropolitan area will take place in Harrison, New Jersey: The New York Red Bulls v. New York City FC – in the Lamar Hunt U.S. Open Cup Quarterfinals.

"I’ll be super excited," Red Bulls defender Dylan Nealis said. "I’m used to watching them, watching my brother [Sean] play in them. I can feel the intensity just from watching it on TV. So to be a part of one, I can’t wait."

Tickets will go on sale at 10:00AM on Wednesday, June 1 🎟 pic.twitter.com/mzwnE5lfwq

"These are very special games and now it’s the Quarterfinals," he said. "It adds a little bit more to it. We just have to try to go there and play our game…stay focused on how we want to play.”

While the two clubs tussle twice a season in MLS, Open Cup confrontations between rivals in and around the Big Apple don't come along as often.

Over the past quarter century, metro area teams have met six times in the competition. Join usopencup.com for a short history of those encounters:

Part I came in a July 30 friendly between the New York/New Jersey MetroStars (now the Red Bulls) and the upstart Long Island Rough Riders, who were champions of the U.S. Interregional Soccer League in 1995.

In front of a capacity crowd of 11,658 at Hofstra University in Hempstead, New York, the Rough Riders had their way with the MLS side en route to a 2-1 victory. Utilizing their regulars, the hosts were paced by Saul Martinez and Flavio Ferri, who scored against goalkeeper Zach Thornton. Shaun Bartlett tallied late for the MetroStars, who used mostly reserve players.

Not wanting to duplicate history in the Open Cup Quarterfinals, the MetroStars vetoed several playing sites on Long Island before both clubs agreed to play on a grassy field at Stony Brook University in Stony Brook, New York and a rare 4:30 p.m. Tuesday kickoff. 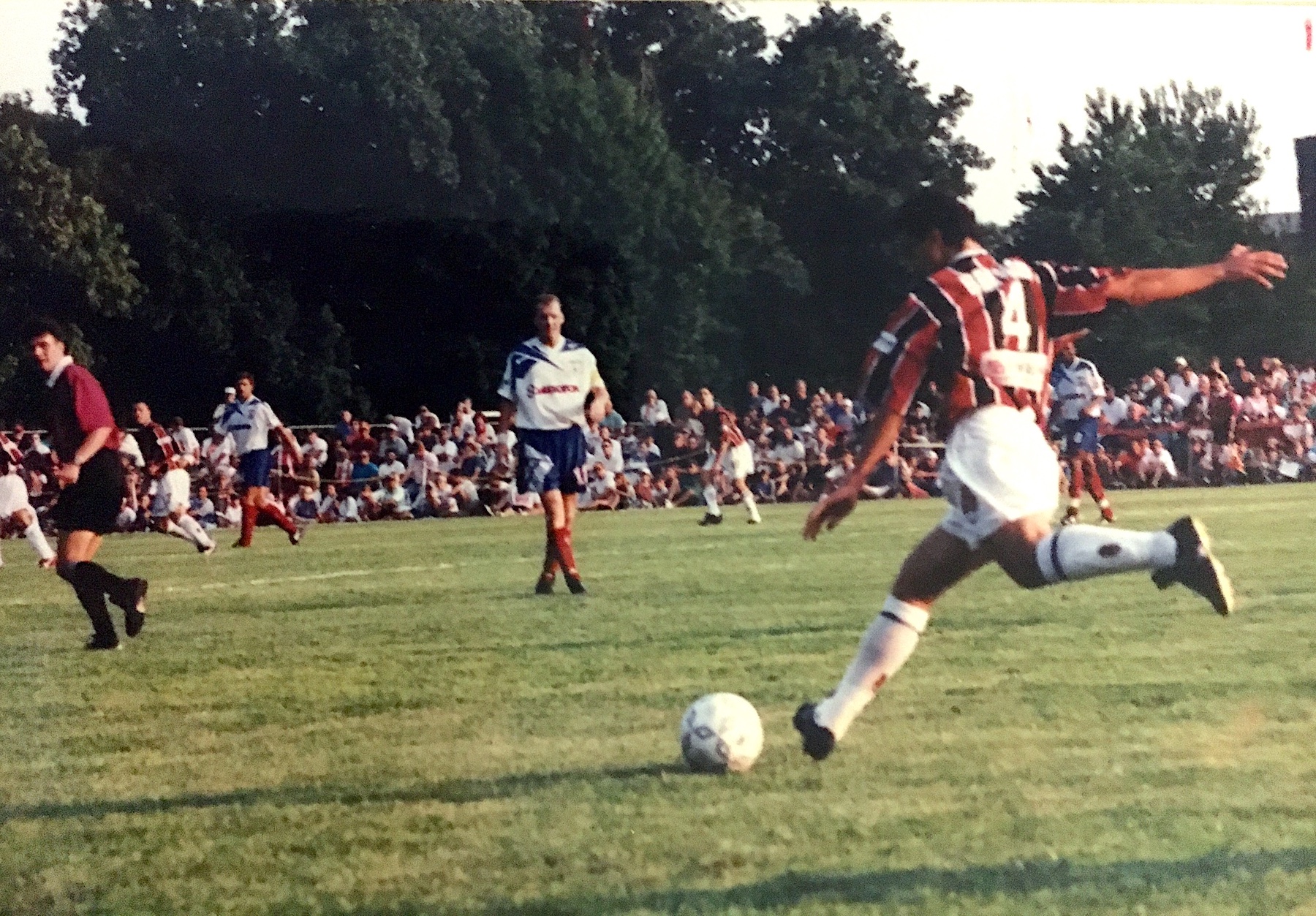 The teams battled to a scoreless tie in regular time as MetroStars and U.S. Men’s National Team goalkeeper Tony Meola made several outstanding saves. "You couldn't tell which team was an MLS team at the time. With the exception of Tony Meola, that game would have been ours, for sure," Riders midfielder Jim Rooney said.

Italian international midfielder Roberto Donadoni set up the Golden Goal after the Riders' Tom Lips fouled Brian Kelly in the left corner in the 105th minute. He drove his free kick to defender Rhett Harty, who headed it past goalkeeper Manuel Carou.

"Roberto [Donadoni] hit a great cross and I was able to flick it on. I didn't really get a good shot at the ball," Harty said then, adding that he wanted to head it in another direction. "I don't care where it went as long as it went in."

In their second season back after a 29-year hiatus, the New York Cosmos, competing in the second division North American Soccer League (NASL), felt they had much to prove against an MLS side.

The reigning NASL champions did so and stunned the Red Bulls (3-0) to win the Fourth Round match before 9,364 fans at Hofstra University.

"Unbelievable, 3-0 against the Red Bulls is unbelievable," Nosseli said at the time. "I don’t know in the future, but today maybe we are the best team in New York." 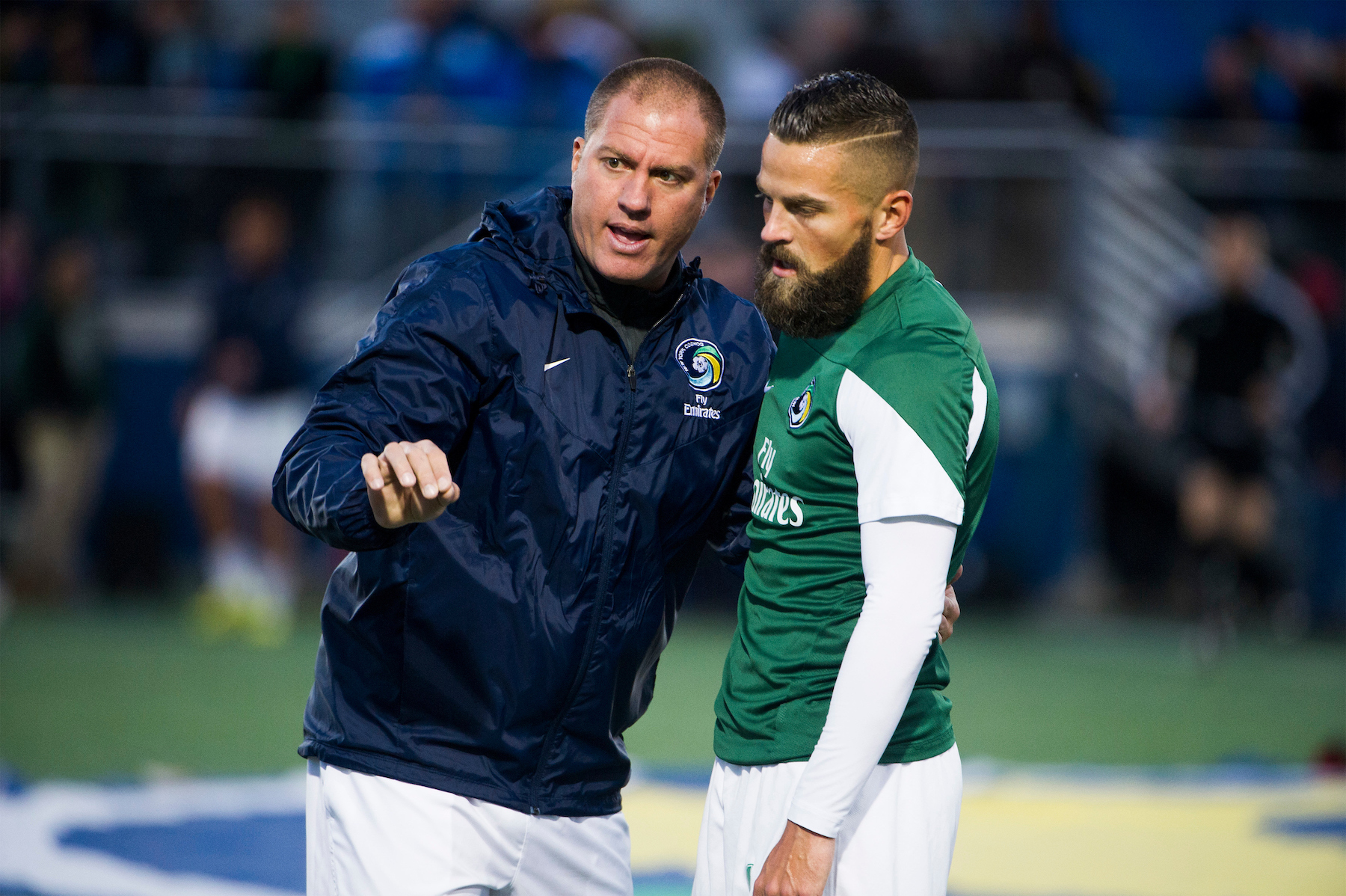 He got no argument from his coach or his teammates. "Today was a complete performance," said Cosmos manager Giovanni Savarese, who now coaches in Major League Soccer with the Portland Timbers.

“I don't think they were expecting so much from us," added Cosmos midfielder Sebastian Guenzatti. "They didn't know the talent we had in this team and the effort. Everybody was a gladiator today."

Stokkelien gave the hosts all the scoring they needed in the seventh minute off a long ball by captain Carlos Mendes before beating goalkeeper Ryan Meara. Stokkelien added a spectacular strike in the 73rd minute, volleying home Danny Szetela's cross from the right side.

"The only excuse I come up with is, this was the World Cup to them [the Cosmos], and my guys didn't view it that way," Red Bulls head coach Mike Petke said. "But hats off to them."

This match between the Cosmos and New York City FC had a little bit of everything for the 11,426 fans at Hofstra – from momentum switching to dramatic goals and goalkeeper heroics in the shootout.

NYCFC grabbed the lead on Kwadwo Poku’s brace (24th and 59th minutes). The Cosmos rallied with a pair of second-half goals, including Leo Fernandes’ 65th-minute effort and a dramatic equalizer by Lucky Mkosana in the 90th minute.

The MLS side were awarded a controversial penalty kick in the first extra-time period but Pablo Alvarez rattled his attempt off the crossbar. 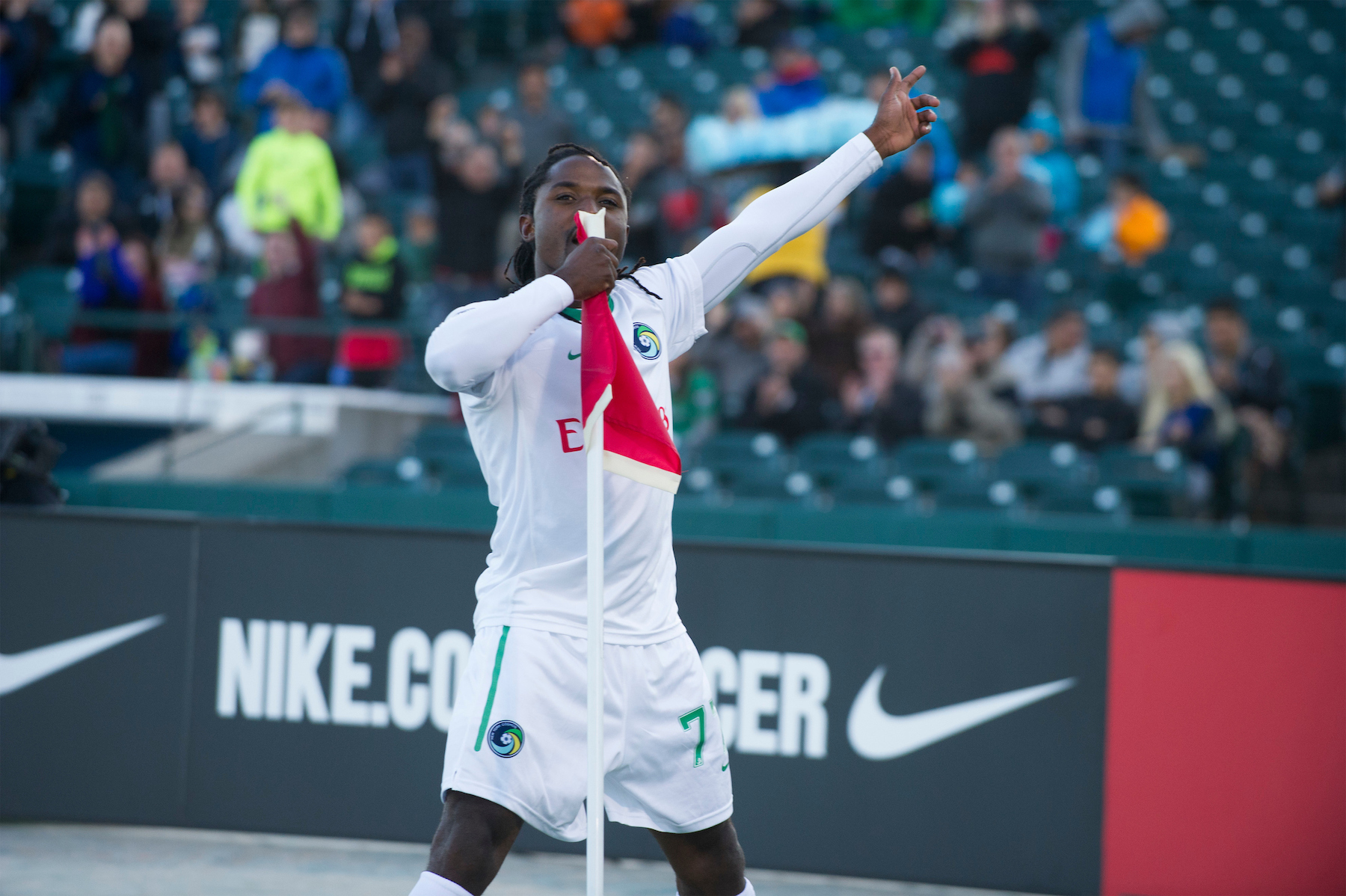 Lucky Mkosana of the Cosmos

After playing to a 2-2 draw after 120 minutes, the Cosmos prevailed in penalty kicks. Mauer made three saves and Hunter Gorskie converted the game-winner as the hosts won the tie-breaker (4-3). “We’ve done it time and again,” Gorskie said. "This team just has tremendous belief. We just use that no matter what the situation is.”

Stokkelien, Mkosana and Adam Moffat also put their attempts away for the Cosmos. Hunter Freeman had his try saved and Fernandes’ shot sailed over the bar. "Sports is a confidence game, a rhythm game," Mauer said. "Getting those saves kept us in it to get to that point. Any time as a goalkeeper you get to PKs, you're excited. Finally a chance to be the hero instead of catching all of the blame."

And Mauer did  play the hero, all right. In the shootout, he punched away Ned Grabavoy's attempt, stopped Patrick Mullins' try and made a save on the MLS team's final spot kick by Shay Facey.

As time was running down in regulation, Danny Szetela admitted to himself that he was tired and wasn't about to play a half hour of extra-time.

So, he did something about it – connecting on a dramatic header in the 88th minute to boost the Cosmos to a 1-0 win over NYCFC in the Fourth Round at Jack Coffey Field at Fordham University. "I looked at the clock. My legs are tired," he said. "I'm not going to overtime. The next time the ball gets out wide, I'm going to make that run that I always make down the middle."

The Cosmos eliminated an MLS team from the competition for the third consecutive year. "We want to be the kings of New York," Szetela said then. “It's a great feeling." 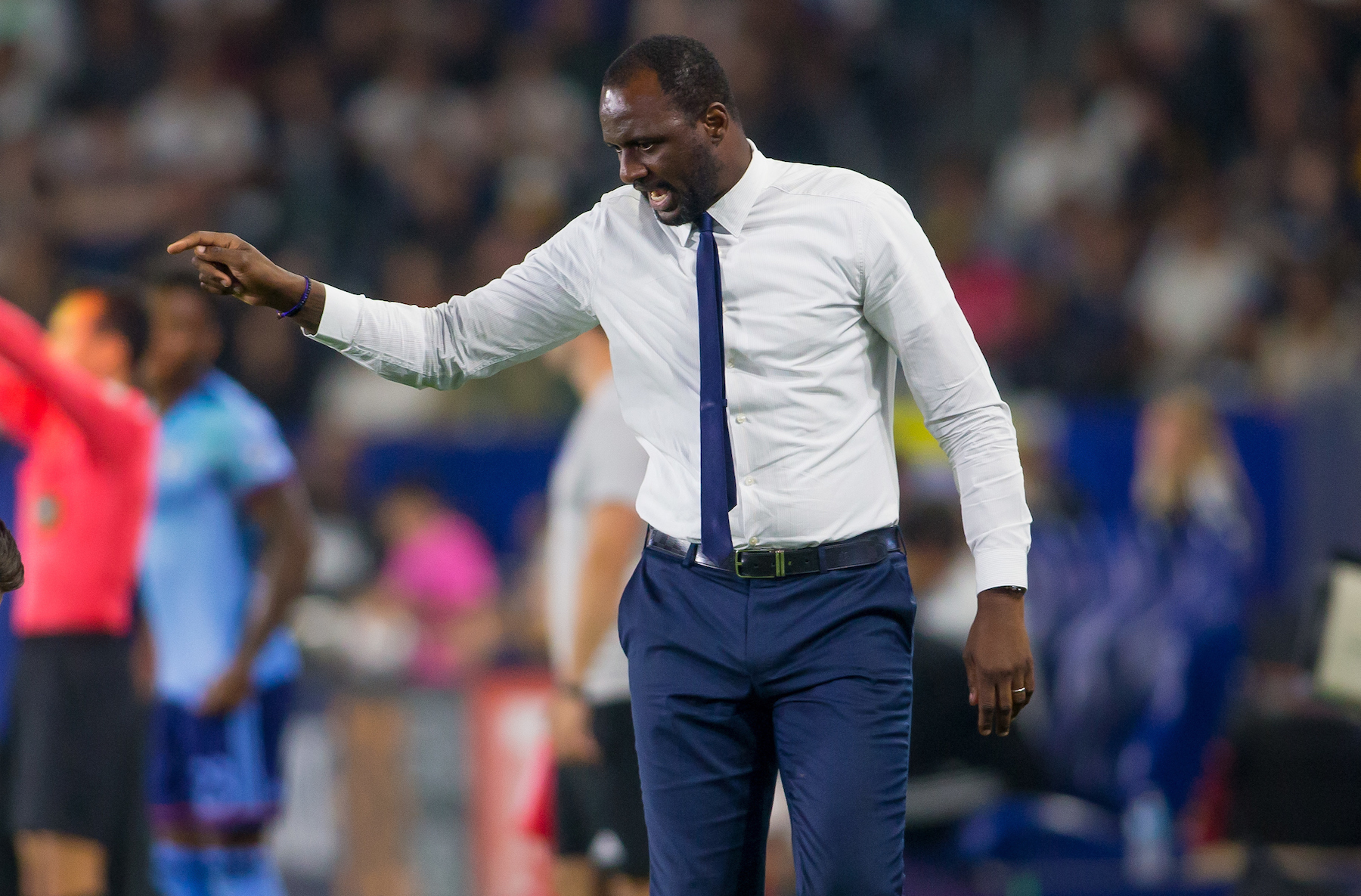 The game-winner started on a City turnover. Moffat started the counterattack with a pass to Yohandry Orozco, who bolted down the field. Orozco crossed the ball to Szetela at the right post and he headed home from point-blank range past goalkeeper Eirik Johansen.

If Szetela made the attacking play of the match, Freeman made the outstanding defensive effort in the 73rd minute – when he slid to save an open-goal effort.

Then NYCFC head coach Patrick Vieira felt his forwards (Khiry Shelton, Patrick Mullins and Poku) let him down. “I gave some players a chance to perform, to show me they deserve to play more, and they didn’t show it today,” the French FIFA World Cup winner said. “That’s why I’m quite really frustrated because of the trust I had in them. I didn’t get it back. It’s difficult for me to accept.”

In the first Hudson River Derby in the Open Cup, the Red Bulls got the better of NYCFC with a 1-0 win in the Fourth Round at Red Bull Arena.

Assistant coach Chris Armas ran the team while head coach Jesse Marsch served a one-game suspension due to an incident in the 2016 Open Cup. “It was business as usual,” Armas said. “It wasn’t about me; it was about the guys tonight.” The Cityzens dominated the first half, but a calf injury to diminutive playmaker Maxi Moralez turned the tide for the hosts over the final 45 minutes. Daniel Royer tallied in the 67th minute past keeper Sean Johnson and Meara earned the clean sheet.

“I tried to go out onto the field and help the team,” said Royer who did his part as the Red Bulls stormed through to a runner-up finish in that 2017 Cup . “I tried to be dangerous, tried to be shifty and a person that could be an option offensively.”

“They took their chances,” added Vieira, disappointed again. “We didn’t take our chances. In a game like that if you don’t take your chances, you can get punished.”

In the most lopsided result of the Open Cup derbies, the Red Bulls rolled to a 4-0 win in the Fourth Round in front of a crowd of 9,496 at Red Bull Arena.

Vincent Bezecourt scored two minutes in to start the rout. Aaron Long then added a 52nd-minute goal before Royer struck for a late brace (87th and 89th minutes).

"It was a great night," said Meara, who secured the clean sheet. "This tournament means a lot to us. It’s a chance to win a trophy. Being so close last year [when the Red Bulls lost in the Open Cup Final to Sporting Kansas City]...that sticks with us.” 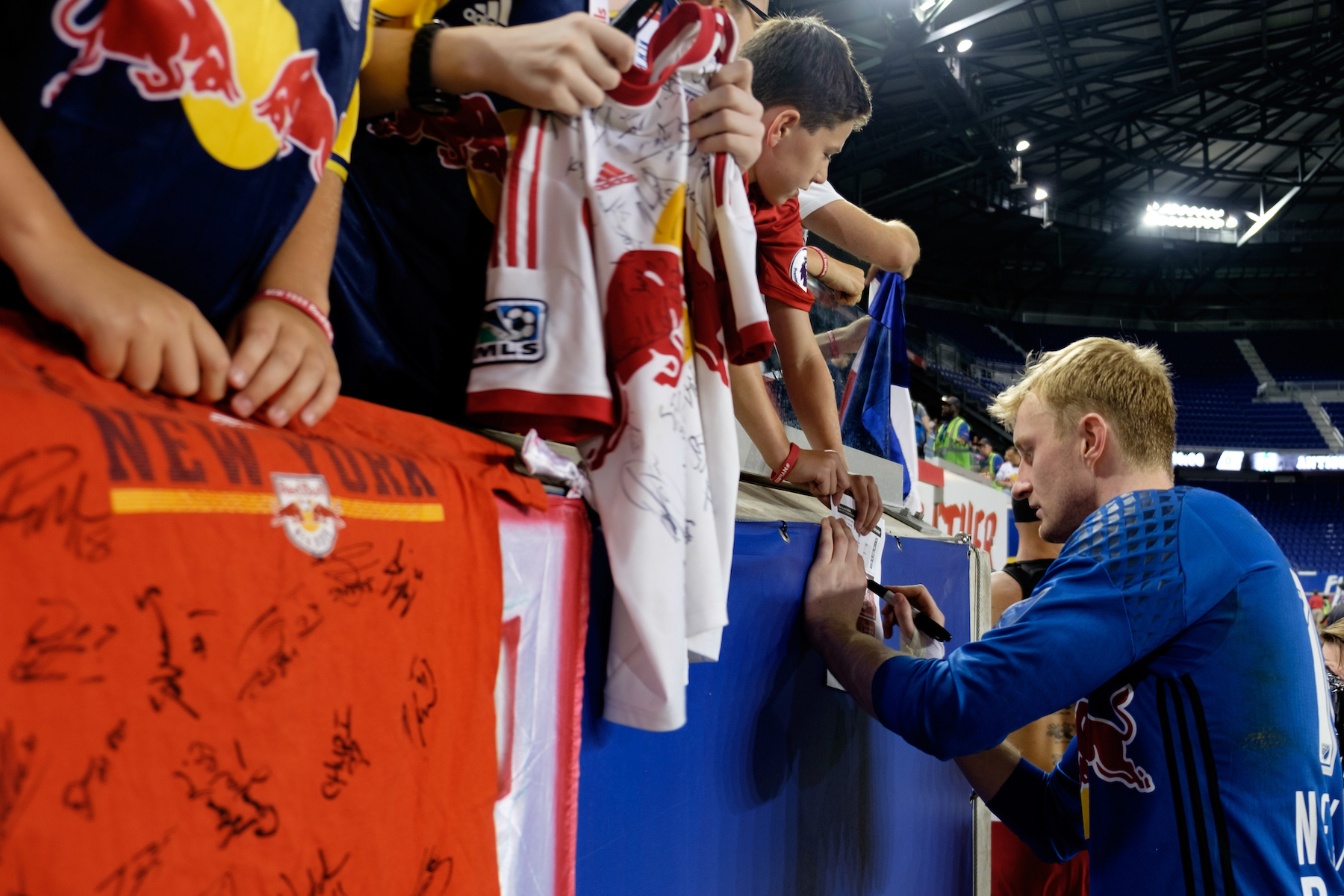 “Look at the defense between the two teams," said Vieira. "Both teams had players who didn’t play often, but they look more sharp than us. The reason is they have the B team [that] allows those players to play every week. It was quite difficult for [our youngsters] because they didn’t play so many games.”

One young player did play as 15-year-old Joe Scally (now with the USMNT) made his professional debut when he replaced former Spanish international and World Cup winner David Villa in the 57th minute.

Who will prevail in the latest chapter of the Open Cup’s version of the Hudson River Derby? If history is any guide, it sure will be fun to find out. So tune into ESPN+ on June 22 at 8 p.m. ET.