Open Cup REWIND: A Rough Ride for the ‘97 MetroStars

Ahead of a fourth Open Cup version of the Hudson River derby between NYRB and NYCFC, usopencup.com dials it way back to the first New York metro area clash of the Open Cup’s Modern Era.
Michael LewisJune 14 2022
Open Cup

Slowly but surely, fans ambled over to the open soccer field on a hot Long Island afternoon in August of 1997.

Some spectators sat in the college field’s metal bleachers. Others brought portable chairs to stay comfortable with some food and drink. Some fans chose to stand to get a better view while youngsters sat as close to the roped-off playing field as they could for an up-close-and-personal view of their heroes on this festive occasion.

It was, believe it or not, a Lamar Hunt U.S. Open Cup Quarterfinal between the Long Island Rough Riders and New York/New Jersey MetroStars (now the New York Red Bulls). It was a game mired in controversy even before the first ball was kicked at SUNY-Stony Brook that day – and a throwback to simpler times.

"The Open Cup is a special tournament and gives the opportunity in its purest form for the amateur teams, or the lower division clubs, to play against the big clubs," former Riders head coach Alfonso Mondelo told usopencup.com. "Those games were massive for us. They made the seasons for our players.

David for the People

“It was a David v. Goliath kind of thing,” Mondelo added. “When David wins, then people are happy."

This was a slightly different type of David v. Goliath confrontation. In its second season, Major League Soccer (MLS) had only 10 clubs and still was trying to find itself. And there was plenty of talent in the A-League (where the Rough Riders played) that deserved a chance in the first division

"It was a blurry line between their best teams and our mediocre teams, maybe all of our teams," former MLS commissioner Doug Logan said. "There wasn't a huge amount of distinction in those early days when we were playing. I don't think I'm talking out of school that some of the play [in the early MLS days] was a little ragged." 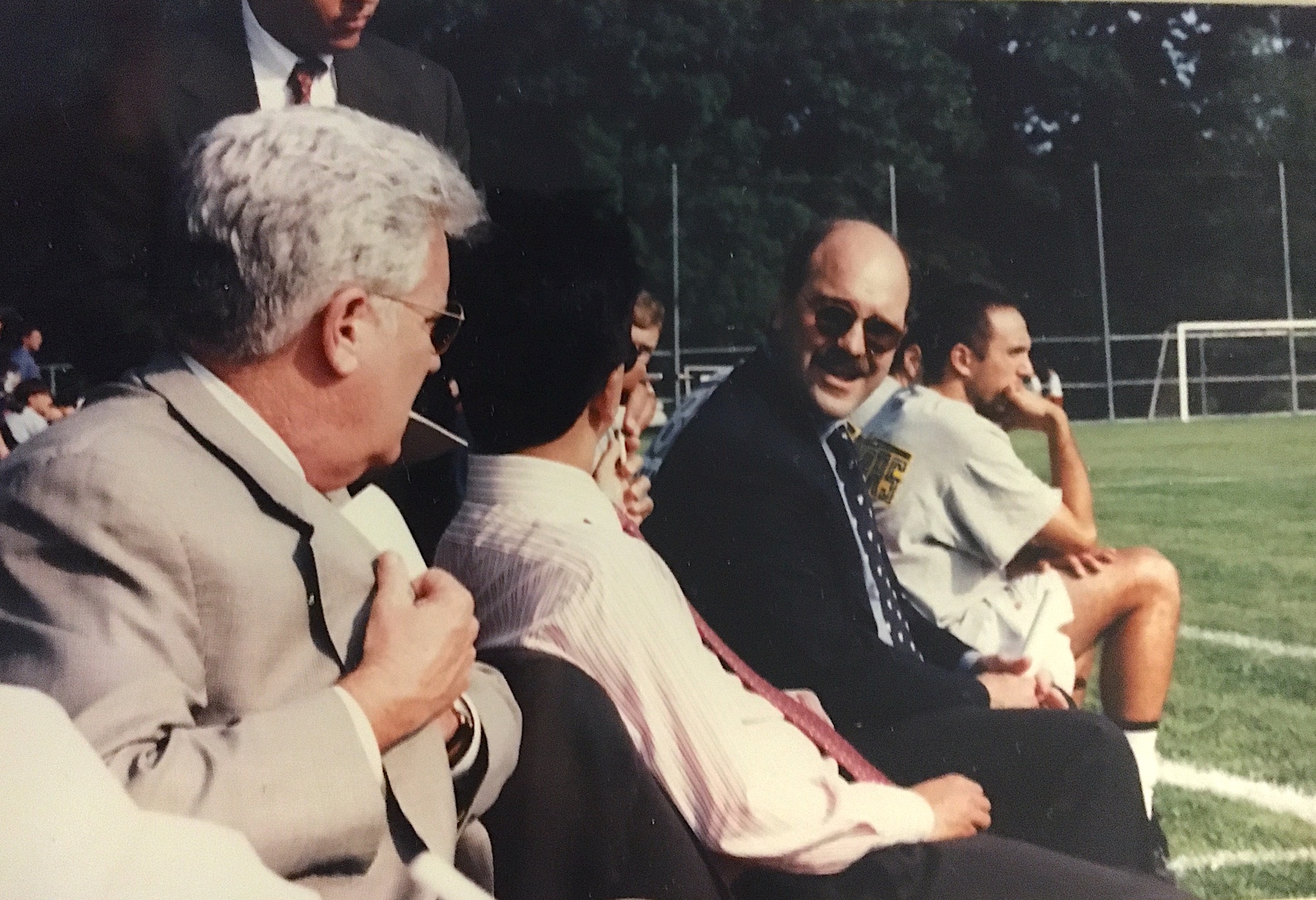 In only four years of existence, the Rough Riders had established themselves as one of the best lower-division clubs in the country. They reached the 1994 U.S. Interregional Soccer League semifinals and won the 1995 title behind the likes of future internationals Tony Meola, Giovanni Savarese and Chris Armas.

The MetroStars reached the 1996 MLS playoffs but were struggling to duplicate the feat with their third coach in two seasons – Carlos Alberto Parreira, who guided Brazil to the 1994 World Cup title in the USA.

Tough Away Day for MLS’ Metros

"We were the devil on the day, if you will," Meola, the 100-times capped American goalkeeper, said with a laugh. "We were the team that was coming in as maybe the higher rated team or the one that got more attention.

"I do remember there being a lot of hype around,” Meola added. “There were a lot of guys there [with the Rough Riders] who thought or imagined they should be with our team."

The Riders were riding high that summer.

In a July 30 exhibition game aptly named ‘The Grapple For the Apple’ against the MetroStars at Hofstra University to promote the sport, they prevailed in a 2-1 victory before a near-capacity crowd of 11,658. Using their regulars, the Rough Riders were bolstered by Saul Martinez and Flavio Ferri, who found the net against goalkeeper Zach Thornton. Bartlett tallied late for the losing MetroStars, who primarily used reserve players. 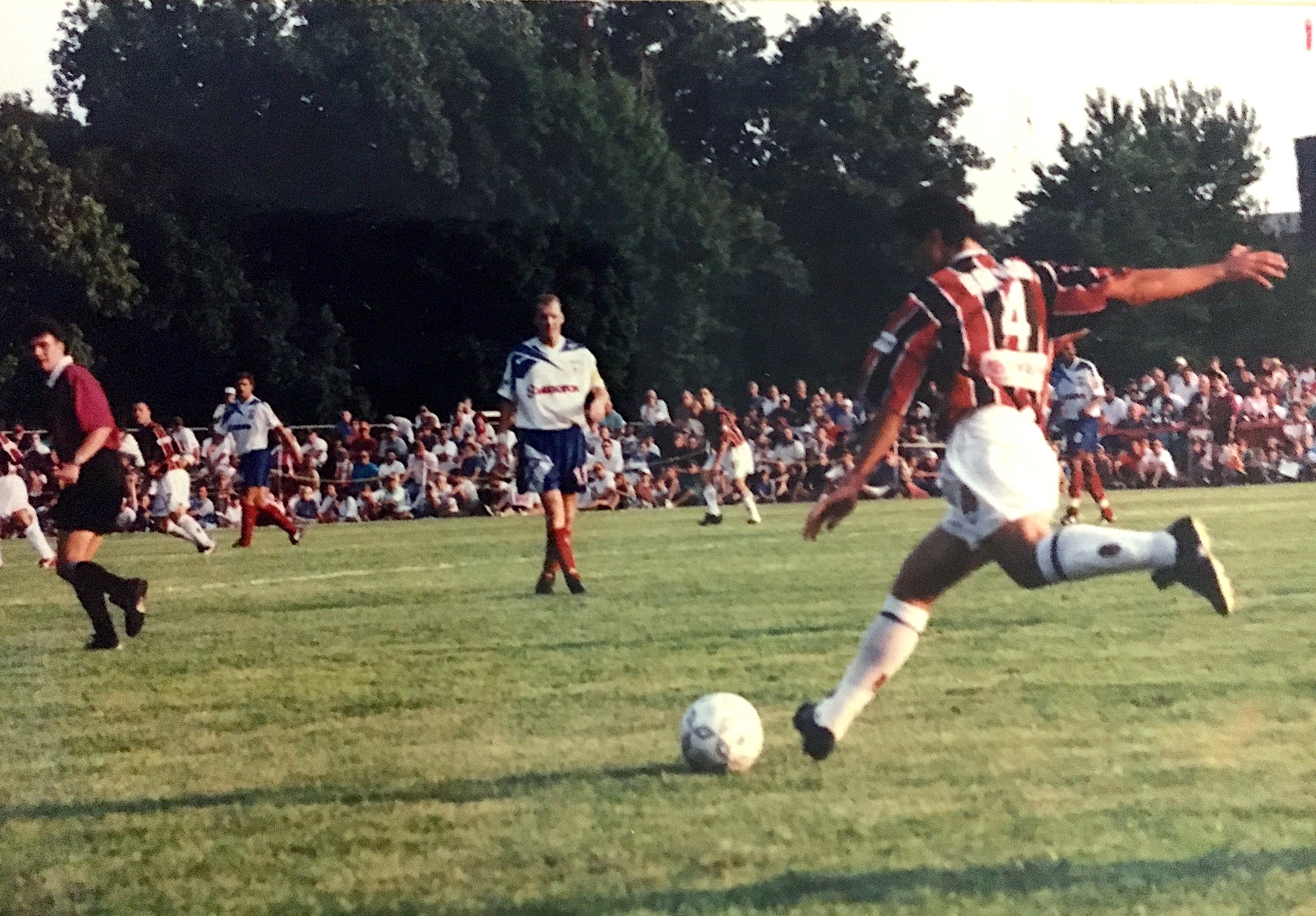 "It was tremendous," Mondelo said. "We demonstrated how to play with composure against an MLS team."

Goalkeeper Manuel Carou added: "In a friendly like this, the team from the lower level usually plays better, trying to prove something."

Two days later, the Rough Riders had more to prove against the New England Revolution in an Open Cup Third Round match at a neutral site – Willow Brook Park in New Britain, Connecticut (the Revs had refused to travel to Long Island). U.S. international Joe-Max Moore scored once and set up two goals to give New England a 3-1 lead in the 50th minute. But Jim Rooney took center-stage after that, scoring off a 25-yard free kick in the 75th minute and firing home a Martinez feed from about the same spot four minutes later. In the 108th minute, defender Dahir Mohammed headed in a Rooney corner kick for the Golden Goal and an improbable 4-3 triumph.

“We felt really good about ourselves," Rooney said.

That set up another clash of the metropolitan area sides, this time for much more than bragging rights, with a trip to the Open Cup Semifinals at stake. The Rough Riders were designated hosts and that's when headaches began.

The MetroStars turned down just about every Riders' nomination for a venue. That included Hofstra, which had artificial turf. The MLS side had played its opening four months on natural grass at Giants Stadium before the gridiron football Giants and Jets changed the venue back to fake grass for their respective seasons. The MetroStars did not want to play at the scene of the July 30 crime, so that was out of the question. 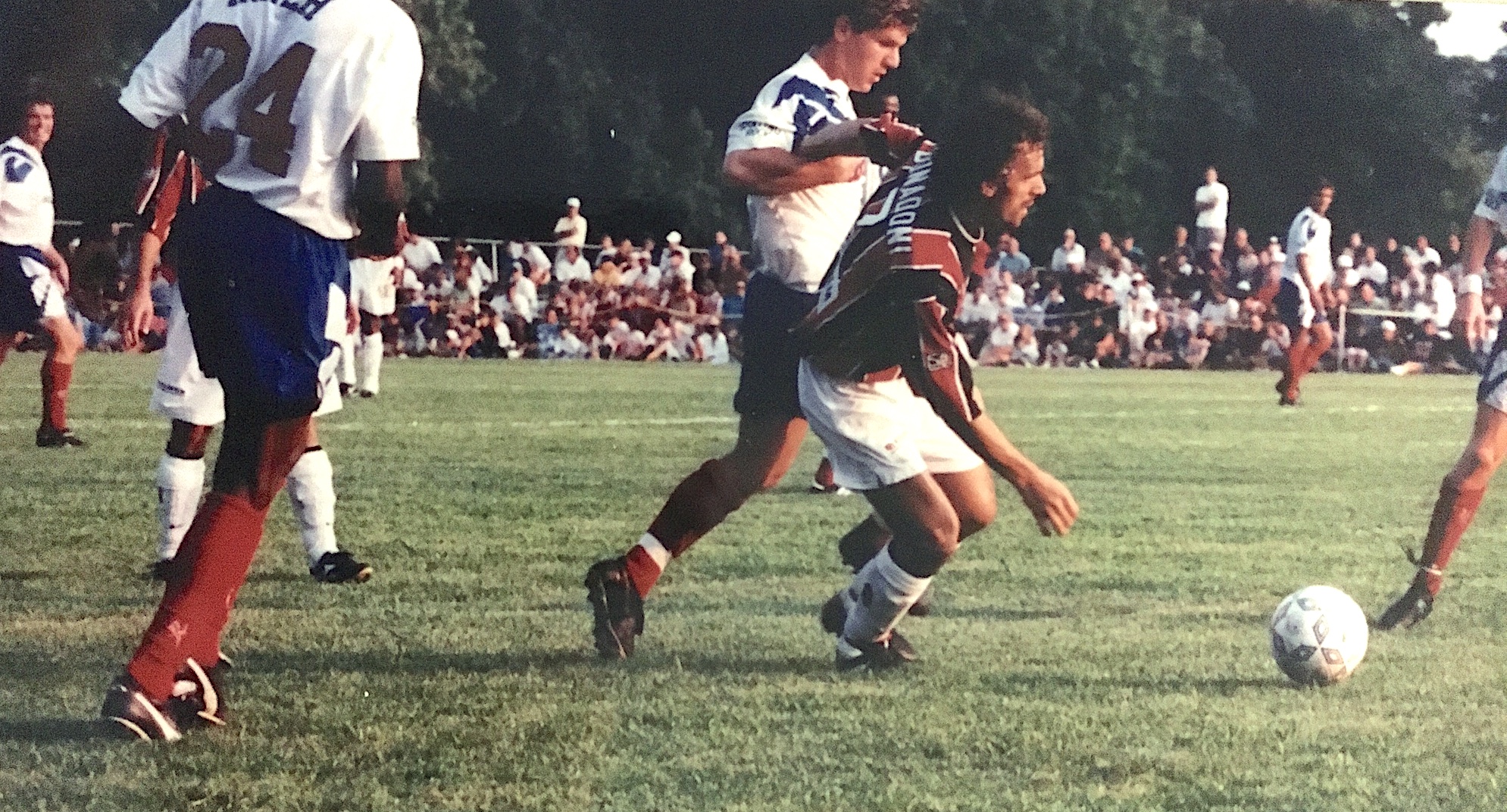 There weren't many viable sites on Long Island as the rejections piled up.

The Riders offered the U.S. Merchant Marine Academy in Kings Point near the Nassau County-New York City border, but the MetroStars said the field was too narrow. Long Island wanted to play at Adelphi University, training site for the Greece national team during the 1994 World Cup, but the MetroStars nixed it because the available August 27 date was too close to their home game against the San Jose Clash on the 29th.

Finally, Stony Brook, some 48 miles from the Nassau-Queens (New York City) border, was chosen as the venue with an unusual 4:30 p.m. kickoff on August 26th.

"We always thought having it out there, it would bring less of their fans," Rooney said. "Little things like that showed you how good we were. We put a little bit of a scare in them after the New England game. They tried all the tricks in the world.”

Meola figured the MetroStars were in for a long game.

"It was like getting on the field with a bunch of your buddies," said Meola, who backstopped the Riders to the 1995 USISL title. "But it was intense. I don't think we thought it would be anything else because clearly they had some really good players. There was a history of winning in that organization and they took pride in winning." 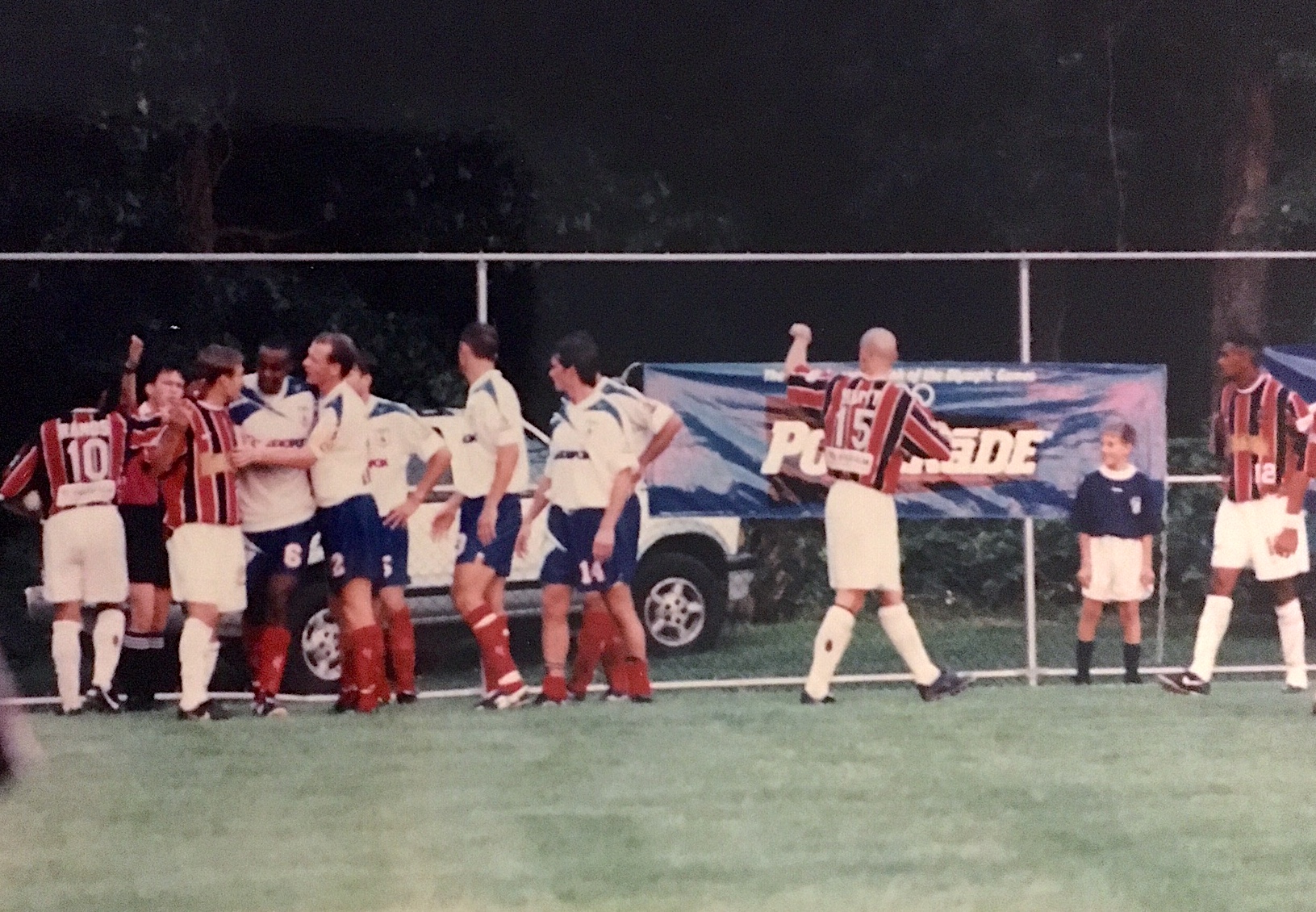 With fans crowding the sideline, the Stony Brook pitch was a surreal sight that day.

The crowd was pro-Riders, though it was one-tenth the size of the ‘Grapple’ match. "It was a raucous crowd," Mondelo recalled. "It was a special environment because the people who were there were really engaged. Post-match, the people coming onto the field, it was a little bit of a playing-in-a-park kind of thing."

Donadoni, who starred with A.C. Milan in some of Europe’s storied stadiums, couldn’t believe the MetroStars were participating in such conditions.

"I vaguely remember having a conversation with Roberto, how the fans could be so close to you," Meola said. "They could almost jump on the field. He had never been in anything like that before, whereas, for us, it was a little bit more normal because a lot of kids have played in college before."

"One reason he accepted coming to MLS and playing in New York was the ability to live in Manhattan because he was a great patron of the arts and spent a lot of time in galleries and museums,” he said of one of MLS’ early global stars. “We were talking about art and a specific art show. I gave him a tip of where to go. We didn't talk soccer." 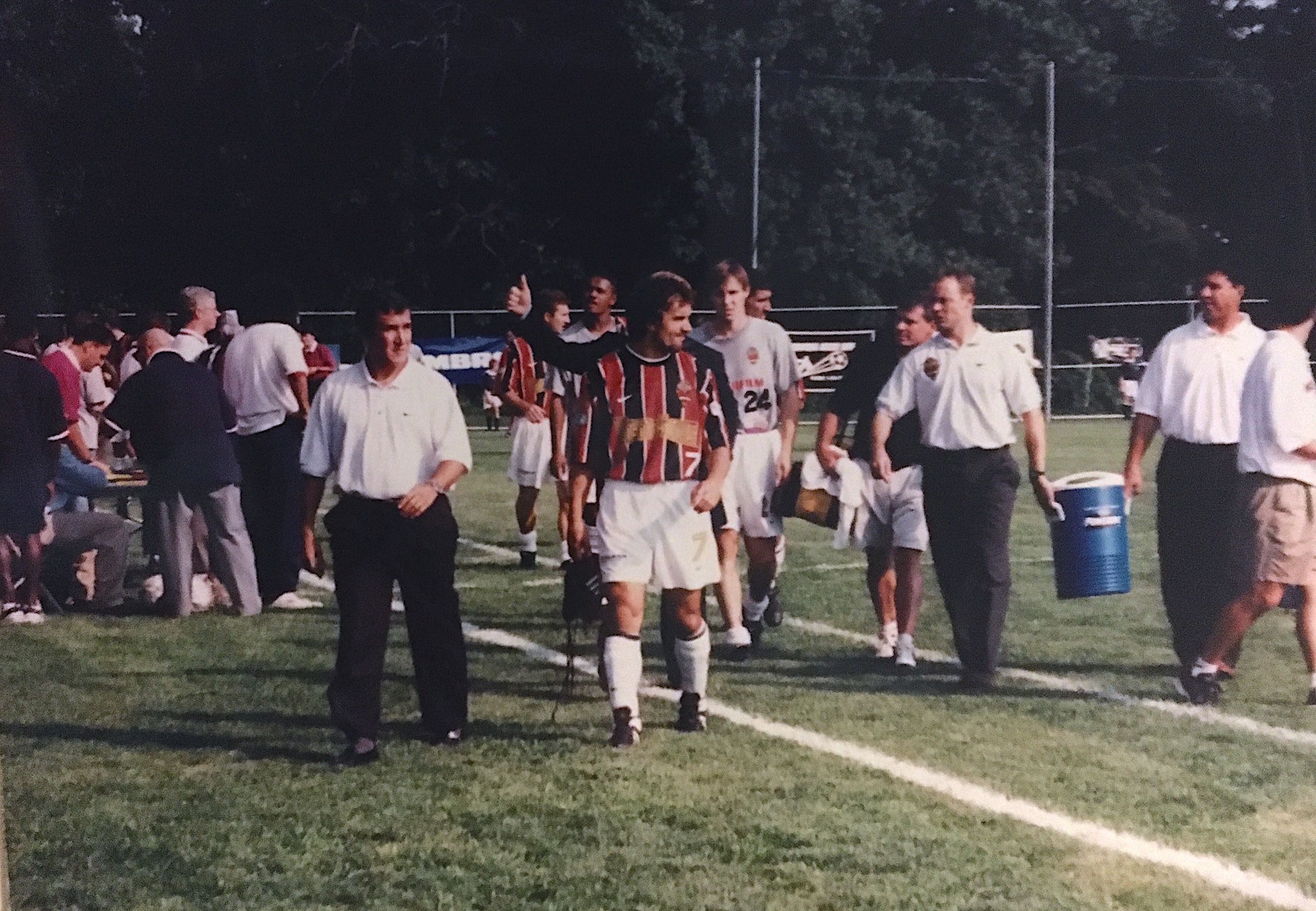 Seats were at premium as an announced crowd of 1,250 showed up. League and club officials sat in bleachers beside the sportswriters. Because the media table was at field level, and blocked by players who sometimes stood up from the MetroStars bench, most reporters missed the foul that led to the winning goal.

"The game was kind of…heated," said Bliss, who earned 33 caps for the U.S. Men’s National Team. "It got out of control. It got testy because it was a rival."

Meola kept his composure, making two dramatic saves on Martinez in the 88th minute. He blocked his first attempt from the top of the box and then on a turnaround shot while making a diving save.

"We were robbed a couple of times," Rooney said of those saves. "You couldn't tell which team was an MLS team at the time. With the exception of Tony Meola, that game would have been ours for sure."

Donadoni set up the Golden Goal after the Riders' Tom Lips fouled Brian Kelly in the left corner in the 105th minute. He drove his free kick to Harty, who headed it past Carou.

"Roberto [Donadoni] hit a great cross and I was able to flick it on. I didn't really get a good shot at the ball," Harty said, adding that he wanted to head it in another direction. "I don't care where it went as long as it went in." 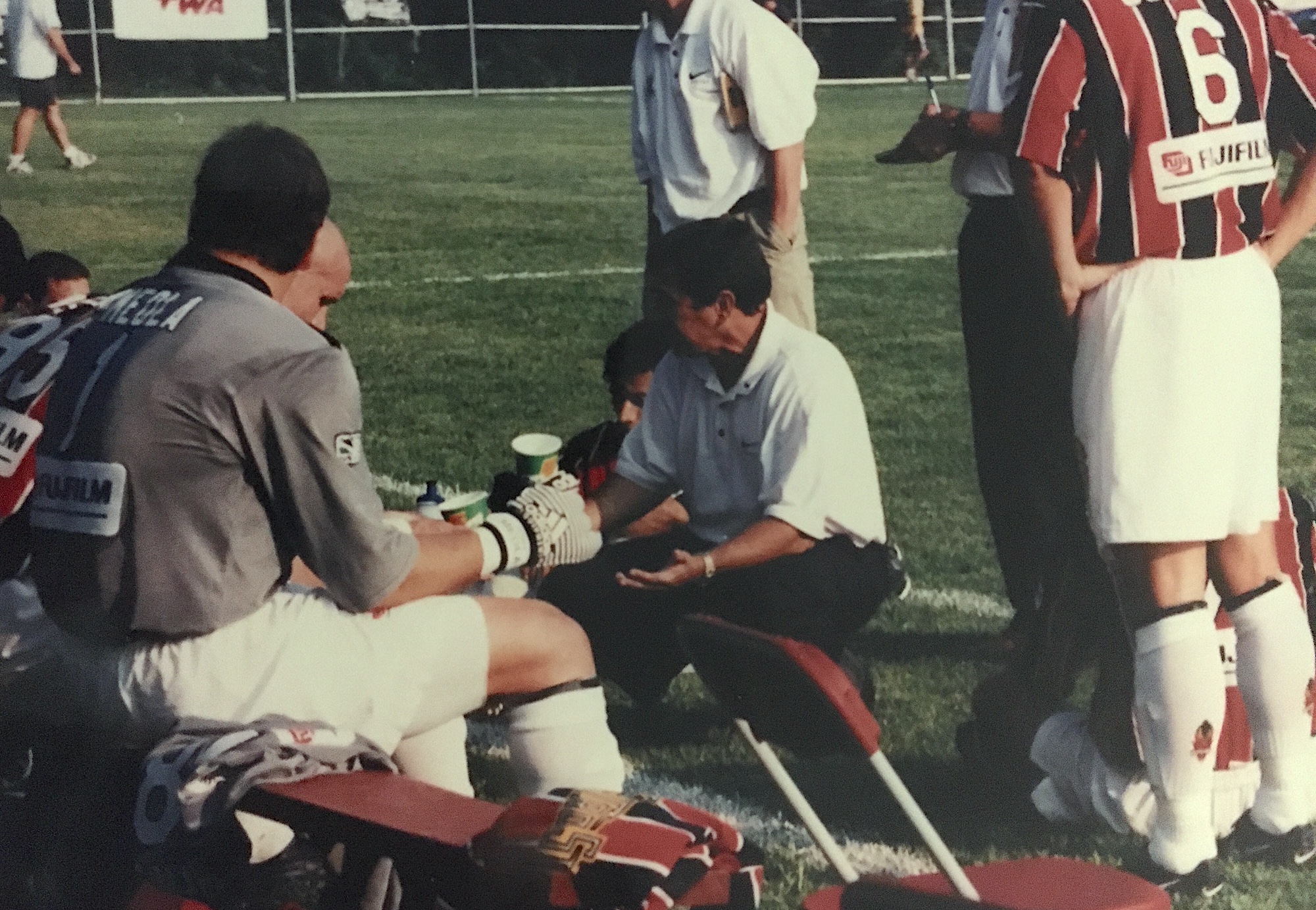 The MetroStars were relieved, the Riders deflated.

"We were upset with the free kick being called, where it was, the whole thing – you feel kind of undone," Rooney said. "Your first reaction is to be so mad at the referees and everybody else. But I couldn’t complain. If we would have beat them, they couldn't have said we didn't deserve it.”

"This was a Game-Seven type game for them because they could really make a mark,” said Meola, the villain on the day who surely felt some of the pain of his former club-mates. “They did make a mark. They didn't win the game. But they clearly made a mark."