With a trophy and a spot in the 2024 Summer Olympics on the line, the U.S. Women’s National Team returns to the field on Monday, July 18, to take on Canada in the final of the 2022 Concacaf W Championship. The match, which pits the reigning World Cup champions against the 2020 Olympic gold medalists, kicks off at 10 p.m. ET / 9 p.m. local at Estadio BBVA in Monterrey, Mexico and will be broadcast in the United States on Paramount+ and ViX.

Get ready for the Championship game with Five Things to Know about Canada.

Like the United States, Canada automatically qualified for the Concacaf W Championship as the second-highest ranked team in the region and was placed opposite the USA in Group B.

Canada, ranked sixth in the latest FIFA World Rankings, opened the group stage on July 5 with a 6-0 victory over Trinidad & Tobago and followed it up with a 1-0 victory over Panama in the second group stage game to clinch a spot in the 2023 FIFA Women’s World Cup. With the top spot in the group on the line, Canada defeated Costa Rica, 2-0, to secure a first-place finish in Group B.

In Thursday night’s semifinal against Jamaica, Canada opened the scoring in the 18th minute and tallied twice in the second half to down the Reggae Girlz, 3-0, and advance to the final.

Like the United States, Canada has outscored its opposition 12-0 thus far at the Concacaf W Championship. Midfielders Julia Grosso and Jessie Fleming lead Canada and are tied for the tournament lead with three goals each while forward Janine Beckie has a tournament-best three assists.

Beckie, Fleming and Grosso are three of the 18 players on this Canada roster who were also part of the squad that won gold at the Tokyo Olympics in 2021. That group is headlined by longtime Canadian captain Christine Sinclair, the all-time leading goal-scorer in international soccer history with 190 goals in her now 314 caps. Sinclair is one of 11 active NWSL players on this roster, with seven of the 12 NWSL clubs represented on this Canadian roster. Defenders Jayde Riviere and Zoe Burns play collegiately in the USA as well, competing for Michigan and USC, respectively.

Burns is one of the five players called up by head coach Bev Priestman who was not on the 2021 Olympic roster. The others are goalkeepers Sabrina D’Angelo and Lysianne Proulx, forward Cloe Lacasse and defender Bianca St Georges.

Overall, 21 of the 23 players on this roster have seen time at the 2022 Concacaf W Championship, with Burns and Proulx the only players yet to see the field. Defender Kadeisha Buchanan has played every minute for Canada this tournament and is one of only four players to log all 360 minutes of action at the 2022 Concacaf W Championship. Beckie (346 minutes) and Fleming (324) have logged the next-most minutes for Canada this competition.

The USA and Canada are set to meet for the 63rd time overall in a series that dates back to 1986 when the USWNT was in just its second year in existence. Canada is the most common opponent in USWNT history and the USA leads the overall series 51-4-7. Monday’s matchup will be the 10th meeting between the USA and Canada in the final of a Concacaf Qualifying tournament. The USWNT is 8-0-1 all-time against Canada in World Cup and Olympic qualifying – with every meeting coming in the final of the tournament - with the lone draw coming in 2008 Olympic Qualifying where the USA took home the title on penalties.

The USA and Canada last met in a Concacaf Final on February 9, 2020, squaring off for the 2020 Concacaf Women’s Olympic Qualifying tournament title. The USA defeated Canada, 3-0, behind second-half goals from Lynn Williams, Lindsey Horan and Megan Rapinoe.

The most recent meeting between the USA and Canada came in the semifinals of the delayed 2020 Olympics, a 1-0 victory for the Canadians on August 2 in Kashima, Japan. Despite having the better of the attack for much of the match and outshooting Canada, 17-5, on the day, a 75th-minute penalty kick from Fleming proved to be the difference as Canada recorded just its fourth win ever over the USA and its first since 2001. Following the semifinal win, which ended a 36-match winless run for Canada against the USWNT in last summer’s Olympics, Canada went on to claim its first Olympic gold medal, topping Sweden 3-2 in penalty kicks in the final after a 1-1 result through regulation.

Since that last meeting in the Olympics, the USA has gone 15-0-3 and outscored the opposition 76-5 over those 16 matches. Canada has gone 8-2-4 since the Olympics, with losses to Mexico and Spain over that span.

International competition aside, there is a very high degree of familiarity between the two sides as nearly every player on Canada’s roster has played in the United States at one point either professionally or collegiately, where many have played against and with members of this USA roster.

Additionally, prior to signing with Chelsea this summer, Kadeisha Buchanan played alongside the USA’s Lindsey Horan for Olympique Lyon in France, where they won a Championship League title.

By virtue of its top-two finish in Group B, Canada has qualified for its eighth FIFA Women’s World Cup, appearing in every edition of the tournament since 1995. Canada’s best result ever at the World Cup came in 2003, when the Canadians took fourth, falling to the USA 3-1 in the Third-Place Match. Canada has made it out of the Group Stage on two other occasions at the World Cup – reaching the Quarterfinals as hosts in 2015 and the Round of 16 at France 2019.

Canada will head Down Under looking to do what has only been achieved twice previously: follow up an Olympic gold medal with a World Cup. After winning the first ever Olympic gold medal in women’s soccer in 1996, the USA followed it up with a trophy at the iconic 1999 FIFA Women’s World Cup. The USA took home gold at the 2012 Summer Olympics in London and followed it up with a World Cup victory in 2015 in Canada. 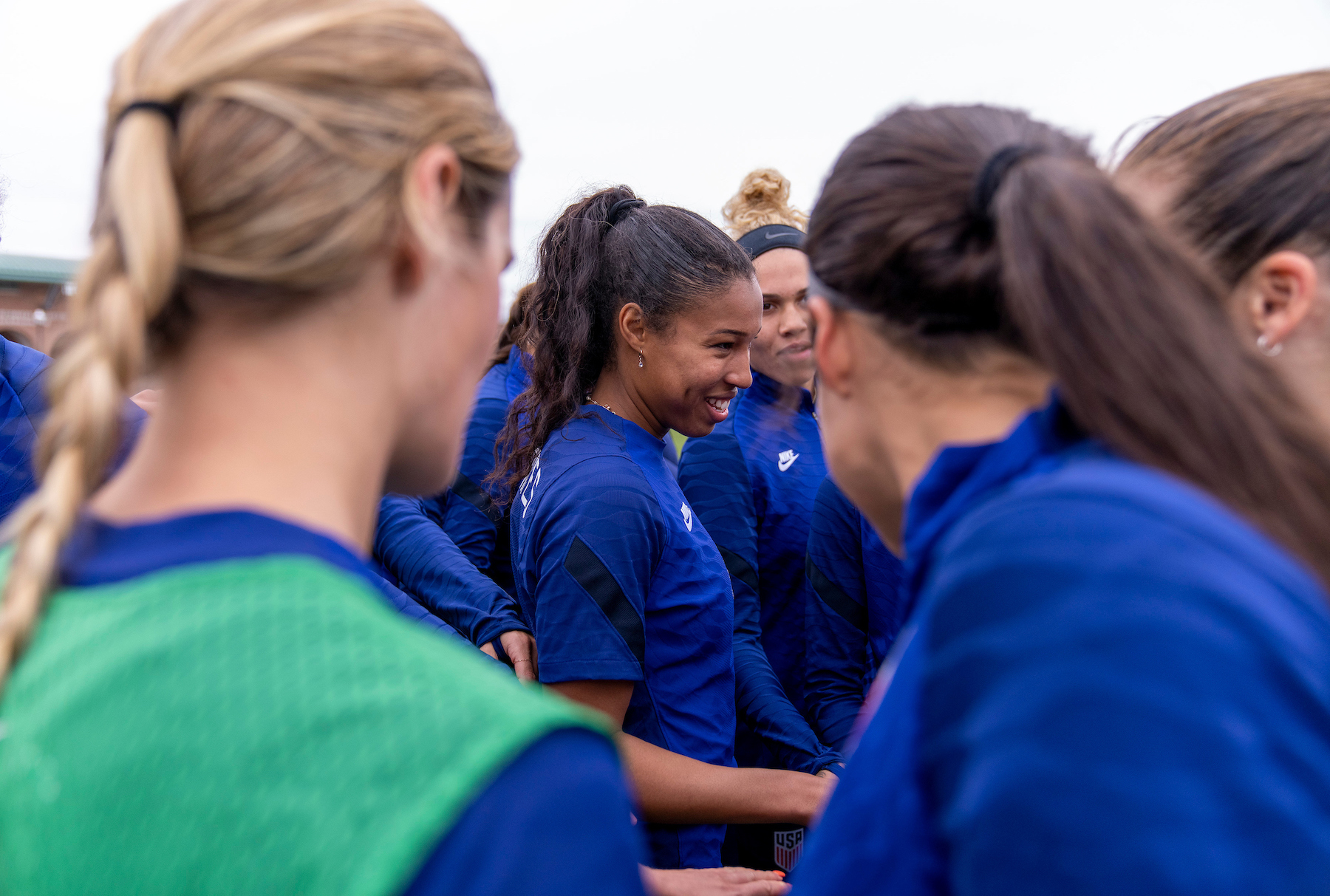