SKC’s Cup Hero Daniel Salloi: “This is our Savior”

Daniel Salloi doesn’t just like the Open Cup. He loves it.

“I’ve always loved this competition,” insisted the Hungary-born striker, who became Sporting Kansas City’s all-time top scorer in U.S. Open Cup history with a pair of goals in the Quarterfinals. “And we need this. We need this for our season.”

The four-time Open Cup champions from Kansas, who now face a Semifinal on the road against second-division strivers Sacramento Republic, are putting all their energy into the 2022 Cup. And for good reason. They’re languishing in league play and occupying the unfamiliar depths of rock-bottom in MLS’ Western Conference with just five wins from their first 21 games. Another Cup would make them the first team from the MLS era to win it five times – joining giants of yesteryear Bethlehem Steel and Maccabee AC of Los Angeles. 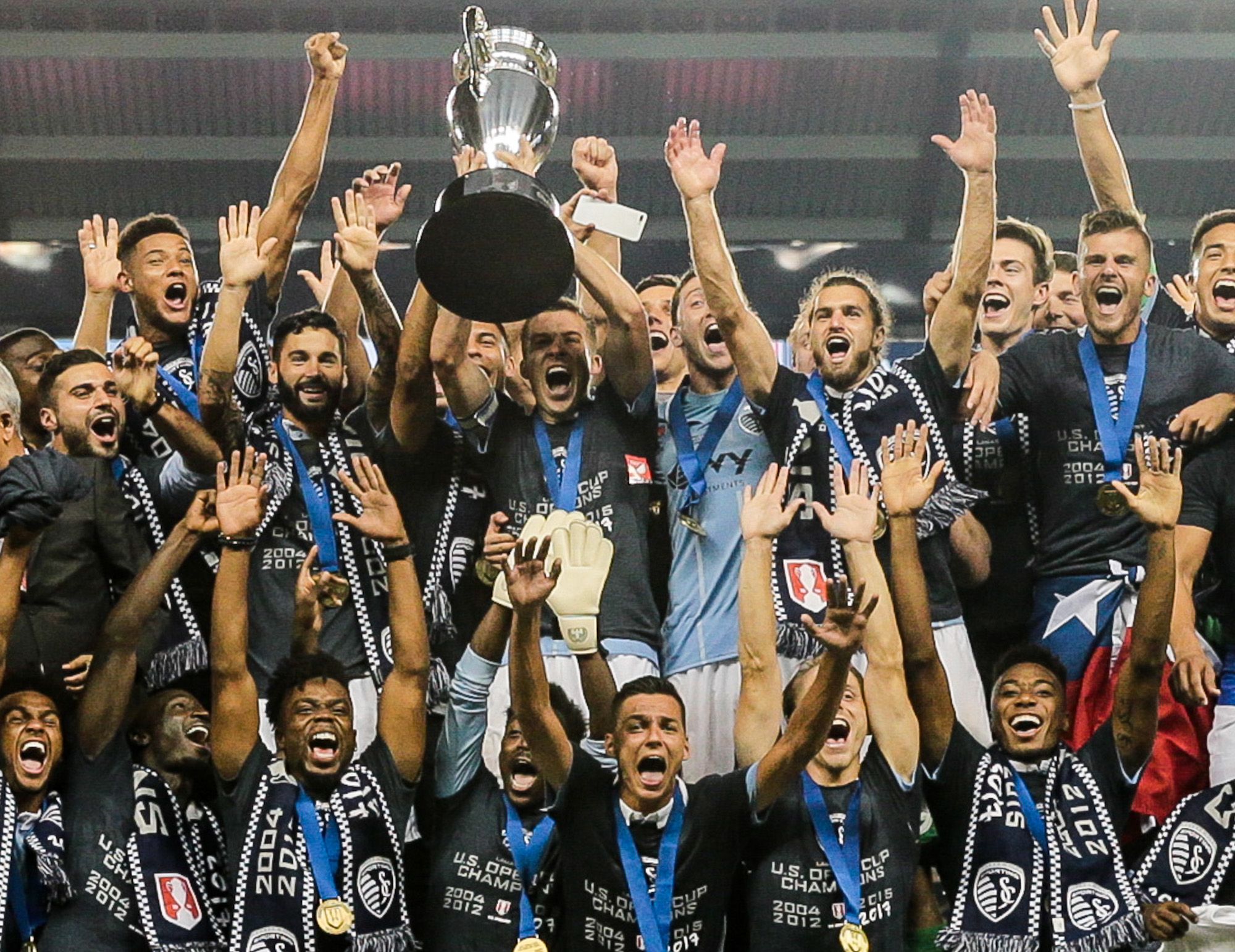 But for Salloi, there’s something beyond the obvious salvaging of a season. To watch his involvement in the tournament over the years is to see his condensed progress from talented teenager to top pro. His love affair with the competition began back in 2017 with an auspicious introduction.

“Whenever anyone asks I always say that it’s the top soccer moment for me,” Salloi told usopencup.com thinking back on his winning goal in the 2017 Open Cup Final against the New York Red Bulls. “It’s the top memory. Scoring a winning goal in a cup final at home, you can’t match that.”

Giant-killers & Cinderellas stir our soul, but it’s all about the 🏆. #USOC2017 belonged to the outstanding @SportingKC. 🎉⚽️🍾. @b_feilhaber22 ➡️ @danielsalloi 👏 pic.twitter.com/0qBIvUxHRg

But Salloi – previously of Budapest side Újpest, who signed with KC as a pro in 2016 after an impressive year in the club's academy – is trying to do just that. And with his team in the last four, facing a second straight game against a lower-league side, there’s no reason to think his magical moment from five years ago can’t be replicated. 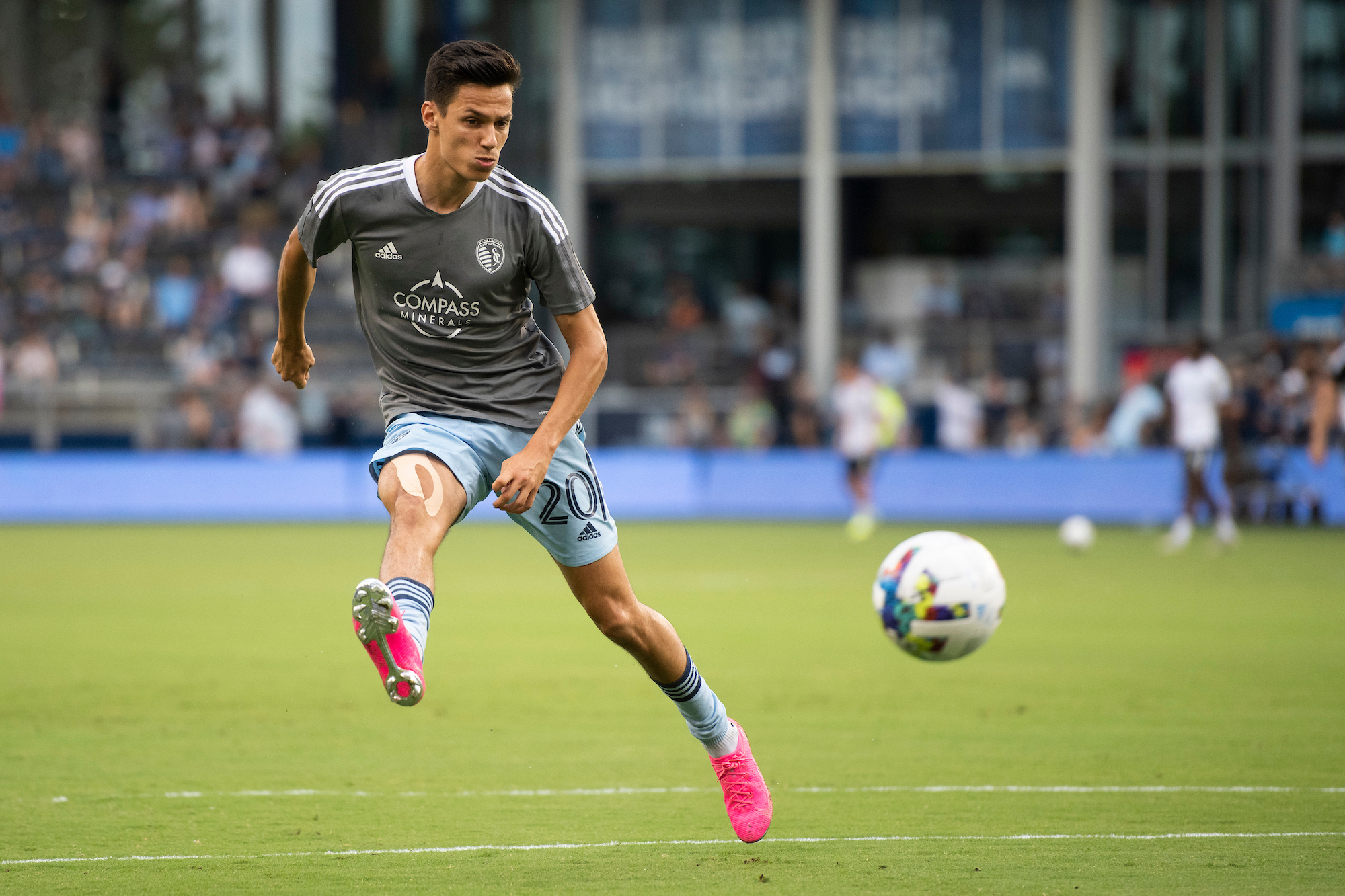 Salloi, a hybrid striker-winger conspicuous for his elegance on the ball, is thoughtful when he describes his second goal against USL League One underdogs Union Omaha in the last round. It was special by any measure, no less so for illustrating a new-honed killer instinct in the player.

“The defenders have to throw their bodies, so it’s tough for them,” he said about his decision to burst into the penalty area and drift past a pair of Omaha players.

“They [the defenders] also have to be careful not to dive in and give away a penalty,” he added about the goal (his seventh in the tournament since 2017) that saw him edge Dom Dwyer’s previous club record Cup tally of six. “These are the things I think about and I think I've improved on them over the years.”

It was his second goal in a 6-0 rout. It was also the best goal of the Quarterfinals. “That goal looks really good to me, to be fair,” a justifiably proud Salloi said with a smile, one never far from his lips. “I watched it back a lot.”

While most players dismiss individual honors as unimportant in the grand scheme, Salloi is refreshingly honest. And he sees his Cup record, which dates back to Sporting KC’s first involvement in the Open Cup in their founding year of 1996 (then as the Kansas City Wizards), as part of a continuum of progress both personally and within the club’s tradition of success. 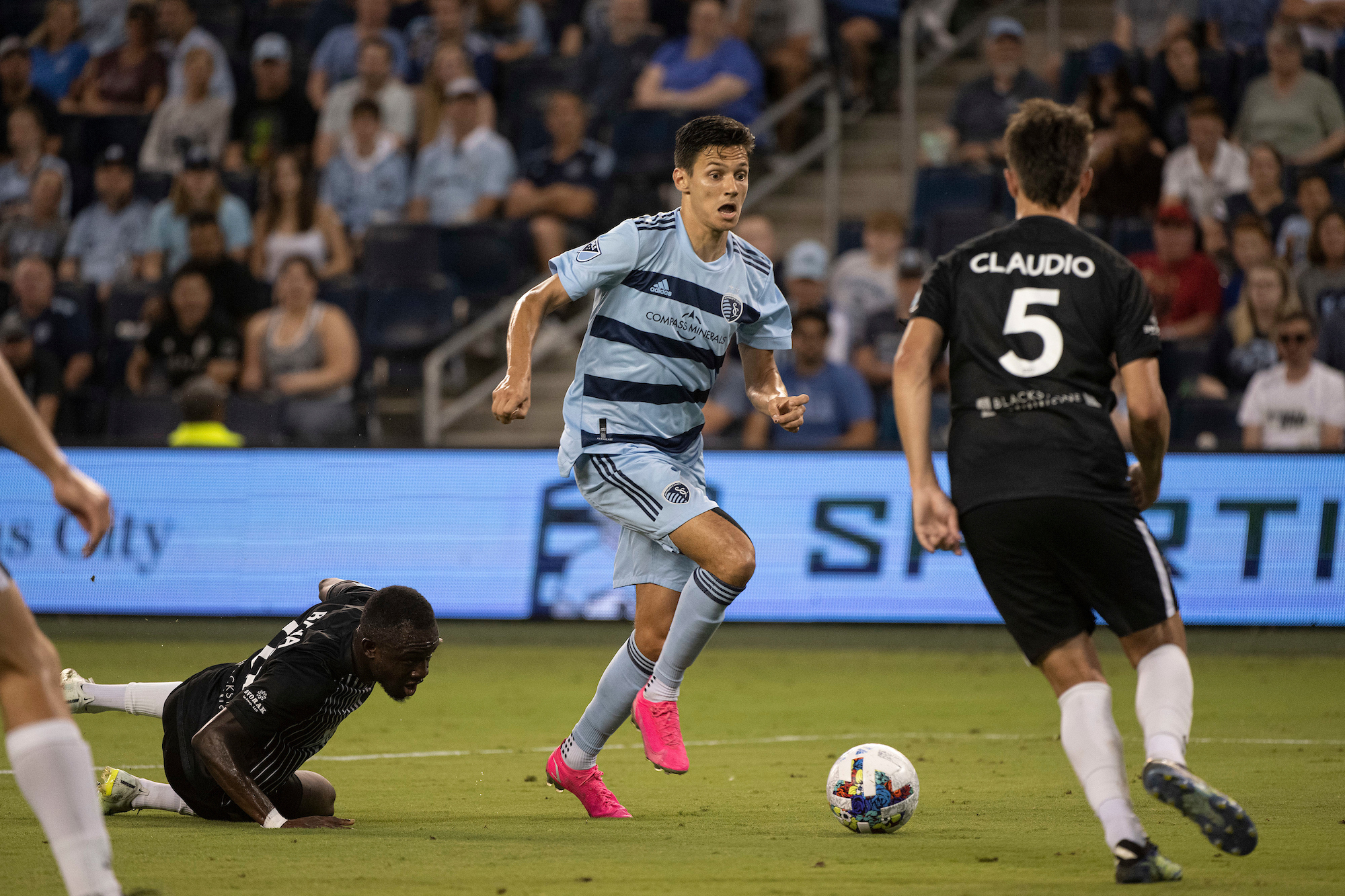 “I chase these records,” said the attacker, who followed in the footsteps of his father, István Sallói – once a teammate of current Kansas City coach Peter Vermes at Hungarian side Győri ETO FC – with his first international caps for Hungary in 2021. “They’re small challenges you put in front of yourself and you see you’re making a mark and breaking club records.

“I hope I can set more records and score more goals,” added the 2021 MLS All-Star selection and SKC’s top-scorer from 2018. “This way the next guy who beats it [the record] will have a bigger challenge.”

Still just 25, Salloi is a veteran in the Sporting Kansas City side coached by long-time manager Vermes, the former US international who, in his 13 seasons coaching at the club (plus two as a player), has become almost a symbol of its virtues of success, competitiveness and ambition.

“He’s taken a really big step forward,” Vermes said about Salloi’s obvious improvements through the years since he arrived in Kansas as an 18-year-old hopeful. “I think it has to do mostly with maturity.”

Salloi knows full-well the dangers of taking on lower-league opposition in the Cup and he sees the road test against Sacramento in the July 27 Semifinal as a huge day in Sporting KC’s rocky season.

“They’ve beaten MLS teams to get here,” he said of the Republic, coached by USL Championship Coach of the Month Mark Briggs, who’ve knocked off both the San Jose Earthquakes and twice champions LA Galaxy in an effort to become the first non-MLS team since 1999 to win the country’s oldest soccer tournament. “This is huge for them.

“But it’s also huge for us,” Salloi added in the somber tones befitting the nightmare season his club is having. “We need this for our season. If you can win something in a year, a Cup, it’s a good year.”

Nothing like a post-game sing-along with your supporters.@SportingKC are headed to the #USOC2017 Final! 🏆⚽️ pic.twitter.com/32xY0vwaRV

The club’s league form in MLS is the elephant in the room when any Sporting Kansas City player, or Vermes himself, faces questions this year. With a tradition of winning titles (two MLS Cups and four Open Cups) the club has faced injuries to key players, bad luck and a host of other difficulties.

With a shot at the MLS Cup playoffs a dim prospect, the Open Cup has turned into a glimpse of salvation.


It’s a point not lost on Salloi.

“This Cup represents our savior with the kind of season we are having [in MLS],” said Salloi, so often the club’s hero in the competition. “We’re putting all of our energy into it. We have a huge chance to win something this year [in the Cup]. There’s something magical in the Cup and I think everyone feels it.”

Salloi also wants to keep the club’s reputation from transforming with the passing of trophyless years. “We don’t want to be talked about as a club that used to win; that used to have it,” he insisted. “We want to bring it back and say this is a club that has it. That has it now.” 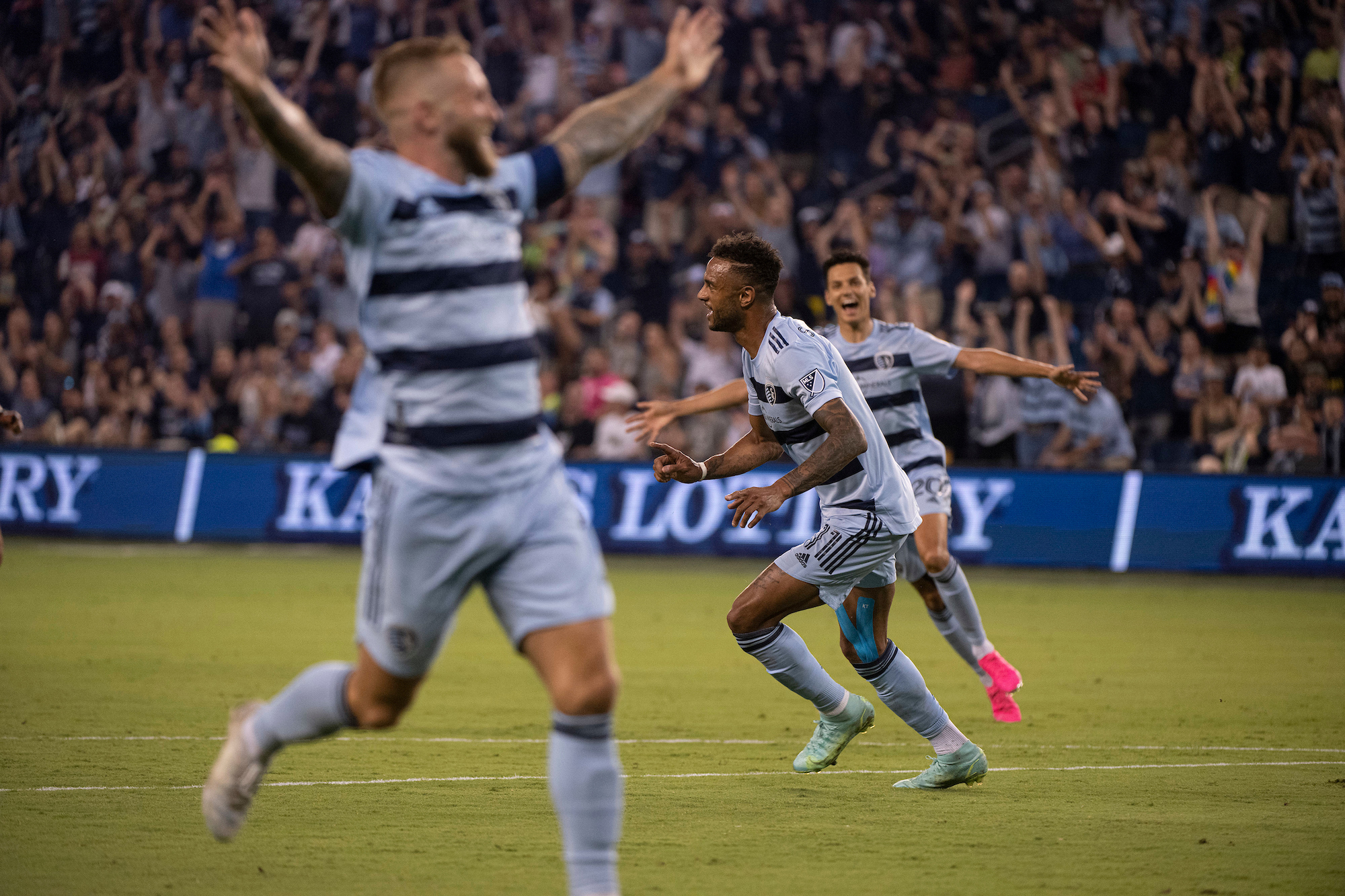 Salloi (background) in the 2022 Quarterfinal

That late September day in 2017, when a fresh-faced Salloi latched onto a searching ball from Benny Feilhaber and sent the home crowd into hysterics in a Cup Final, remains the last time KC painted the wall at Children’s Mercy Park – or hoisted a piece of silverware. That year, according to Salloi, is too deep in the inky past.

“It [2017] was the last time we won something and before that it was more frequent. We don’t want it to run away from us,” said the club’s last Cup-winning hero. “This would be the perfect time to win this tournament and prove that this club is still about winning trophies.”