The long-serving Sporting Kansas City boss sat down with usopencup.com to talk about an up-and-down 2022 ahead of the Open Cup Semifinal in Sacramento.
July 21 2022
Open Cup

Peter Vermes has seen it all, done it all – and won much – at Sporting Kansas City in his decade-plus as head coach. The former U.S. Men’s National Team player spoke candidly with usopencup.com about having to lean on the MLS club’s identity through a challenging campaign while also aiming to bring the U.S. Open Cup back to Children’s Mercy Park for a third time in his tenure.

usopencup.com: You’ve got history in the Open Cup both as a player and a  winning coach with Sporting Kansas City. What makes it a special competition?

Peter Vermes: Cup competition – in any country – is always interesting. And always a particular challenge. First off, everyone participates. And it’s open. You can find a Cinderella story in the tournament every year. A team you wouldn’t expect to can find a way and there’s different ways that you can be successful. 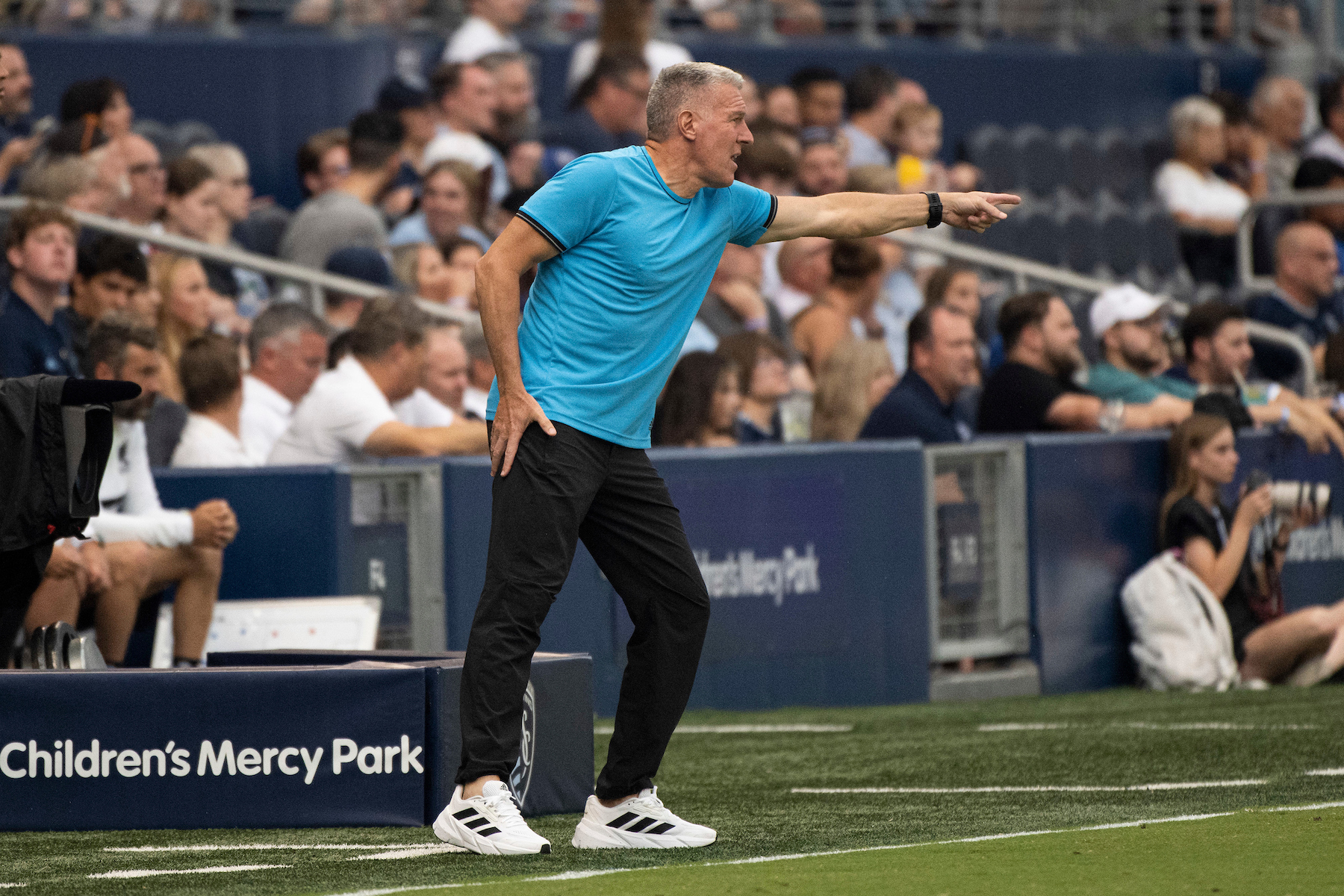 You faced one of 2022’s biggest Cinderellas in the Quarters (a 6-0 rout of third-division Union Omaha). What are the particular challenges for a top-tier side, like yours, going up against a big underdog?
PV: Any time you’re playing a lower-division team it’s always a dangerous game. They have an incredible motivation. And they’re all, at least on paper, going to say that they have nothing to lose. As the team in the higher division, you have a responsibility to show up and be ready. And concentrated. And focused. And you have to perform. If everyone in the team does that, you put yourself in a good position.

Even so, upsets happen…
PV:  Teams believe. For teams below MLS it’s a big game when they meet an MLS team. How could it not be? And what ends up happening a lot of the time is that a goalkeeper stands on his head. Their [Union Omaha] goalkeeper [Rashid Nuhu, in the Quarterfinal] made some really good saves early on. What you try to do as a [first division] team is score early. Because if you do that it changes the makeup of the game. He [Nuhu] was keeping them in it. But once we got the goal [in the tenth minute], there was a level of pressure that was off and we could play a little bit more free. That’s when things change. 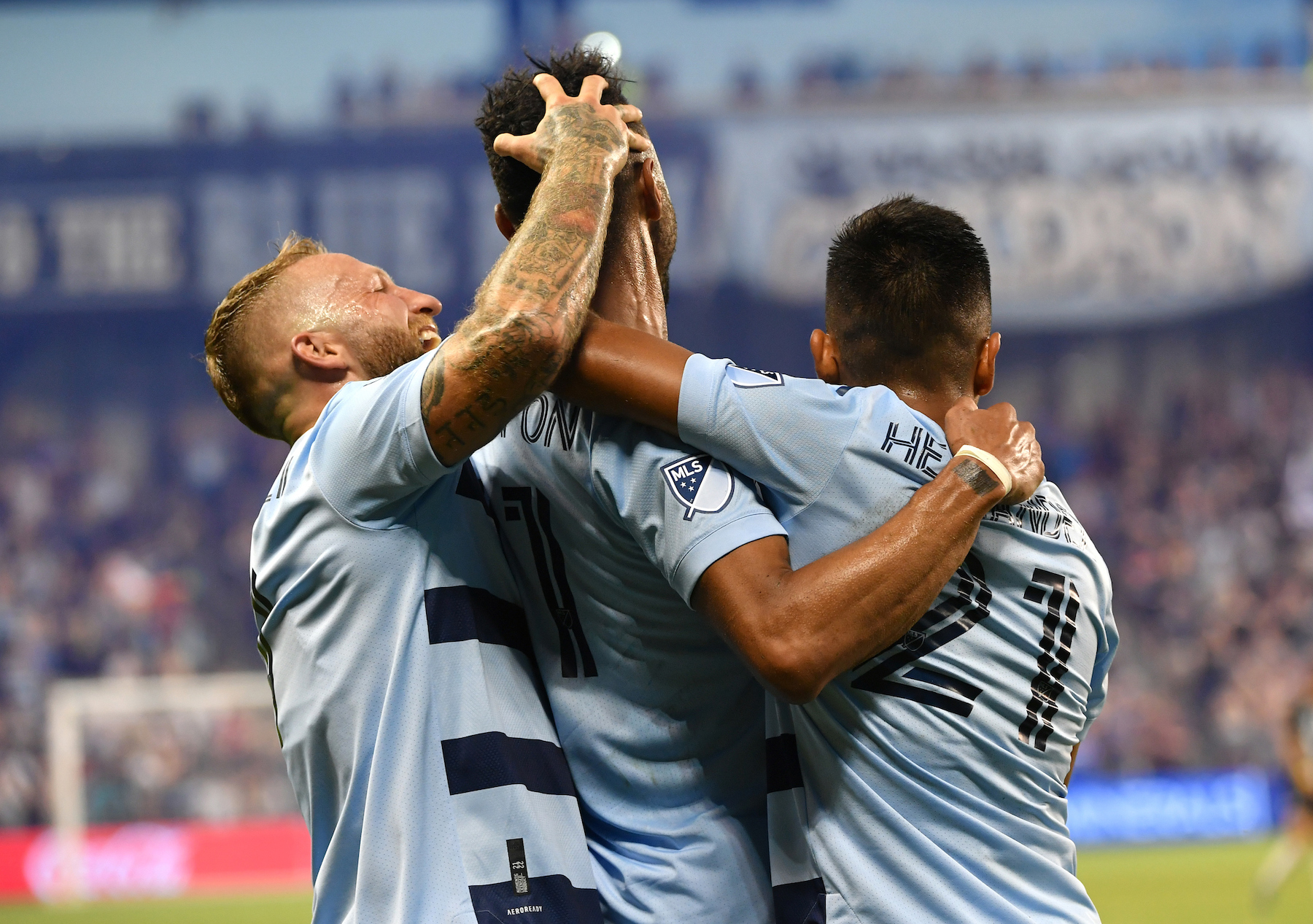 You’ll face a second game against a lower-league team in the upcoming Semifinals – and this time on the road against high-flying Sacramento Republic of the USL Championship. What do you expect?
PV: I see them playing very much as the home team. I see them coming out and being incredibly aggressive – and not having any fear. And just going after the game. The important thing for us is to be ready for that. It’s a Semifinal and it will be two teams who are going to put everything out there to try to win that match and to move on. Where we have to be really good is being focussed and concentrated in the game. It’s the little details in games like this that win out.


Before facing lower-division opposition this year, you had to survive two battles with fellow MLS sides FC Dallas and Houston Dynamo. Those were complicated games…

PV: Situations occur in the Cup and you have to find a way. You have to be mentally strong. You have to understand that it doesn’t matter who you’re playing, you have to go and put everything into the game to try and get a result. Those early games, they were really difficult for us.

The Dallas game in particular, in the Round of 32, was a real battle and even needed a 98th-minute equalizer and extra-time to seal the 4-2 result…

PV: I went out with a formation thinking it would work and I can’t remember a more horrific first 30 minutes in my career as a coach. And that was my fault. I ended up moving the team around three times and the impact of that saw us come back and win. But, again, you have to find a way. That’s important. 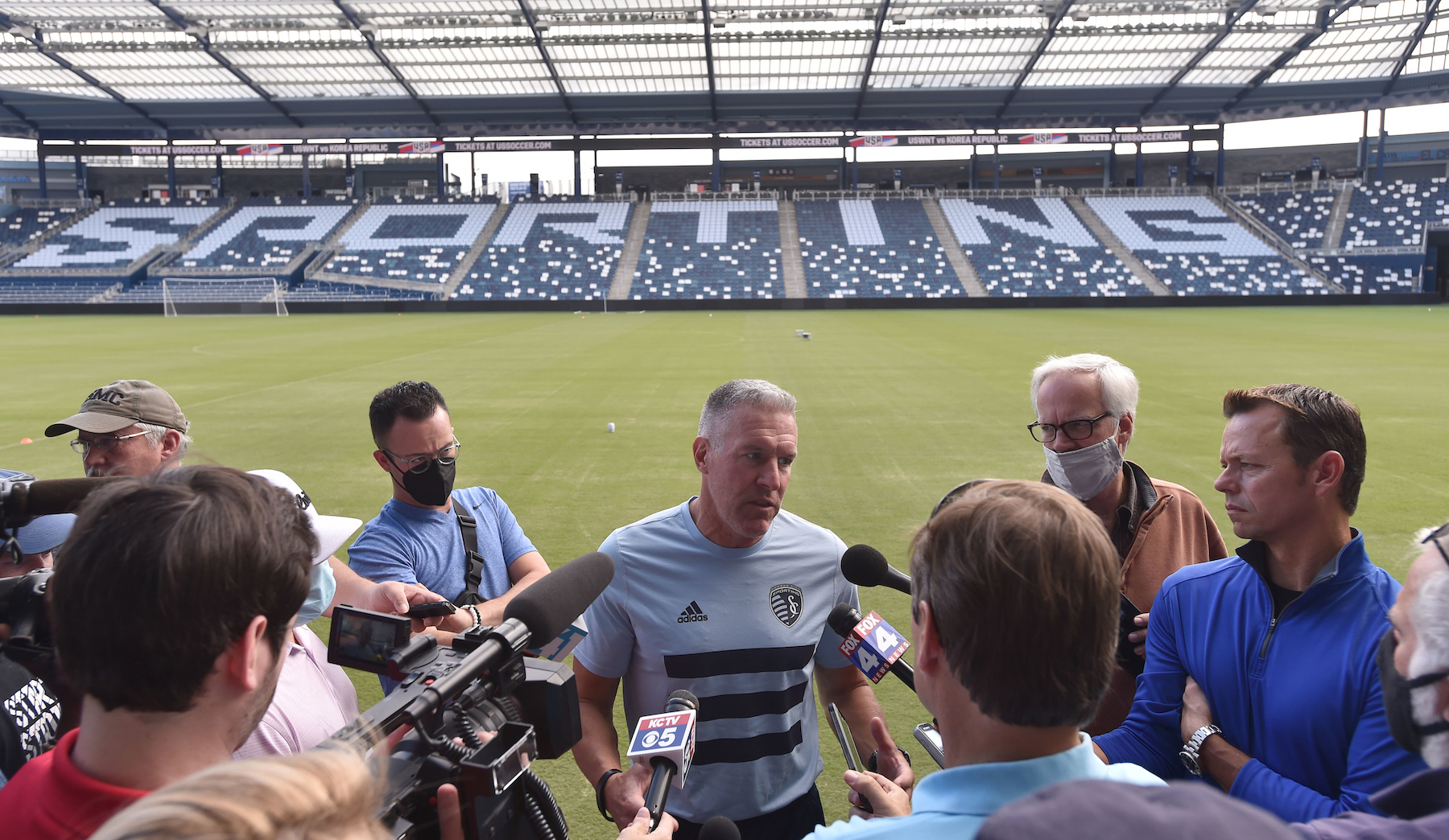 Are there certain elements, general things, that are the same before you take the field against an amateur team, an MLS team or a Sacramento Republic side with a place in the Cup Final on the line?
PV: The mentality always has to be the same. You never can underestimate your opponent in a Cup. Personally, and I try to communicate this to my team, when we enter those games I don’t care what division they’re in, where they play – I don’t care about any of that. It’s a group of men that want to win. What you’re competing against is the will of the opponent and you have to show up stronger than them.

You’ve been finding a way in the Open Cup, but it’s been a difficult year in MLS play for Sporting Kansas City. There do seem to be signs of a possible upswing at the moment. Would you agree?
PV: Some players are getting back into form and finding fitness after injuries. We’ve had more consistency in personnel recently. The team is in-form more and that’s allowed us to get closer to our identity. As they get closer to that identity they feel more comfortable and they gain more confidence. And then you can have some good performances that will give you the best chance to get a good result. That’s what we’re trying to keep building off of. 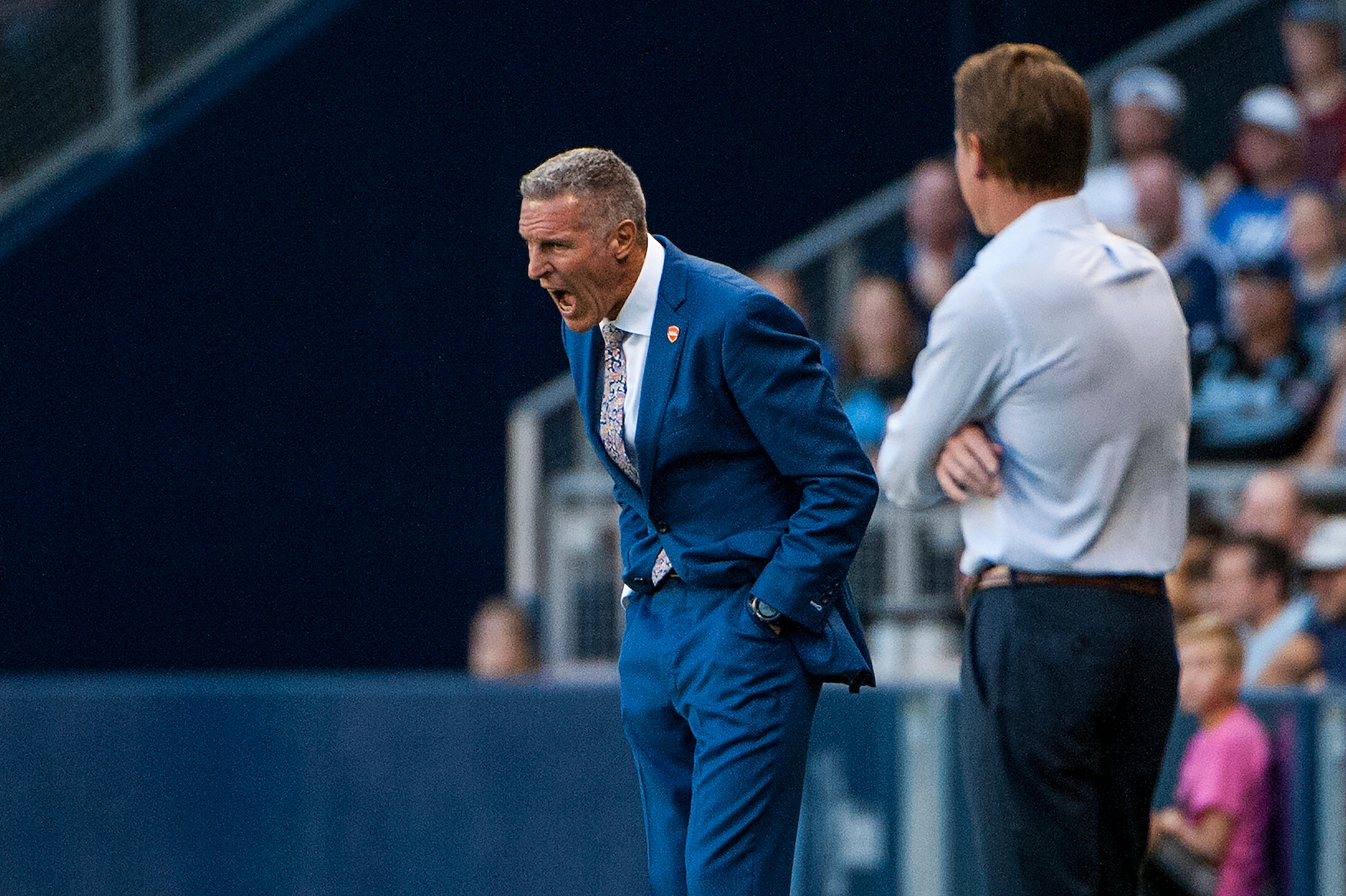 Intensity and identity are watchwords for Vermes

How fast can a turnaround in form and fortunes happen?
PV: This league is interesting because it’s always about riding waves. You get on the wave and the question is how long can you ride the wave. And as soon as you fall off, can you get back on the next one? It’s the same as out on the field. Transition is a really important aspect in the game. Well, it’s the same with the transition from losing – can you win right away? The next game, and the one after that.

The other aspect in this league is the dog days of summer. In this league, they hit everyone at some point. That’s a whole other animal that you have to try to control.

Only 👆 of the Final Four has ever won a Cup 👇 #USOC2022 pic.twitter.com/eyqBpeD4ML

And staying alive in the Open Cup, with the Final set for mid-September, could help maintain something – a target as you look ahead?

PV: When you’re in a competition like the Open Cup, where you can use some of those games to increase confidence and rhythm of play, that can be a huge motivation factor for the group.

This is something you, and a handful of the players, know first-hand having won the Open Cup in 2017…
PV: Having experience is priceless. Having guys like that [Graham Zusi, Tim Melia, Daniel Salloi and Roger Espinoza – who lifted the Cup in 2017], who’ve won things, but who’ve also just been around the club for as long as they have. And are willing to share what they know. That means a lot in a team.

Do they also pass on the message that winning is expected at this club?
PV: That’s where the culture comes in. And that’s truly the foundation. Everyone talks about winning. The question is do you? How do you hold people responsible and accountable to that when it happens. I tell all the young kids, ‘congratulations on signing a contract’ but that doesn’t make you a pro. That’s the first step, but then you have to want to make the first team someday and then you want to break into the starting eleven. In the end, to me, when you get to that first team it’s about winning. To make your mark you have to be a part of a team that wins something. A trophy or trophies.

What’s your main memory of winning the 2017 Open Cup at home?
PV: I have a lot of memories from that day. But that year our owner, Mr. [Neal] Patterson, passed away and he was a huge fan of the Open Cup. We dedicated that competition to him. And having won that in that year, it was a special moment. I really appreciated the commitment the players made because they truly understood what it meant to the club – but also to the family. That was really special. 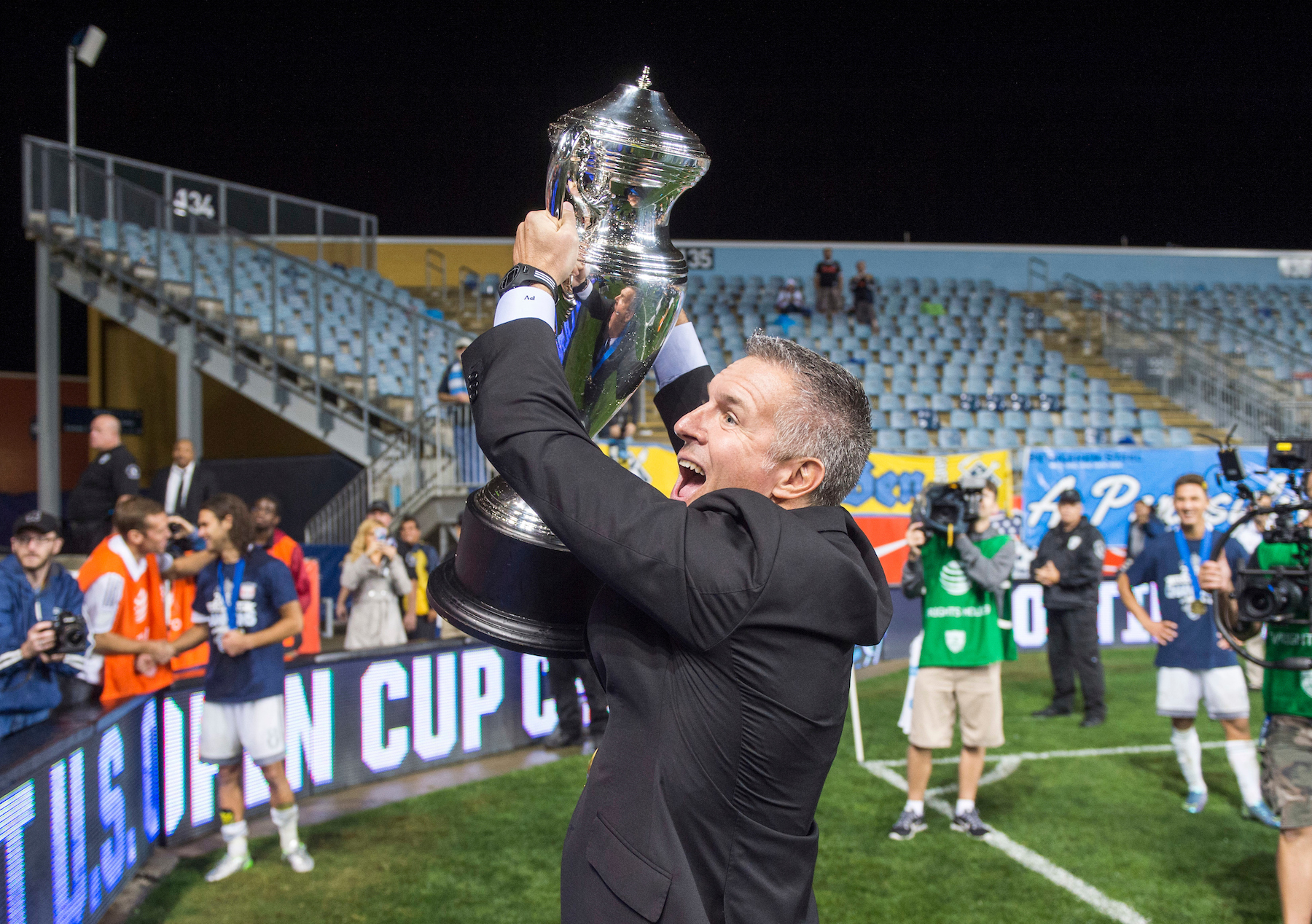 That year (2017) isn’t exactly a long time ago, but it’s the last time Sporting Kansas City lifted a trophy. Is that too far in the past for your liking?
PV: It is. Every year, you at least have the Open Cup, Supporters Shield and MLS Cup to play for. You have those trophies to win. To me that’s what you’re in pursuit of. That’s why I'm here and that’s why I do this. I love the profession I’m in and I love the project here, but in the end it comes down to one thing and that’s winning trophies. That 2017 looks a little farther in the past than I’d like. We have to - we must- try to win something sooner than later. That’s for sure.