Read the latest in our ongoing Great Eight Series where we take a light-hearted Round-by-Round look at some of the magic moments of America’s favorite soccer tournament.
Jonah FontelaJuly 1 2022
Open Cup

Fans of the 109-year-old Lamar Hunt U.S. Open Cup (in its 107th edition) live by its magic moments. And the Quarterfinal Round of this 2022 competition tossed up a good few of those between June 21 and 29. Join usopencup.com for a look back at eight moments of note from four games in which eight teams were evenly split between jubilation and despair.

While third-division dreamweavers Union Omaha met an emphatic end, enmity defined the day as the Red Bulls emerged unscathed against a familiar foe. Elsewhere, Orlando City needed last-gasp heroics to send Nashville SC out and Sacramento Republic, the lone remaining lower-division side alive in the Last Four, picked up the mantle of tournament-darlings.

Sacramento Republic are reviving, in spirit at least, a proud old Open Cup slogan: If you can’t join ‘em, beat ‘em. Coined by fans of the Rochester Rhinos – the only non-MLS team to win the Open Cup since the league’s founding in 1996 – it’s as apt now out West as it was then in Upstate New York. “The gap is closing,” insisted Rodrigo ‘RoRo’ Lopez, Sacramento’s captain and tournament top-scorer (with four) so far. These words, from a decade-long veteran of the U.S. lower leagues, ring true too. And as the symbol of a club, once promised a place among the big boys of MLS only to have that coronation snatched away, his comments may prove prophetic. There’s grievance – and brilliant play – fuelling this SacRep team. Traveling fans of the San Jose Earthquakes (of MLS) brought a banner with them to Hearth Health Park in the Round of 16, which read: Welcome to MLS…Oh, Nevermind. And there it remained on the stands after SacRep’s 2-0 home win, trampled and tarnished, along with the Quakes’ hopes of a Cup run. 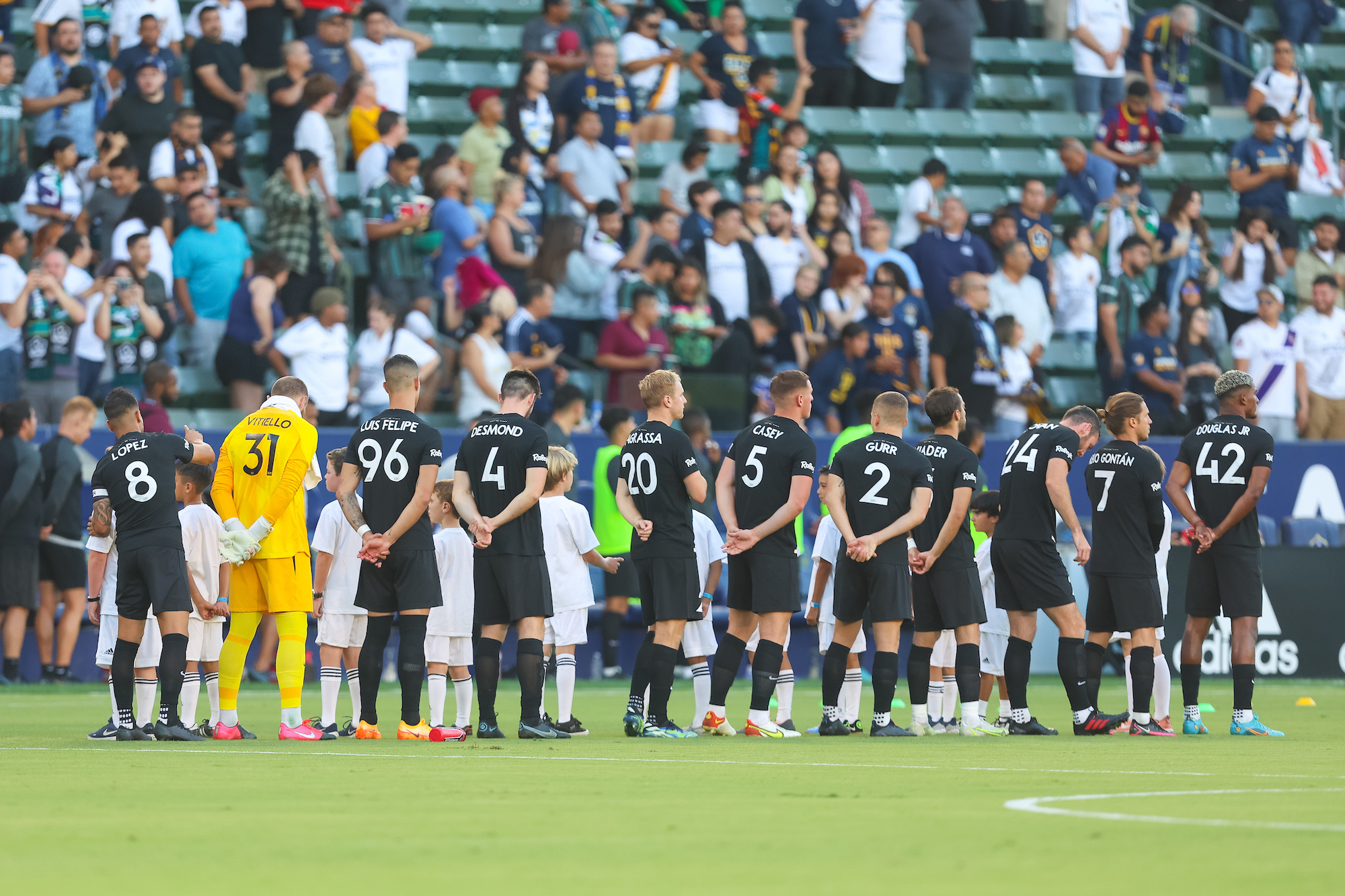 “We’re not stuck in neutral; we’re not waiting around,” said Todd Dunivant, Republic GM and a former Open Cup winner with LA Galaxy – the very club his SacRep beat 2-1 to become the first non-MLS team to reach the Semis since 2017.

The first non-MLS team to reach the U.S. Open Cup semifinals since 2017.

A historic night for @SacRepublicFC, who beat the Galaxy 2-1 👏

End of the Road for Dream-Team Union Omaha

Some dreams you don’t want to end. You linger with them, half awake and half asleep, in the blue of early morning. Union Omaha’s 2022 Cup run was one of these. It had everything. A hungry coach, unwilling to relent to history’s dictates. “Why shouldn’t we believe we can win it all?” he asked on the cusp of the Quarterfinal in Kansas City. Their fans showed up in droves – the largest party of away supporters ever to turn up Children’s Mercy Park. And the players, the likes of young Joe Brito and Noe Meza and old pro Conor Doyle, embodied the essence and promise of the Open Cup for so many months. We pinched ourselves when they left the Chicago Fire on the mat at Soldier Field – and then repeated the act on 2019 runners-up Minnesota United in the Round of 16. But Sporting KC is a different animal. Peter Vermes is no gentle mother, sneaking into the bedroom to awaken softly with a whisper. The first of his side’s six unanswered goals came from Daniel Salloi after only ten minutes.

The Hungarian striker was a pup, still in his teens, in 2017 when he scored four goals in Sporting KC’s last Open Cup-winning year. His dad used to stay up deep into the night in Siófok, thousands of miles and an ocean away, to watch his son get his first chances as a pro (he only woke Daniel’s mother when their boy scored). Salloi took full advantage of his chances in 2017, scoring the winner in a thrilling home Final at a packed Children’s Mercy Park against the New York Red Bulls. And Today, he’s established. Perhaps just shy of a league-wide star, he’s at a crossroads with no hint at how high his ceiling might be. His first goal (in a 6-0 rout of the Nebraskans) was a prosaic thing – a child’s play tap-in for the now 25-year-old. But his second, nearer the end, was a treasure. He went past two, before opening his hips to make the goal (his club-best seventh in the Cup for SKC) all his own. 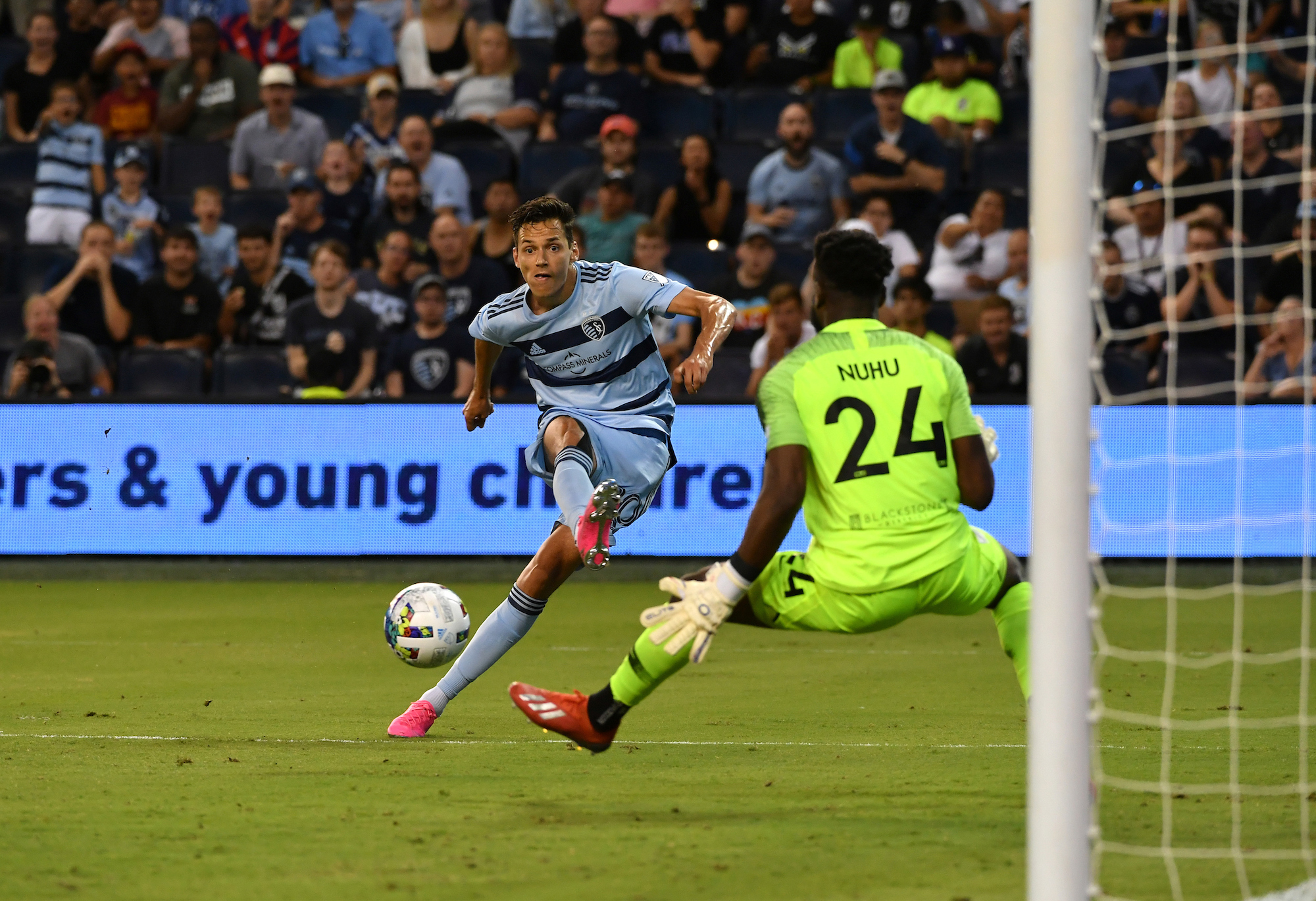 There was extra fire to the Quarterfinal in New Jersey. A 3-0 win for the home team in the Hudson River Derby turned, somehow, into a time machine. Three red cards, one for a head-butt and total loss of control, transported anyone watching – and old enough to remember – to the pre-MLS era of the Open Cup. Before the glitz and glamor of Major League Soccer and its Designated Players. It harkened back to the Metropolitan Oval, iron rail-ringed regular host of the tournament’s Final, and the days of the New York Hungarians and the Greek Americans – Hispano or Hakoah. We could have been at Farcher’s Grove, just 15 minutes (without traffic) from Harrison over in Union, New Jersey – and home to two-time champions Elizabeth SC. Or farther back still, to the first installments of the country’s oldest competition, deep in the last century. Back then, a brawl at the final whistle, like the one that overcame the victorious Red Bulls and the defeated NYCFC men, was as common as the rain. 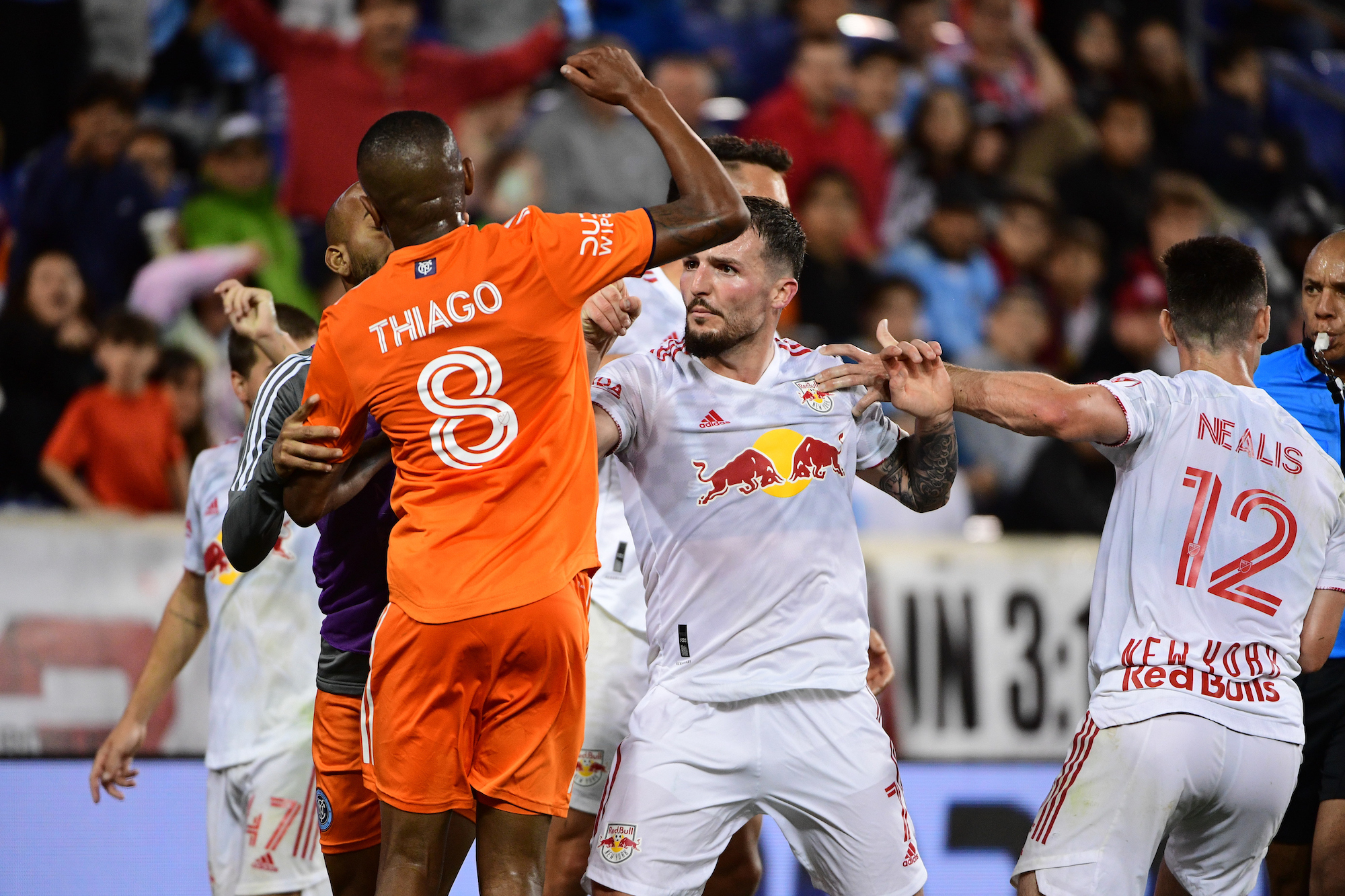 But it wasn't just blood and thunder at Red Bull Arena. There was magic in the air too. Victim of some rough early treatment in midfield, it was no certainty that the 25-year-old Brazilian sorcerer Luquinhas (Lucas Lima Linhares) would finish the game on his feet. When it all seemed certain to descend into a chaos of bad blood and desperation, it was this Ceilândia-born schemer’s velvet feet that brought a touch of the much-needed divine to proceedings. Things were far from settled for the home side just past the hour mark, even with a one-goal edge thanks to Lewis Morgan and one player more after Thiago Andreade saw red. That’s when Luquinhas raised a leg above his head to tame a bouncing ball. He waded into a churning eddy of blue-shirts at the heart of the NYCFC penalty area and wriggled this way and that before creating, finally, the bit of space needed to pave the way to victory.

Numbers don’t lie, except when they do. So we’ll keep it simple for you. We saw 14 goals fall in four games. Now, admittedly, six of those came from Sporting Kansas City in their lopsided rout of third-division heroes Union Omaha. But that still leaves us with three and a half goals per game on the average and a level of net-bulging worthy of celebration. Only two teams of the participating eight (Union Omaha and defending MLS champions New York City FC) failed to get on the scoresheet and only one game – the high-drama affair between Orlando City and Nashville SC – needed a penalty shootout to settle the score. Another number to consider is 55,382 – the new record attendance for a Quarterfinal round of the U.S. Open Cup (up from 46,098, the last time the tournament was played in 2019 before a two-year hiatus caused by COVID-19). Kansas City, aiming for a record-tying fifth crown, had the highest single-game number of fans (18,552).

Gallese and a Game of Tomorrows

Geoff Hurst, legend of the English game, coined an instructive phrase: football is a game of tomorrows. Pedro Gallese and his victorious Orlando City get it. So too do Nashville SC, for opposite reasons. It was only a little over two weeks ago that Gallese, Peru’s No1 net-minder, saved the first penalty of a shootout with a place in this year’s FIFA World Cup on the line. He’d put one foot in Qatar. But the fates interfered, as they tend to, and the evening ended with he and his mates in tears and the other team’s keeper, Andrew Redmayne, grabbing global headlines for his circus act and final-kick heroics. Then came tomorrow, and another shootout. This time in Gallese’s first-ever Open Cup. Rodrigo Schlegel’s equalizer deep into stoppage time saw Orlando City pull back from the brink and force a shootout for a place in the 2022 Semifinals. The Peruvian keeper, unwilling to let his tomorrow slip away, saved the day. His howl of victory after saving the final kick from Eric Miller was exorcism to all those demon yesterdays.

Nashhville, seconds from a Semifinal spot and so close to a first trophy they could taste it, will have to find their tomorrow somewhere down the road. Soon may it come. 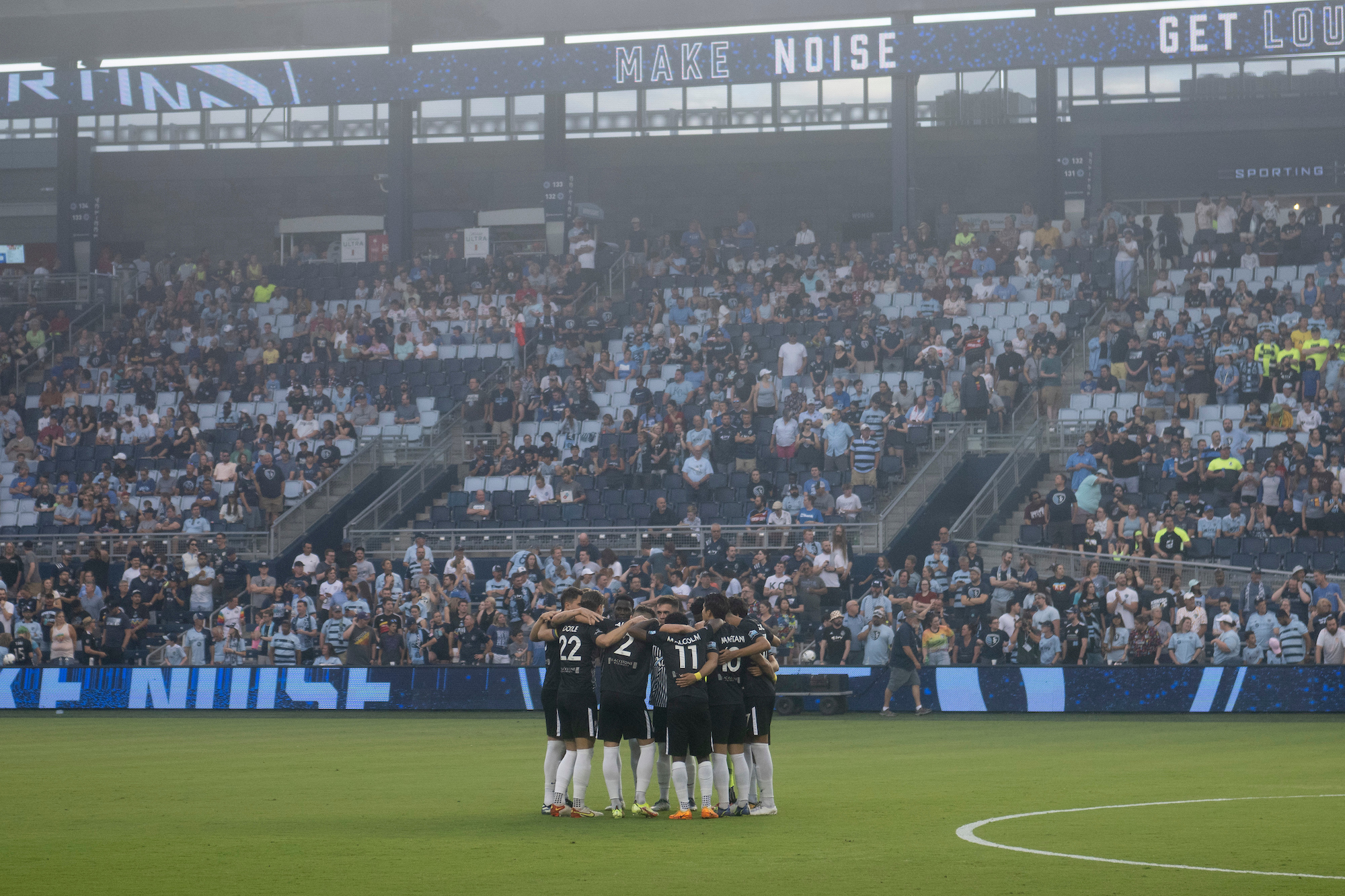 This is never easy. Our Cup is so often a cruel banisher of the striving and the honest – even the deserving. As much as it pains us to bid farewell to those brave Owls of Omaha, we won’t soon forget what they did here. LA Galaxy, twice champions, we’ll see you next year – but will veteran Sacha Kljestan still be in the mix? If not, we’ll remember his run to the Final with the New York Red Bulls in 2017 and his all-around elegance. New York City FC, reigning MLS Cup holders, we’re sure you’ll find your way in our Cup soon enough. And, of course, Nashville SC, out of Tennessee. You went down swinging in your first go-round as an MLS side – and for that we applaud you.