Read the latest in our ongoing Great Eight Series where we take a light-hearted Round-by-Round look at some of the magic moments of America’s favorite soccer tournament.
Jonah FontelaJuly 29 2022
Open Cup

Fans of the 109-year-old Lamar Hunt U.S. Open Cup (in its 107th edition) live by its magic moments and unique circumstances. And the Semifinal Round of this 2022 competition tossed up too many to count on July 27. Join usopencup.com for a look back at eight moments of note from two games that saw, once again, the rug pulled out from under the trophyless Red Bulls, Orlando City book a place in a first-ever Final and second-division Sacramento Republic spark the dreams of underdog-lovers everywhere.

It won’t be the first Open Cup Final for a team from Florida. Back in the pre-MLS days, in 1989, when semi-pro clubs reigned in the space between the old NASL and the new top flight, not yet formed, a group of spirited youngsters from St. Petersburg beat the New York Greek-Americans at St Louis’ old Soccer Park. Those Kickers remain the only side from Florida to win an Open Cup – though Ray Hudson’s Miami Fusion (long defunct, but once of MLS) did reach the Final in 2000. Orlando City, finding their Cup rhythm through five rounds of play, will be at home again in the ultimate game of the 2022 edition – and it will be the first time an Open Cup Final is played in the state of Florida. A 5-1 rout of the Red Bulls in the Semifinal set up City’s sixth straight 2022 Cup game among the home comforts at Exploria Stadium. If one includes 2019 (the last time the Cup was played before a hiatus for the pandemic) they’ve played eight home games in a row (ahead of this ninth). What’s that they say about the luck of the draw?

There’s something about this team, this Republic. How they stood up to four-time champions Sporting Kansas City in the shadow of the California State Fair. They’ve class. Not just grit. They’ve guile too. And style. The Semifinal came down to penalties. And Sacramento, the second-division team with a dream from the USL Championship, thought they’d taken the edge when their outstanding goalkeeper Danny Vitiello saved William Agada’s effort. Wait now. There was drama to come. Referee Allen Chapman judged the keeper to have moved off his line early – sothe Nigerian got another chance. So relieved at scoring with his second effort, he rolled a front handspring into a full twisting somersault in celebration. Not to be outdone, Maalique Foster stepped up with the very next kick to beat John Pulskamp with the cheekiest panenka since the Czech midfielder invented it in 1976. Foster’s own front handspring and full twisting somersault was just as smooth. It was met with a roar from the home crowd, the Carnival’s thrill rides looming above the humble stadium like neon dinosaurs. The Republic scored all five kicks. That’s not luck. Is it destiny?

Sacramento Republic coach Mark Briggs asked this question before sporting Kansas City came to town. It’s a valid one, and it’s been asked before. By other second-division strivers who slipped into the Semifinal like party-crashers. FC Cincinnati were the last to do it in 2017. And two goals up on the New York Red Bulls, who had current captain Aaron Long and Tyler Adams just young pups in the squad, the Ohioans crumbled. Bradley Wright-Phillips stuck the dagger in late to seal a 3-2 win. Maybe the early lead was too much for Cincinnati? Maybe the air up there is just too thin? But whatever kept them from the mountaintop, the Open Cup Final, doesn’t seem to be a problem for Sacramento Republic. The club, once promised a place in MLS before having it snatched away, don’t know their place. They're proud proclaimers of an old Open Cup slogan almost a quarter-century old. It was sung by the only team since MLS’ founding in 1996 to win from outside its gated walls. If you can’t join ‘em, beat ‘em. These words drove the Rochester Rhinos to immortality. Listen close, you might hear the echo. 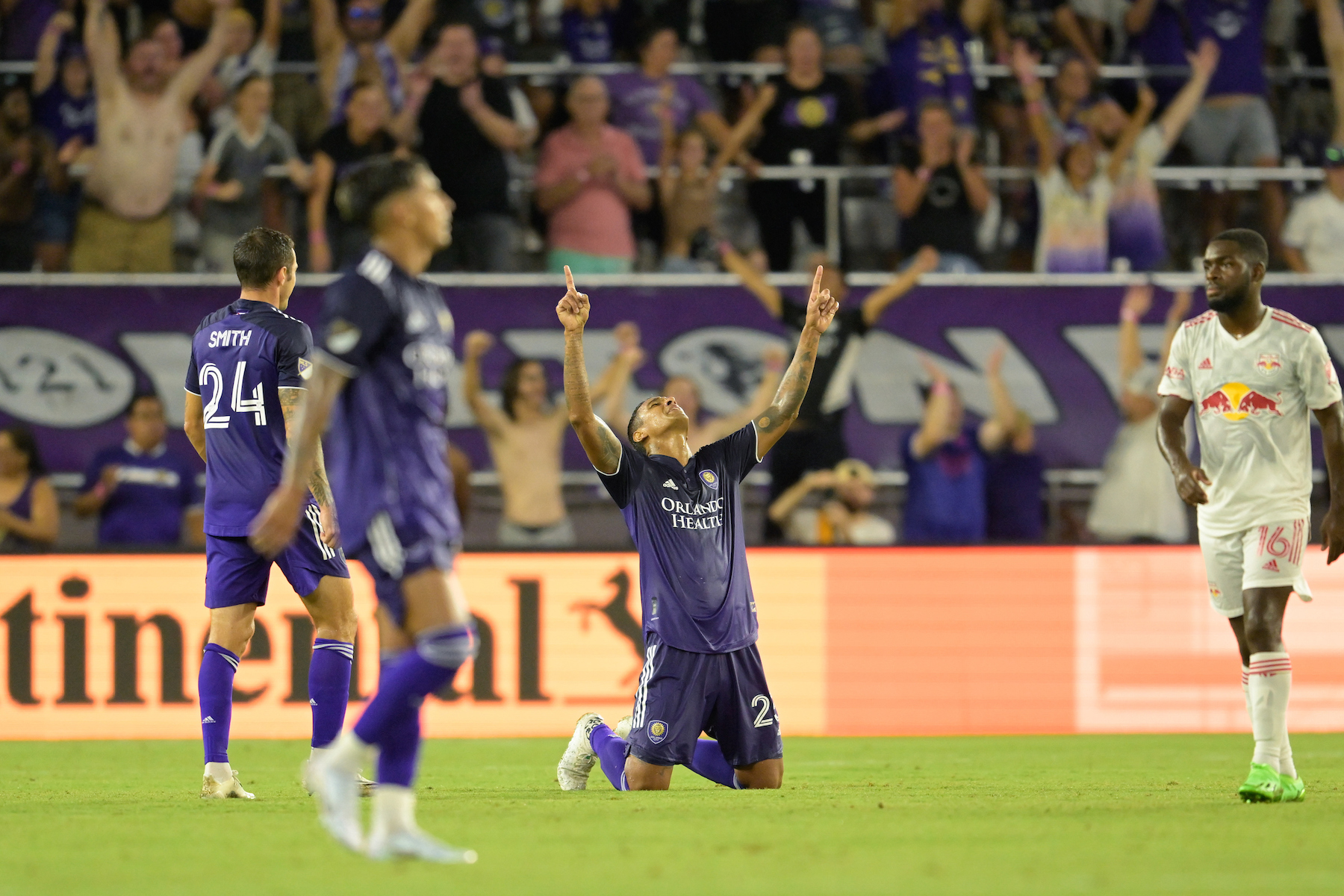 The New York Red Bulls, the 2017 Open Cup Finalists who were once, between 1996 and 2006, known as the MetroStars, had every reason to hope again. Polish striker Patryk Klimala hit the woodwork twice before Lewis Morgan’s clean-hit rocket put them up by one on the road in Orlando. Hope turned to belief. It crept in. Why shouldn’t it? That goal, a stunner, was only the beginning, right? More were on the cards. One would turn to two and on they’d go to set right their reputation of coming up just short so many times before. They were seconds from halftime, where they’d regroup and solidify their strong start. But the Red Bulls, without a trophy save one supporters shield from 2013 endlessly mocked by their MLS Cup-winning crosstown rivals NYCFC, didn’t make it that far. César Araujo equalized right away. Girded by that response, and by home the crowd’s full voice, the second-half was a purple blur for the Red Bulls. The goals came. Yes, they did. There were five of them, unanswered, from the Floridians who’ll now play for a first trophy since joining MLS in 2015. For New York, the state that’s produced the most Open Cup champions – but the last of them way back in 1999, the wait continues.

Goalkeeper Danny Vitiello, like everyone at Sacramento Republic, isn’t guaranteed much. Contracts are short, usually one season, in the lower leagues. Pay is low, compared to Major League Soccer. The frills, significantly less frilly. Vitiello fought for every ball through 120 minutes. He became the anchor of his team’s unlikely dream. They yoked their belief across his broad shoulders in Sacramento. And he made many saves, but none as important, as emblematic of a cause, as the fifth penalty in the post-game shootout. It was on Graham Zusi, seven time all-star and aging former hero of the U.S. National Team – a winner of one MLS Cup and three Open Cups with the club. Zusi, his hair tied back, exhausted from the efforts of many minutes and old legs, went the wrong way. He went Vitiello’s way. And it set up a Hollywood ending for this team from the unfashionable capital of the state of California.

Only outsiders use his whole name. OK, it’s Rodrigo Lopez. But in Sacramento, where he was the Republic’s first club signing back in 2014, he’s RoRo. Simple. Easy. Coach Briggs brought the 35 year-old back after seasons away because “he really helps in the pressure moments.” He’s the team’s captain, with all that implies, and Briggs charged him with being the talisman in this run for an Open Cup. Too old, some said. A sentimental move, others said. Fans showed up at the airport when RoRo returned to sign his new contract. He’s now on top of the 2022 Open Cup scoring charts and his mischievous smile and old-dog experience (and, mind you, continued excellence) have made him the symbol of a club that is, itself, a symbol of what is possible. He shed tears after the Quarterfinal win at LA Galaxy – one of the many MLS clubs who never offered him a contract. He also took the fifth and decisive penalty to send his team – from an adoptive home city that loves him like a son – to an Open Cup Final. 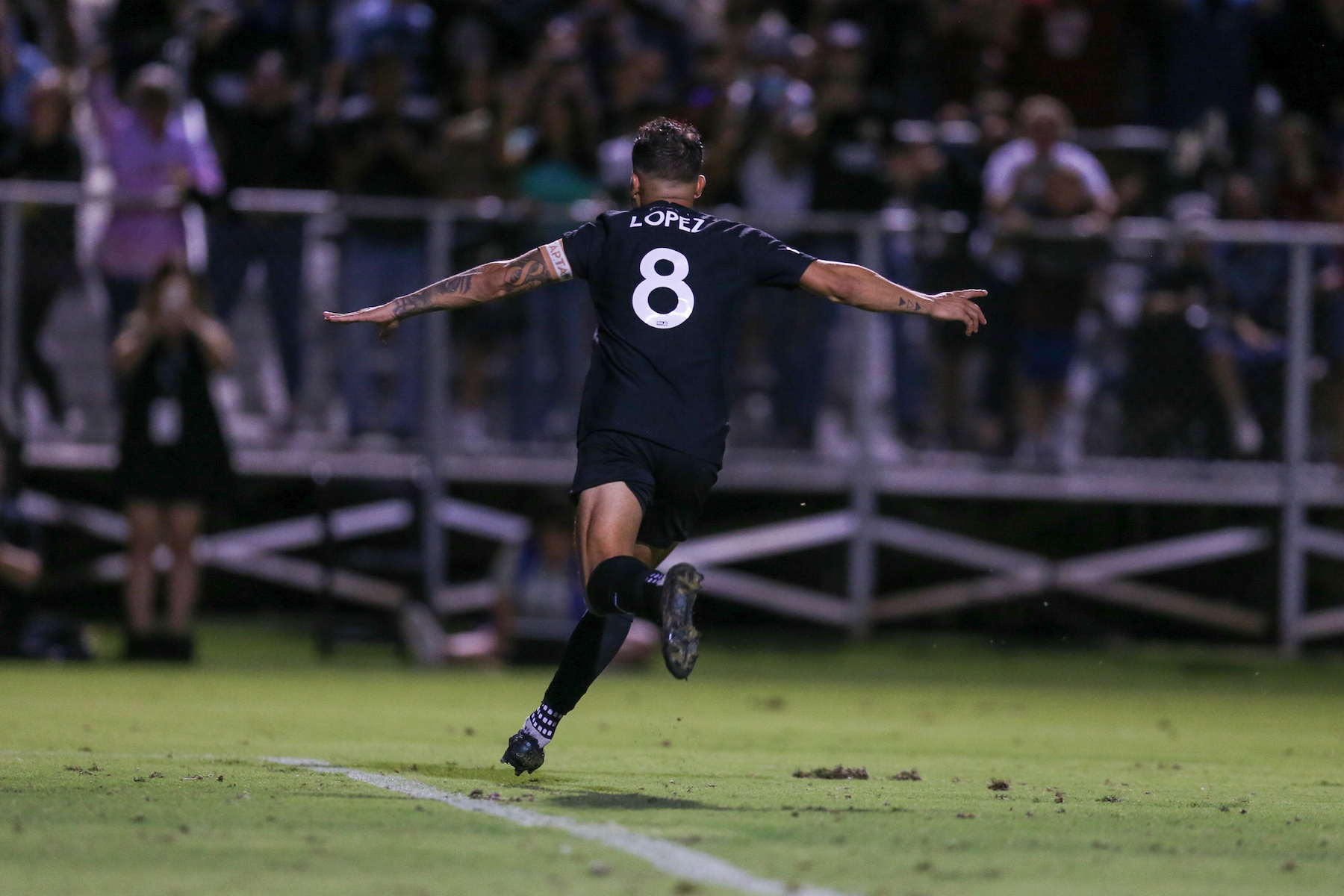 How they plague us. These numbers. Let’s scratch at them until they show us some light, shall we? There were 103 teams at the start of this 2022 Open Cup – the largest field of the modern era. Now there are two. One of them, Sacramento Republic, comes from the lower leagues. That means 24 MLS teams – with designated players and all the resources money can buy – are on the outside looking in. That’s a good number. How about the number 3? That’s how many MLS teams the Republic have beaten so far in 2022. Only two teams previously pulled this off, and they’re both legendary (The Rhinos of Rochester and the Minnesota Thunder). The Republic are the first non-MLS team since 2008, the Charleston Battery then, to reach a Final. Now there’s a chance to become the first since those legendary Rhinos of 1999 to crash the gates and win the whole thing. Orlando, and the number-one, awaits.

It’s a damned shame. Every round, every year, we say goodbye to half the playing field. You’d think it gets easier. But it doesn’t. That’s the Cup. No draws. No excuses. For you New York Red Bulls, it’s another year without an Open Cup crown to bring home. But two Semis in five years is reason to believe. There are no curses. And luck doesn’t stay out forever. We’ll see you next year. You too, Sporting Kansas City. Way off the pace in MLS league play, long-time KC coach Peter Vermes, who made a point to shake hands with Sacramento’s Coach Briggs and offer a few words of support and congratulations, pushed hard in the Open Cup. It was a chance for history. It would have been a fifth crown for the Kansans and made them the first MLS team to win five Open Cup titles and join the heroes of yesteryear Maccabee LA and Bethlehem Steel. But that rare achievement still awaits an owner. Next year’s another chance.

For now, let’s turn to Orlando, where, on September 7, one team will say the hardest goodbye…