Her grandfather, father and big brother have all rocked it on the football field, but U.S. Under-20 Women’s Youth National Team forward Simone Jackson is carving out her athletic future on the fútbol pitch.
August 9 2022
Featured

Simone Jackson would love to get a few reps in as a slot receiver for the University of Southern California football team, but at 5-foot-4 and 140 pounds, she knows that’s probably not a good idea.

Instead, the U.S. Under-20 Women’s Youth National Team forward will leave running past defensive backs to her older brother, John Jackson III (6-2 and 210 pounds), a junior wide receiver for the Trojans. She’ll stick to fútbol, where she creates non-stop havoc for fullbacks as she prowls the wing for the USC women’s soccer team, for which she scored five goals with eight assists as a freshman last season, and for the USA, which she’ll help lead into the 2022 FIFA U-20 Women’s World Cup in Costa Rica. 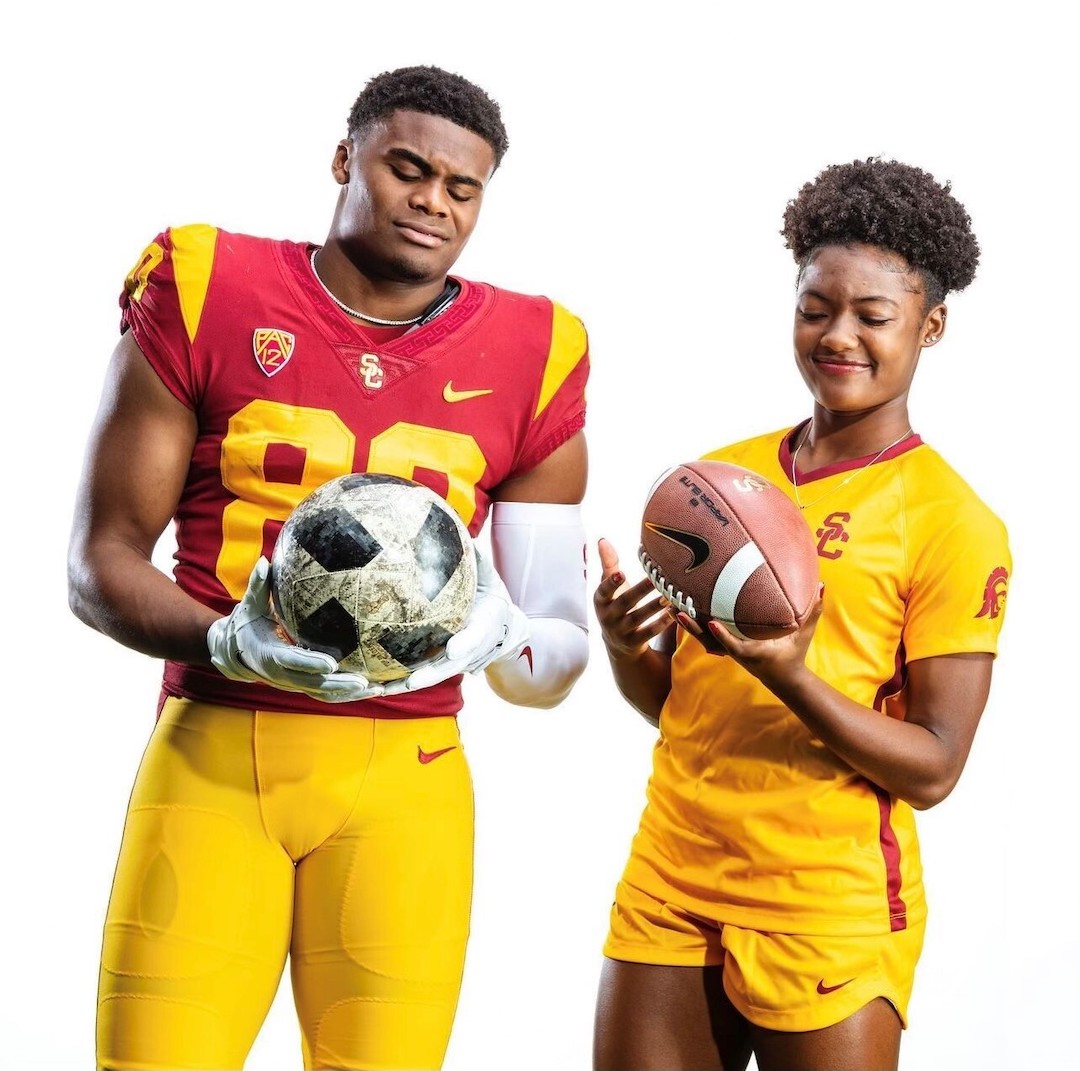 Although they won’t ever be actual teammates, the brother-sister bond they have is even stronger than any they’d forge sharing a field. John, four years older than Simone, has played and will continue to play a major role in her life as a big brother, role model, confidant and support system.

“As someone I look up to, he’s everything you’d want in a big brother and more,” said Jackson. “He’s always been so supportive of me, so kind, and never minded me tagging along and trying to do everything he did. Everyone wants to be around John. He’s just a personable guy and he does everything with flair. He may look intimidating on the football field, but he loves life and it’s contagious.”

Growing up in Redondo Beach in the South Bay of Los Angeles, John and Simone attended different high schools -- he at Serra in Gardena, and she closer to home at Bishop Montgomery -- and of course they played different sports. That meant many miles of driving for her parents on the freeways of Southern California, lots of homework in the car, scarfing down dinner in the mini-van, hundreds of club soccer games and plenty of cheering at each other’s sporting events.

Tiring? Yes. But for Simone, it was the best of times.

“I just loved it,” she said while also crediting her parents for their never-ending support and inspiration. “The weekends were eventful to say the least. We would call our trips “soccer-cations,” “football-cations” and “baseball-cations” because traveling all over the country became the new vacay. No one weekend ever looked the same and there was always lots of laundry to do, but then it was on to the next game.”

The Jackson kids come from an athletic family and have USC cardinal and gold running through their veins. Their dad, John Jr., set USC’s career pass receptions record with 163 catches from 1986-89 wide receiver, won the Rose Bowl and played in the NFL. He was also USC’s first double Academic All-American in football and baseball. He played baseball for USC as an outfielder, setting the school career mark for stolen bases (54) and leading the team in hitting in 1989 while batting .356. He would also go on to play professionally for four years in the Angels organization. Their grandfather, John Jackson Sr., was USC football’s running backs coach and offensive coordinator from 1976-81. Their mom, Ann Frances, ran track in high school and attended -- perish the thought -- UCLA. Simone’s younger brother, Jaden, is a high school freshman and talented baseball prospect.

Unsurprisingly, the Jackson household got quite competitive.

But through all that time, the siblings were pushing each other, making each other better. Simone didn’t exactly “follow” her brother to USC, but John’s being a Trojan and the legacy aspect played a big part in her college decision. So did the campus being so close to home and her eventual major: business administration with an emphasis in cinematic arts and a minor in screen writing and comedy. Yeah, she’s an LA girl. 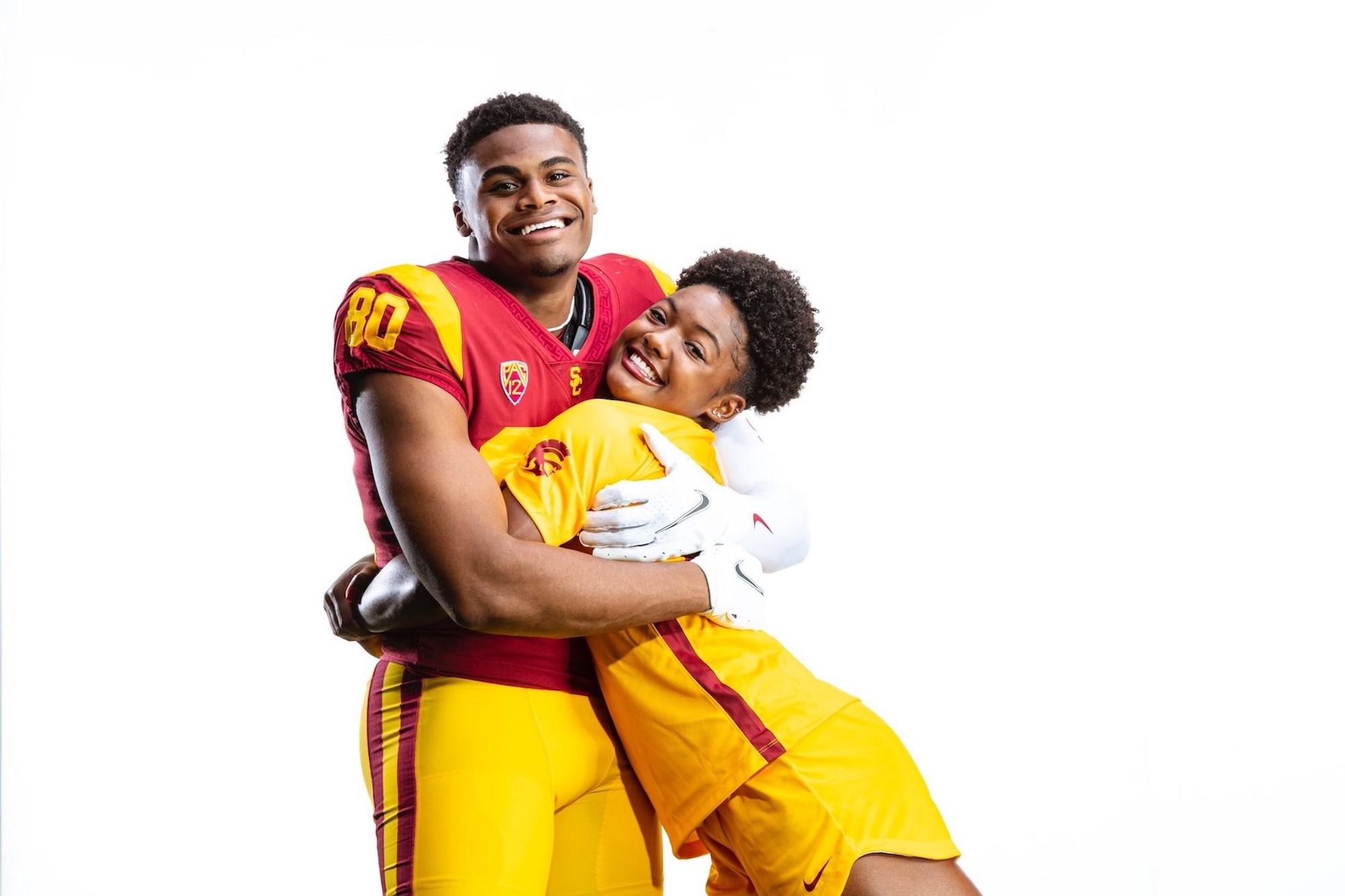 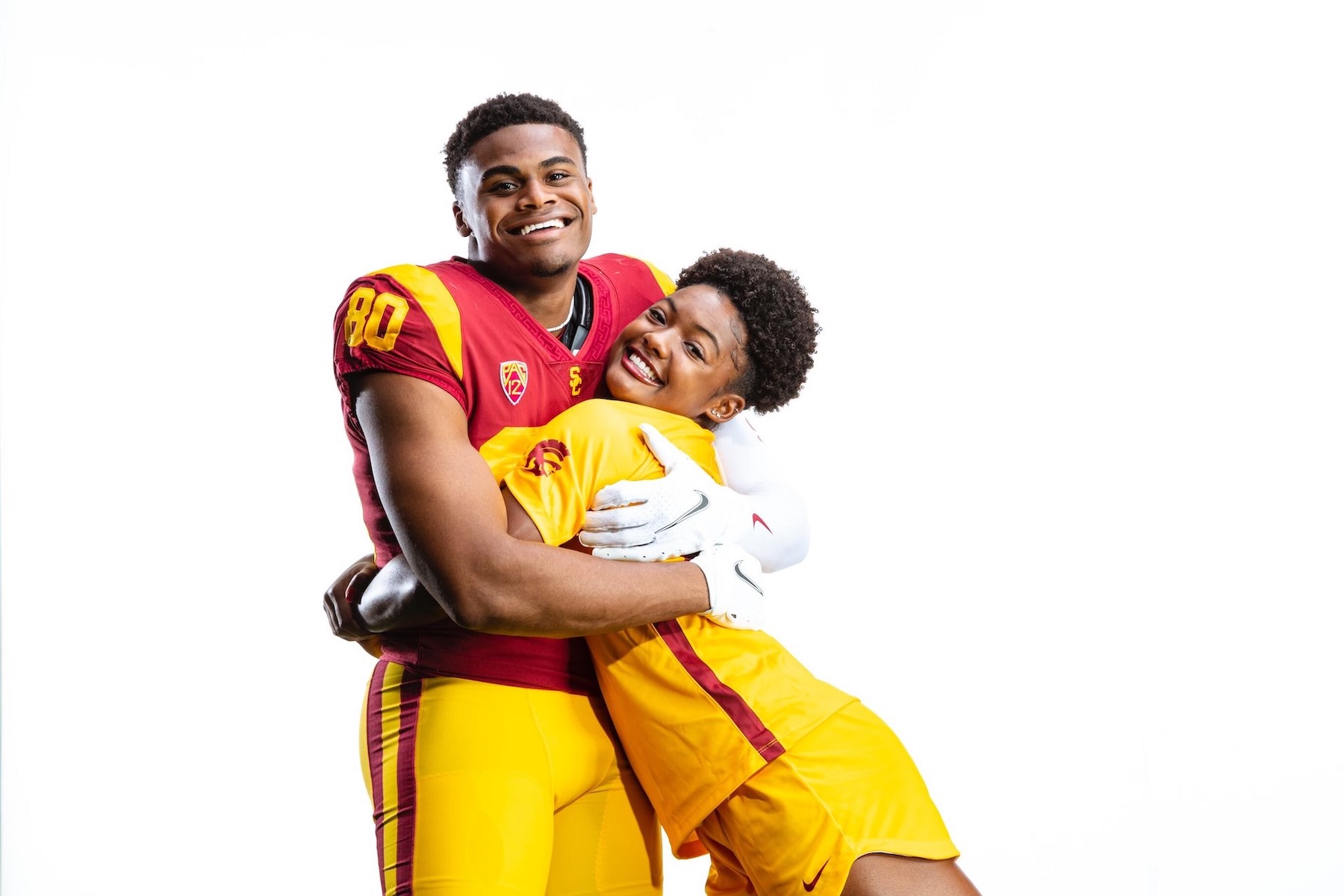 Some of her best memories as a youngster are from attending USC football games, at which her dad, the former USC star, was doing color commentary for the TV broadcasts. She would be decked out in USC gear and tag along with her brother, doing everything he did. Her college soccer schedule permitting, Simone is there when he walks out on the field at the historic Los Angeles Coliseum for his USC games to wish him good luck and to execute their special brother-sister handshake, which he reciprocates at her matches. In charming homage, Simone even wears #80 for the USC women’s soccer team, which is her brother’s number for the football team and her dad’s NFL jersey number.

While John has helped Simone develop as an athlete physically – she often tagged along and did his football speed and fitness workouts, and to this day still works with his trainer --- she gives him even more credit for helping her mentally, particularly when the world shut down due to the COVID-19 pandemic.

For many young people, especially those as outgoing and social as Simone, it was a tough time. No friends to see, no malls to shop at, no movies to attend and no soccer games in which to play.

“I’m not gonna lie, it got rough over COVID,” said Simone, who practically defines the word “effervescent” and whose 10,000-watt smile was turned upside down when the world came to a halt. “I didn’t want to do anything. The days were just blending together. At a key time in my soccer career, when I was just getting ready to go off to college, he was a comforting voice when I needed it and a willing ear when I needed to talk. He was the only one who could get me moving again. He’d be like, ‘let’s go run some hills,’ and off we would go.”

“During COVID, but also during our whole time growing up, he kept me focused and on the right path. He set the standard of what hard works look like. If John was going to train, I was going to train too. If he was putting in the extra work, I was as well. I just wanted to be like big bro.”

Now John will get to watch his little sis on the world’s stage as the USA will compete in the 10th FIFA Women’s World Cup for this age group.

The 19-year-old Simone, who has been in the USA’s Youth National Team programs since the U-14 level, saw her chance to play in a U-17 Women’s World Cup wiped away by COVID, so she’s cherishing this opportunity in Costa Rica just a little bit more. 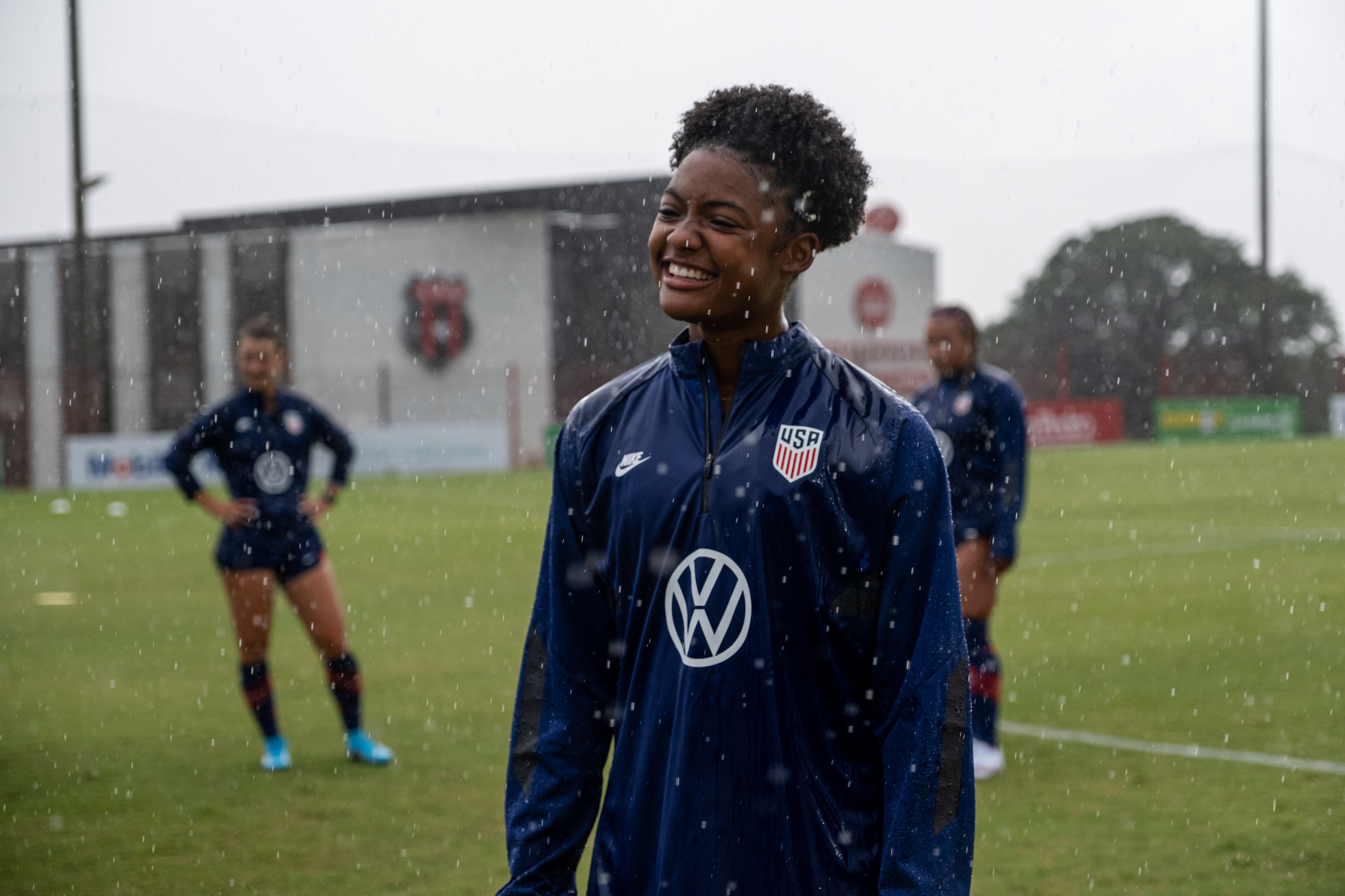 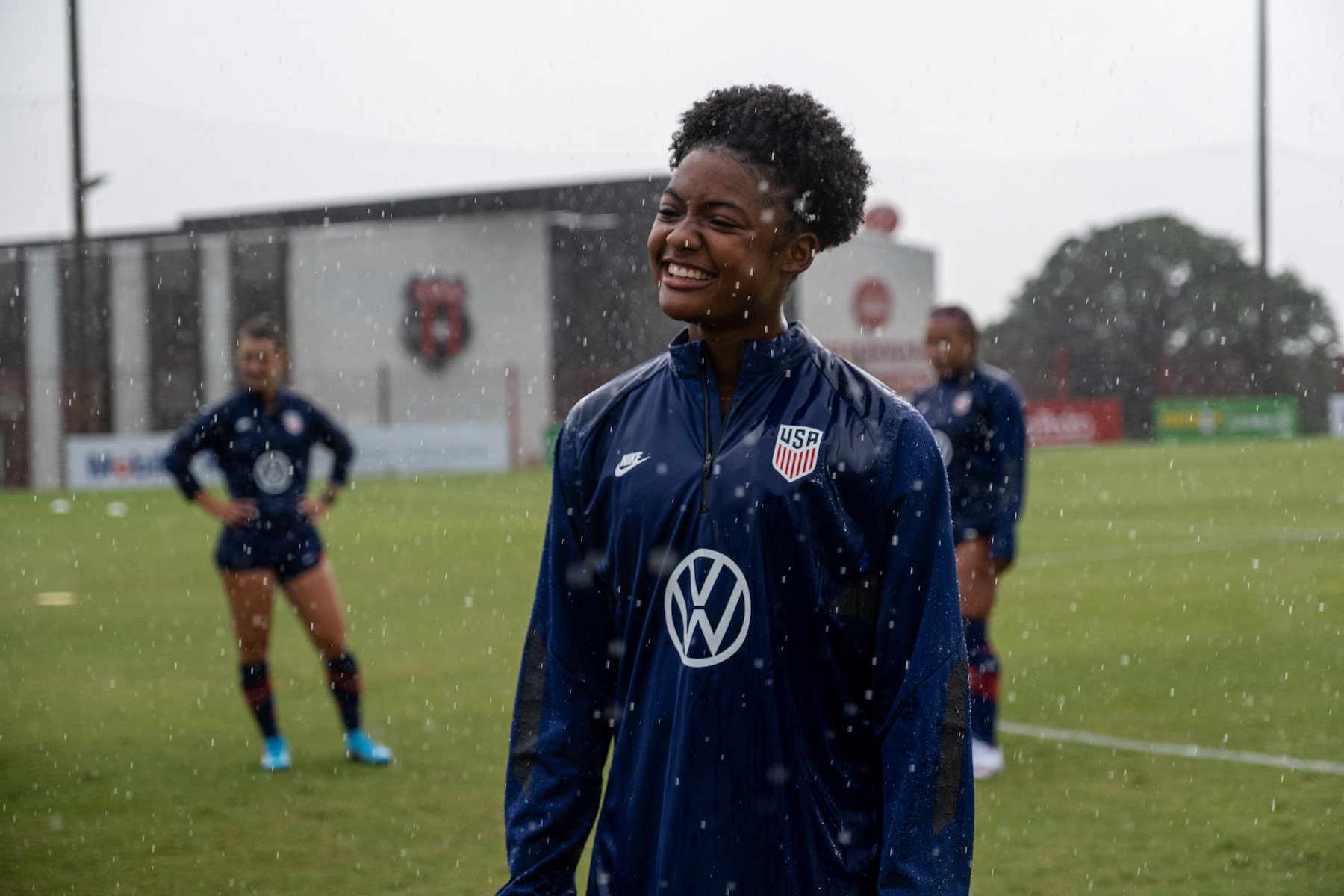 “To get the chance to represent our country is something we never take for granted,” said Simone. “And to do it with this group of girls is so special. We know there is a lot of pressure to succeed and to keep up the tradition of U.S. women’s soccer, but at the same time, we’re relaxed. We have confidence in each other and we’re going to fight for each other for 90 minutes or whatever it takes. That’s a good feeling to have going into such a big tournament.”

Simone’s strengths on the soccer field are infused with dynamism. She’s a slashing dribbler with speed, strength, unpredictability and sophistication with the ball, but don’t think she couldn’t translate that to the football field and catch some passes. She competed in the NFL’s Punt, Pass and Kick competition as a kid and can run a mean “out and up” route to get behind the defense, not unlike she does on the soccer field to get on the end of a long, flighted pass from a teammate.

“I can run routes,” she says. “Catch me at beach football! I never want to lose there either.”

Of course not. She’s a Jackson.