With the Final set to be hosted in Florida for the first time this year, usopencup.com takes a look back at the Sunshine State’s two previous brushes with American soccer’s oldest trophy.
Jonah FontelaAugust 24 2022
Open Cup

History will be made when Orlando City take the field at their sold-out Exploria Stadium on September 7. And while it will be the first Open Cup Final to be hosted in Florida in the tournament’s 108-year history, the Sunshine State has seen one of its teams lift the trophy and another come painfully close.

Florida’s first brush with the Cup came back in 1989, smack in the middle of the so-called dark days of American soccer. We were halfway between the folding of the old North American Soccer League, which promised so much and so explosively, and the yet-to-be-dreamed-up Major League Soccer.

The Open Cup, still known as the National Challenge Cup then, was the domain of amateur and semi-pro men’s league teams. And when the Kickers of St. Petersburg, Florida arrived in Saint Louis for the Final (all the Finals from 1984 to ‘89 were hosted at the Missouri city’s Soccer Park) they were considered underdogs against four-time champions the New York Greek Americans of Astoria, Queens – longtime powers of the Big Apple’s German-American (and later, Cosmopolitan) League.

“The game was a battle,” said Craig Fossett, the Kickers’ holding midfielder who did the dirty work for former Duke University star and 1989 Open Cup MVP Tony Valenti. “It was hot and the grass was long and nothing was easy that day. The game was right in the middle of the summer.” The St. Petersburg Kickers with their Open Cup medals in 1989

The temperature was 106 degrees at kick-off and the Final needed extra-time. Kickers coach Steve Gogas, out of ideas with ten minutes to go in the extra 30-minute period, took a look down his bench and spotted Gordon Singleton. He asked the striker, just 17 days out from major knee surgery, if he had it in him to take a penalty in the shootout that was looking like a certainty.

Singleton, his knee in a primitive metal brace, shrugged. “Why not?”

“I was definitely not supposed to play that day,” said Singleton, who’d had surgery a little over two weeks before the Final to repair a meniscus tear and a 15 percent lateral tear in the ACL. “The only reason I was even in uniform was because it was the only way to be on the bench.”

But rather than wait around for the uncertainty of penalties, Singleton, playing on one working leg, made good on a joke he’d made with teammate Andy Daxon on his way into the game. “Send the ball up to me,” he chuckled, running past. “I'll score and we’ll go get a cold beer.”

That’s exactly how it went, too.

Daxon sent a long, looping ball up from deep. “It went really high so I was able to get under it and beat the offside trap,” Singleton told usopencup.com. “ I chased it in all by myself. I was about 12 yards out, coming in off the right and I slipped the ball under the keeper [the outstanding Dragan Radovich, formerly of the NASL’s Portland Timbers and Washington Diplomats] and that was that.”

Every one of those Kickers players, who managed an exhausted lap of honor after the final whistle, knew the name Ray Hudson. They’d grown up watching the blond-haired midfield dynamo, nicknamed Rocky, who’d come from his native Newcastle in 1979 to join the raucous North American Soccer League.

The Kickers do a lap of honor after the 1989 Final in St. Louis

“I’d never heard of Fort Lauderdale, but they said it was near Miami and I thought, ‘oh, James-Bond Country’ so I said I’m there for sure – I’d always loved the Americana,” said Hudson, who, after captaining the Fort Lauderdale Strikers alongside legends Gerd Muller and George Best, went on to become the most creative voice in American soccer broadcasting. “It [Florida] became home. Spring break, and I never left.”

“But then there were the lean times,” Hudson said from his home outside Miami, describing the decade between the folding of the NASL and the start of Major League Soccer when he worked briefly in the pool business and entertained notions of opening a sports bar. “The national team was going nowhere, the pro leagues were sputtering. It was a desert and the poor players – such talented players – caught up in that, had nothing to go to.” When the Miami Fusion – the second of MLS’ Florida teams at the time – came on line in 1998, Hudson joined on the PR side. While he was “learning the ropes” and taking his firsts steps toward perfecting his broadcast bombast as local TV commentator for the team, the Fusion were suffering on the field.

When asked ahead of the 2000 season if he’d take over as manager for “three or four games,” until a new full-time boss could be brought in, Hudson shrugged. “Anything to help the club,” he said, despite never having before considered coaching.

“We hit the beach and gave the lads a little relaxation,” said Hudson, no stranger to Cup competitions. He vividly recalls being named man of the match in a sixth round FA Cup tie for Newcastle United against then-glamor side Derby County in 1975.

“There was the skeleton of a good team and we just needed to change the attitude,” he added.

“We were just the kids from Miami Beach,” chuckled former goalkeeper Nick Rimando, who, fresh out of college at the time, took over mid-year from Jeff Cassar as Hudson began to make his mark on the Fusion. “It was just fun. That’s how I’d describe that team. I remember the hotel lobbies and the bars – and everyone went out and demanded the best from each other on the field.

“Ray was such a players’ coach; he really brought the joy,” added Rimando, twice an Open Cup runner-up who represented the U.S. 22 times and won a pair of MLS Cups (D.C. United and Real Salt Lake).

Hudson, with a team that wasn’t likely to challenge for the MLS play-offs that year, saw the 2000 Cup as an opportunity to breathe new life into the flagging club. And his position at the helm soon went from interim to permanent. 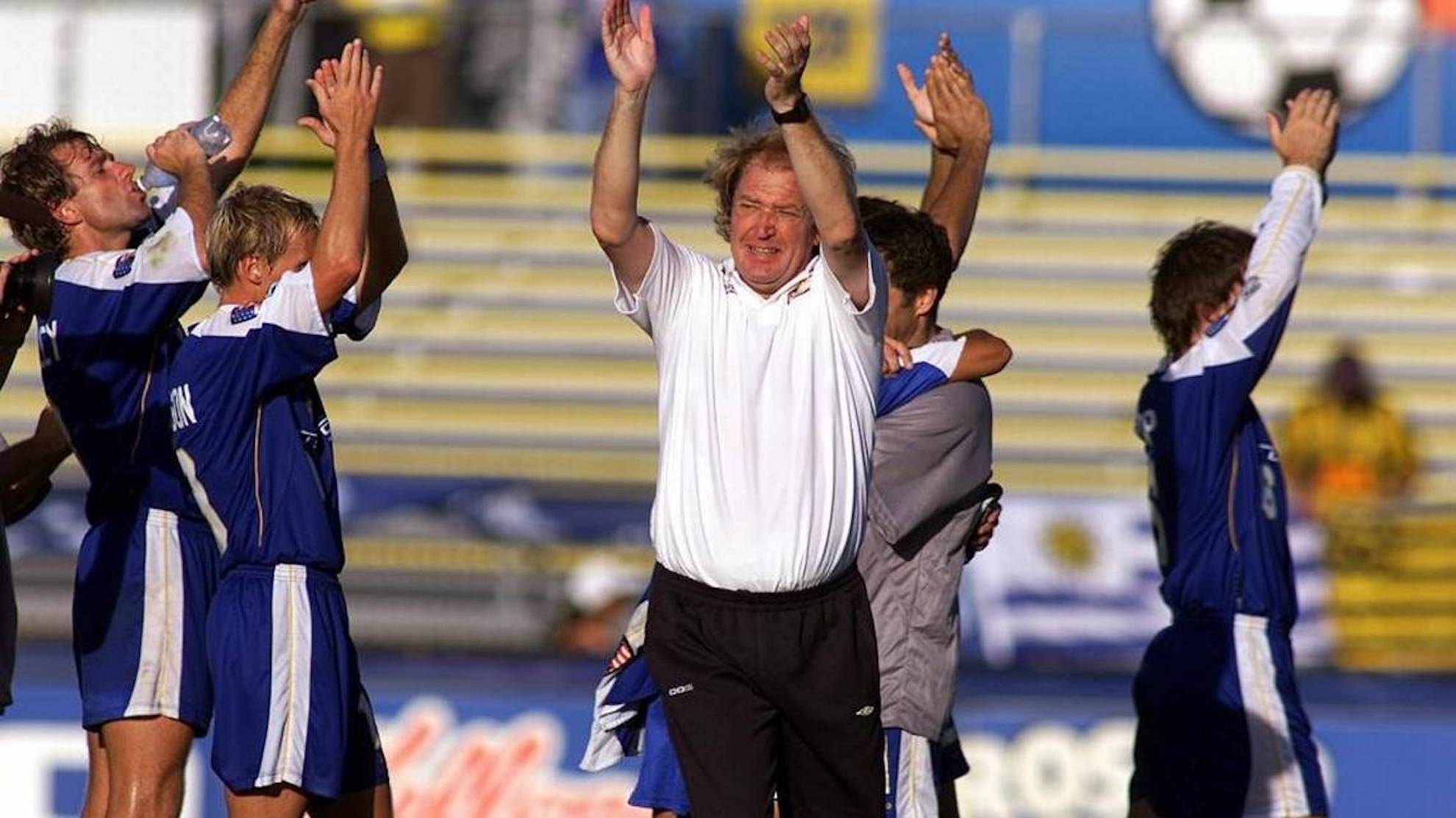 Hudson with the 2000 Miami Fusion (courtesy of the Miami Herald)

But that run to the Final almost ended before it started. After a 6-1 win over amateur side New Jersey Stallions, a trip to Saginaw, and the amateur Mid-Michigan Bucks, required a penalty shootout after finishing 3-3. “The game was played on a high school football field,” remembered Rimando with a burst of laughter. “And we almost lost – I mean that’s the beauty of the Cup right there.”

Hudson, now 67, never hesitates to name the players he admired in his first Fusion team – the likes of Diego Serna, Andy Williams and a young Pablo Mastroeni.

One moment of that run to the 2000 Final stands out best for the former coach. With the golden-goal rule still in effect, it took a 112th minute strike from captain Jim Rooney against a star-studded DC United at RFK for the Fusion to seal a 3-2 Quarterfinal result. “I ran on the field like me hair was on fire,” laughed Hudson, who built a swashbuckling, free-scoring side that amassed 16 goals in five Open Cup games. “Jimmy ran away from me and down the tunnel and I never was able to catch up with him.

“But that game showed how much these lads were up for the fight,” said Hudson, whose colorful press conferences became the stuff of legend.

After a 2-1 win in the Semifinals over Lothar Matthaus' MetroStars (now the New York Red Bulls), Miami’s Fusion fell in the Final up against a Chicago Fire team loaded with superstar names and well in the habit of winning. Hudson, always a generous sort, still feels for “poor Tyrone [Marshall],” whose late own-goal ended the fight and saw the Fire lift another trophy (2-1).

In the end, the Fusion were doomed. The writing was on the wall. With poor attendances and a lack of local interest, the league retracted the club at the end of the 2001 season despite Hudson’s new-look squad winning that year’s Supporters Shield and reaching the playoffs.

Hudson put in two more seasons on the bench at D.C. United before returning to his home in the broadcast booth (he’s currently the color commentator at south Florida’s latest top-tier soccer club, Inter Miami). But bittersweet memories of that plucky Fusion, and the 2000 Open Cup, stick with him.

“It was a happy pirate ship. The winds were against us and that team just enjoyed the battle,” said a wistful Hudson who, no offense to Orlando City, is rooting for second-division underdogs Sacramento Republic in this year’s Final from his adoptive home of Florida. “Who can’t want Sacramento?”