During its first week of training ahead of the 2022 FIFA World Cup, the U.S. Men’s National Team has welcomed some special guests to its “home away from home” in Qatar - Al Gharafa Stadium.

On Tuesday night, eight USMNT players and two coaches hosted 20 migrant workers who helped build the infrastructure behind the World Cup for some fun on the field.

The following day, the team welcomed nearly 1,000 U.S. military and embassy staff based in Qatar to the team’s training session for a special experience.

Migrant Construction Workers Get in the Game Alongside USMNT

Twenty migrant workers who constructed the infrastructure for Qatar 2022 got a special chance to take the field themselves Tuesday tonight, playing small-sided games and taking part in penalty-kick shootout alongside the USMNT.

The “Team 360’ event was organized by the Q22 Worker’s Welfare Department, with the players being chosen based on their success in participating in previous Worker’s Cup soccer tournaments held in Qatar.

Defenders Aaron Long and Tim Ream, midfielders Kellyn Acosta, Tyler Adams, Weston McKennie and Yunus Musah, plus forwards Jordan Morris and Christian Pulisic served as “coaches” for the workers, and several got in on the action. Gregg Berhalter and assistant coach Luchi Gonzalez also participated in the festivities.

“It was a good experience to meet some of the people who have built the stadiums and to hear some of their stories,” said defender Tim Ream. “It was fun. Football is a game for everyone. To share the field with them was a fantastic experience and something that was really, really enjoyable.”

Gregg Berhalter and several #USMNT players showed their appreciation to @FIFAWorldCup workers for their efforts in Qatar with some fun on the field tonight at our official training site in Doha, Al Gharafa SC Stadium ⚽️
Players joined the workers in some small-sided games. pic.twitter.com/dPrRRxh0C4

The USMNT contingent signed autographs and took photos with workers following the on-field activities to thank them for their efforts to make the tournament happen.

“When I got the opportunity, I really wanted to come and see who helped build Qatar for the World Cup. To me that was really special,” Musah said. “To see them and play with them was really nice. I’m glad they enjoyed meeting us.”

USMNT head coach Gregg Berhalter and the team wanted to show their appreciation to all those serving the United States in Qatar and extended an invitation for them to watch Wednesday’s training session.

Nearly 1,000 servicemen and women, embassy staff and their families attended practice from Camp As Saliyah, Al Udeid Airbase and the U.S. Embassy in Doha. Al Udeid is the largest U.S. military base in the Middle East.


Berhalter addressed the crowd at the start of training and thanked them for their service before teeing up midfielder Weston McKennie for some remarks. The son of a U.S. serviceman, McKennie met USMNT legends Carlos Bocanegra and Landon Donovan when the team visited Ramstein Air Base in Germany ahead of the 2006 FIFA World Cup. Sixteen years later, the Texan will compete on the global stage himself. 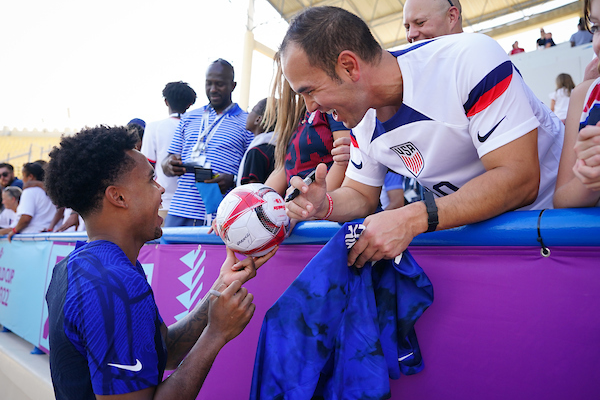 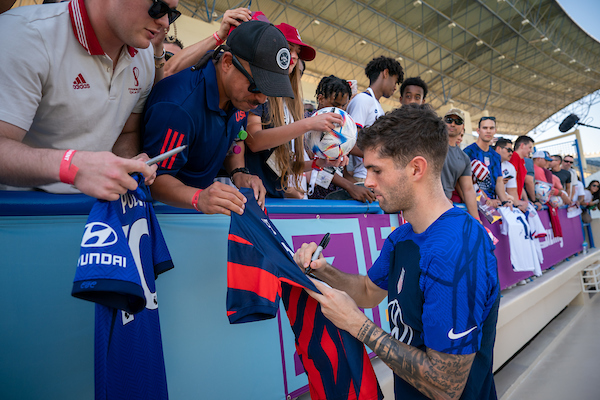 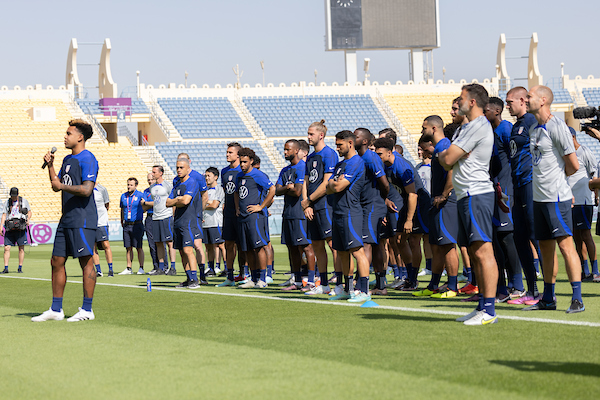 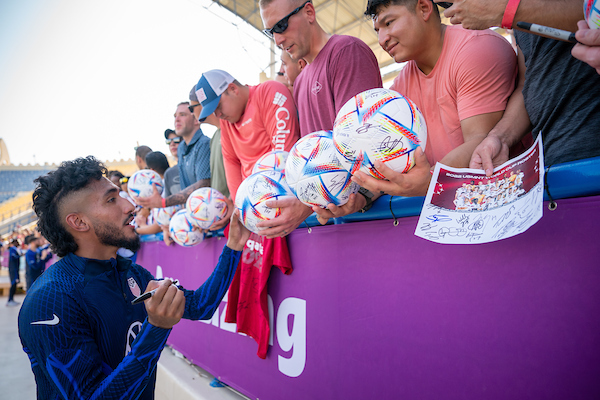 “We have anchors that we follow - brave, diverse, relentless - and I’m 100 percent sure those are qualities that you guys have and show every single day. The sacrifices that you guys and your families make are incomparable,” McKennie said. “We want to say thank you and we’re going do our best to represent you and represent the country the best way we can, just like you do in the service.”

Following the session, the players surprised the crowd by going to the stands to sign autographs and take photos.