After a big season with the New York Red Bulls and an important role at the 2017 FIFA U-20 World Cup, Tyler Adams made the jump to the U.S. Men's National Team and earned his debut in the side's year-end friendly at Portugal. Fresh off 90 minutes in Leiria, learn more about the journey of one of the MNT's rising young stars.

A HOMEGROWN FOR HOMETOWN CLUB AND U.S. SOCCER

Growing up in Wappingers Falls, New York, Tyler Adams would beg his mom, Melissa, to take him to Red Bulls games and any chance he could get to see the U.S. Men’s National Team. Adams’ first connection with Red Bulls came when he was introduced to the organization through the Red Bulls RDS (Regional Development School) program at the age of 10. Two years later, Adams joined the Red Bulls U.S. Soccer Development Academy U-13/14 team and quickly progressed to the U-15/16 Academy team.

In September of 2014, Adams joined the U.S. Soccer Residency program at IMG Academy in Bradenton, Fla. as the U.S. U-17s continued to prepare for the 2015 CONCACAF U-17 Championship, and ultimately, the FIFA U-17 World Cup. By signing his Red Bulls senior team contract in November of 2015 and later playing in his first official M.L.S. game with the Red Bulls’ first team, Adams became the first player in Red Bulls history to graduate the Red Bulls Regional Development School (RDS) program and progress all the way through the to a professional contract and debut. 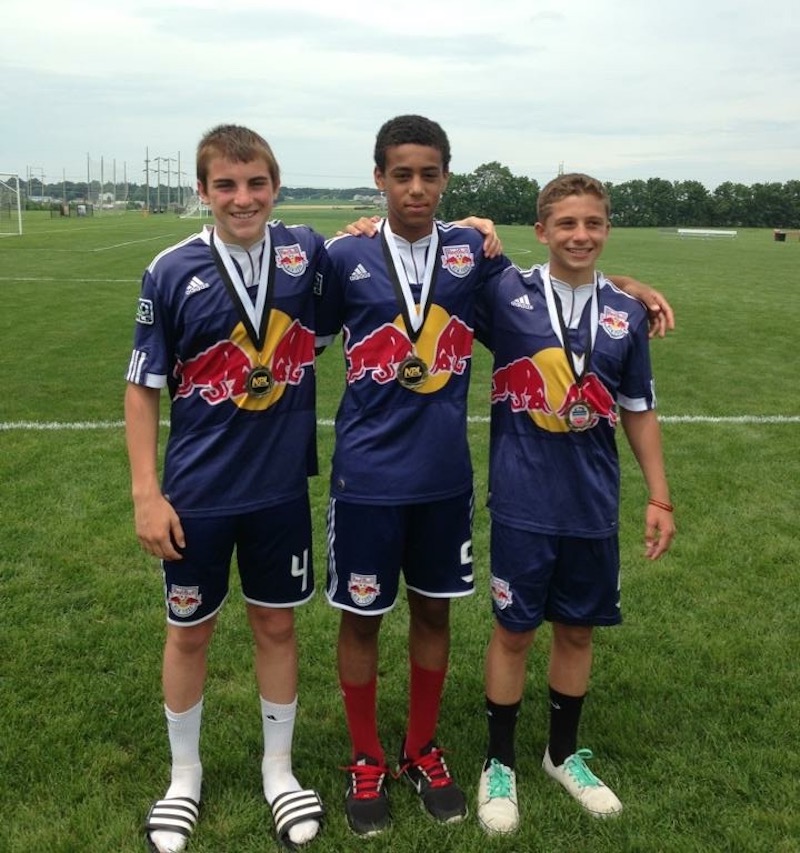 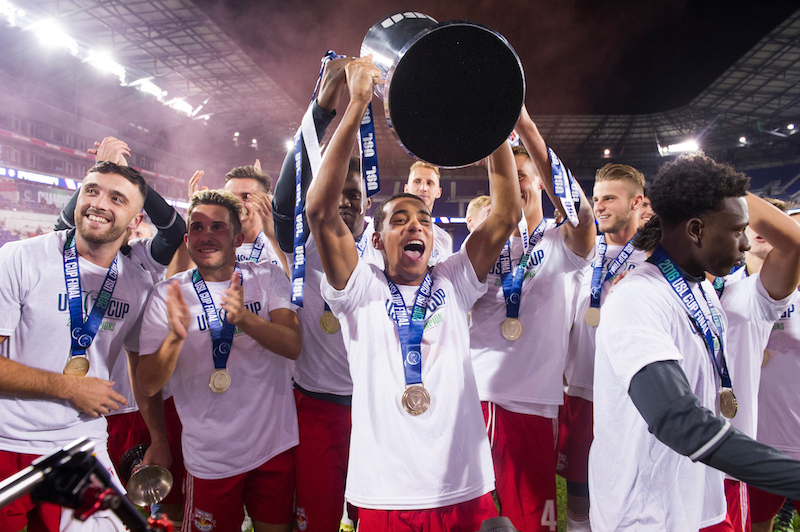 SCORING AGAINST CHELSEA IN HIS RED BULLS DEBUT

On July 23, 2015, Adams made his debut with the New York Red Bulls first team in an international friendly against the previous year’s English Premier League champions, Chelsea. In the 69th minute with the score tied 1-1, Adams headed a beautiful cross into the back of the net as the Red Bulls went on to win 4-2. The experience was a memorable one for Adams, to say the least.

“Stepping on the field with the likes of (Eden) Hazard, Diego Costa, all these big-time players, that’s a moment that you’ll never forget. Scoring my first professional goal in my debut in front of my family in Red Bull arena was the ultimate prize for me and I was so happy that I was able to do that. It’s a moment I’ll never forget.” 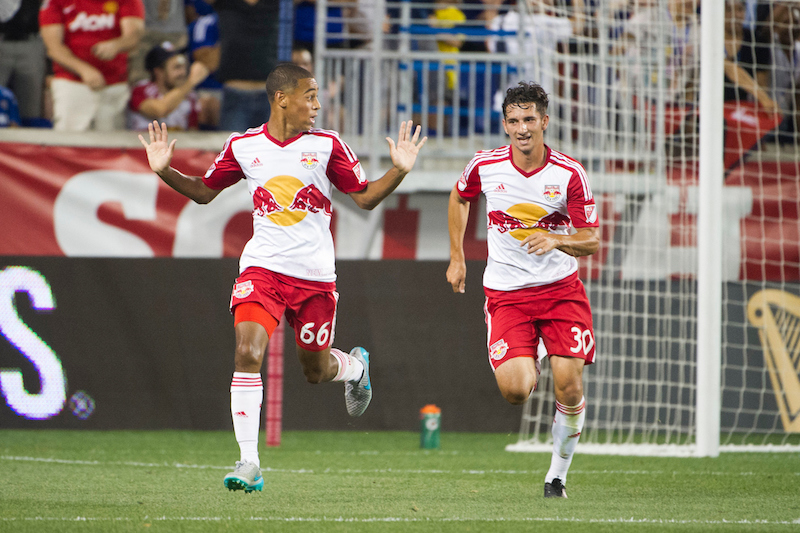 In 2015, alongside current Men’s National Team player Christian Pulisic and recent U-20 World Cup teammates Luca de la Torre and Auston Trusty, Adams played in all three of the USA’s matches at the 2017 FIFA U-17 World Cup in Chile. He came in as a sub in the USA’s first game against Nigeria and started the last two games against Croatia and host Chile. 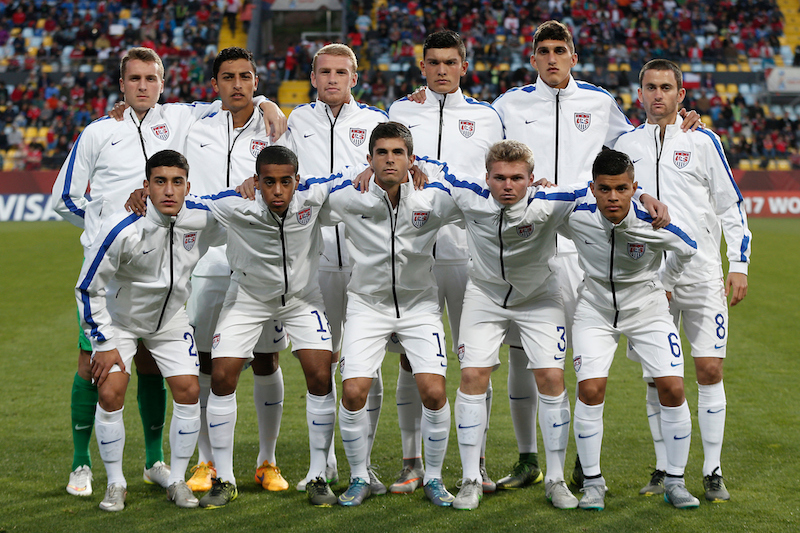 “We went to Chile in a tough group and didn’t come out with the results that we wanted,” Adams said. “But the experiences that I’ve gained and brought back are going to help me progress through to the next stage.”

Those experience saw Adams become a staple for the USA’s 2017 FIFA U-20 World Cup squad. He was a consistent presence in South Korea this summer, starting all five of the USA’s matches in the team’s run to the quarterfinals and playing every minute of the group stage.

When asked about who some of his immediate soccer mentors are, Adams is quick to point out current and former Red Bulls players Sacha Kljestan and Dax McCarty. Both players have also provided Adams with the unique insight of having experience representing club and country.

“They (Dax McCarty and Sasha Kljestan) have both encouraged me so much to keep working hard,” Adams said. “They are both National Team players now and they are both M.L.S. veterans that have made their case and proven who they are. They are well respected around the league and they are definitely people that I look up to and mimic my game off of. At the same time, they are class off the field as well. They are such good people to have in the locker room around you, and that’s something that I recognize.”

Well done @tyler_adams14 and the rest of the squad. Keep it going. We will be watching! 👊🏻 https://t.co/HSJMfqVrNi 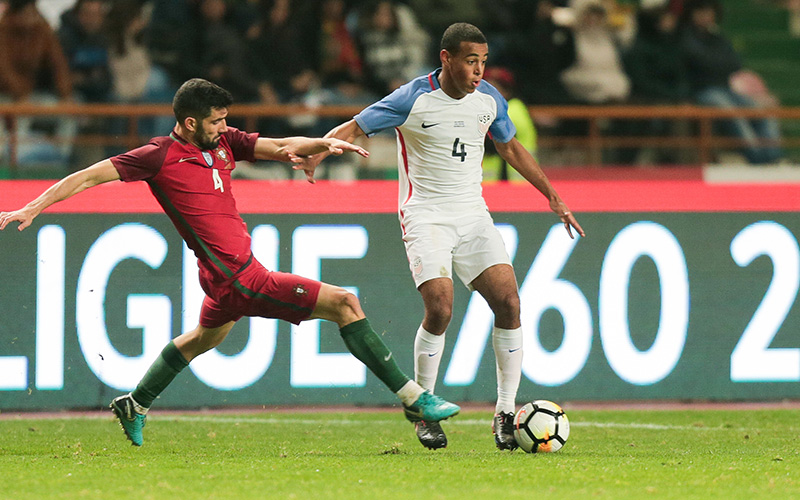 After helping Red Bulls II to the USL title in his first full professional campaign, Adams made his regular season MLS debut on April 16 against San Jose. This year Adams graduated to the first team full-time, where he became a key cog in a successful season for Jesse Marsch’s squad.

Adams was pivotal in the Red Bulls’ run to the Lamar Hunt U.S. Open Cup Final. In the team’s thrilling come-from-behind 3-2 semifinal victory against FC Cincinnati, he teed up Bradley Wright-Phillips for the equalizing goal in the 77th-minute.

The young midfielder also helped the Red Bulls to sixth place in the East, clinching the conference’s final playoff spot and setting-up a Knockout Round showdown against mentor Dax McCarty’s Chicago Fire. Playing in Chicago, Adams found his other mentor, Sasha Kljestan, in front of the net with a well-played cross to put New York up 2-0 in the 11th minute, leaving the Fire with an insurmountable deficit.

After a big year for club and country, Adams received his first MNT summons for a friendly at Portugal in November 2017. Marking a new era for the side, the 18-year-old joined Weston McKennie and Cameron Carter-Vickers in making his senior debut, going the full 90 minutes on the right side of midfield as the U.S. draw 1-1 with the reigning European champions on Nov. 14. Adams twice nearly joined fellow debutant McKennie in scoring in his international debut, seeing a one-time effot saved in the 20th minute, before his point-blank header at the back post was also kept out in the 52nd.

“I had goosebumps, but more than anything excitement," Adams said of his strong debut. "I think all the guys this week have made it very easy for me to get settled in and acclimated to the group, so I went out there with full confidence and I was happy with the performance.”