The top two teams in the FIFA Women’s World Rankings highlight the opening match day of the 2018 SheBelieves Cup as the USA takes on Germany at MAPFRE Stadium (7 p.m. ET on ESPN2) in Columbus, Ohio.

The third edition the most elite four-team women’s international tournament in the world features four of the top-six teams in the current FIFA Women’s World Rankings: No. 1 USA, No. 2 Germany, No. 3 England and No. 6 France.

The world's best have come to 🇺🇸. Meet the squad that will compete for the #SheBelievesCup 🏆 » https://t.co/yuLVzmjHjN pic.twitter.com/rzTzmOVDxS

Champions Collide: The USA and Germany are two of the most success women’s soccer nations in history. The teams have combined to win 10 out of the 13 world championships in women’s soccer history. The USA has won three Women’s World Cup titles and four Olympic gold medals while Germany has two Women’s World Cup titles and one Olympic gold medal. This will be the 33rd all-time meeting between the USA and Germany. The USA is 21-4-7 all-time in the previous 32 matches. The USA also defeated West Germany twice, in 1988 and 1990.

The U.S. has won the last two meetings at SheBelieves Cup tournaments, 2-1 in 2016 as Alex Morgan scored a magnificent goal and Samantha Mewis tallied the game-winner, and 1-0 in 2017, as Lynn Williams scored. This will be the second time the two teams meet in Ohio. The USA defeated Germany 4-0 on March 22, 2010 in Cleveland in a match that featured the 130th and final international goal for Kristine Lilly.

What to Know About Germany: Germany returns 14 players from its 2017 SheBelieves Cup roster, including forwards Mandy Islacker, Alexandra Popp and Hasret Kayikci, as well as superstar midfielder Dzsenifer Marozsán, who plays with U.S. midfielder Morgan Brian at Olympique Lyon in France. Nine players on the Germany roster saw action against the USA at last year’s SBC, including seven starters. Since last year’s SheBelieves Cup when Germany lost to the USA, 1-0, tied France 0-0 and beat England, 1-0, the team has gone 8-2-1. Quality wins have come against Canada (2-1), Brazil (3-1) and at the end of 2017, a 4-0 win against France in a friendly played in Bielefeld, Germany. Counting the 2017 SheBelieves Cup, Germany is 9-2-1 over their last 12 matches. In their nine wins, they have outscored opponents 32-3. In the three other matches, they have been outscored 5-3. 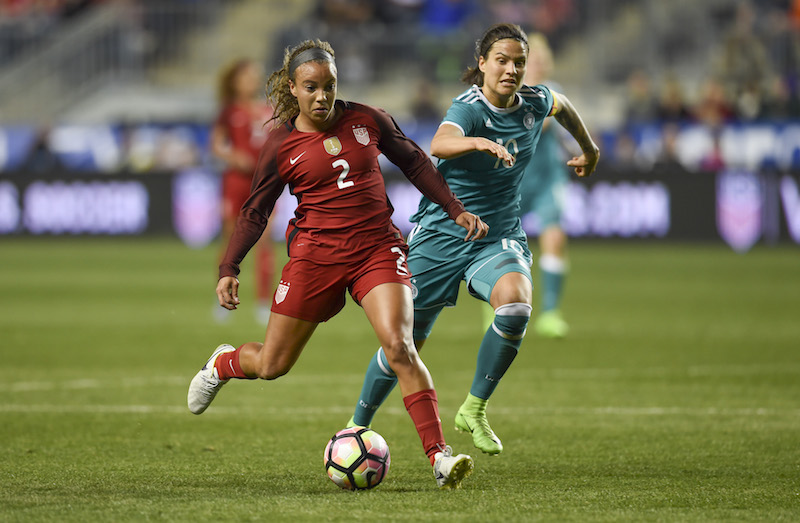 Closing in on 100: Two players will have a chance to get closer to the century marks when the USA takes on Germany on Thursday. First, Carli Lloyd is currently sitting at 98 goals and with two more could become the sixth player in WNT history to reach 100 for her country. Christen Press is on 97 caps and with three more appearances (which could happen during the SheBelieves games if she were to play in all three games) would become the 37th woman in U.S. history to get the centennial honor.

Women in Charge: Three of the four coaches in the tournament are women: the USA’s Jill Ellis, Corinne Diacre of France and Steffi Jones from Germany. These will be the first matches in charge for England’s new head coach Phil Neville, a former Manchester United and Everton star and England National Team defender. Watch: Ellis Blazes Trail for Female Coaches

In Columbus: The U.S. Women have played at MAPFRE Stadium (formerly Columbus Crew Stadium) seven times. Most recently in Columbus, the USA said goodbye to legend Heather O’Reilly in a 9-0 victory against Thailand during her farewell game on Sept. 15, 2016.

2018 SheBelieves Summit: In conjunction with the tournament, U.S. Soccer is hosting its first SheBelieves Summit in New York City on March 3, 2018. The 2018 SheBelieves Summit is a day-long event to celebrate opportunity, empower attendees and equip young women with the inspiration, tools and connections to pursue and accomplish their goals - in life, in school, on fields and in their future careers. The event will feature notable female speakers representing sports, entertainment and business who will share their personal and professional insights for greatness. Registration.