Somos - Unidos! and We Are - United! These are the call-and-response chants you hear most at New Mexico United games. Their rise and fall fill Isotopes Park and away-day buses like the one the Curse (the club’s official supporters group) rented and drove over ten hours to Dallas last month for the 2019 U.S. Open Cup’s Round of 16. “United, that’s us man,” the team’s attacking talisman Kevaughn Frater summed it up best to ussoccer.com. “It’s not just a slogan here – it’s for real.” 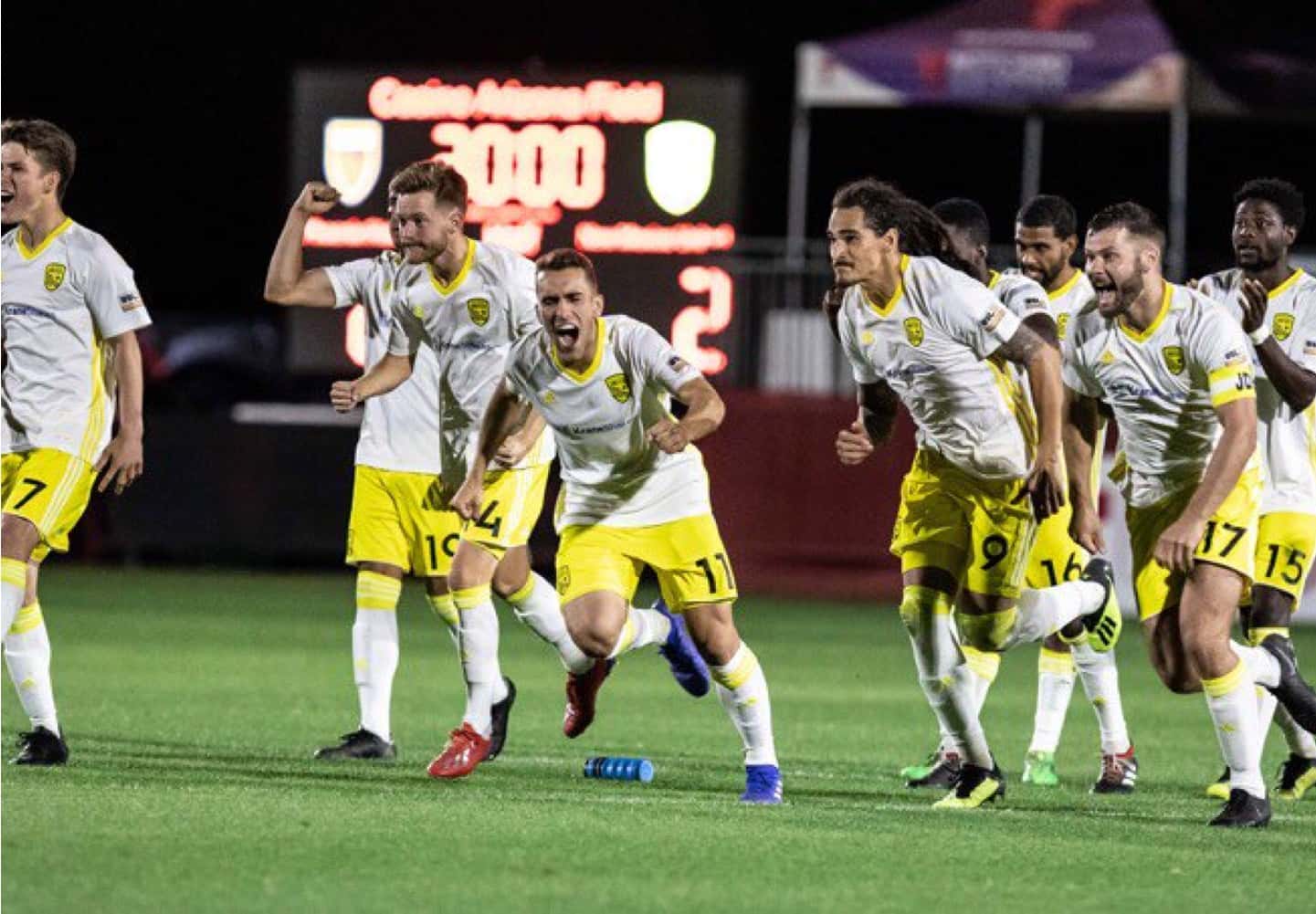 After the winning penalty against Colorado Rapids

Such is the buzz New Mexico United have caused in their first five months as a club, it’s hard to imagine the American soccer scene without them. They’ve been drawing an average of 12,000 fans to home games on Avenida Cesar Chavez in Albuquerque. And many of those fans hit the long, lonesome highway to follow their boys on what is turning into an epic countrywide road show in this, their first-ever Lamar Hunt U.S. Open Cup.

It’s never easy being away from your normal routine, your family and out on the road for such long stretches,” said head coach Troy Lesesne, a lean and thoughtful man. “That said, this Open Cup is a tremendous opportunity and it’s a special time for our club. A first-year club, having the kind of opportunities we’re having – we have to make sure we take advantage of this moment and grab it with both hands.”

It’s tough not to get caught up in the energy coming out of New Mexico United. Three of their four Open Cup games so far went to penalties or extra-time and all them have been on the road – in venues as far away as Denver, Colorado and Dallas, Texas. Their last two wins, epic triumphs over the Rapids of Major League Soccer and 2016 Open Cup champions FC Dallas, have made this freshman second-division club the toast of America’s oldest soccer tournament. And in the team itself, the spirit of the underdog fighting adversity and the Establishment both, is alive and well. 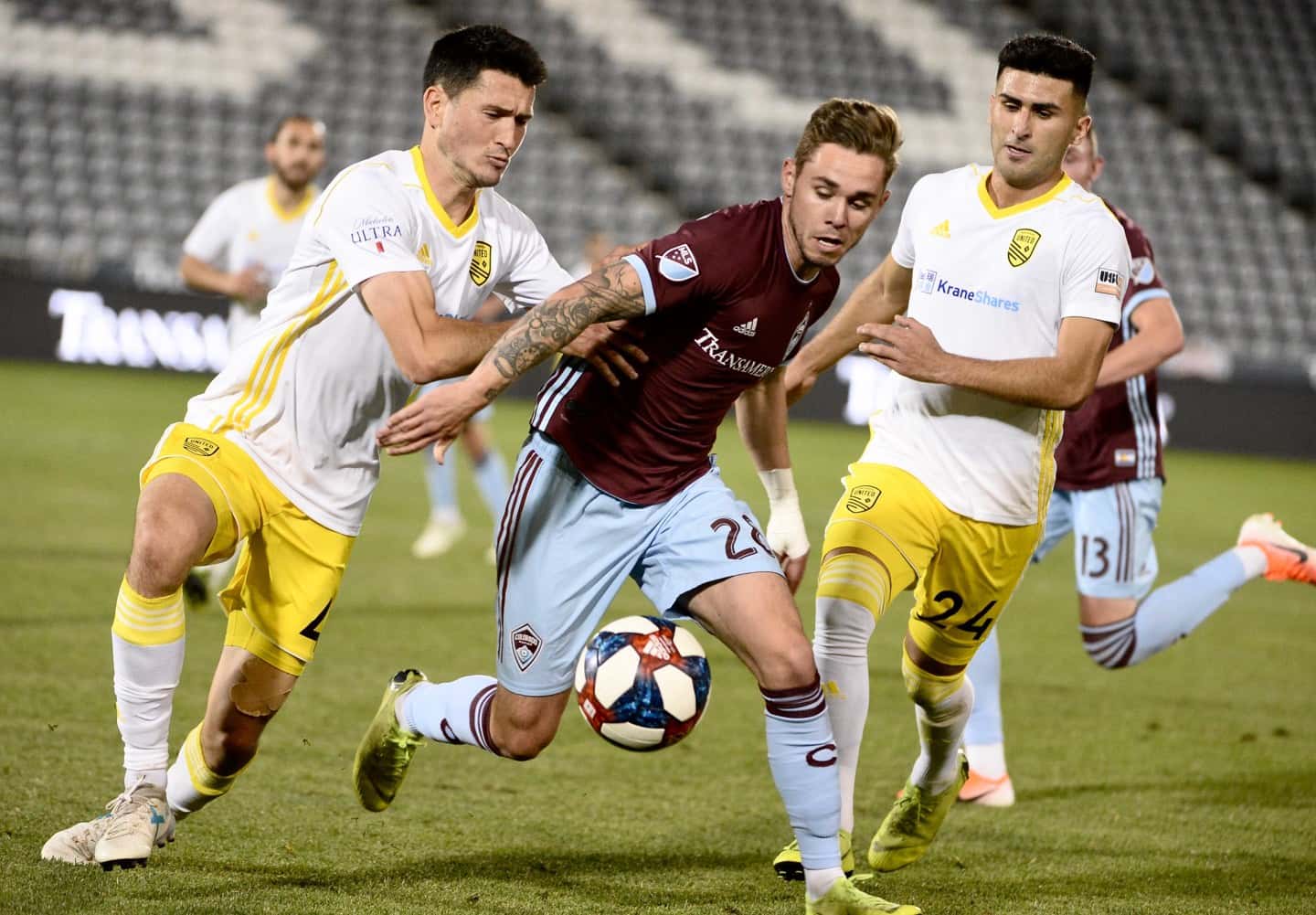 New Mexico United are getting set for their fifth Open Cup game on the road.

“It’s fun being the underdog. I enjoy it. It reminds me of when I was a kid and at tournaments and the kids from other places would dismiss us and say ‘oh it’s just that team from New Mexico so don’t worry,’” remembered Devon Sandoval, who’s got three goals for United so far in the Cup and is a proud native son of New Mexico. “It kind of feels like that now, like we’re going away on all these road games and coming from behind and going to penalties. We’re going toe-to-toe with everybody and pulling off upsets.”

You can’t miss Sandoval on the field, with his long dreadlocks reaching down to the middle of his back. He had his time in MLS with Real Salt Lake, and now – as a veteran with his striving hometown team – he’s got a chip on his shoulder. “We’re the team from New Mexico and that’s what I care about,” said the striker, not making too much of the fact that his side are one of just two USL Championship teams still in pursuit of the Cup. “I want to represent my home. My state. And I want to do it on the biggest stage possible.” 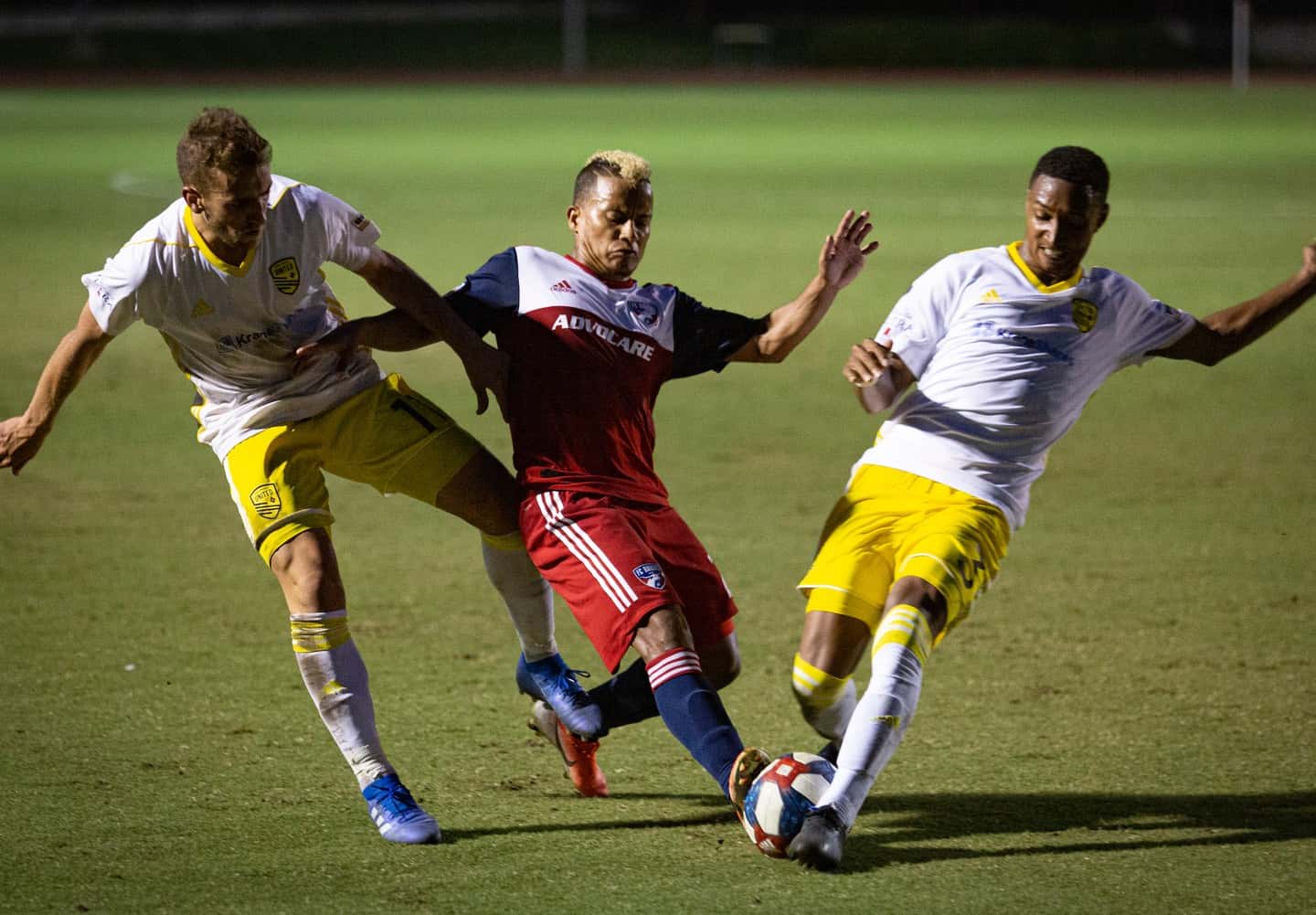 When Sandoval was playing in high school, it wasn’t unusual for a couple thousand fans to show up to games. When he was a University of New Mexico Lobo, 7,500 fans regularly came out for NCAA Tournament games. “I knew this place, if it got the opportunity, would be perfect. I always thought there needed to be a professional team here,” said Sandoval, pleased at the sight of New Mexico United’s unmistakable black and yellow logo popping up all over town. “You see the crest everywhere around here and the billboards up over the road. We’re doing it the right way and that matters.”

There’s a buzz in Albuquerque. There’s no doubt about it. On the road in their fourth straight Cup game, nearly 1,000 fans made the trip. They outnumbered the Rapids fans and were far noisier – especially when Jamaican sensation Frater stunned the home team with a late goal to force extra-time and eventually a shootout. “These fans just show what New Mexico is all about,” said Frater, who has three crucial Open Cup goals this year and has also been outstanding in USL Championship play (where United sit in seventh with a game in hand and within touching distance of third place). “These are really good people here and the way they get behind us is just amazing. New Mexico is all about the love. It’s about the connection and what we’re doing, it’s for the community. We’re United and we’re bringing people together.” 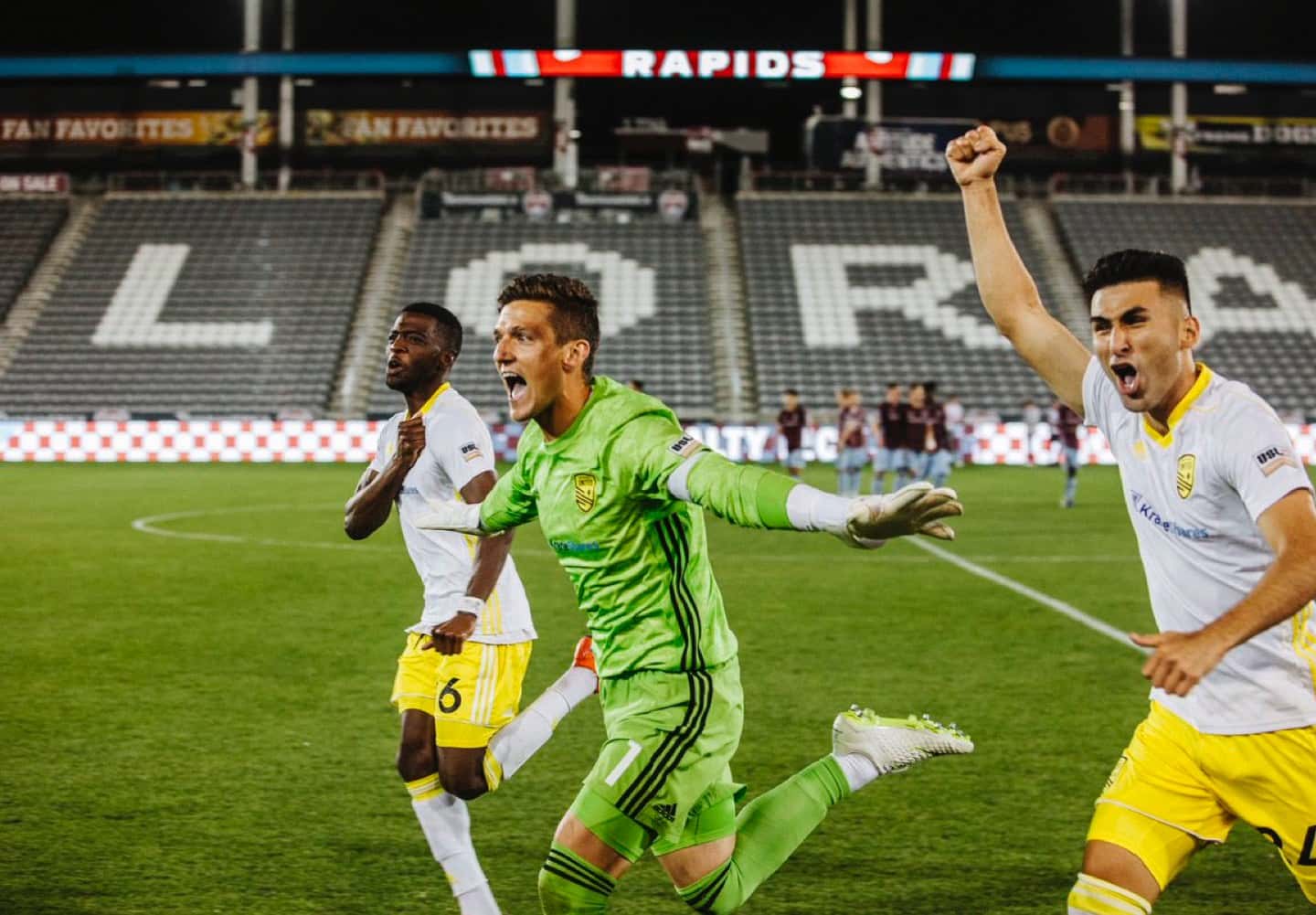 After wins over the Rapids and FC Dallas, United now face MNUFC in the Quarters

Opportunity and adversity are watchwords for Frater, Lesesne and Sandoval – for everyone at this new club making waves in the American game. Their next outing – a Quarterfinal on the road against another MLS team at Minnesota United’s brand-new stadium in Saint Paul – will be another test of their character and guts. It will be a test made all the more difficult without Frater, whose three yellow cards in tournament play resulted in his suspension for the Quarterfinal.

“Nothing’s going to be rosy all the time,” said Frater in his accent from the streets of Kingston. “It’s not going to be perfect. But you test your true character when you face adversity. That’s when the real stuff comes out. You only get stronger in adversity.”

Frater won’t be alone chewing his fingernails up in the stands at Allianz Field. There’s a plane heading from Albuquerque to Minnesota – and it will be loaded with those same United fans who’ve been helping drag their boys through all their challenges so far. The call: We Are and the response: United! “This is the really important thing and not just for me,” said Sandoval, making no mistake about the pride he feels in his hometown team and the fans who’ve popped up from the dry ground to help it grow. “As a local, it’s so cool to see how much we’re connecting with the community here.”

“Our fans can stack up against any in MLS,” added Lesesne, who celebrated with his players and that noisy traveling band in Denver and Dallas too. He’s eager to do so once more in Saint Paul. “It’s not just the numbers, but they always show up in voice too. You know they’re there. I don’t think I’ve ever seen a club and fans connect so quickly. And it works both ways. They show up for us, and we show up for them and try our all to get those wins.”