Fresh off a third straight clean sheet in its 2-0 Semifinal win against Costa Rica, the U.S. Men’s National Team heads to the Bay Area in search of its sixth confederation championship when it faces Jamaica in the 2017 CONCACAF Gold Cup Final on Wednesday, July 26. Coverage from Levi’s Stadium in Santa Clara, Calif., begins at 9:30 p.m. ET on FS1, Univision and Univision Deportes Network. Fans can also follow the game live on Facebook and Twitter at @ussoccer and @ussoccer_esp.

U.S. MNT EARNS 2-0 SEMIFINAL WIN VS. COSTA RICA ON HISTORIC NIGHT IN DALLAS
Large spells of possession saw the U.S. MNT dominate its Semifinal clash with Costa Rica, but it took 72 minutes for the side to break through when substitute Clint Dempsey provided a highlight reel pass to Jozy Altidore to give the USA the ice breaker. Just 10 minutes later, Dempsey cleverly curled his free kick around the Costa Rica wall to tally his 57th career goal and tie Landon Donovan for the U.S. MNT’s all-time goal-scoring lead.

Jordan Morris nearly gave the U.S. a dream start when he smacked his effort off the right post just 12 seconds into the match, while goalkeeper Tim Howard kept the U.S. in the match with two crucial saves on both sides of halftime to aid in the USA’s 2-0 win. The veteran net minder combined with the U.S. back line for its third-straight clean sheet and his 42nd career shutout.

With the win, the U.S. MNT also became the first team to earn a place in 10 CONCACAF Gold Cup Finals.

JAMAICA ARRIVES IN SECOND-STRAIGHT FINAL, SETTING UP 2015 REMATCH
Though Mexico was favored in Sunday’s second Semifinal, it was Jamaica that earned the victory, hanging tough before using New York Red Bulls’ defender Kemar Lawrence’s 88th minute free kick to collect a 1-0 victory against El Trí and a place in its second-straight Gold Cup Final. The win makes Jamaica the first nation outside the USA and Mexico to earn a place in back-to-back Finals, and sets up a rematch of the 2015 Semifinal when The Reggae Boyz utilized goals from Darren Mattocks and Giles Barnes to defeat the USA 2-1 in Atlanta.

The U.S. will now look to exact some revenge for that defeat as it seeks its sixth confederation championship in Wednesday’s Final at Levi’s Stadium in Santa Clara, Calif.

DEMPSEY TIES DONOVAN’S RECORD IN LONE STAR STATE
Not only did Dempsey play a crucial role in the U.S. MNT’s Semifinal win, it came in storybook fashion. Dempsey hit home the historic strike in suburban Dallas, where he used to travel three hours each way to train and play with elite youth club, Dallas Texans.

Dempsey had 27 family members and friends in attendance at the match Saturday to witness him become the USA’s joint leading scorer, doing so in his 136th cap, 19 matches less than Donovan tallied his 57th goal.

Additionally, Dempsey’s assist on Jozy Altidore’s opening goal was his second in as many matches and took his career total to 20, pushing him past Claudio Reyna into sole possession of third on the MNT’s all-time list. 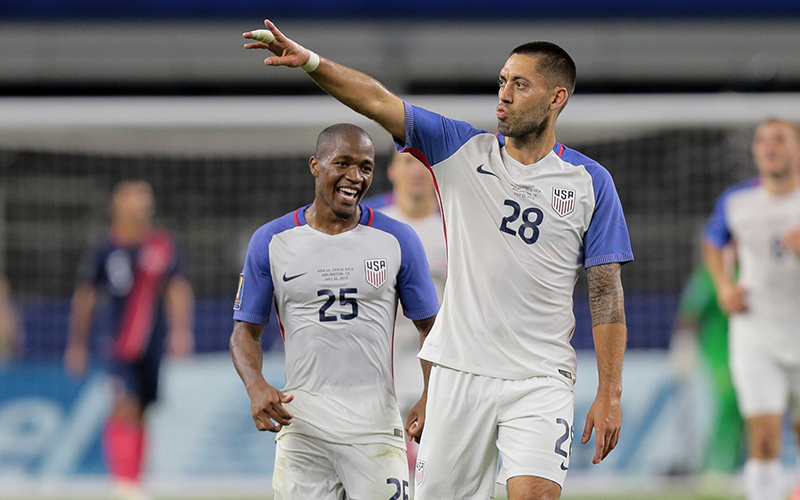 A RECORD TENTH CONCACAF GOLD CUP FINAL
With the win on Saturday night, the U.S. MNT became the first team to reach 10 different CONCACAF Gold Cup Finals. The USA and rival Mexico have dominated the competition since the first event in 1991, combining for 12 of 13 championships and 19 Finals appearances. Only seven other nations – and five from CONCACAF – have ever made it a Gold Cup Final.

ARENA CONTINUES SUCCESSFUL START TO SECOND TENURE
Having already set a new mark for longest undefeated streak at the start of a U.S. MNT head coaching tenure, the team extended its record to 13 matches unbeaten since Bruce Arena returned to the post he previous held from 1998-2006. The USA has gone 8-0-5 during Arena’s second tenure, keeping seven clean sheets while outscoring opponents 25-7.

NINE DIFFERENT PLAYERS FIND THE BACK OF THE NET
With 11 goals in five matches, the USA leads all teams in scoring at the 2017 CONCACAF Gold Cup. The MNT has received its scoring punch from all over the field, with nine different players finding the back of the net to push the team to Wednesday’s Final. Interestingly, that number isn’t even a record, as the U.S. utilized goals from 10 different players during the 2009 tournament. The current total is tied with 2013 for second-most all-time at the Gold Cup.

TIM HOWARD SAVES ABOUT QUALITY NOT QUANTITY.
One of the six roster additions following the Group Stage, U.S. MNT goalkeeper Tim Howard has combined with the back line to keep two clean sheets since joining up with the squad. While Howard has been called into action for only three saves in those matches, each have been vital, coming when the U.S. was sitting 0-0 with both El Salvador and Costa Rica.

The veteran netminder spoke at length about how he’s honed going from long periods of inactivity into making saves in big moments. 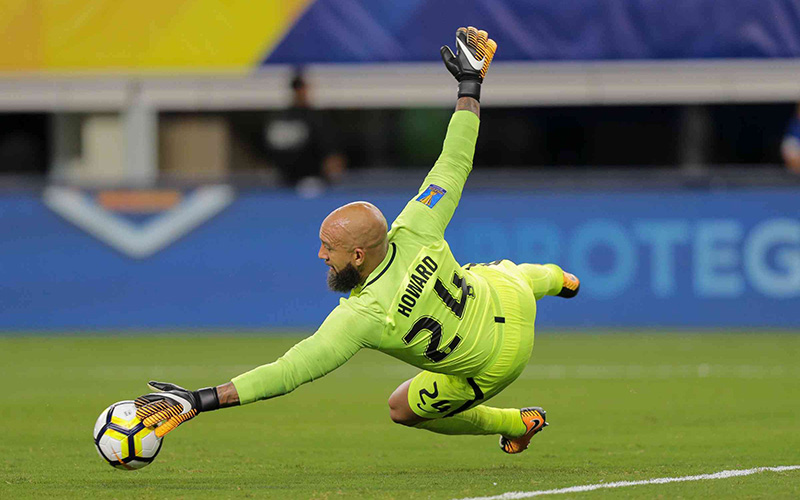 GOLD CUP HISTORY VS. JAMAICA
Since first meeting in 1988, the U.S. Men’s National Team holds an impressive 14-2-8 overall record in 24 matches against Jamaica, going 11-1-3 on U.S. soil and 3-1-0 in the CONCACAF Gold Cup. Those two blemishes of course came at the 2015 Gold Cup semifinal, when Jamaica upset the USA 2-1 to earn its first appearance in the tournament Final.

UTILIZING ROSTER DEPTH
Setting out to test his full roster at the tournament, Arena started 22 different players during the Group Stage. The U.S. head coach continued to utilize nearly his entire roster when he handed starts to additions Jozy Altidore, Michael Bradley, Clint Dempsey, Tim Howard and Darlington Nagbe in the Quarterfinal win against El Salvador.

In total, 27 of the 29 players who have been on the roster have started one of the USA’s four Gold Cup matches, with only Sean Johnson (Group Stage goalkeeper) and Jesse Gonzalez (Knockout Round addition) yet to appear in the tournament.

“I think one thing we’ve benefited from in the tournament was that we had been able to look at a lot of players and see how they fit in in the big picture, and if there’s anything I get out of the Gold Cup it’s going to be that,” Arena said.

HOW THEY GOT HERE
A quick look at the U.S. MNT’s road to the 2017 CONCACAF Gold Cup Final:

USA HISTORY IN THE GOLD CUP
The United States has won five editions of the tournament, beginning with the inaugural 1991 Gold Cup when the team defeated Mexico 2-0 in the Semifinal before downing Honduras on penalty kicks in the Championship. Current U.S. MNT head coach Bruce Arena is one of two managers to win the tournament twice, lead the side to its second and third titles in 2002 and 2005 respectively and the team followed those up with wins in 2007 and 2013. In 14 editions of the tournament has played in the Semifinal on 13 occasions and advanced to the Final 10 times. 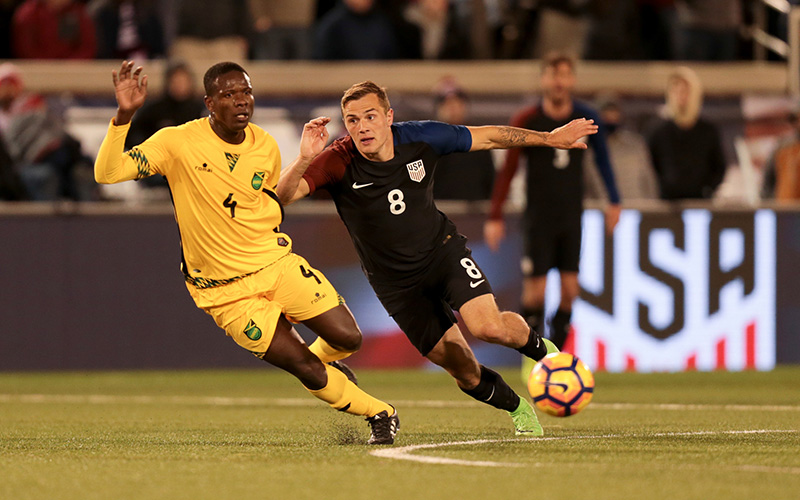 Jordan Morris scored the game-winner vs. Jamaica in a February friendly earlier this year.