How Do You Qualify for the World Cup?

Nations qualify for the World Cup by competing in their confederation’s qualification tournament. Each confederation is granted a certain number of qualifying spots, and each has its own tournament format. The USA competes as a part of CONCACAF (Confederation of North, Central American and Caribbean Association Football).

As has been the case since 2006, CONCACAF nations are allocated three and a half qualifying slots – three automatic berths and one qualification opportunity through the Intercontinental playoff against the fifth-place team from the AFC (Asian Football Confederation).

CONCACAF qualifying includes all 35 of the confederation’s members competing in five rounds of play. The top six nations, based on the FIFA World Rankings before the tournament start, enter in the Semifinal Round. The U.S., ranked third in the region, joined the competition beginning in November 2015.

Soaring Through the Semifinals

In the Semifinal Round, the top six-ranked teams and six winners from the third round of qualifying are drawn into three groups of four. Each team plays a round-robin home-and-away schedule against its groupmates, and the top two teams in each group advance to the Final Round, affectionately known as “the Hex”.

The U.S. was placed in Group C with Trinidad and Tobago, Guatemala and St. Vincent and the Grenadines. It was a dominant run through the Semifinal Round, as the red, white and blue lost just once while putting together a +17 goal differential to win the group. Jozy Altidore led the way with six goals, at least for a short time, becoming the MNT’s all-time leading goalscorer in World Cup Qualifying.

The Semifinal Round also gave rise of new key contributors for the MNT. Christian Pulisic became the youngest American player to score in a World Cup Qualifier when he recorded a pair of goals off the bench in the USA’s 6-0 win at St. Vincent and the Grenadines on Sept. 2, 2016. Paul Arriola joined a select number of players who have scored in their first two National Team appearances when he netted on Sept. 6, 2016 against Trinidad & Tobago in Jacksonville, Fla.

Players like Kellyn Acosta, Jordan Morris, Tim Ream, Bobby Wood and DeAndre Yedlin also made their World Cup Qualifying debuts during this round and have become important contributors for the MNT since.

Roaring Back After Rough Start

Winning its Semifinal Round group gave the USA one of six spots in CONCACAF’s brutal final qualifying round known as the Hex. Similar to the previous round, the six teams play a home-and-away round robin schedule against each other, with the top three teams booking a ticket to Russia while the fourth place team moves to the Intercontinental Playoff with the fifth-place team from Asia.

After losing its first two matches in disappointing fashion, the U.S. needed a spark. Enter the most successful coach in MNT history, Bruce Arena, who was brought in to guide the team through the trials of World Cup qualification. The USA responded with a bang, defeating Honduras 6-0 in San Jose, Calif. After missing months with an irregular heartbeat, Clint Dempsey announced his return to the National Team with a hat trick against Los Catrachos. Pulisic added his name to a Hex scoresheet for the first time with a goal and two assists in the match.

Against Panama on March 28, the U.S. earned its first road points of the round with a 1-1 draw.  Pulisic found Dempsey in the 39th minute to put the USA on the board, and a strong defensive second half from Tim Howard and the center back pairing of Tim Ream and Omar Gonzalez secured the point. The result elevated the U.S. to fourth place in the Hex standings, squarely back in the race for the World Cup after four matches.

Looking to continue its climb up the Hex standings, the MNT entered its June qualifiers on a roll. Pulisic continued his hot streak in Denver as the U.S. took on Trinidad & Tobago. After a scoreless first half, the 18-year-old finished off a nice combination to open up the scoring in the 52nd minute. He added again in the 62nd minute to score his fourth goal in four matches and give the U.S. a 2-0 victory.

Riding high, the U.S. faced one of its toughest tests of the Hex in a trip to Estadio Azteca to take on rival Mexico. El Tri had been historically dominant at the 87,000-seat stadium that sits at an air-gasping 7,200 feet of elevation, but the U.S. had reason to be optimistic after a series of recent positive results in the Mexican capital.

The most recent renewal of the rivalry got off to a soaring start when Michael Bradley stole the ball at midfield and launched a rocket of a shot from 40-yards out past Mexico goalkeeper Guillermo Ochoa in the sixth minute.

Mexico equalized in the 23rd, but the U.S. earned a valuable point in the 1-1 draw against its regional rivals.

In September, the U.S. fell 2-0 to Costa Rica in New Jersey, but pulled out a thrilling draw on the road against Honduras. Down 1-0 late, the USA got a lift from Bobby Wood when entered the match in the 73rd minute, looking to provide the much-needed jolt.

After a foul on Pulsiic earned the U.S. a free kick, Kellyn Acosta drove a swerving shot on goal. The Honduran ‘keeper got a hand on it, but Matt Besler and Jordan Morris kept the ball alive as it flirted with the end line. The bouncing ball found Wood in front of the net, where he knocked it in to score the equalizer in the 85th minute.

The 1-1 draw ensured that the MNT’s World Cup fate would be self-determined by its upcoming final two contests.

After nearly two years and 14 matches, the Hex is coming to a close. The U.S. has fought back from a rough start and sits fourth in the table with two games to go. With just a point separating third from fifth place in the group, the current standings reflect the tightest the Hex table has been between those three positions since this qualifying format was adopted for the 1998 FIFA World Cup. 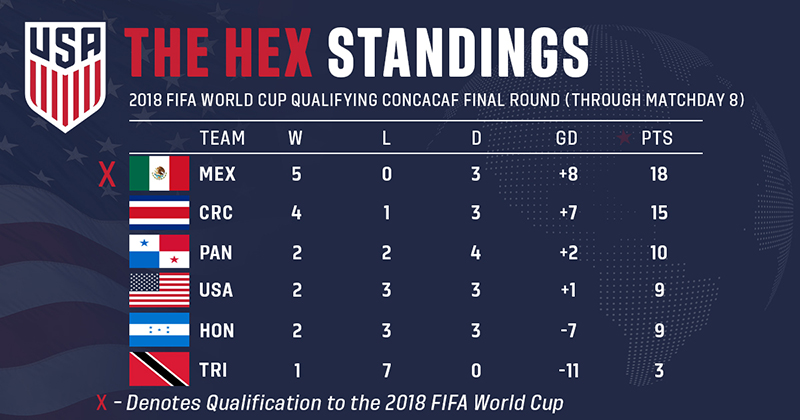 While Mexico has clinched a spot in the World Cup and Costa Rica has secured a top-four finish, the U.S., Panama and Honduras remain well in contention for the third and fourth spots.

With its last two matches against Panama and Trinidad & Tobago, the USA completely controls its own destiny. With two victories, the team can punch its ticket to Russia for next summer.

CONCACAF Final Round Qualifying – Matchdays 9 and 10 Schedule (All Times ET):