Brad Friedel: "I Enjoyed Every Minute"

Brad Friedel’s international career was launched in a low-profile location at King George V Park in St. John’s, Newfoundland in 1992. But Friedel considers that match, a 2-0 U.S. victory over Canada before a crowd of 3,500, a high point of a career that included 82 National Team caps, victories in the English League Cup and Turkish Cup, and an English Premier League record: 310 consecutive appearances.

“The first time you put on the shirt for the senior [National] Team, it was not a luxurious game, it was away from home against Canada,” Friedel recalled. “But I was still in college at the time and to get a senior cap was a special moment.” 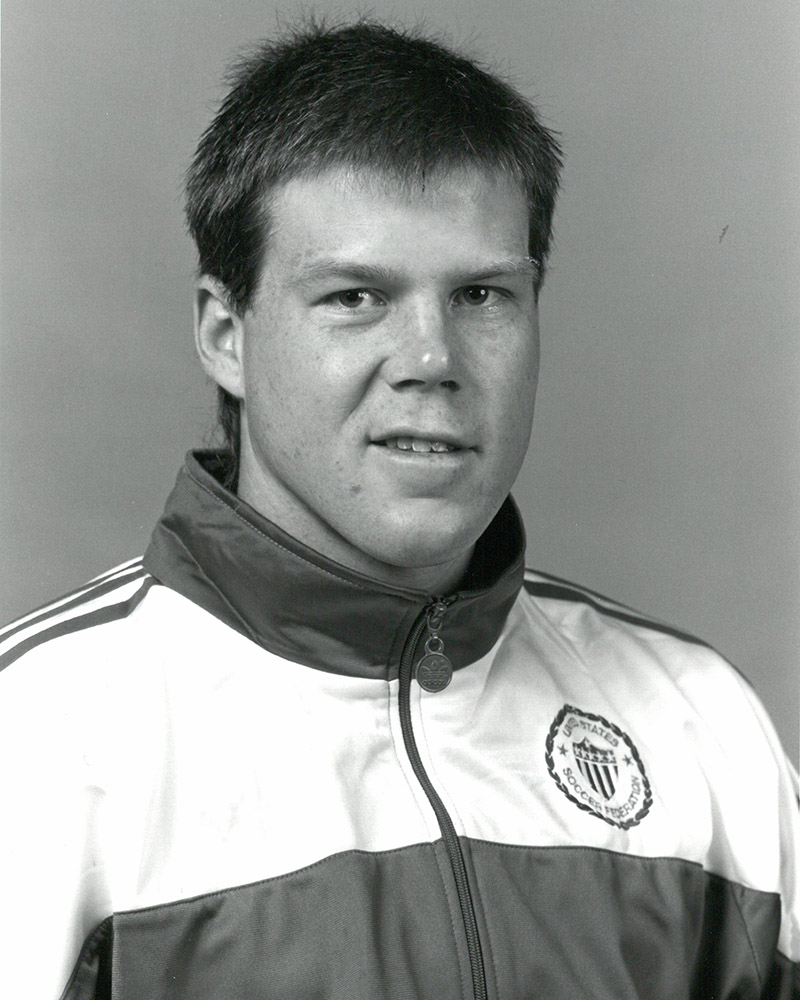 Friedel early in his MNT career.

For Friedel, a member of the 2018 National Soccer Hall of Fame induction class, that match was the first of 21 shutouts in goal for the U.S. Fittingly, Friedel concluded his international career with another clean sheet in a 1-0 victory over Poland at Kazimierza Gorskiego Stadion in Plock on March 31, 2004.

2002, the Highpoint
Then, there was the 2002 World Cup, the best U.S. finish since 1930, on the globe’s biggest stage. “The run we had in the 2002 World Cup,” Friedel said. “You look back and I think that was – I know there have been some fantastic players since then – but that was arguably the best U.S. squad that’s been assembled top to bottom. A lot of players played in Europe, big roles at their clubs at the time. Incredible competition for places. And I think being disappointed going out in the quarterfinals instead of just being happy reaching the quarterfinals says a lot about where soccer in the United States had come. That whole run was probably the most special moment in the U.S. shirt.”

Friedel saved penalty kicks against Korea Republic and Poland, then blanked Mexico 2-0 in the second round as the Americans advanced to a quarterfinal date with Germany (1-0 loss) in the 2002 World Cup, joint-hosted by Korea Republic and Japan. 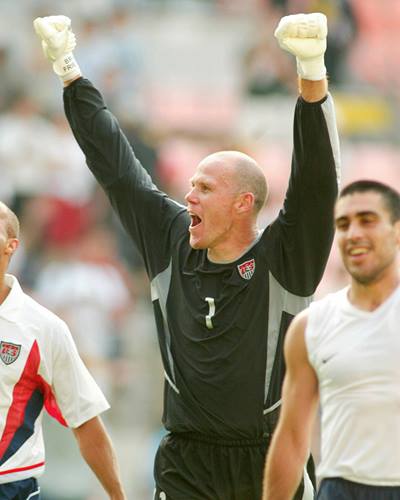 Friedel celebrates defeating arch rival Mexico 2-0 at the 2002 FIFA World Cup Round of 16.

Friedel’s first exposure to international soccer had been as a youngster, when he accompanied his father to a Charity Shield match between Liverpool and West Ham United at Wembley Stadium in 1980. But Friedel’s professional career aspirations did not begin to take shape until he was selected for the U.S. Olympic team while still a student-athlete at UCLA.

College Pathway to Stardom
“When I got out to UCLA, Sigi [Schmid] brought in a lot of talented players,” Friedel recalled. “College soccer was a lot different then. It was the place where all the best young players went, so the level was much higher back then than it is today. But he, along with a few of the other universities in the country, put on really good programs, and it was the first time I had been looked at by a National Team coach. It was Lothar Osiander with the Olympic team, and that was when we started traveling overseas and to South America. And after each game that you play and training sessions, and agents are coming up to you, and you start thinking this could be the career path. “I didn’t really think about it until then. I was just a Midwest kid in Cleveland playing every sport and soccer didn’t really have a much of a future to it back then. So, looking back on it, it was really fortunate stuff.”

Before making his debut with the full U.S. team, Friedel played in the 1992 Olympic Games (he also helped the team finish fourth in the 2000 Olympics) and later that year won the Hermann Trophy as the top collegiate player in the country.

Friedel combined athletic versatility – he played basketball, soccer and tennis in high school – with anticipation, a powerful presence and tactical savvy to attract offers from Europe. He had trials with Nottingham Forest, then coached by Brian Clough, and Liverpool before signing with Newcastle United in 1995. Friedel returned home to play for the Columbus Crew of Major League Soccer (MLS) in 1996 and ’97, then spent the next 18 years in Europe, where he played for seven clubs in three countries.

Meanwhile, Friedel was competing with Kasey Keller and Tony Meola for the starting goalkeeper position with the U.S. National Team. Friedel played in a 1-0 loss to Serbia in the final U.S. game of the 1998 FIFA World Cup, then became the undisputed starter in 2002. Friedel credited a healthy diet and yoga workouts to helping extend his career. In Friedel’s last season with Tottenham Hotspur, he weighed about 200 pounds, less than his playing weight at UCLA.

“I never started playing this sport for the personal accolade,” said Friedel, who currently coaches the New England Revolution of MLS. “It’s a team sport. But when you can be recognized by the country you were born in and represented, it truly is an honor and I accept it humbly. It’s not something that ever really crosses your mind when you’re playing, getting into a Hall of Fame. But it’s a very nice feeling when I found out, and the way I did find out was really good. Over the last few years I’ve become pretty close with Tab Ramos, and when he turned up [at New England Revolution practice] I had no idea. It was a nice touch. But it truly is an honor and I enjoyed every minute playing and representing the United States.”