There are 28 names on the MNT’s November roster for European matches against England and Italy. While 27 familiar faces will begin to gather on Sunday in London, one will be taking his first step with the senior team: Swedish-based midfielder Romain Gall.

Gall enters his first MNT camp in the midst of a strong season in the Allsvenskan, where the attacking midfielder began the campaign by racking up eight goals across 16 competitive matches for Sundsvall. Owing to those performances, the 23-year-old attracted midseason interest from one of Sweden’s biggest clubs, Malmö, where he transferred in mid-July.

Playing for a club involved in the UEFA Europa League, Gall has continued his production by scoring six goals in 11 league matches.

Path to the MNT

Born in Paris, France, Gall moved to the U.S. at age seven, settling with his family in Herndon, Va.  He played for D.C. United and Real Salt Lake in the U.S. Soccer Development Academy before returning with France to join the Lorient Academy in 2011.

During his stay at Lorient, Gall first became involved with the U.S. Youth National Teams, turning out for the
U-18 MNT in 2013. After three years in the Lorient system, he returned to the U.S. to join Columbus Crew SC the following year. 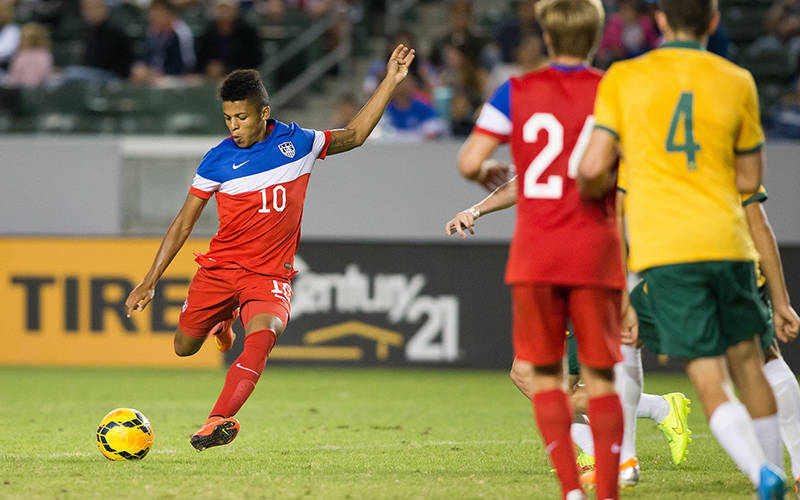 Back stateside, Gall received an extended run with the U-20 MNT. Most notably, he tied with current Mexico standout Hirving Lozano for the Golden Boot with five goals at the 2015 Concacaf U-20 Championship.

While he helped the team qualify for that summer’s U-20 World Cup in New Zealand, he missed out on the final roster. Gall set his sights on a European return, signing with Swedish third-division club Nyköpings in 2016. His play there caught the eye of Allsvenskan side Sundsvall in 2017, and after a season-and-a-half with the Giffarna he found his way to his current post at Malmö.

“Prior to his current run of form in Sweden, I’ve only known about Romain Gall through his experience with the U.S. youth teams,” MNT head coach Dave Sarachan told ussoccer.com. “He had been off the radar a little bit and sort of re-emerged this year with his strong play for Sundsvall which continued when he transferred midseason to one of Sweden’s top clubs, Malmö.

“When we talk about bringing along young guys and having the opportunity to see where they’re at, he has definitely put himself in the conversation with the minutes he’s getting and his consistent production this season. He is an intriguing player in the attacking third, and I think you can never have enough guys to look at that can pull of plays in that part of the field.”

Naturally right-footed, Gall has shown the capability of playing in attacking positions throughout midfield and grabbed headlines last week when he scored long-distance strikes in back-to-back wins against Örebro (4-0) and IFK Goteborg (3-0). See below:

Local @RomainGall scored for @Malmo_FF today as they defeated Örebro SK 4-0, Gall scored on a great left footed one timer from just outside the 18!#RepDMV pic.twitter.com/EOHlKU3yTG

Deserving of the call-up, Gall will now compete to make his senior team debut in the team’s final matches of 2018. Should he appear against either England or Italy, the 23-year-old will become the 20th player to debut for the MNT this year and 23rd under Dave Sarachan since last November.