Nominees Set for 2018 U.S. Soccer Male and Female Player of the Year Awards

Voting for the awards starts today and closes on Dec. 3, 2018 at 11:59 p.m. ET. The winners will be announced during the first week of December.

All five WNT nominees played significant roles for the Women’s National Team during a 2018 that saw the USA finish its 20-game schedule with an unbeaten 18-0-2 record. The five nominees were also impact players on the squad that qualified the USA for the 2019 FIFA Women’s World Cup in France. 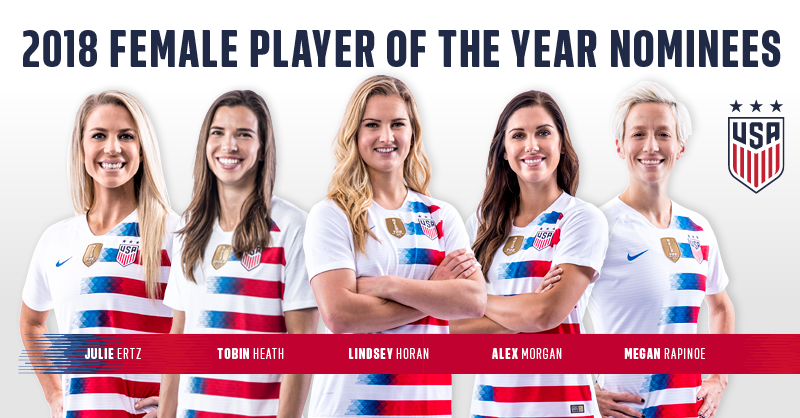 Morgan finished 2018 with 18 goals in 19 games while playing 1,500 minutes, the most of anyone on the team. Ertz once again was a vital cog in the midfield, playing more than 1,000 minutes for the third time in her career while scoring four goals. In her comeback year after sitting out most of 2017 due to injuries, Heath provided consistent danger in the attacking third, scoring seven goals in eight starts while adding six assists. Rapinoe led the USA in assists this year with 12, tying her previous high for most in a calendar year and her play on the flank was a big part of the USA’s consistent success. She scored seven goals and started all 16 games in which she played. The 24-year-old Horan had a stellar year for both club and country and won the NWSL Most Valuable Player award. She played in every game but one for the USA in 2018, tying Alex Morgan for most on the team.

As the MNT went through a transitional phase in 2018, all five MNT players are first-time nominees and used this year to take their first steps toward establishing themselves with the senior team. 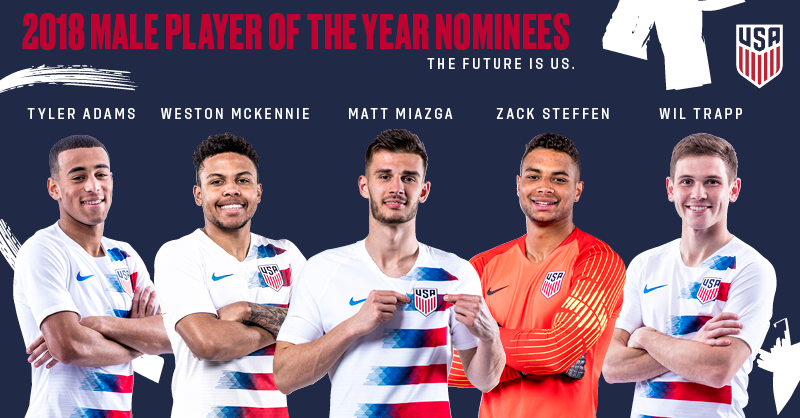 Adams tied for the team lead with eight appearances and scored his first international goal in the USA’s 1-0 victory against Mexico on Sept. 11. The 19-year-old also stayed consistent with the New York Red Bulls, registering seven assists in 27 appearances to help the club to the MLS Supporters Shield and their current run to the Eastern Conference Final. McKennie established his place in the USA midfield by making six appearances while also taking huge strides with German Bundesliga club Schalke, helping Die Knappen qualify for the UEFA Champions League last season before going on to score his first two goals during the current campaign. Miazga led all MNT center backs with seven appearances, while serving as a key figure in helping Dutch Eredivisie side Vitesse qualify for the UEFA Europa League. With six caps, Steffen tied the MNT record for most appearances by a goalkeeper in their debut year and made eight saves in a friendly against France before their successful run to the 2018 FIFA World Cup title. Steffen also earned MLS Goalkeeper of the Year honors after helping Columbus Crew SC back to the MLS Cup Playoffs. Captain of Columbus Crew SC, 25-year-old Wil Trapp’s veteran presence in midfield served a young MNT group well as he wore the captain’s armband for the U.S. as well in each of his team-leading eight appearances while earning Man of the Match against Paraguay and Peru.

Votes for U.S. Soccer Player of the Year awards are collected from respective National Team coaches, National Team players who have earned a cap in 2018, members of the U.S. Soccer Board of Directors, U.S. Soccer Athletes’ Council, National Women’s Soccer League head coaches for the WNT and American soccer league (MLS and USL) head coaches for the MNT, select media members and former players and administrators. In addition, select college coaches vote for the WNT award.

The U.S. Soccer Male Player of the Year has been awarded since 1984 when Rick Davis won it. Current U.S. MNT General Manager Earnie Stewart won it in 2001. Landon Donovan holds the record for most awards, winning it four times, while Clint Dempsey won it on three occasions. Then eighteen-year-old Christian Pulisic became the youngest player to win the award in 2017.