This is the second U.S. Soccer Female Player of the Year award for Morgan, who also took home the honor in 2012 when she finished the year with 28 goals and an Olympic gold medal.

After closing out 2017 on a goal scoring roll, Morgan continued her stellar form in 2018 and finished the year with 18 goals in 19 games while picking up three assists. Her 18 goals in 2018 were by far a team-leading mark and were also the second most she has scored in a calendar year in her WNT career, behind only 2012. She finished the year two shy of the century mark with 98 career goals.

In 2018, Morgan scored against nine different countries. She tallied in the first game of the year against Denmark and also scored against Mexico, China PR, Japan, Brazil, Trinidad & Tobago, Jamaica, Canada and Scotland. She had six multi-goal games, including a hat trick against Japan in the Tournament of Nations, and moved to third place all-time in U.S. history in multi-goal games, tied with Michelle Akers (26), and behind only Abby Wambach (45) and Mia Hamm (38).

Morgan won the Golden Boot as the top scorer at the Concacaf Women’s Championship, pounding in seven goals over the five matches, though she only played in four of those games. Her two goals in the semifinal win against Jamaica helped send the USA to the 2019 FIFA Women’s World Cup in France and she bagged a clinching goal in the 2-0 championship game win against Canada.

For the Orlando Pride in the NWSL, she played in 1,500 minutes over 19 games and had five goals with two assists.

“It was an incredible year for the U.S. Women’s National Team, going undefeated, and there were a lot of players that stepped up and played essential parts in leading this team,” said Morgan. “Of the five players nominated, any one was deserving, so I am incredibly honored to have won this award.”

“After having a club season with Orlando that I didn’t anticipate, I’m just happy that I was able to contribute in this way to the National Team, especially leading into a World Cup year, as it was important for the whole team to gain confidence and momentum,” added Morgan. “To be named captain with Megan and Carli, I felt I was challenged to succeed in a really positive way and was comfortable growing into this larger role with the team. I’m also pleased that I was able to improve and evolve in my play along the way. There’s a good energy to the team right now and we’re all really looking forward to getting started next year.” 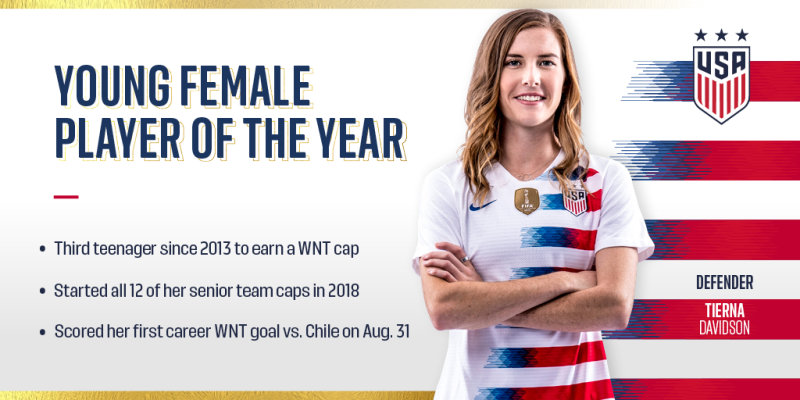 The 20-year-old Davidson, a junior at Stanford University, attended the U.S. WNT’s annual January training camp in Los Angeles, and then at age 19, earned her first senior team cap, starting and playing the full 90 minutes in the USA’s first match of the year, a 5-1 victory against Denmark in which she picked up the game-winning assist on a goal by Julie Ertz. She was the third teenager since 2013 to earn a first cap for the WNT. Mallory Pugh (17 in 2016) and Lindsey Horan (19 in 2013) are the most recent teenagers to debut for the senior squad.

Early in the year, she also played for the U.S. Under-20 Women’s National Team during the Concacaf Women’s U-20 Championship, helping the USA earn a berth to the U-20 World Cup.

As 2018 moved along, the skillful and remarkably poised left-footer firmly established herself with the senior team. She started all 12 games in which she played, mostly at center back but she also saw some action at left back and was on the field for 1,049 minutes.

Her second, third and fourth caps were serious tests that Davidson passed with flying colors as she played every minute of the 2018 SheBelieves Cup, against Germany, France and England. The 5-foot-10 Davidson scored her first career goal on Aug. 31 against Chile, powering home a header from a Tobin Heath corner kick.

Davidson, who helped lead Stanford to an NCAA title in 2017, was injured early during the college season, breaking her ankle after suffering a harsh tackle against the University of North Carolina and did not play again for the Cardinal. She missed the World Cup qualifying tournament and the USA’s trip to Europe in November due to the injury.

“It’s a huge honor, not only to be nominated, but to be chosen for this award. It’s been quite a year in terms of the quick start, getting to play for the National Team in some big games and then being included on the team for most of the year. And then, it came to a quick stop with the injury. OveralI though, this year was a great experience and I really enjoyed it. This award is of course a product of my teammates in college and with the National Team as they are always around you and they are the ones that make you look good. Also, I appreciate the belief that my coaches Paul, Hideki and Margueritte at Stanford, and Jill, Tony and Graeme with the National Team have had in me while giving me these opportunities to grow as a person and a player. I’m looking forward to putting this injury behind me and I can’t wait to get back on the field in January.”