Preview: U-17 MNT Takes Next Step Towards World Cup Berth in Round of 16 vs. Guadeloupe

TWO WINS AWAY FROM WORLD CUP QUALIFICATION: After opening the Concacaf U-17 Championship with three straight victories in Group F, the U.S. Under-17 Men’s National Team is two victories from a 2019 FIFA U-17 World Cup berth. The four semifinalists from the Concacaf Championship will punch their tickets to Brazil for this fall’s World Cup.

The USA finished as the top team in its group, setting up a Round of 16 fixture against tournament debutant Guadeloupe on Thursday, May 10 at 6 p.m. ET. The French overseas department reached the knockout stage as one of four group winners from the Concacaf Championship qualifying competition. 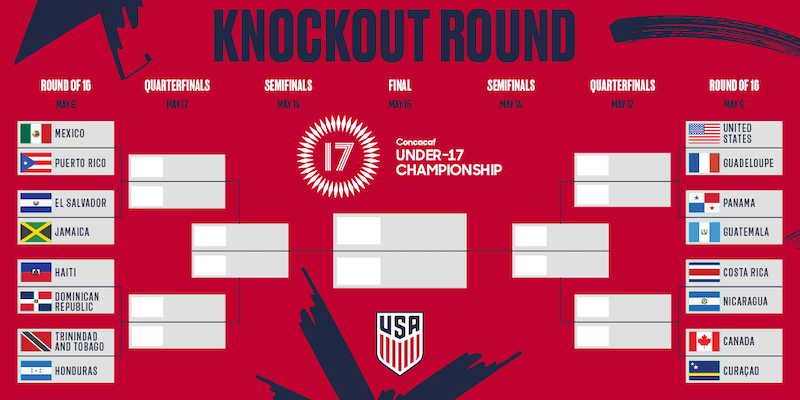 FLYING THROUGH GROUP F:  The USA collected all nine possible points in Group F, defeating Canada, Barbados and Guatemala to start the tournament on a three-match win streak. The U-17 MNT is currently riding an eight-game unbeaten streak dating back to last October and is undefeated in its last 10 matches at the Concacaf U-17 Championship.

The USA roared back from a 2-0 deficit with three unanswered, second half goals for a 3-2 win in its tournament opener against Canada and put together an authoritative performance in a 6-1 victory over Barbados in its second game. Facing a physical Guatemala side in its final group match, Griffin Yow wreaked havoc on the right wing en route to tallying two goals, and Alfonso Ocampo-Chavez iced the game with a late clinical header for a 3-0 victory. Both forwards benefitted from well-placed crosses sent into the box by Gio Reyna and Daniel Leyva, respectively.

The U-17s have been dangerous on set plays, scoring seven goals either directly from or through free kicks and corners in its first three games. Ocampo-Chavez netted his cycle-leading seventh goal against Guatemala, while Yow has found the back of the net five times in nine games for the U-17s.

GUADELOUPE SHINES IN PRE-QUALIFYING: Guadeloupe earned its place in the Concacaf U-17 Championship knockout stage with a dominant showing in qualifying. It kicked off its five-team group slate by rolling eventual runner-up Bonaire 7-0 before racking up three more wins over Saint Martin (1-0), Bahamas (5-1) and Aruba (2-0).

Les Gwada Boys put up a plus-14 goal differential in qualifying as nine players found the back of the net, led by midfielder Louis-Alexander Merabli and forward Kenny Mixitur with three goals apiece.

Guadeloupe is an overseas department of France and is a member of Concacaf, but not FIFA. It can participate in regional competitions such as the Concacaf U-17 Championship but is ineligible for the FIFA U-17 World Cup. Therefore, should Guadeloupe reach the semifinals of the tournament, the next highest-ranked FIFA-affiliated team would qualify for the World Cup.

ABOUT GUADELOUPE: As an overseas department of France, Guadeloupe is a non-contiguous part of France in the same way that Hawaii and Alaska are part of the United States. Guadeloupeans are French citizens, the island uses the Euro and its citizens are represented in the French National Assembly and Senate. Part of the Leeward Islands and the French Antilles, nearly 400,000 people live on Guadeloupe’s six islands.

The Guadeloupe senior team has had success in Concacaf competition, qualifying for three straight Gold Cups from 2007-2011 and reaching the semifinal in 2007. The U.S. Men’s National Team faced Guadeloupe in the 2011 Gold Cup, a 1-0 victory for the USA in Kansas City, Kansas.