Trusted with the armband by new coach Bruce Arena, Teal Bunbury is inspiring the New England Revolution to a revival in the 2019 Open Cup.
Jonah FontelaJune 18 2019
Open Cup

The New England Revolution’s Teal Bunbury is a man who’s sharp about the game –most other things too. The 29-year-old Canada-born striker sees all the angles and considers them with care. That being said, he had no angle – none to speak of – when he chipped an extravagant winner seven minutes from time to lift his side over the New York Red Bulls and into the Round of 16 of the 2019 Lamar Hunt U.S. Open Cup. 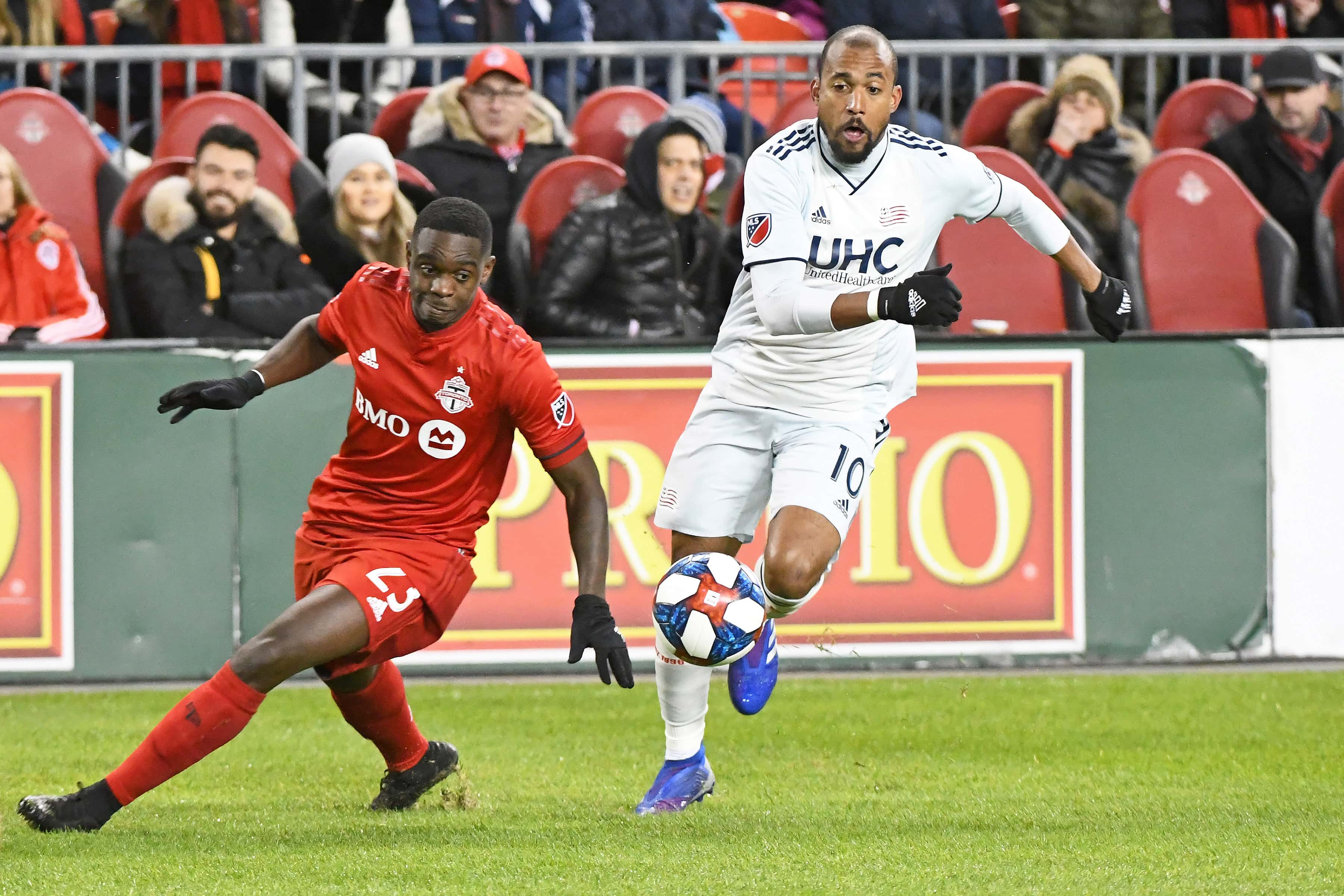 “I noticed him [NYRB goalkeeper Ryan Meara] coming off his line earlier in the game – a little farther than normal – so I made a note of it,” Bunbury told ussoccer.com about his outrageous effort down a man and deep into extra-time. “At that point in the game, I was tired and it just kind of clicked in. It felt like a good moment to try something.”

A Chance to Create Something

It’s a humble analysis of a heroic goal. It wasn’t just that the angle was close to impossible – or the distance (he was way out) or the fact that there were two defenders in Bunbury’s face. The circumstances were heavy. The Revs were down a man for a long stretch of a fiery game. They were on the road in New Jersey against a big local rival and they were only seven minutes from forcing a penalty shootout. Most pros, after winning the ball near midfield like he did, would have taken it to the corner flag. “I thought about it,” Bunbury said with a small laugh. “But I thought, maybe here’s a chance to create something against the run of play and avoid the coin-flip of a penalty shootout. It turned out to be a good decision and a pretty good shot. I was fortunate it went in.”

Nobody to pass to because you're down a man in stoppage time 🤔 why not just chip it in! 😆 @NERevolution 3-2 @NewYorkRedBulls #USOC2019
📺 the rest of OT on ESPN+ https://t.co/O77n66kxaw pic.twitter.com/8xZKNeuaZE

It was a bold move. A considered one. The execution was perfection. Anyone can take a chance late in a Cup game, but it takes something special to pull off what Bunbury did. Teammates rushed to celebrate their captain’s magic, and newly arrived Revolution coach Bruce Arena looked at the touchline with a small smile on his face.

“He’s [Bunbury] is a very good player, but he’s a great individual,” said Arena, who arrived in Foxboro last month to take over a club – a founding member of MLS – in terminal decline for too many seasons running. “When you get to a team in the situation that we’re in, you need people with character and Teal is that kind of person.” 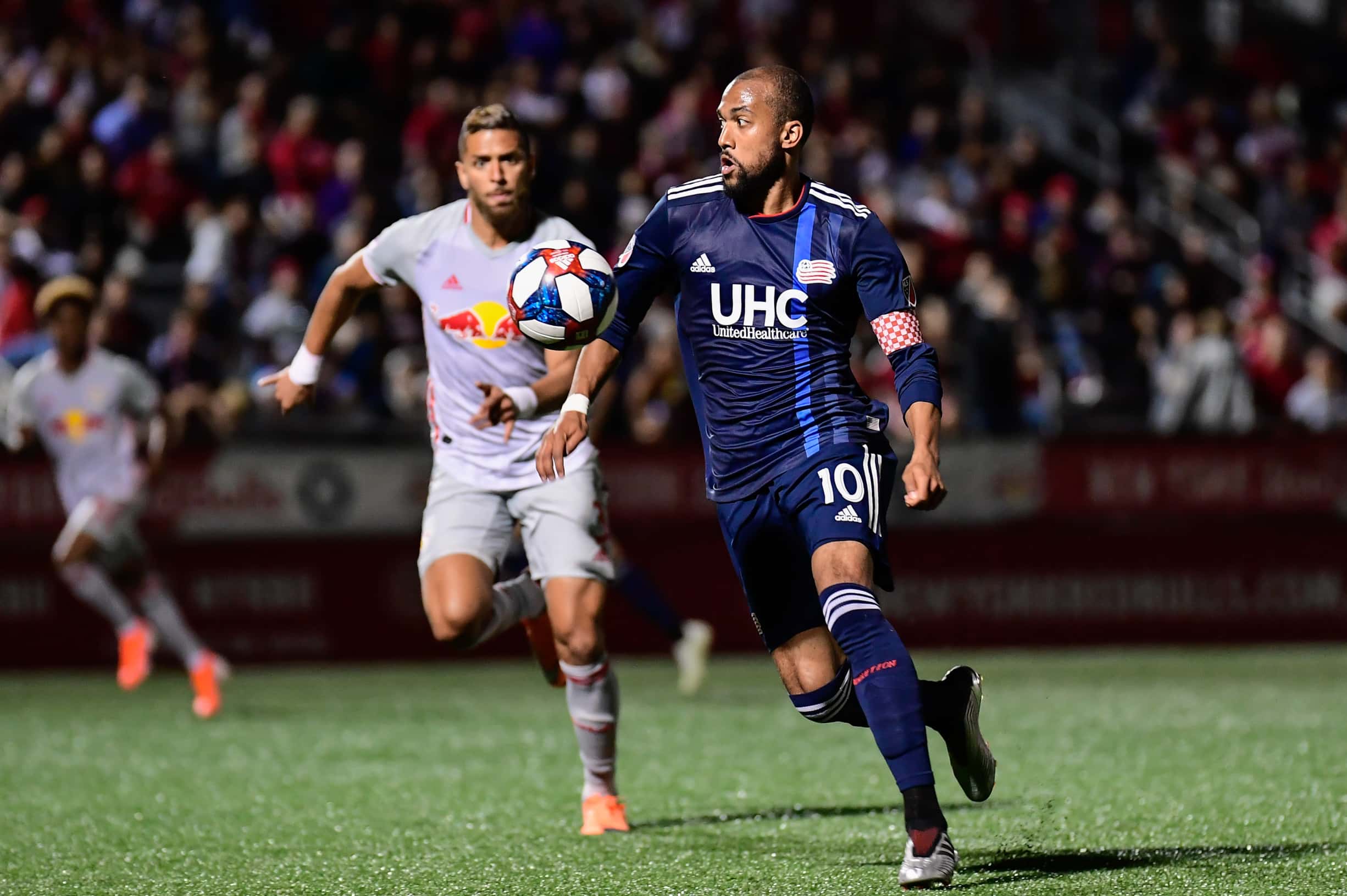 And for the Revs – mired and self-doubt and looking to climb out – the Open Cup is an opportunity. The 106-year-old tournament is one for the muck and the grind. For an MLS team, it’s five games to a trophy. But they’re a hard five games. They don’t come easy. “In the Cup, there’s no tomorrow so you need to go for it for real,” said Bunbury, team leader for the Revolution whose only major trophy is a 2007 U.S. Open Cup. “You have to try to win or grind it out for penalties. It’s always tough and the games get chippy. You’ll probably get a weather delay somewhere – that always happens. The key is being locked in because in the Cup anything can happen.”

From Coach to Captain

It’s a message that comes straight from Arena to the field – filtered by a captain who’s a lead-by-example type and a positive influence on the players around him. “Bruce reminds you before the game that you’re likely going to have to go more than 90 minutes – it may not seem like much but it’s important to consider at the start of a game,” said Bunbury. “The subs know they need to be dialed in because we’ll use all of them in these Cup games. It’s a knockout tournament, so he lets us know we need to lay it on the line because we want to get to the Final. That’s our goal and I think we can do it.” 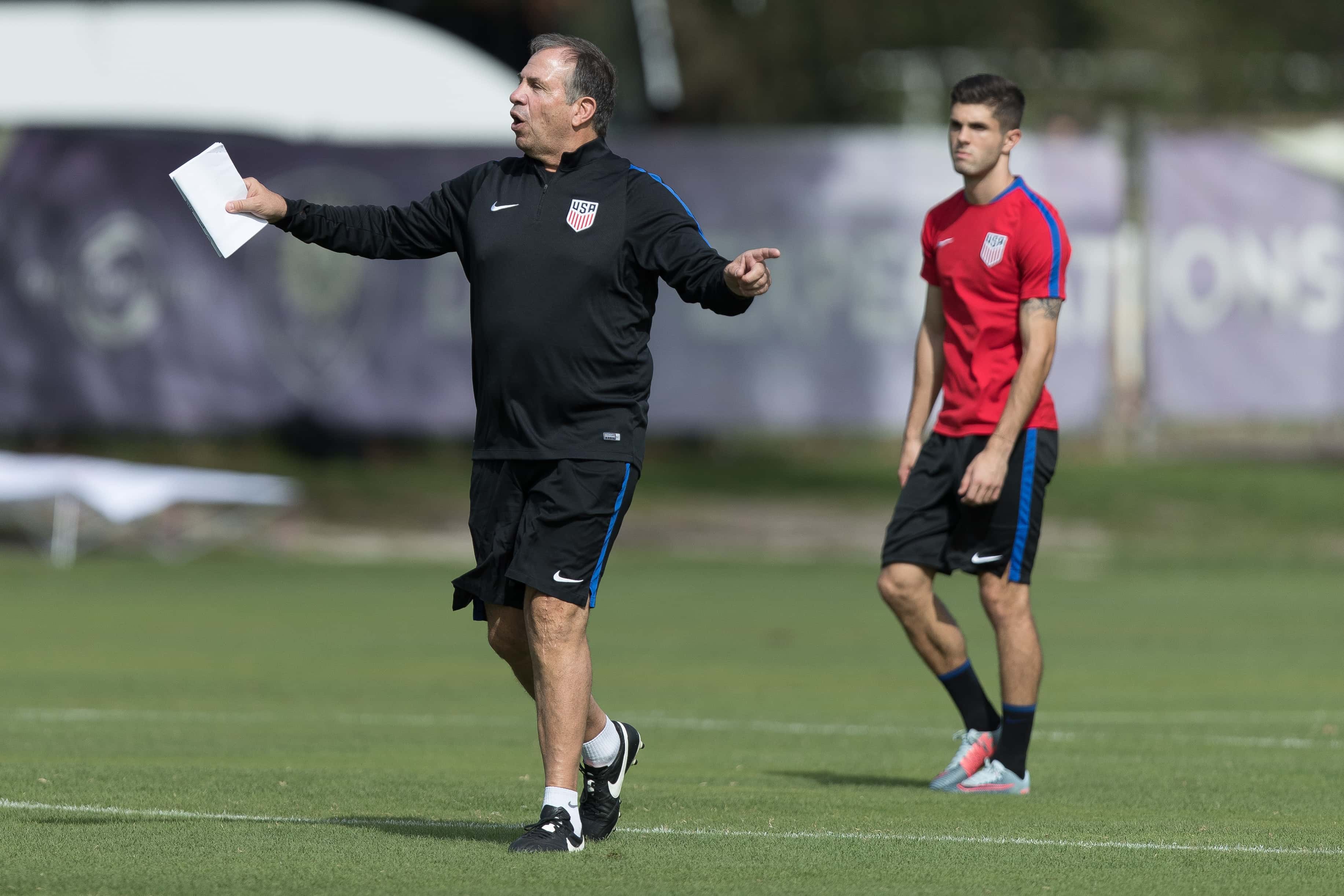 Bunbury is one of few in Revs’ Blue who knows what it takes to win the Open Cup. He was on the frozen turf of Sporting Park in 2012 when his then-Sporting Kansas City beat Seattle Sounders in a shootout to lift the trophy for a second time (it’s four now). “Oh, that day, was incredible,” he remembered. “It was only our second year in the new stadium and the fans was amazing. We were emerging and changing as a club. We hadn’t won a title in a long time and the fans were hungry. We were up against Seattle, who were known for winning Open Cups, and the game was incredible. Jimmy – the White Puma – Nielsen was saving everything, and I just remember running together with my teammates at the end after the last penalty. That really stayed with me.”

It’s no wonder Arena handed Bunbury the armband in the 2019 Open Cup. Born in Canada, but a U.S. international with four senior caps, he was raised “in awe of the game” watching his dad become a hero scoring goals in Portugal for Maritimo on the archipelago of Madeira. The armband isn’t extra responsibility for Bunbury. It’s “an honor.” It’s something he’s “grateful for.”

Now, just like in 2012, Bunbury has the chance to help a club turn a corner in a tournament that likes an underdog and respects a hard worker with the skill and guts to take a chance near the end when hope and luck look to have left the building.

It's the old "I'm just gonna chip this between 2️⃣ defenders and over the keeper" shot to win the game trick! 😎#NERevs pic.twitter.com/ciwrUqbVh7

“It’s a chance to win a trophy,” Bunbury, a decade-long veteran of MLS, said of the Open Cup. “It’s hardware right there for you. Obviously our season wasn’t going great, but we’ve been able to turn it around some in the last month or so [the Revs are undefeated in five games and off the foot of the table] and anything can happen in the Open Cup. You don’t always know what you’re opponents are going to look like. You might play on a field in bad shape. But, it’s a chance to win something – an opportunity.”

Bunbury sees the positives ahead of a Round of 16 game against Orlando City on the road in the sticky muck of Florida (Wednesday, June 19; 7:30 p.m. ET on ESPN+). He’s thinking like a leader and helping a team grow beyond its limits. “We have potential,” he said, a hint of something like hope in his voice. “We’re starting to gel as a team. Sticking together as a group is the most important thing. It’s easy to get up when you win, but the real character comes out when things don’t go your way. You need to keep moving forward.”

That’s exactly what Bunbury did to twist the knife in the Red Bulls. A man down and dog-tired on the road, he kept moving forward. Arena, and all those New England fans in need of a long-coming lift hope there’s more of that to come. “I think we can get it done in Orlando,” the captain said. “The Cup’s a fun opportunity to do a special thing.”