Saint Louis FC are one of two remaining second-division teams in the 2019 Open Cup – and they’re eager to keep shocking the big boys after beating Chicago Fire in the Fourth Round.
Jonah FontelaJune 18 2019
Open Cup

Saint Louis FC are the perfect Open Cup underdog. Blue-collar, Check. Humble, You got it. Smack in the middle of a hotbed of American soccer, For sure. Willing and able to go toe-to-toe with the big boys, Done it. Big chip on their shoulder, Got that right.

“The last thing we wanted was to bunker in and hold on for dear life for 90 or 120 minutes,” said team captain and Saint Louis native Sam Fink after a Fourth Round upset of four-time Lamar Hunt U.S. Open Cup winners and 2018 Semifinalists Chicago Fire. “We wanted to impose ourselves from the outset – to go toe-to-toe with them. It worked for us.” 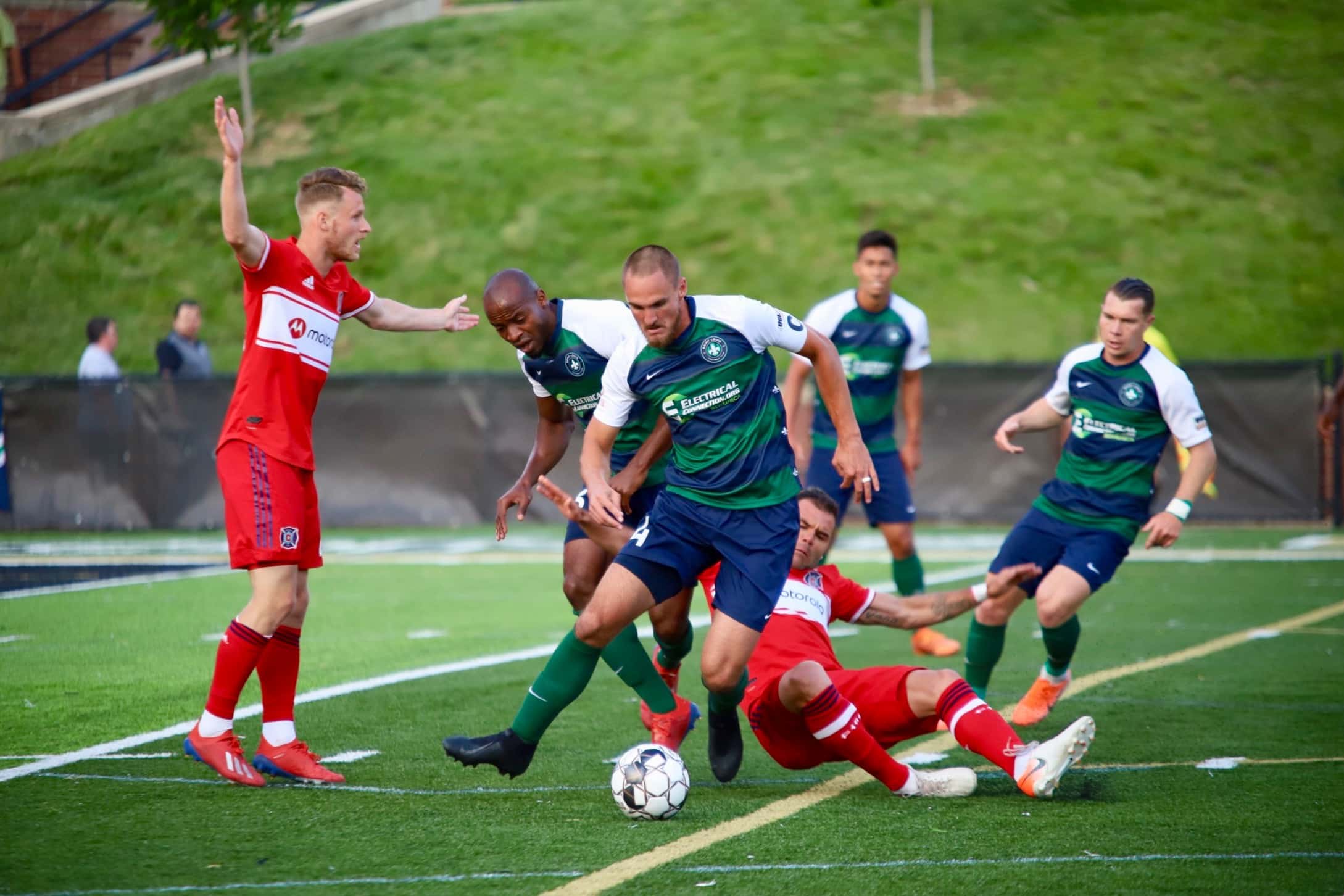 Saint Louis action against Chicago Fire in the Open Cup

Saint Louis survived an early onslaught that required a triple-save from goalkeeper Tomas Gomez inside three minutes last week at Lindenwood University – a multi-use field that was a crosshatch of soccer, gridiron and lacrosse lines that even had the home team scratching their heads. “You just put it out your mind and play,” said Fink of the historic win on an unusual pitch. “But when we watched tape of the game the next day, it was really crazy. There was every kind of line you could imagine.”

After the early scare, it was all Saint Louis. They opened the scoring with a thundering header from Austin Martz midway through the first half and added a second through Guy Abend just five minutes later. Chicago Fire, never able to find a proper rhythm, snatched one back from the spot late in the second half. “Frankly I think their penalty was a little soft,” said coach Anthony Pulis – son of well-known English boss Tony – who’s had more than his share of FA Cup scrapes in a decade-long playing career in England’s lower leagues. “We could have won 3-1 and probably should have.” 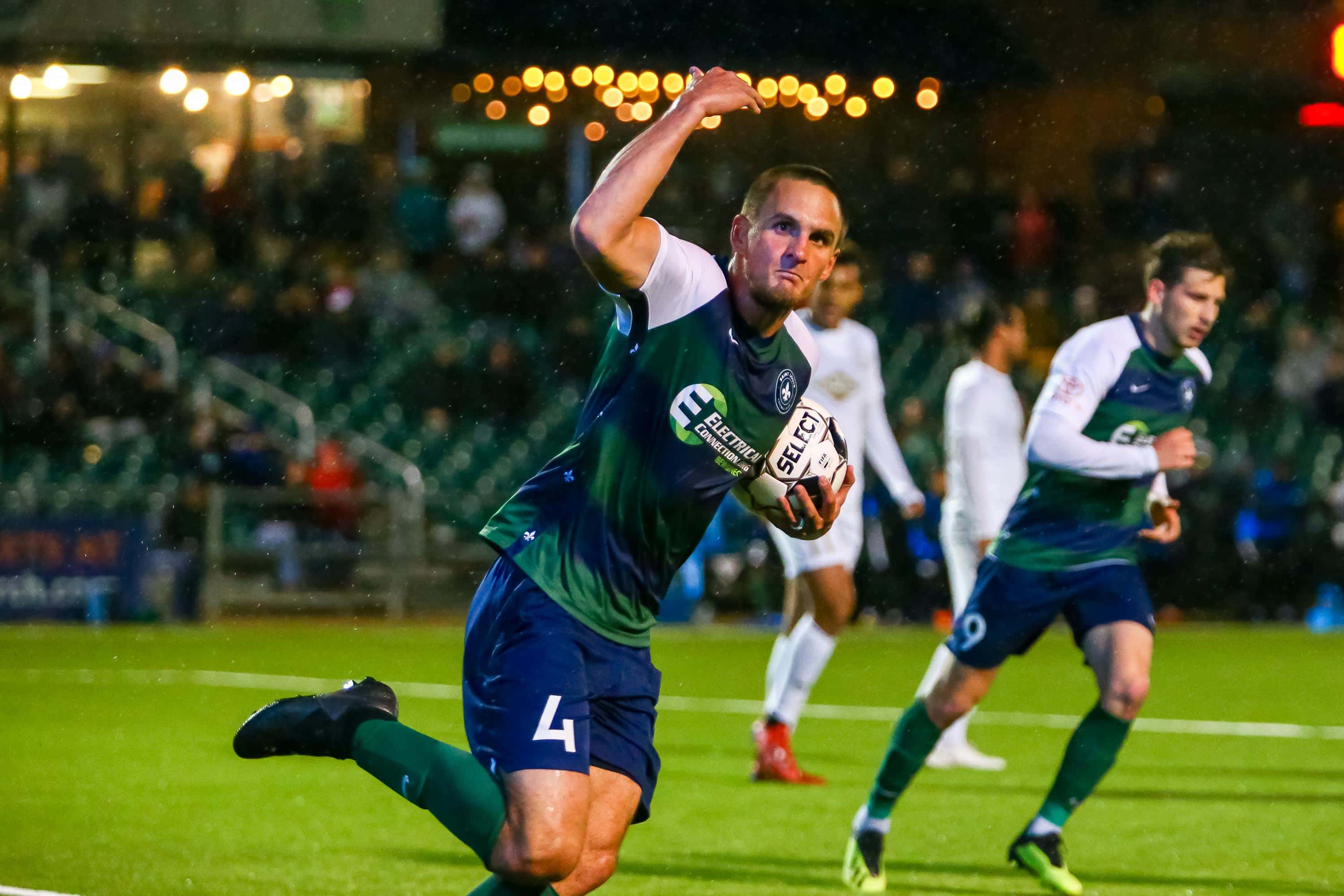 There’s a perfect mixture of brash and tough and humble in this Saint Louis side – a rugged commitment to playing the game for each other. An all-for-one-and-one-for-all ethos trickles from the manager to the captain and out to every player on the pitch.

“What makes this team something special is our commitment to each other,” said the 26-year-old Fink, a no-nonsense center-back who returned to the club for a fourth season after a year away at OKC Energy. “We’re really a tight-knit group and even though I think it’s a word that’s used way too loosely these days – it feels like family. It’s truly the case at this club. We go into battle together and we suffer together and the character of this group just pushes through the toughest stuff.”

From Fink at the back and Abend in middle, all the way up to Russell Cicerone up top, Saint Louis FC are a team of fighters, workers and scrappers. They can all play. Make no mistake about it. But the collective – a firm devotion to the cause – comes first. “Open Cup games are always intense. One team’s always got something to prove and for that team every game and every game after that in the Cup is going to be the biggest game of the year. In this case, it’s us. We’ll just keep coming at you no matter what. We’re going to push and push because there’s no tomorrow unless we win. We’ve got something to prove and we want to show we can play with the teams at the level above us.”

Fink embodies the never-say-die spirit of Saint Louis FC – and it’s no coincidence he’s the team’s skipper. It’s no coincidence that there are guys with his level of commitment in every position – and up and down the length of the subs bench too. Coach Pulis made sure of it. This team’s blood and thunder approach – their iron will – is no accident. 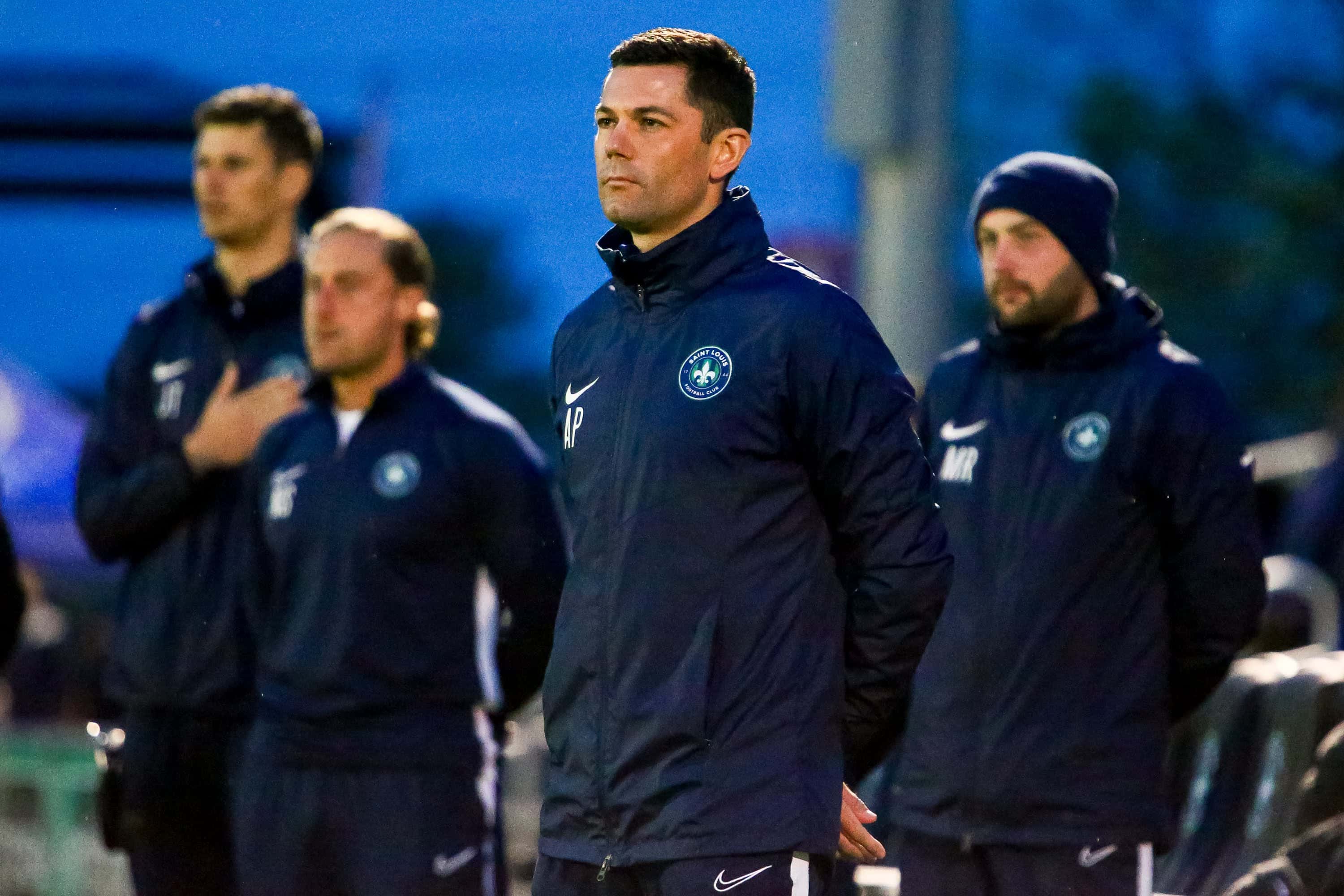 Coach Pulis has built a team of fighters and workers

“It was a huge emphasis when we recruited in the off-season – to get the right kind of guys in the team,” said Pulis, who sees his side in ninth place in the USL Championship after a weekend loss away at Bethlehem Steel. “I wanted good people with good character – team-first guys and guys with a we-not-me mentality. There’s a reason these guys are playing here. They have the right frame of mind. They mold well into a team and everyone’s fighting for everyone and doing things for the greater good.”

Up next for Saint Louis in this historic Round of 16 (a first for the second-division club founded in 2014) is FC Cincinnati – a first-year MLS team currently mired in last place in the top flight. A sell-out crowd is expected at SLFC’s Worldwide Technology Soccer Park, which is no longer suffering from the flooding that caused a last-minute venue change to Lindenwood for the Fourth Round game.  “We don’t look at where they are in their league – we just have a next-one-up mentality,” said Fink. “Maybe they haven’t measured up in MLS in their first year, but look at Houston Dynamo last year. They didn’t do well in the league and they won the Open Cup.”

“It’s a great achievement what the boys have done so far,” added Pulis, who looks with pride back on scrappy Cup wins over Des Moines Menace via PKs, USL League One side Forward Madison and then the big boys from Chicago. “But we have to do it again. It’s no use doing it once if we’re not going to keep at it. Cincinnati will know what we’re capable of, so they won’t be taking us lightly. But, I think we’re capable of doing this.” 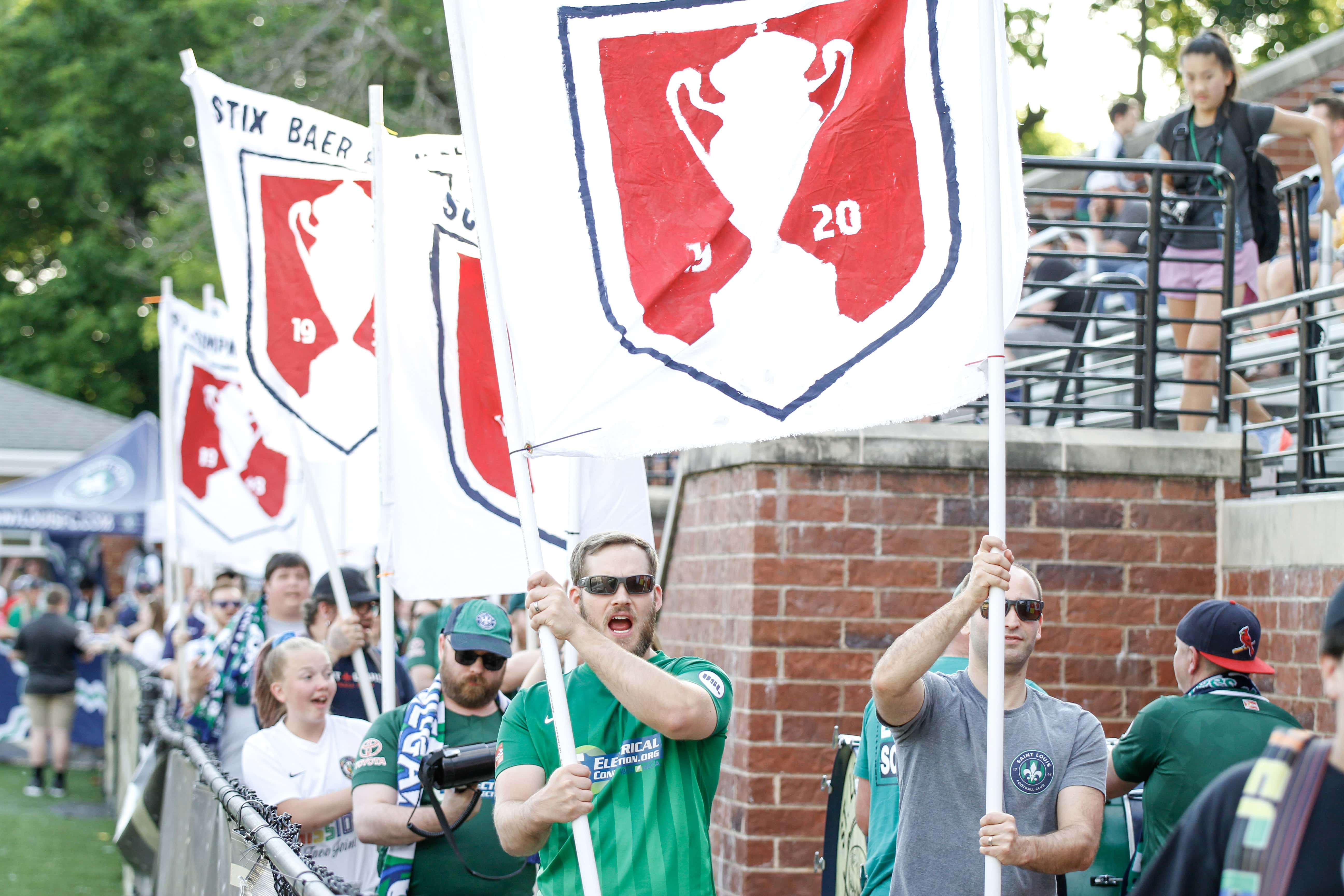 Ask anyone in the Saint Louis FC locker room and you’ll get the same response. They’re up for this. They know what’s at stake here in this town where old clubs like Kutis, Stix Baer & Fuller, Simpkins-Ford, the legendary Ben Millers and Scullin Steel had their names engraved on the old Dewar Cup. The old ghosts of Frank Pee Wee Wallace and Charley Colombo, Gino Pariani and Frank Borghi will be cheering them on from wherever old Cup winners go when they die. The whole heart and soul and underdog spirit of the tournament will align behind them.

It’s no guarantee, but it sure is something. Saint Louis FC will have thousands of their own fans cheering them on as they try to carve out a little more history for their club and their soccer-crazy city. The most hardcore fans – the ride-or-die Saint Louligans – unfurl banners at every Open Cup game with the names of the city’s past winners splashed across them. Those old ghosts – like Walter Bahr and Harry Keough – will be there in the front row, waving in the wind. You know who they’re rooting for. 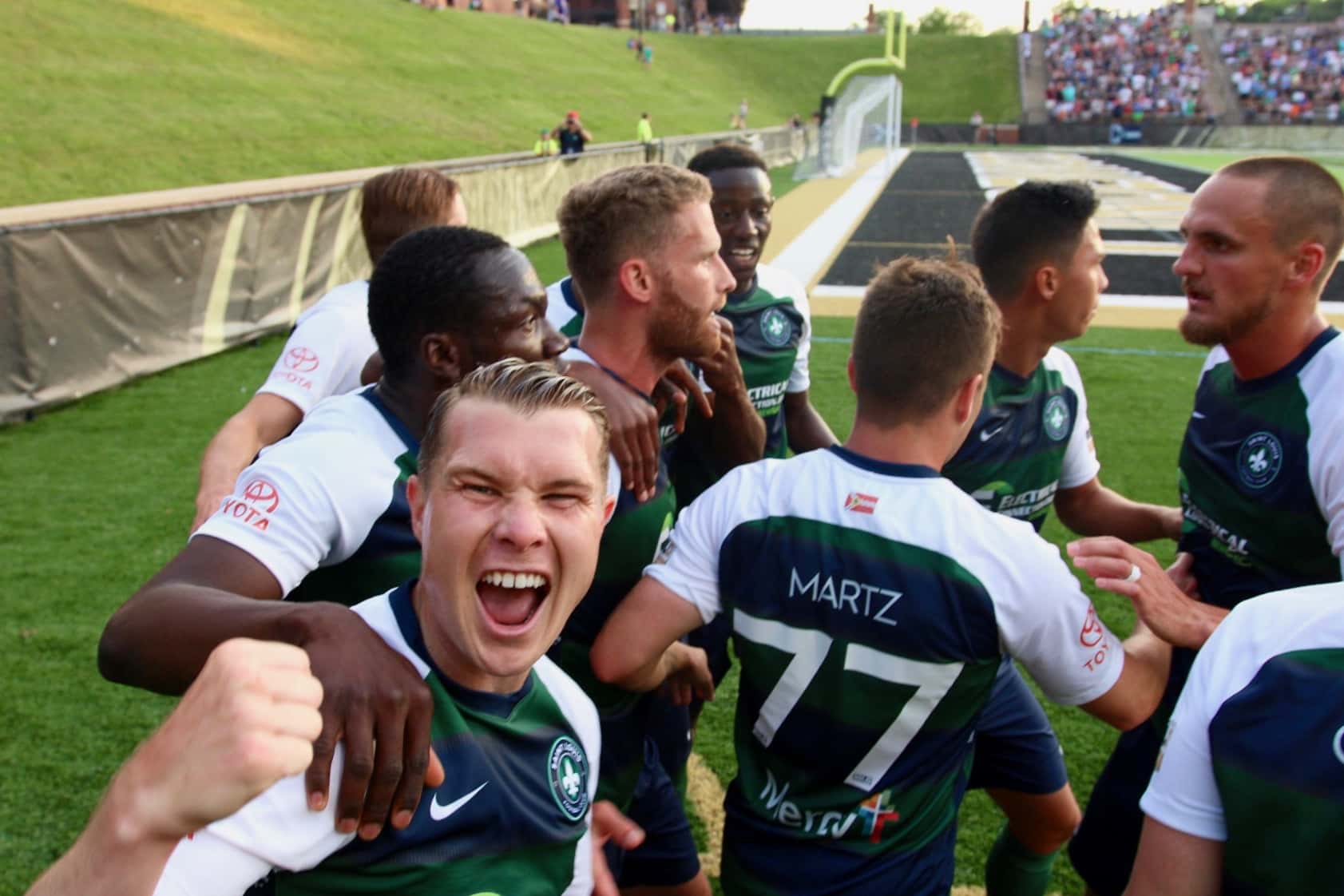 And out on the field, SLFC will have a squad ready to fight, to claw and to bleed for the cause. It’s a hard thing not to get behind. “It’s a huge honor to be here captaining my hometown club and to lead a group of guys – the best guys I know – into battle,” said Fink, his voice quiet and solemn. “These guys surprise me and push me every single day. I’m so grateful to be able to lead them out. And those fans, when you’re dog-tired and deep in OT, they help you keep pushing. They give you that extra pride.”