Tesho Akindele was an Open Cup winner with FC Dallas in 2016 and now he’s aiming for more of the same with Orlando City after scoring the goal that put the Floridians one win away from the club’s first ever berth in the Semis.
Frank Dell'ApaJuly 8 2019
Open Cup

Orlando City SC striker Tesho Akindele knows the importance of playing at home in the Lamar Hunt U.S. Open Cup. And the big striker is hoping the Lions’ supporters will provide a boost when OCSC meets New York City FC in the Quarterfinal Round at Exploria Stadium on Wednesday, July 10 [ESPN+].

“Home field in MLS is an advantage and in the Open Cup it is big,” Akindele said. “There’s something about playing on the road – unfamiliar territory, the fans against you – it’s hard. We’re looking forward to the game and having this crowd behind us.” 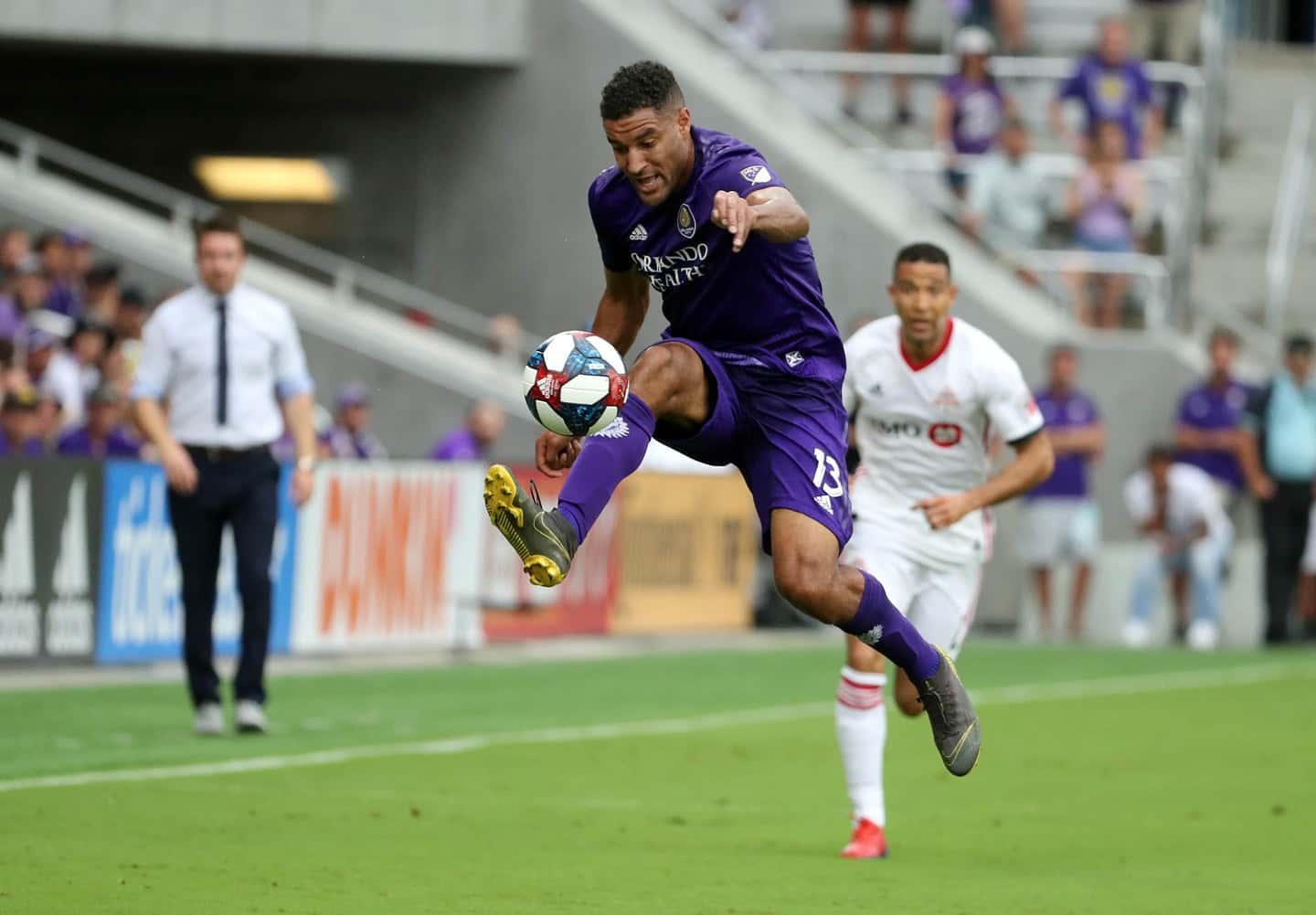 Akindele – an all-action striker – in action for Orlando City

Akindele won the 2016 Open Cup with FC Dallas and is now competing in the 106-year-old tournament’s Quarterfinals for the fourth time in six years. Remarkably, Akindele’s teams have compiled an 11W-2L-1D record in the event. This year, he and OCSC opened with a 3-1 victory at USL Championship outfit Memphis 901, then took a dramatic 2-1 extra time home win over the New England Revolution in the Round of 16. Akindele scored what turned out to be that game’s decider, a close-range poke that deflected past Matt Turner, to send Orlando City to only their second appearance in a Quarterfinal.

Better Than the Revs

“I thought we played better than they did, to be honest,” Akindele said of the Revolution game. “We had the better chances before we ended up scoring. I got the game-winning goal. I got kind of lucky, but they say you miss 100 percent of the shots you don’t take.”

After Akindele’s goal, OCSC creator Sacha Kljestan and Revolution coach Bruce Arena appeared to engage in a verbal dispute. “I don’t know how much they got into it,” Akindele said. “I think it was a little misunderstanding. I rolled my ankle a bit and everyone was unsure if was I hurt or not. So they were talking but I don’t think it was anything serious. But it shows this tournament means something. Sacha and Bruce Arena are huge names and for them to get fired up over a game shows how important the tournament is.”

Akindele received early lessons in the significance of the Open Cup while playing for FC Dallas. “It’s the Lamar Hunt U.S. Open Cup,” Akindele said, referring to the late father of FC Dallas investors Clark and Dan Hunt. “And that makes it an even bigger tournament for the owners. Also, winning it with the club that was invested in it, the owners were celebrating with us every step of the way. They got us all rings and they made sure we knew how much it meant.”

In Akindele’s first season with the Hoops, they were eliminated at home by the Philadelphia Union via a penalty shootout (Akindele converted his attempt) in the Semifinals in 2014. Two years later, Akindele and FC Dallas took away victories over the Houston Dynamo in the Quarters and LA Galaxy in the last four before capturing the 2016 Open Cup title with a 4-2 home victory over the Revolution. 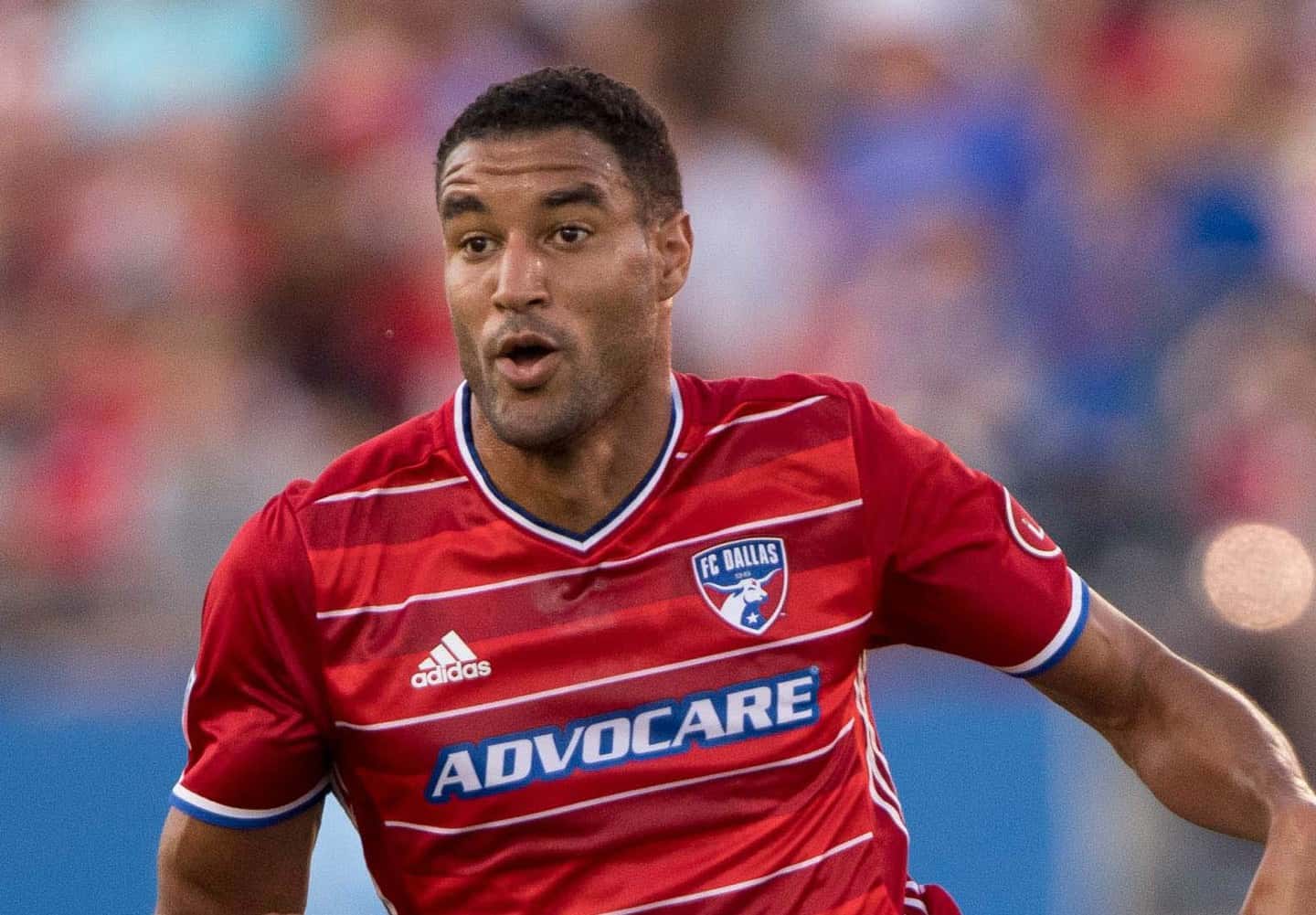 Akindele won an U.S. Open Cup with FC Dallas in 2016
“We went down early but we came back pretty quickly and Maxi Urruti got a couple goals,” Akindele recalled of the Final. “Even when we went down there wasn’t a sense of panic. We were a really good team at home, and we got to celebrate there with our fans and in the locker room. It’s something I won’t forget.

A Cup & Missed Chances in Dallas

“But it was bittersweet. We won the Open Cup and Supporters Shield but we didn’t come close to doing what we could have [in the MLS playoffs],” Akindele, who plays for Canada’s National Team having been born in Calgary before moving with his family to the States when he was eight. “We lost Mauro Diaz, and he was a really crucial player to our team. We had the squad to make a better run. But we did win the Open Cup and Supporters Shield and if you tell any team at the beginning of the season they were going to win those they would take that.”
FC Dallas were eliminated on the road by Sporting Kansas City in the Quarterfinals in 2017 and in the Round of 16 last year. Akindele was dealt to Orlando City for allocation money this year and he scored in his Lions’ debut, a match that turned out to be a preview of the upcoming Open Cup Quarterfinal. Akindele’s 75th-minute equalizer gave OCSC a 2-2 draw with NYCFC at Exploria Stadium. The next meeting between the teams resulted in 1-1 draw, as Portuguese star Nani gave Orlando City an 18th-minute lead before Heber’s 51st-minute tying goal for NYCFC at Yankee Stadium on April 27. 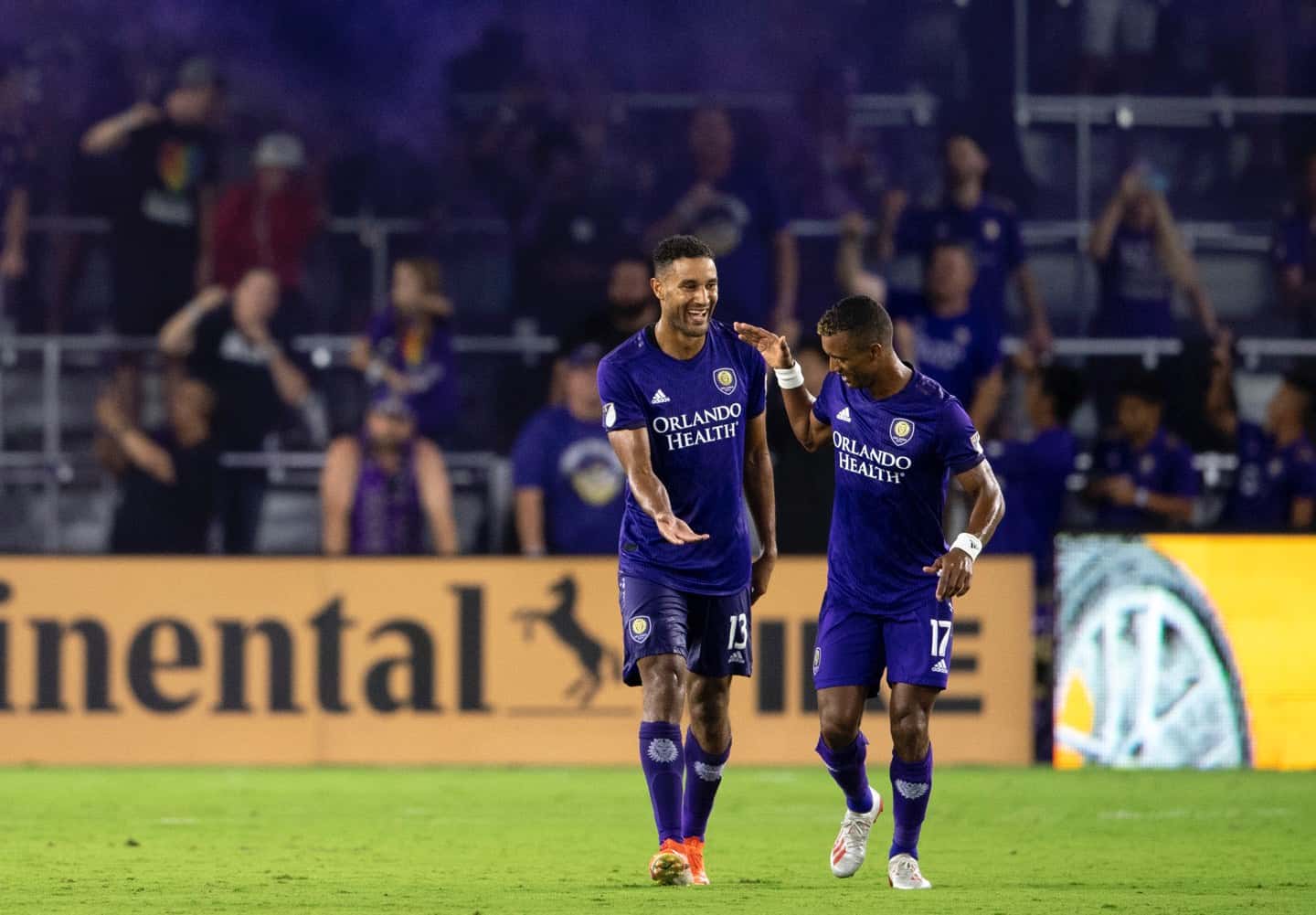 Akindele and Nani enjoying a moment for City

Memories of those matches with NYCFC are fresh for Akindele. “They’re heating up a little more but we’re familiar with them and we’re not worried about a hot streak,” Akindele said of the men from New York City, who are making a first-ever Open Cup run of substance this year. “We drew twice with them and it could’ve gone either way. We drew at the very end but we felt we outplayed them at home and we’re hoping we can do that again.”

Akindele grew up in Thornton, Colorado and played youth soccer in Golden, home of Coors Brewing Company, where his Nigerian father was employed. Golden is also the city of the academically rigorous Colorado School of Mines where Akindele studied electrical engineering and had a record-setting career on the soccer field, totaling 76 goals in 83 games. Akindele’s dominance in NCAA Division 2 might not have convinced MLS teams of his ability, but Orediggers coach Frank Kohlenstein had set up practice games with the Colorado Rapids, and in one of them, Akindele scored twice. His performances impressed then Rapids coach Oscar Pareja and, after Pareja took over FC Dallas, he selected Akindele with the No. 6 pick in the 2014 MLS SuperDraft. 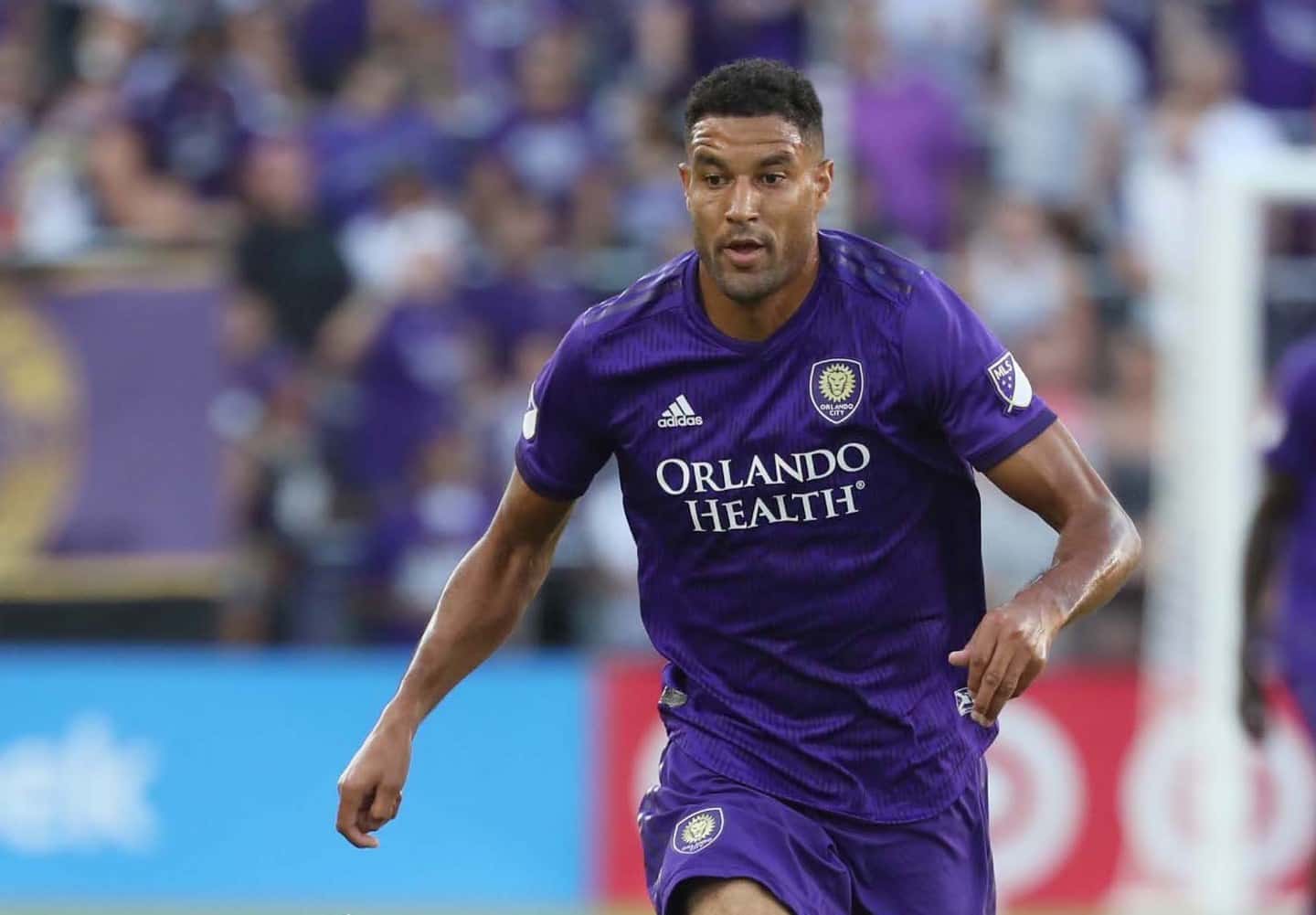 Now, Akindele is developing an effective combination as a center forward with Chris Mueller and Nani on the wings for OCSC. “It’s been interesting, he’s definitely the biggest-name player I’ve ever played with,” Akindele said of Nani, the Portuguese national team standout and former Manchester United man. “Every stadium we go to, there are a bunch of Manchester United and Portuguese fans waiting for him. I don’t think I’ve experienced that with anyone else. On the field, he’s a great player, he’s showing moments of brilliance, assists and goals.”

Orlando City stands in tenth place in the MLS Eastern Conference but, like last year, the Lions have reached the USOC Quarterfinals with the door to the Semis in touching distance. “It’s a great opportunity to play teams you’ve never played before, places you’ve never been,” Akindele said of the Open Cup. “It creates rivalries. Lose, and you’re out. There are no second chances. Do or die. You play five games to win a trophy. I feel all MLS teams at the start are thinking, man, we’re five games away from winning a trophy.”