Join usopencup.com for a deep dive down into the legend and lore of the Maccabees of Los Angeles -- giants of the ethnic-league era of the 1970s and 80s who won an astonishing five U.S. Open Cup titles and reached seven finals.
Jonah FontelaMay 17 2022
Open Cup

In 1970, Hans-Jörg Gudegast became Eric Braeden. Cast as the lead in a sci-fi thriller Colossus: The Forbin Project, Universal Studios executive Lew Wasserman told him flat out: “You’ll never star in a major American picture with a name like that.” So Eric Braeden was born in that time-honored Hollywood way. Right then and there, at age 29. But Gudegast lived on too, not in the glitz-and-glamor of red carpet premieres, but as a serviceable fullback for local semi-pro legends Maccabi Los Angeles. And he won a U.S. Open Cup title in 1973 to pair with his Daytime Emmy and a star on the Hollywood Walk of Fame.

The son of a Nazi party member, Gudegast was proud to join the predominantly Jewish Maccabees, as all former players affectionately call the LA giants who won an astonishing five Open Cups between 1973 and 1982. “When we were kids in Germany in the 1950s, we didn’t discuss the War beyond saying we lost.” Said Braeden, born and raised in Bredenbek in Germany’s north. “So joining the Maccabees was an intellectual awakening for me. I wore the shirt with pride. It was mostly about playing soccer, but it was a little more than that too.” 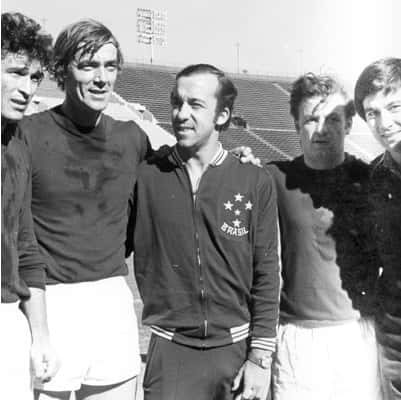 Before he signed with Maccabi, Braeden – still Gudegast and just another aspiring young actor in LA – was a member of the largely forgotten semi-pro outfit LA United. “You had all of the best players in LA in the team,” said Braeden, from his home in the mountains ringing Santa Monica. He drifted back to those long-gone days when he made 15 bucks a game on top of his wages from bussing tables at the Beverly Hills hot-spot La Scala. The restaurant’s owner Jean Leon, a Spaniard and a huge soccer fan, also owned the team. “Leon arranged a game against Real Madrid at the LA Coliseum. He was obsessed with Real – and they were the best in the world then. [Paco] Gento and [Ferenc] Puskas came to play against us. Can you believe it? It was an amazing thing for 1963 in America.”

Braeden was injured for the big game. It’s a lucky thing too, as the Merengues won out 9-0. “After that, LA United folded,” said the actor, now 77, who’s starred in dozens of movies and TV shows in a career spanning a half-decade. “That game cost Jean Leon 40,000 dollars, which would be ten times that much now.”

The Movie Star and the Maccabees

In need of a team, Gudegast found an unlikely home at Maccabi LA, the Jewish club in the local ethnic leagues. He got an extra five dollars a game there, up to 20 from 15. “I was playing a lot of Nazis in TV shows like Combat, back then but I was also playing soccer at Jackie Robinson Stadium with a Jewish Star on my shirt. And I loved it,” said Braeden, who invited his Maccabi teammates for lunchtime pick-up games on the set of Rat Patrol, where he played the sinister Nazi Afrika Korps Captain, Hans Dietrich Hauptmann. “We’d play soccer between scenes and I’d still be in my damned Nazi boots.” 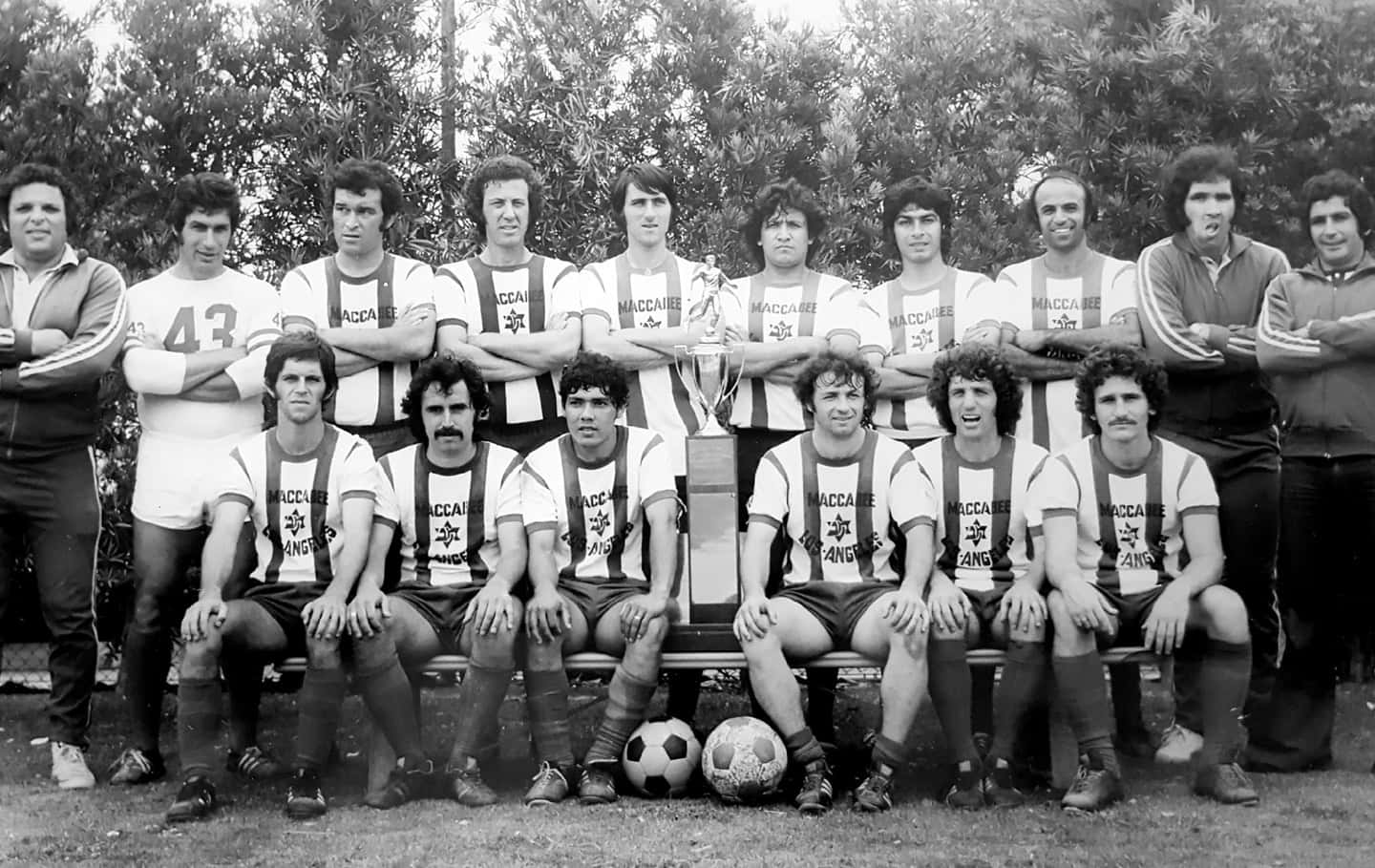 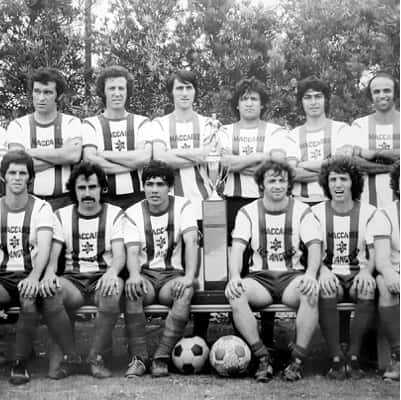 The Maccabees with the GLASL trophy
Moshe Hoftman was one of those teammates. A talented player and Israeli international, he’d emigrated to study engineering at UCLA. “This was a club founded by Holocaust survivors,” said Hoftman who played with the UCLA Bruins who reached the 1971 NCAA Final, all the while lining up on Sundays for Maccabi (the club helped pay his tuition). “Two or three of the founders nearly lost their lives in the madness of those horrible days.”

The best soccer around was found in these ethnic leagues in the years after World War II and before the rise of the first North American Soccer League (NASL). It was the same in LA as it was in New York City, where the German American League (now the Cosmopolitan League) produced Open Cup champions with names like NY Hungaria, NY Ukrainians, NY Hota and Greek-Americans AA. The Maccabees, with a prominent Star of David sewn into their white jerseys, dominated the other side of the country and the Greater Los Angeles Soccer League. “We bossed that league,” added Hoftman. Founded in 1903, the GLASL boasted teams with names like the Los Angeles Scots, the Danish Americans, LA Kickers, LA Armenians and a host of Latin American teams. “We were always champions and went on to the State Cup and the Open Cup, which really was the national championship in those days.”

It was rough-and-tumble out on those bumpy pitches in and around LA. Braeden, who wasn’t shy in a tackle, remembers them well. “With some of those teams you thought the World Wars were being fought all over again,” he laughed, remembering being insulted alternately as a F%^&ing Nazi or a Dirty Jew (he took pride in the latter, according to his teammates). “You always went early if the Serbian team and the San Pedro Yugoslavs were playing before you, because there was a brawl every time.”


Perfect from the Spot

Braeden played a crucial role in the Maccabees successful 1973 Open Cup run, their first of five. He scored the winning goal in the Semifinal against San Jose Portuguese and then the first in the 5-3 win over Cleveland’s Inter-Italian in the Final. “It was a penalty kick,” he remembered of his Final goal, his voice deep and recognizable, a warm throwback to old Hollywood. “I was very good at penalty kicks and I could teach a few things to the big stars of today. I took a full run at the ball, aimed for the keeper and put spin on it. I hit it so hard that even if he got a hand to it, it went in.” 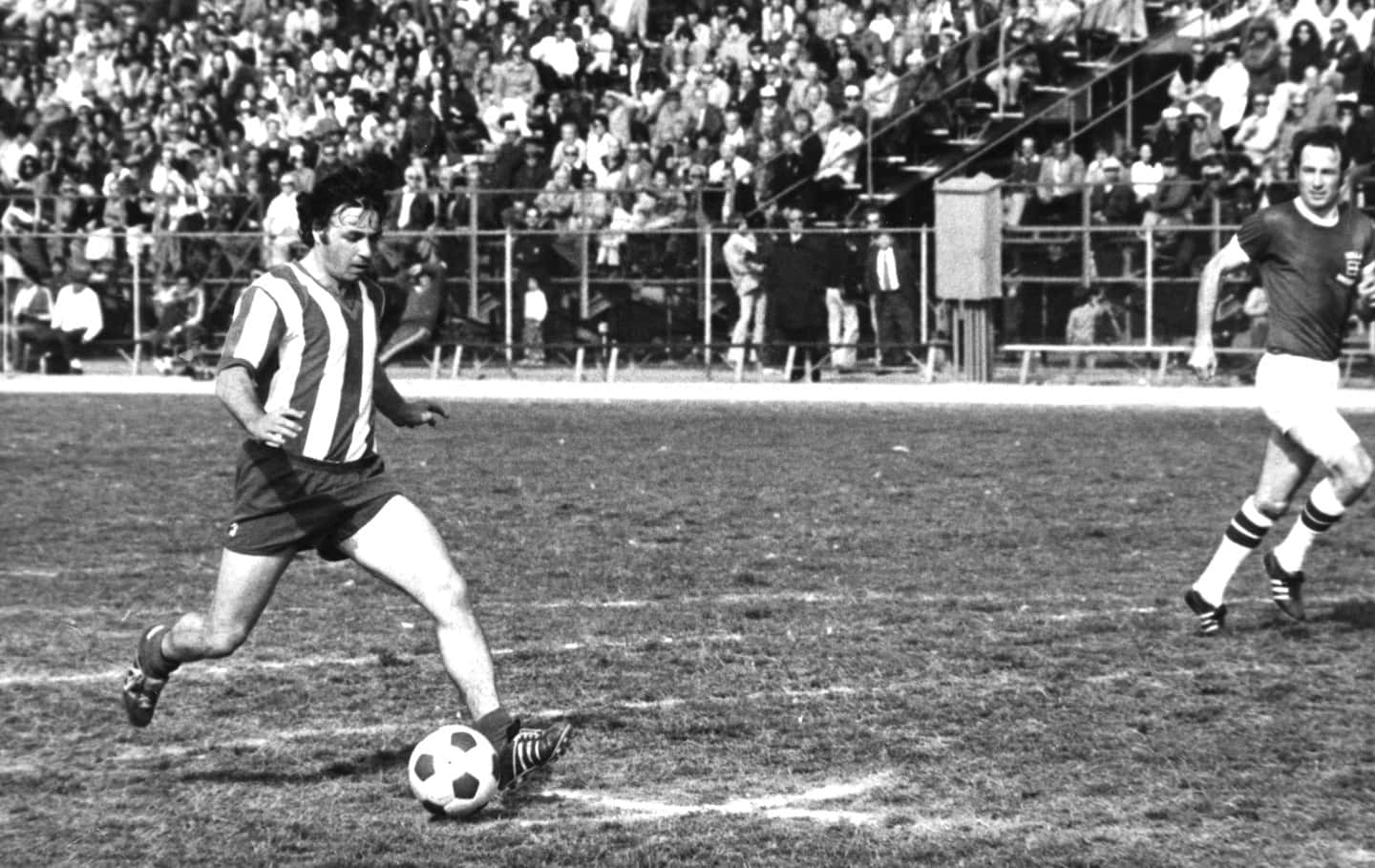 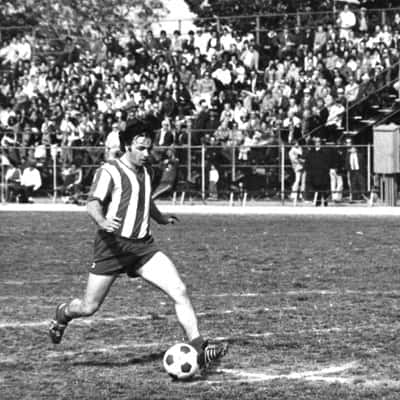 The late 60s and early 70s were turbulent years in American soccer. Regional leagues dissolved or folded into the nascent North American Soccer League (NASL), which soon attracted the likes of Pele and Franz Beckenbauer, Johan Cruyff and George Best, sparking a revolution in the American game. In those years before, the line between pro and semipro was blurred at best. So Binshtock headed west to play for the Maccabees. “It was the only opportunity for me, so I took it,” said the versatile defender, who went on to win four of Maccabi LA’s five Open Cups while working in design and toy development at Mattel, the company his uncle founded.

Binshtock’s class on the pitch didn’t go unnoticed. When the NASL had established itself as the top league in the land, drawing huge crowds in the late 70s, he was approached. “The [New York] Cosmos contacted me when they were in town to play the LA Aztecs. We met at the Regis Hotel. Pele was there!” Binshtock recalled, sure he was good enough to thrive among that cast of international all-stars. He was offered a contract, but the timing, and the money, was wrong. “I couldn’t take it! They didn’t offer me enough money to blow up my life,” he said, noting that he’d just settled down and bought a house in Van Nuys with his wife. “But if I was single, oh boy, I would have paid them for a chance to play with Pele!”

He was incredible. You could use him anywhere on the field and he could turn any game around.
Eric Braeden (aka Hans-Jörg Gudegast) on his Maccabi LA teammate Benny Binshtock
It wasn’t the last of the missed chances. In 1970, Israel qualified for the World Cup for the first and only time, and then-coach Emmanuel Scheffer was in need of talent to bolster his squad. “He came to LA and asked me to play at the World Cup in Mexico, but I needed three months off from my job.” Binshtock went to his uncle’s big corner office to request a sabbatical, but there was no guarantee his job would be there when he returned. “I was just an apprentice and so he said ‘no!’ I cried right there in my own uncle’s office! I swear I did. I remember it like it was yesterday.”


Maccabi on the Big Stage

Missed chances or no, Binshtock still had his moments in the spotlight. And on the field, he rarely missed. The 1978 Open Cup Final against Vasco da Gama of Bridgeport, CT was scheduled as the undercard of a double-header with a Cosmos vs. Tampa Bay Rowdies NASL game at Giants Stadium. He would finally, and in some way, share a pitch with Beckenbaur and Carlos Alberto. Rodney Marsh too – all the best around. “When we got to the stadium there were people camping and cooking in the parking lot,” recalled Binshtock, who played that day in front of 30,000 against doctor’s orders, having recently undergone surgery. When he came on as a sub, he set up a goal for Avram Cohen in a 2-0 win. “When we were walking into the stadium a few kids said, ‘hey it’s Benny Binshtock!’ I don’t know how they knew who I was, but they did and they even asked for my autograph too!” 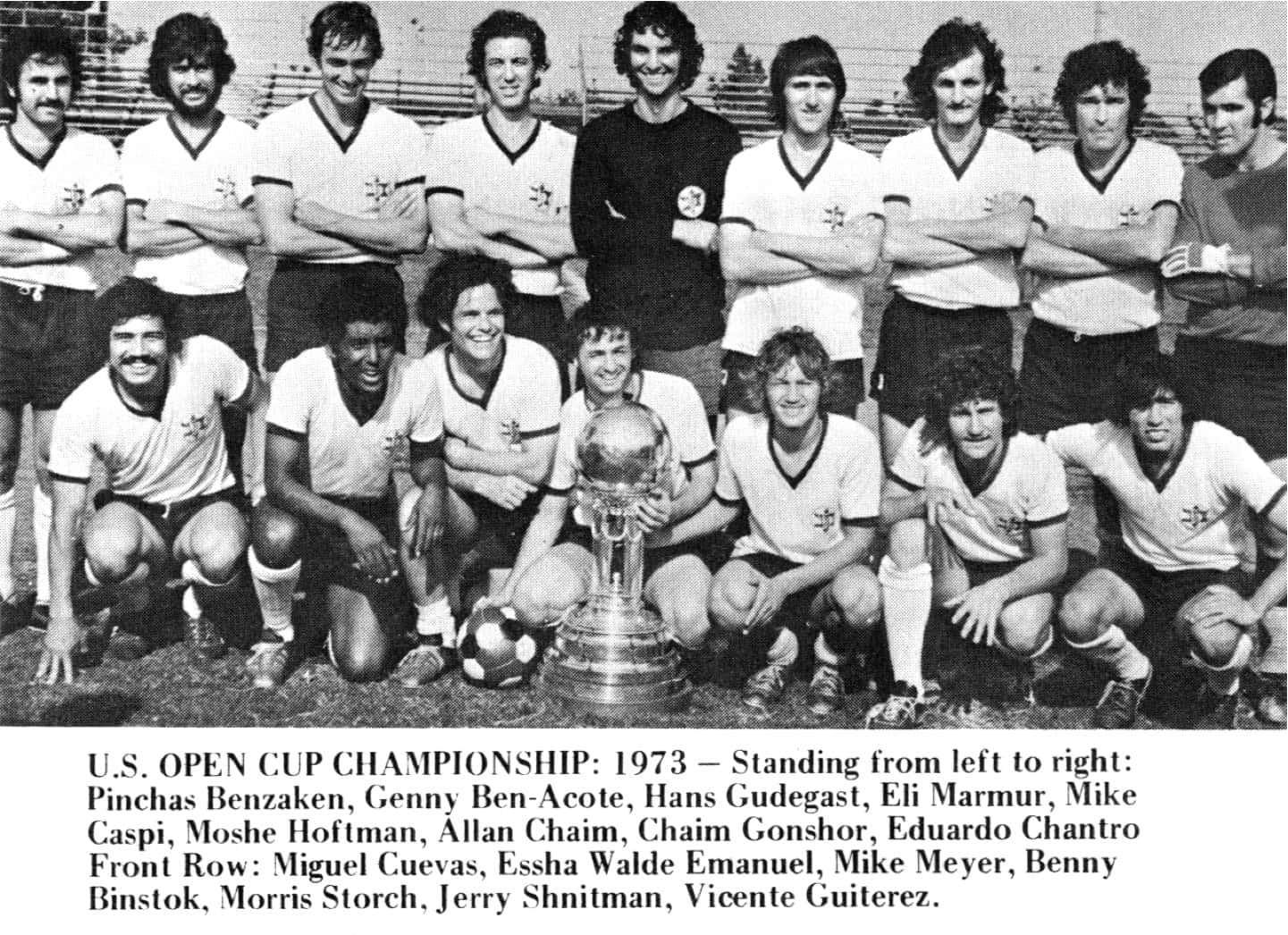 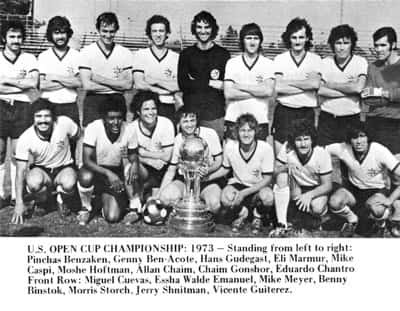 The Maccabees, as the Jewish team in an ethnic league, had to deal with small-minded abuse on the field. That’s the way things were. But in the squad, there was peace. You didn’t have to be Jewish to be a Maccabee, you just had to be good. “We didn’t just have Jewish players,” said Binshtock. There were Chileans and Mexicans, Germans and Trinidadians too. “Half the team wasn’t Jewish. They’d make the sign on the cross before coming onto the pitch, wearing a Jewish Star on their shirt. A crucifix underneath!”

Many of the surviving Maccabees get together for coffee and a chat. Every few Tuesdays at Il Forno, near the piers where you can smell the Pacific Ocean in the air. They look like any bunch of friends in their late sixties and seventies. Hair has thinned, or gone. They carry paunches and are a long way from game-shape. They talk the usual soccer talk, the kind you’d hear in a thousand bars in any country on earth. Who’s better, Messi or Ronaldo? Is Maradona better than both? What about Pele? They tell their own stories too, and they exaggerate them all out of proportion. The goalkeepers get bigger. Distances increase. Tackles become ever more savage and brawls more epic than could have been. It is Hollywood after all.

“There’s nothing like this camaraderie,” said Braeden, the movie star, when talk turns to that time, years and years ago, when they were all young and full of energy. When they could run for days. When they were Maccabi Los Angeles. “We’ve told the old stories so many times that they get a little embellished,” admitted Binshtock, the star of the show, the champion of missed chances, a toymaker for 50 years who’s lived enough for two lives and is still young in his heart. And he wouldn’t trade any of it. Not for the world. “I’m happy and I’m lucky,” he said, laughing.
Related Gallery 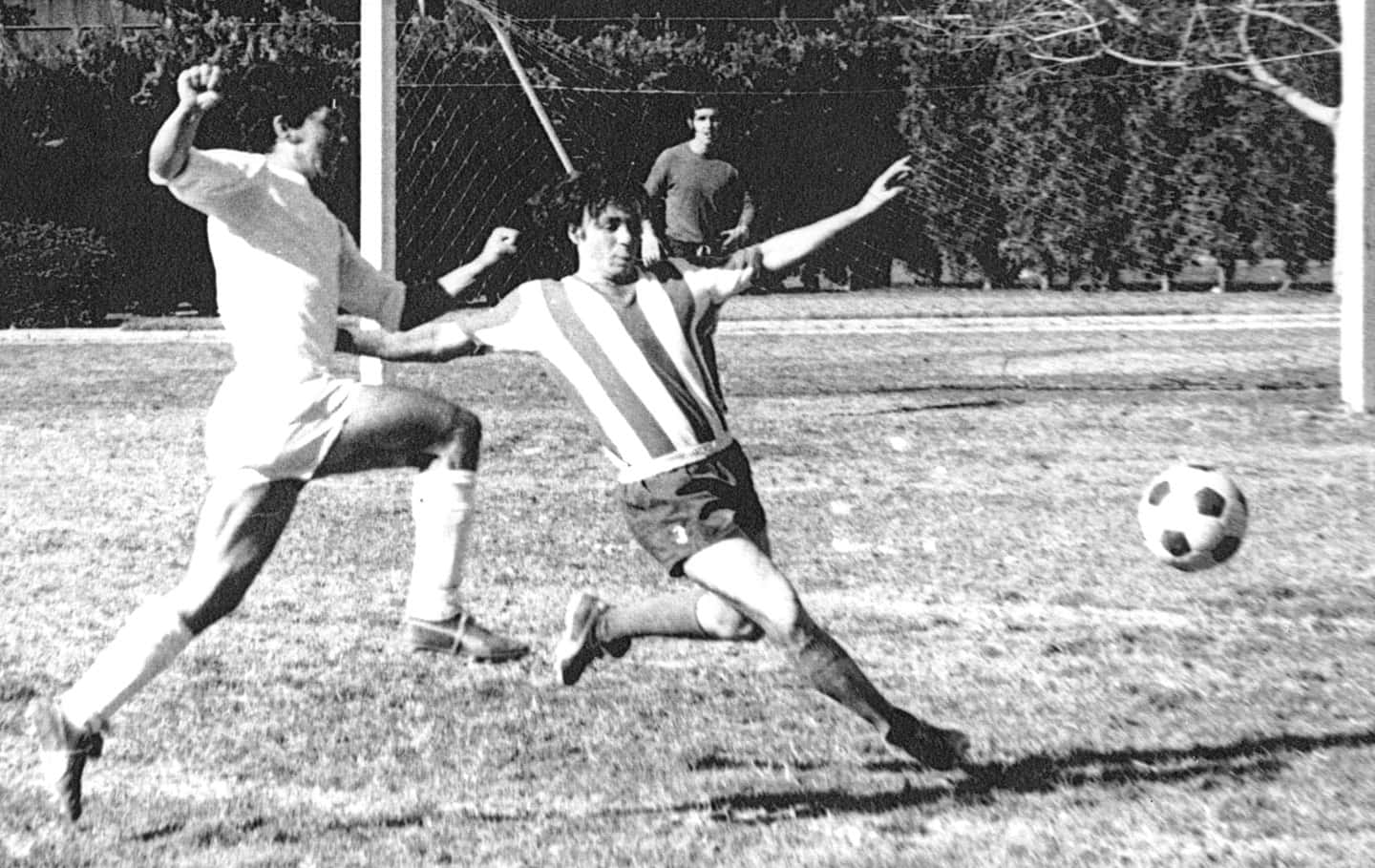 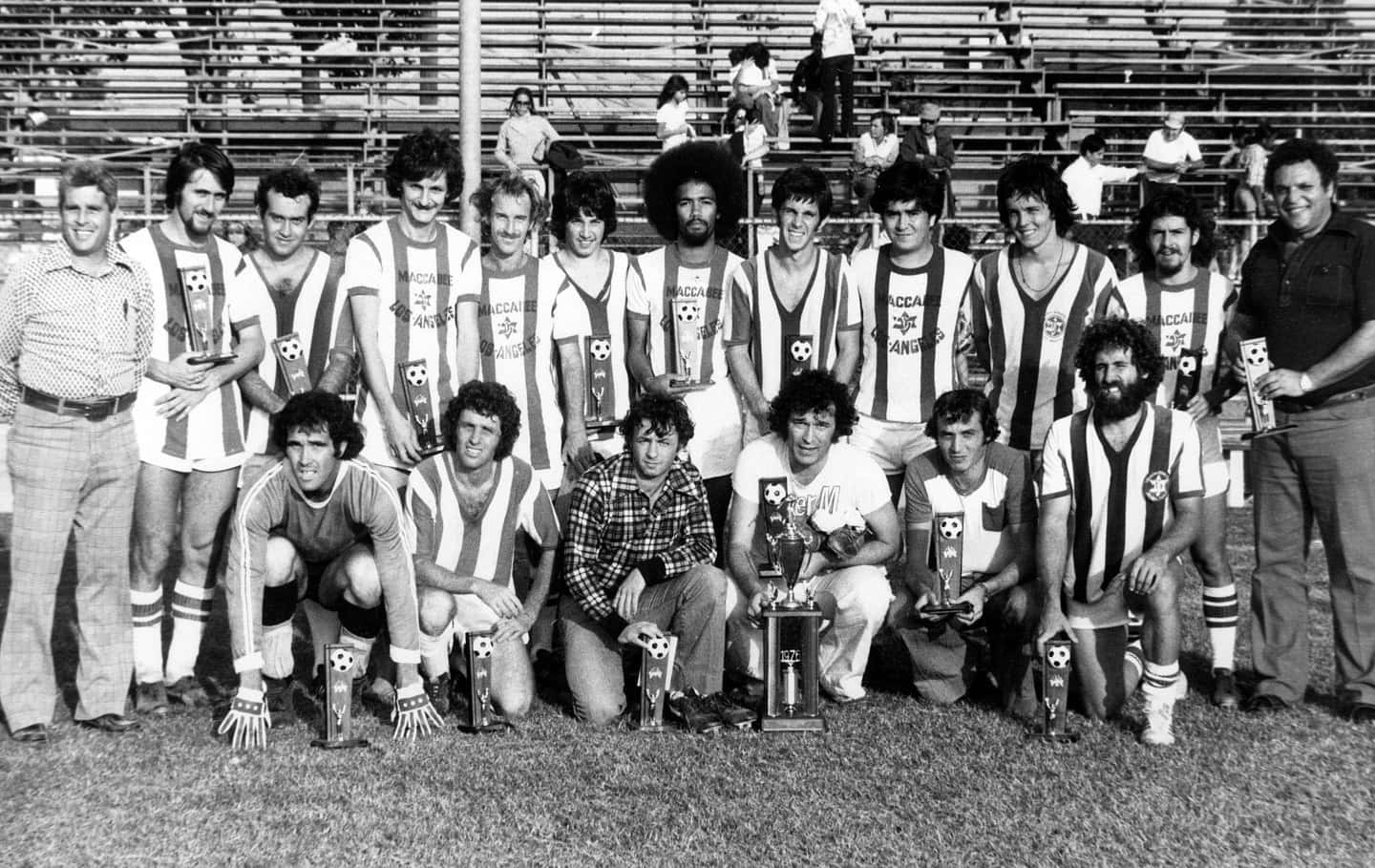 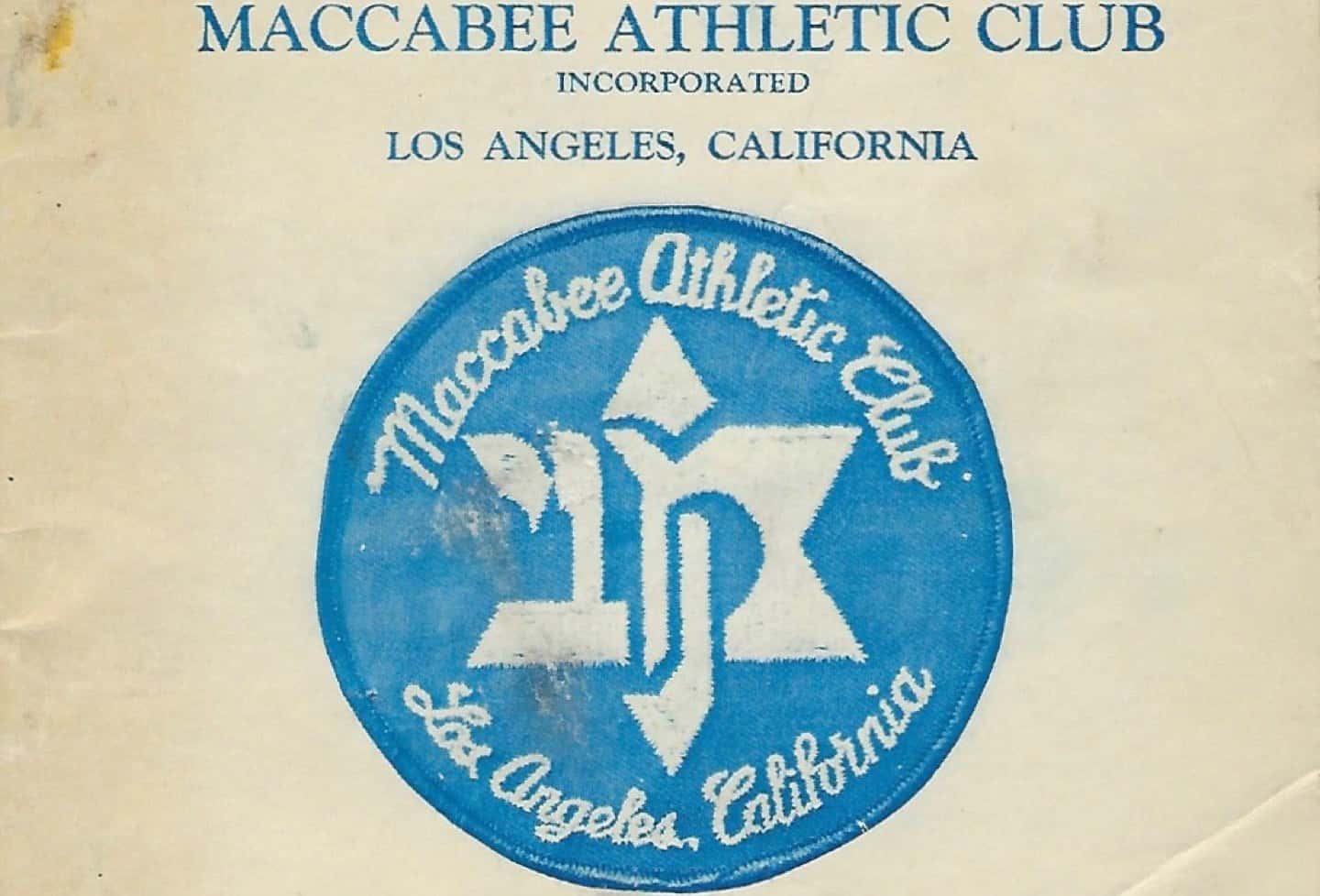