July 5 2019
Featured
On Wednesday night, the U.S. Men’s National Team advanced to Sunday’s 2019 Concacaf Gold Cup Final against Mexico by virtue of a 3-1 victory against Jamaica at Nissan Stadium in Nashville, Tenn.
The win set up a much-anticipated showdown with rivals Mexico in the championship match Sunday, July 7 at sold-out Soldier Field in Chicago (9 p.m. ET; FS1, Univision and UDN).
Here’s the USA’s route to a tournament-record 11th Gold Cup Final.

Rolled Through the Group Stage

The U.S. Men’s National Team began its Gold Cup preparation on May 26 in Annapolis and built up to the tournament with friendlies against Jamaica (June 5) and Venezuela (June 9). With staggered arrivals and players at different stages of fitness, the matches helped in the building process and bring focus to the task ahead – getting to the 2019 Concacaf Gold Cup Final and ultimately winning the tournament.
Opening the competition in St. Paul, Minn., things started off quickly as the USA utilized a two-goal performance from newcomer Tyler Boyd to ease past Guyana 4-0 on June 18. Boyd’s first goal registered his name in the history books as the 1,000th in USMNT history. 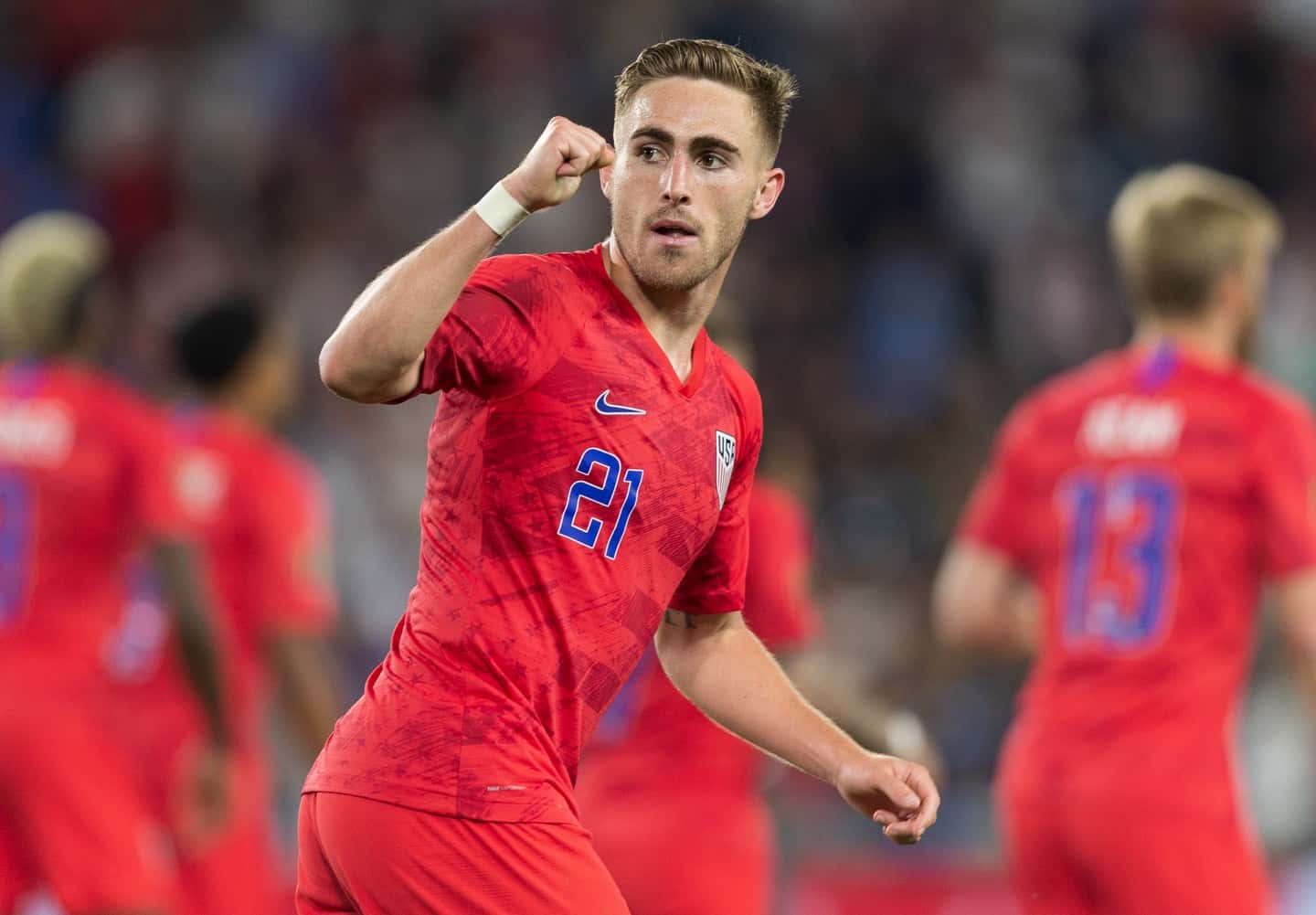 A showdown loomed four days later as the USA faced Trinidad & Tobago for the first time since the Caribbean nation ended the team’s hopes of going to the 2018 FIFA World Cup. With a spot in the quarterfinals on the line, Aaron Long and Gyasi Zardes registered the USMNT’s first double brace since 2008, while Christian Pulisic provided a goal and two assists in a 6-0 rout of the Soca Warriors.
Following the match, the 20-year-old made it clear there was a little something extra in the game for him against Trinidad, saying, “I didn’t like to say it, but I definitely had a little chip on my shoulder today. I hope you could see that.”
With both the USA and Panama already booked for the Knockout Round, the group stage finale between the sides would determine who would finish on top of Group D. Both teams made numerous changes, with USMNT head coach Gregg Berhalter putting out an entirely different starting XI than the first two matches. While a tighter contest, the USA used Jozy Altidore’s inspired 65th minute bicycle kick to earn a 1-0 victory on June 26 in Kansas City. 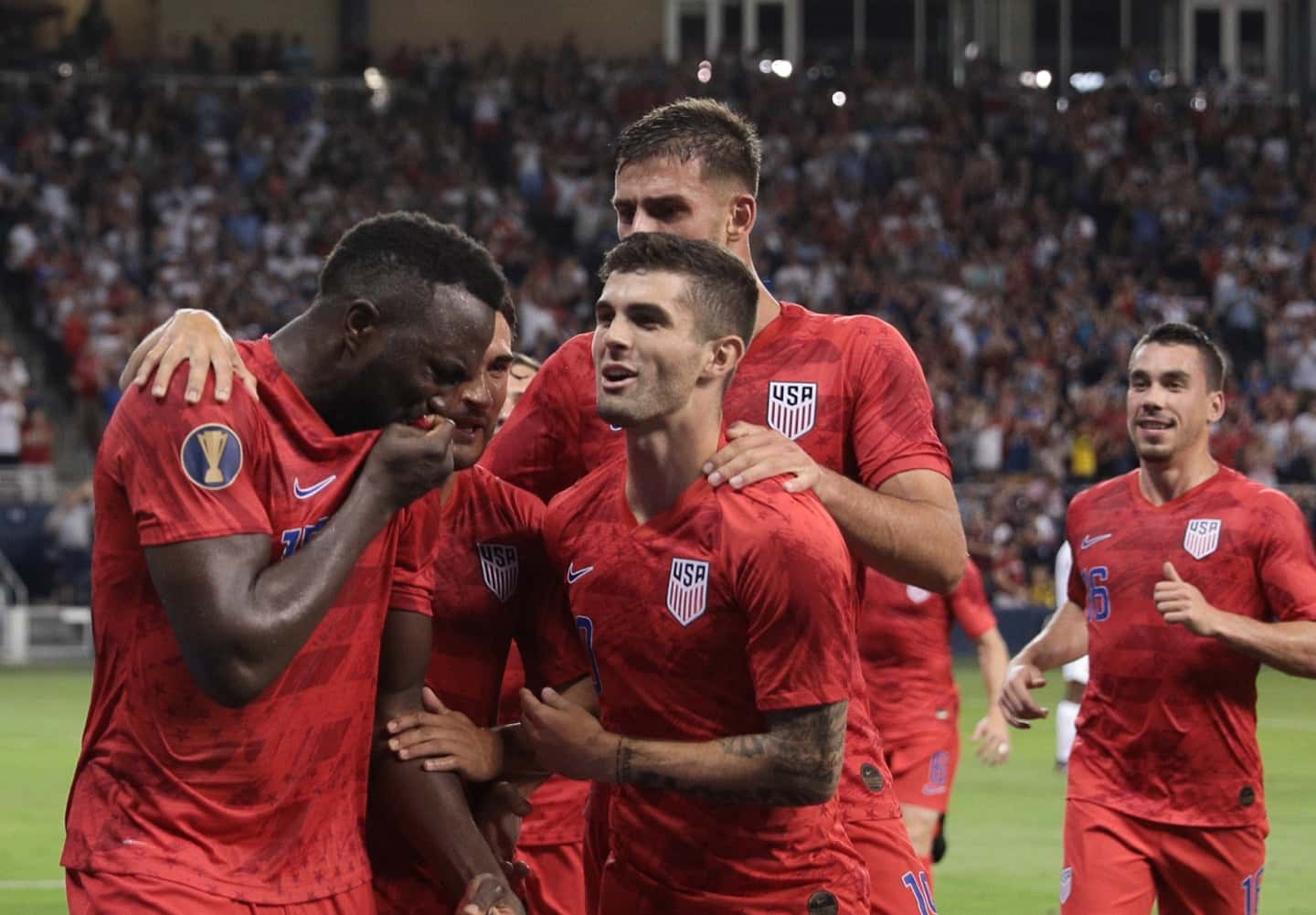 The goal was Altidore’s first for the team since October 2017 and earned him Budweiser Man of the Match honors, but more importantly pushed the USA top the top of its Gold Cup group for the 14th time in 15 editions of the tournament.

The clash setup a quarterfinal showdown with one of the tournament’s Cinderella stories, the tiny Caribbean island of Curaçao. While representing a country of approximately 160,000 people, the island’s strong ties to the Netherlands meant the team included a number of players born and raised abroad and ply their trade in that country’s professional leagues.
Returning to the same lineup from the first two matches, the USA utilized Weston McKennie’s 25th minute goal and a strong defensive performance in the second half to grind out a 1-0 victory on June 30 in Philadelphia. The shutout was the USA’s fourth straight, tying the team record for consecutive clean sheets at the Gold Cup which first occurred in 2002. 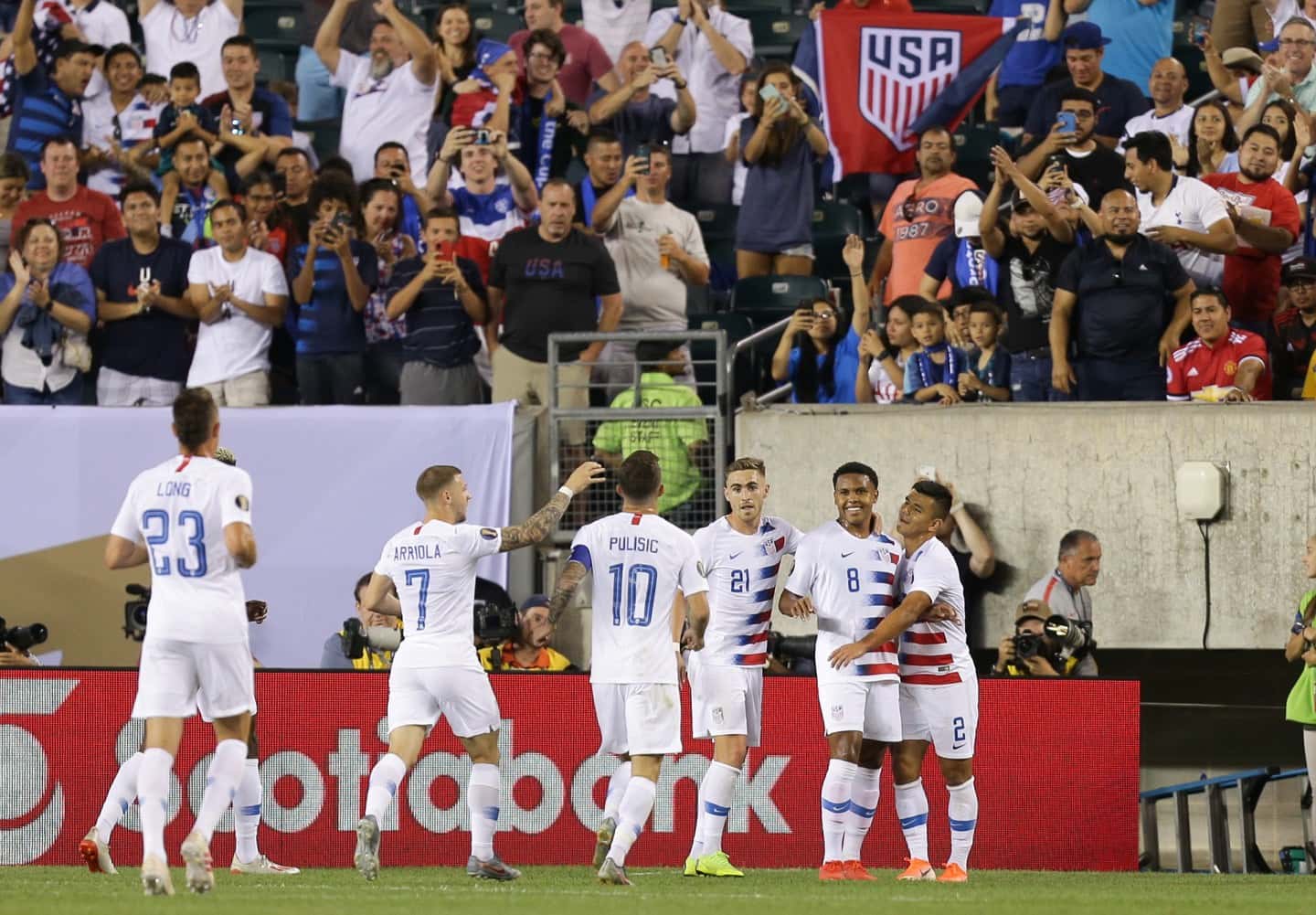 That win setup a semifinal date with the same Jamaica side that defeated the USMNT 1-0 about a month earlier in Washington, D.C. With a place in the 2019 Concacaf Gold Cup Final on the line, the USA came out of the locker room charged up, teeing up some early chances before a well-worked goal led to Weston McKennie finding the back of the net for the second time in as many games.
Shortly after the goal, inclement weather in the Nashville area forced the teams to clear the field, with play delayed for 87 minutes. The pause allowed Jamaica to reset and the teams played out the first half evenly, before Christian Pulisic pounced on an early second-half rebound to give the USA a 2-0 advantage. 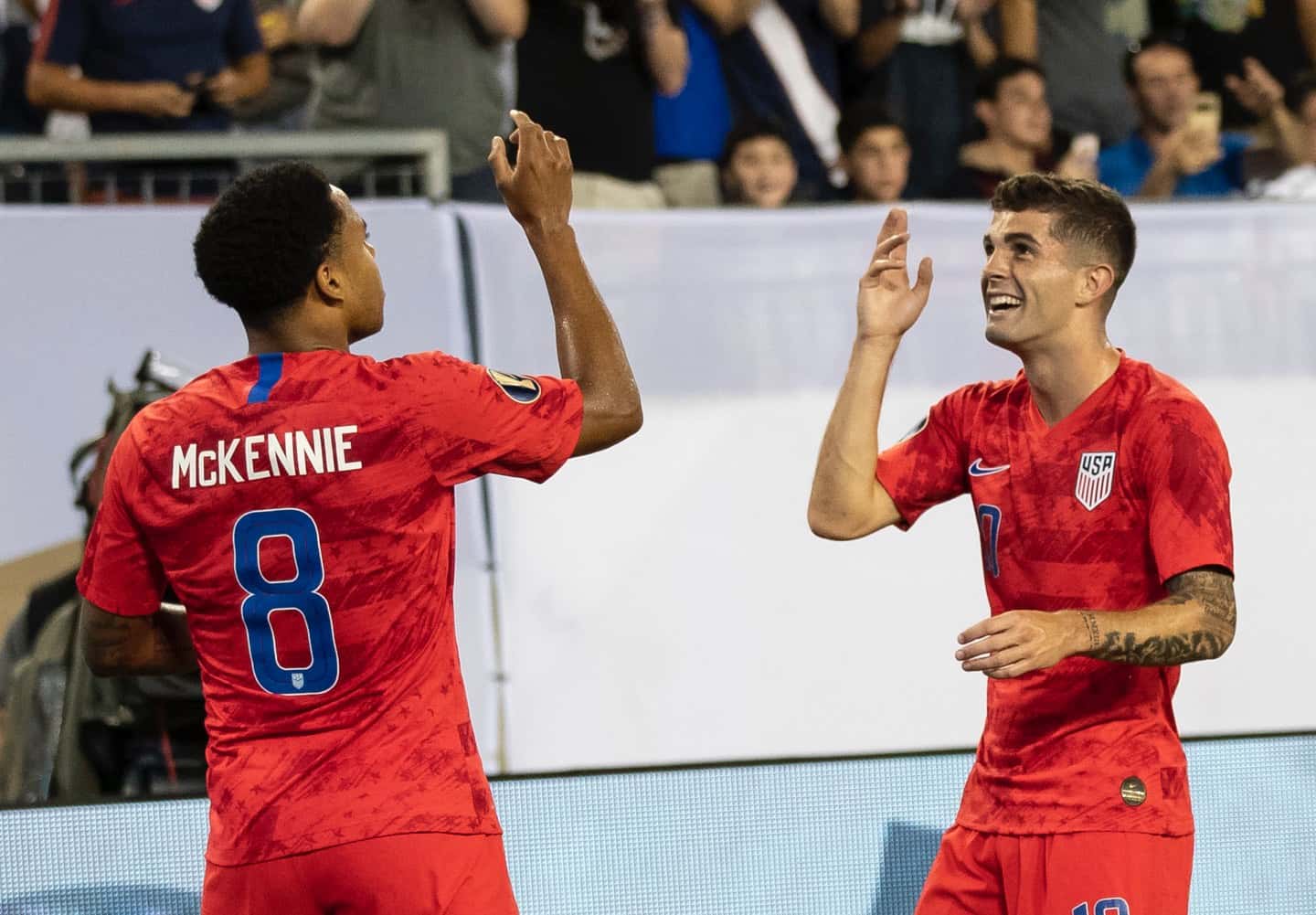 Jamaica struck back through Shamar Nicholson in the 69th minute – ending the USA’s shutout streak at 483 minutes and once again tightening up the match, but Pulisic seemed determined to put the game out of reach and turned in another rebound in the 87th minute to ice the game and send the USA to Sunday’s Gold Cup Final.

A FINAL VS. MEXICO

With the USA’s win on Wednesday and Mexico’s 1-0 extra time victory against Haiti on Tuesday night in Phoenix, the two Concacaf giants will meet in the Gold Cup Final for the sixth time in tournament history.
“There’s nothing better than playing in a final,” Michael Bradley said of the USA’s coming appearance in a record 11th Gold Cup Final. “As athletes, as competitors, you want to play in the biggest moments, when everything is on the line and a final is just that. When you add in the fact that it’s Mexico, our big rival where there’s so much history, passion, respect, it makes it even better.” 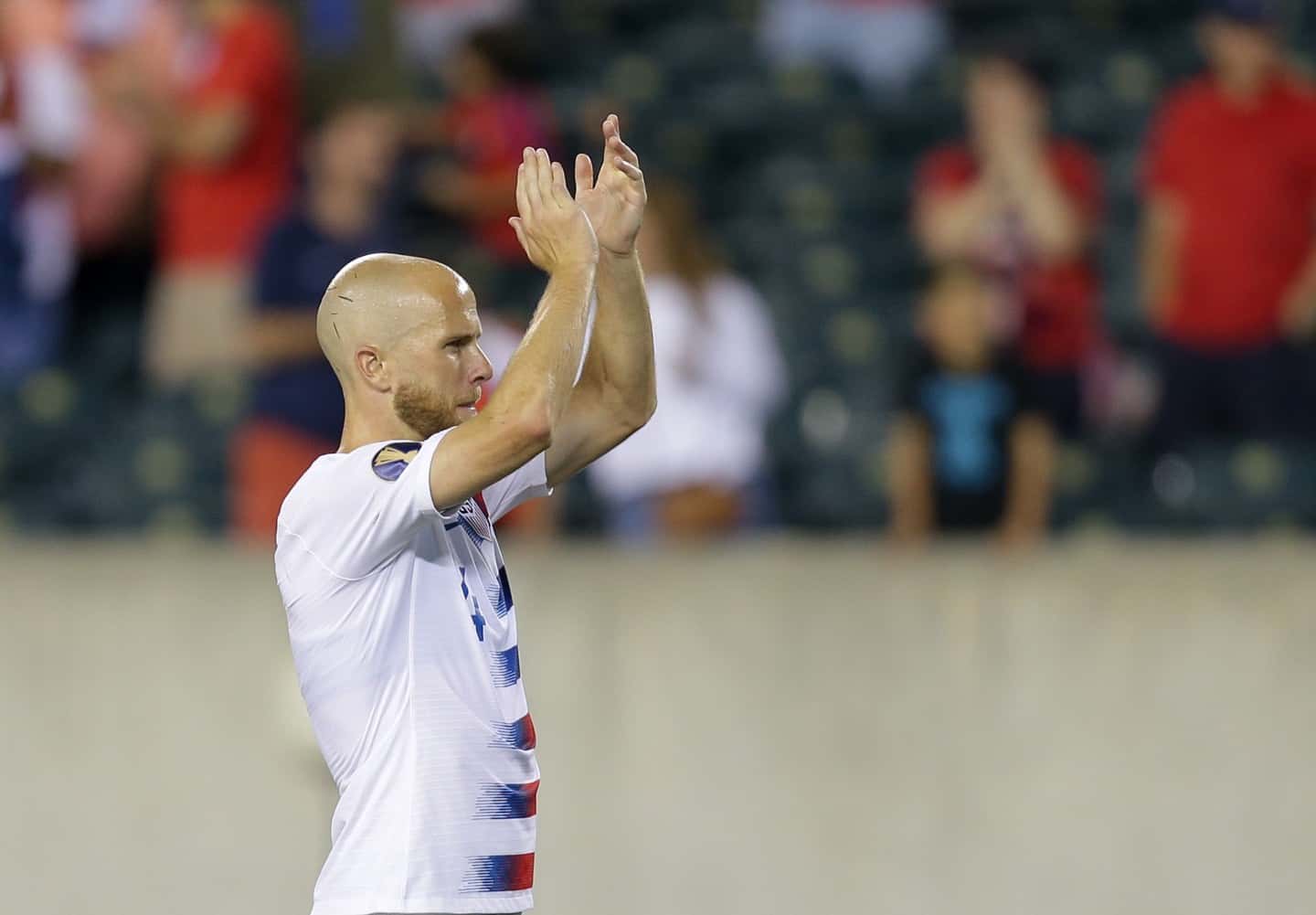 Regional supremacy is truly on the line during Sunday’s match. If the USA should win, it would move level with Mexico with seven Gold Cup titles. And while El Trí holds a 4-1-0 edge in Gold Cup Final play, the USA’s one win came during the 2007 match at Chicago’s Soldier Field, site of Sunday’s match and just steps away from U.S. Soccer headquarters. Soldier Field was also the site of the USA’s 2013 Gold Cup Final triumph against Panama, and overall the team is a perfect 7-0-0 against Concacaf sides at the historic Chicago venue.

Through five matches at the 2019 Concacaf Gold Cup, the team has registered 15 goals – already the second most by the USMNT at the confederation championship after the 20 scored in six matches in 2013.
The USA has received goals from seven different players during the tournament, with six finding the back of the net more than once.

While goals have been part of the equation in the U.S. team’s success, strong defensive work has also pushed the team to the final. For the first time in 15 editions of the Gold Cup, the USA didn’t give up a goal during its three group-stage matches and kept clean sheets in four-straight matches at the tournament for just the second time.
Setting out to keep the best goal differential in the group stage, that has carried over into the whole tournament, with the USA’s +14 mark besting Mexico’s +11.
Tags
MNT
2019 CONCACAF Gold Cup
USMNT vs. Mexico - 7/7/2019