The Brooklyn Italians – More than a Club

With MLS’ New York City FC gaining traction in the 2019 edition, we embark on a journey back in time & look back at the last team from the Big Apple to lift the U.S. Open Cup: the Brooklyn Italians.
Jonah FontelaJuly 2 2019
Open Cup

Borough Park is not Williamsburg. The corner of 58th St. & 18th Ave is Brooklyn-Brooklyn and the headquarters, the still-beating heart, of the Brooklyn Italians Soccer Club. “It used to be Italian people as far as you could see in this neighborhood,” said Ludo Masucci, current club director, unlocking the front door and nodding to a family of Hasidic Jews who pass. “All the way up to 85th street. To Bensonhurst and the Bay.”

He threw a switch inside and the fluorescent bulbs warmed over an old social club. It’s an ethnic club like thousands of others established by Italians and Poles and Slovaks and Portuguese. These waves, these eager arrivals through the 19th and 20th century, through to the end of World War II, made America the place it is today. They made New York City’s borough of Brooklyn a miracle of a melting pot. But this one social club is a little bit different. Trophies of all shapes and sizes line the walls like a parade. Pictures of Pele and former club president Joe Manfredi smile out from behind the glass of a trophy case. There’s a young Maradona. Is that Franco Baresi? This club is a museum. It’s not well curated – there are piles and stacks of this and that – buried treasures waiting for attention, but it’s a monument packed with mementos of titles and triumphs.

The Brooklyn Italians before winning the 1991 Open Cup Final

The sign over the front door says it – it bellows out in block letters: U.S. Open Champions 1979 & 1991. Founded 1949. “Everyone knows the Brooklyn Italians,” said Masucci. He smiled at a group of children tapping on the glass, eyeing the trophies along the ledge. “They always come up to us and say, “we know the Brooklyn Italians!”

Strong Roots & a String of Names

The Brooklyn Italians have gone by many names in these last 70 years. They were Inter-Brooklyn Italians, Inter SC and even Boca Juniors for a year. They were Palermo FC and the Brooklyn Dodgers (they won the 1979 USOC under this name) before they came around and settled back on Brooklyn Italians. They won the Open Cup twice, in 1979 and 1991, when it was still known as the National Challenge Cup. And they went to two other Finals (’81 & ’90). They are widely considered one of the best Americans teams during those days when everyone had a day-job and semi-pro was as good as it got.

“I just loved to play the game,” said Silvio Montalto, captain of the 1979 Cup winners, now in his sixties and surrounded by photos of his younger self and the team that beat local heroes and three-time Open Cup finalists Chicago Croatia (HNNK Hrvat) in the summer of 1979. “My high school team in Brooklyn was pretty bad – they didn’t know anything about soccer. Some of the Italians from the other high school teams told me about Brooklyn Italians and that’s how I ended up here.” 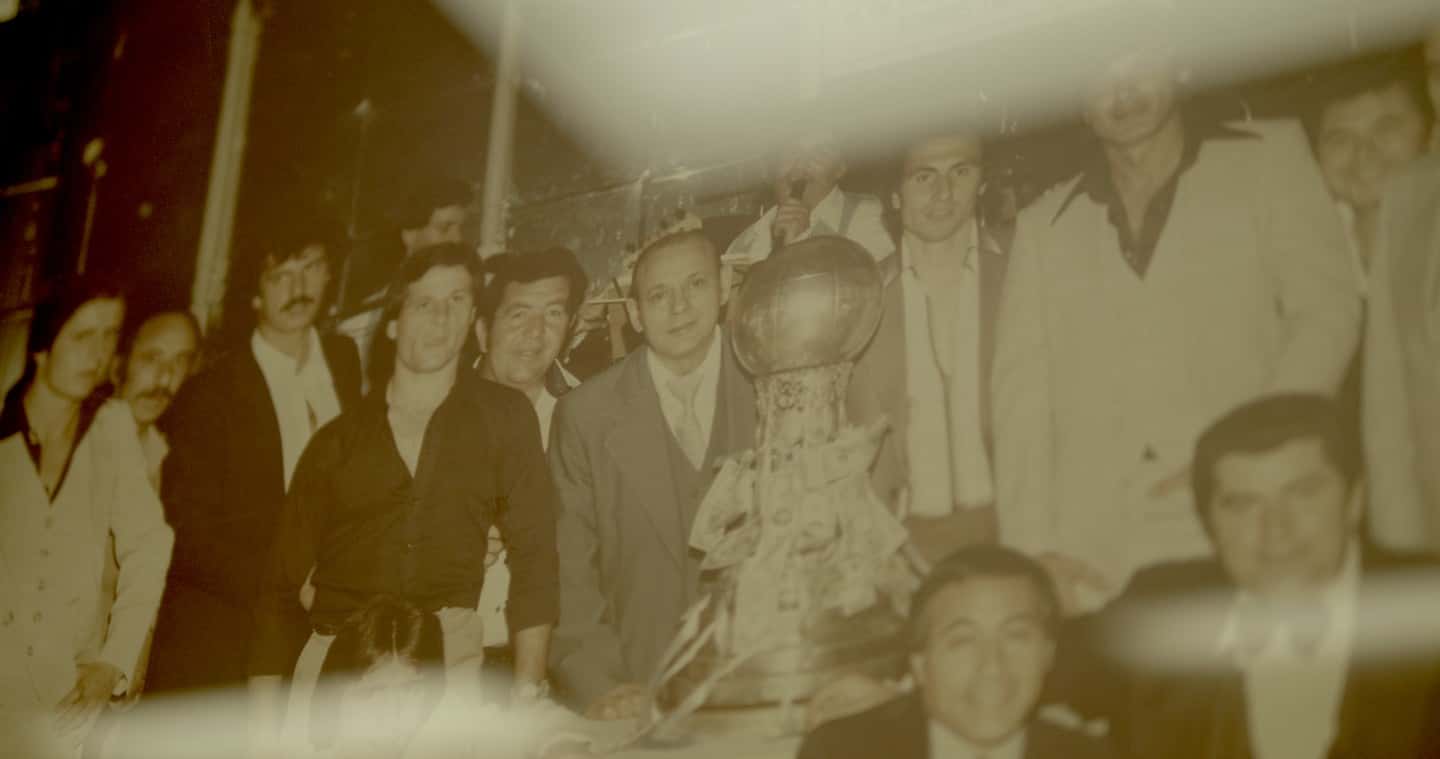 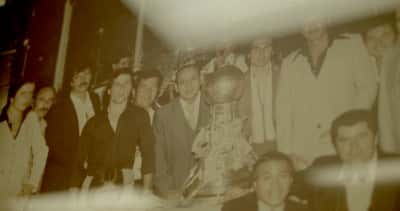 Montalto went on to play for 16 years, a Brooklyn Italian from 1970 to 1986. “Sixteen years. Straight. Non-stop,” he said with a big smile, his espresso cup tiny in his huge hands. While Montalto was one of the best midfielders in the country, he was also a construction worker. “It wasn’t easy to keep up with practice and games and the job. We were getting paid to play, but it wasn’t enough to live on,” said Montalto, his accent from the South of Italy, from Palermo, Sicily, still thick all these years on. “But for me, I just loved to play. It wasn’t about money, or amateur or pro. League games, Open Cup, whatever. Here in Brooklyn, out on the road. I just loved it.”

“If he were playing today, he’d be a huge star,” an old man from a corner table said of Montalto. His three companions nod. Montalto will happily tell you about the time he had a trial with Juventus. Ask him how it went? He’ll wink and answer: “how do you think?” How far he could have gone or would have gone are debates with nostalgia – the never-ending fodder for lazy afternoons over coffee at the club. But when Montalto was in his prime, the Brooklyn Italians were the best in this country, or right there among it. 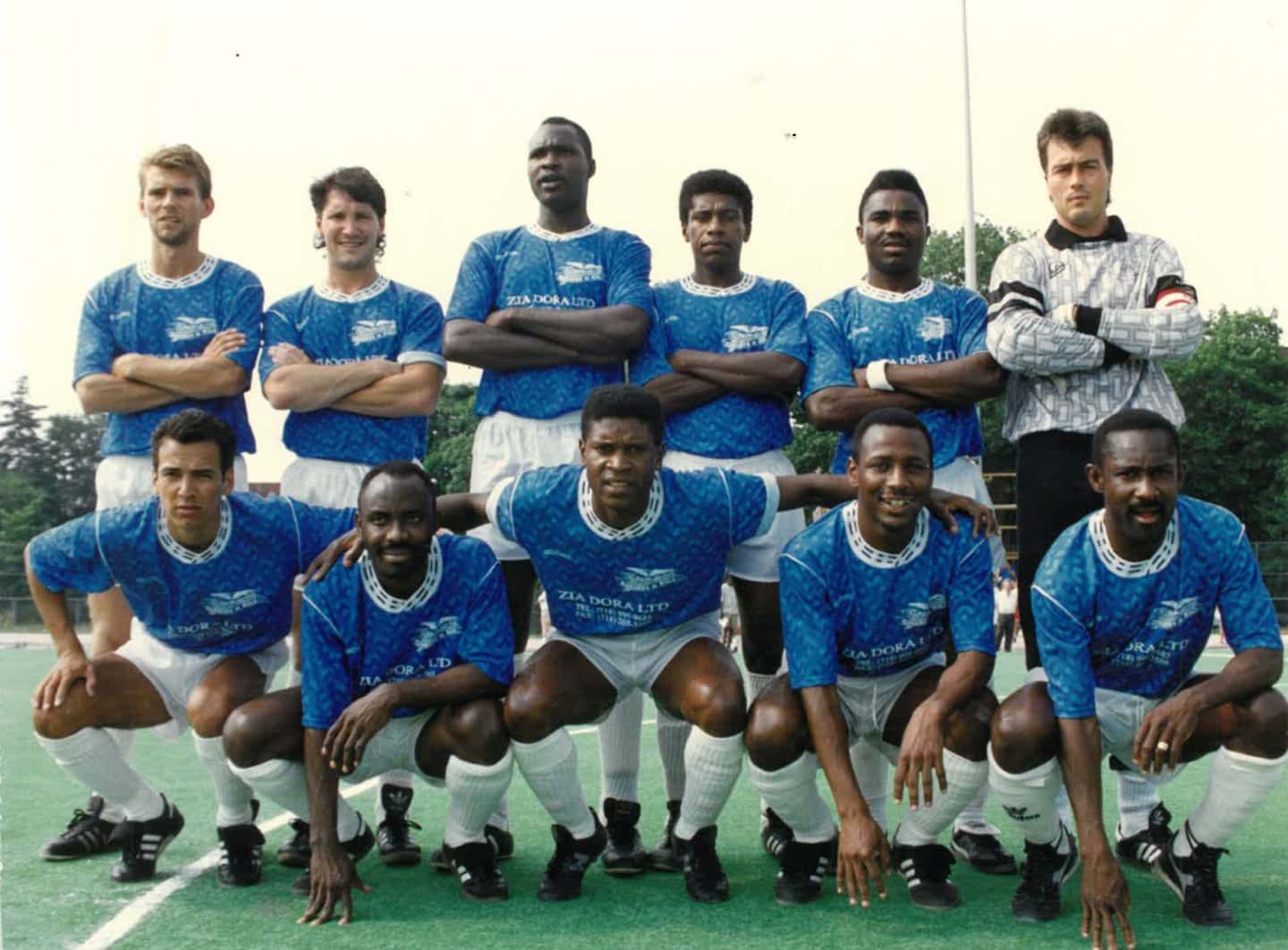 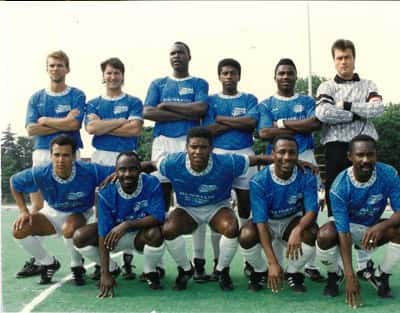 The 1991 Open Cup winners before that year’s Semifinal

It was the same in the late 80s. In those days Mike Windischmann was the captain of the U.S. Men’s National Team and his club was the Brooklyn Italians. It was listed right there on the team sheet when he traveled abroad to compete at the 1988 Olympic Games in Seoul. Today he laughs when he remembers waiting around in Brooklyn, there at the social club, for someone to finish their coffee and drive him back to Long Island after a game.

“A lot of people ask me now, ‘how come you didn’t leave New York and go play somewhere else?’ and I always tell them that the Brooklyn Italians was some of the best soccer in the country,” said Windischmann, a defender who came to Ridgewood, Queens with his parents from Germany when he was still just a baby. For Windischmann, it was a straight line from the Brooklyn Italians to the 1990 World Cup in Italy.

A Club fit for an American Captain

“There was so much talent in the Brooklyn Italians back then,” remembered Windischmann, who called the club home between 1985 and 1988. He still lives in Queens and teaches physical education in Hollis. “We hardly ever lost. We won everything we played in. I didn’t need to go anywhere to find better soccer or a better team.” 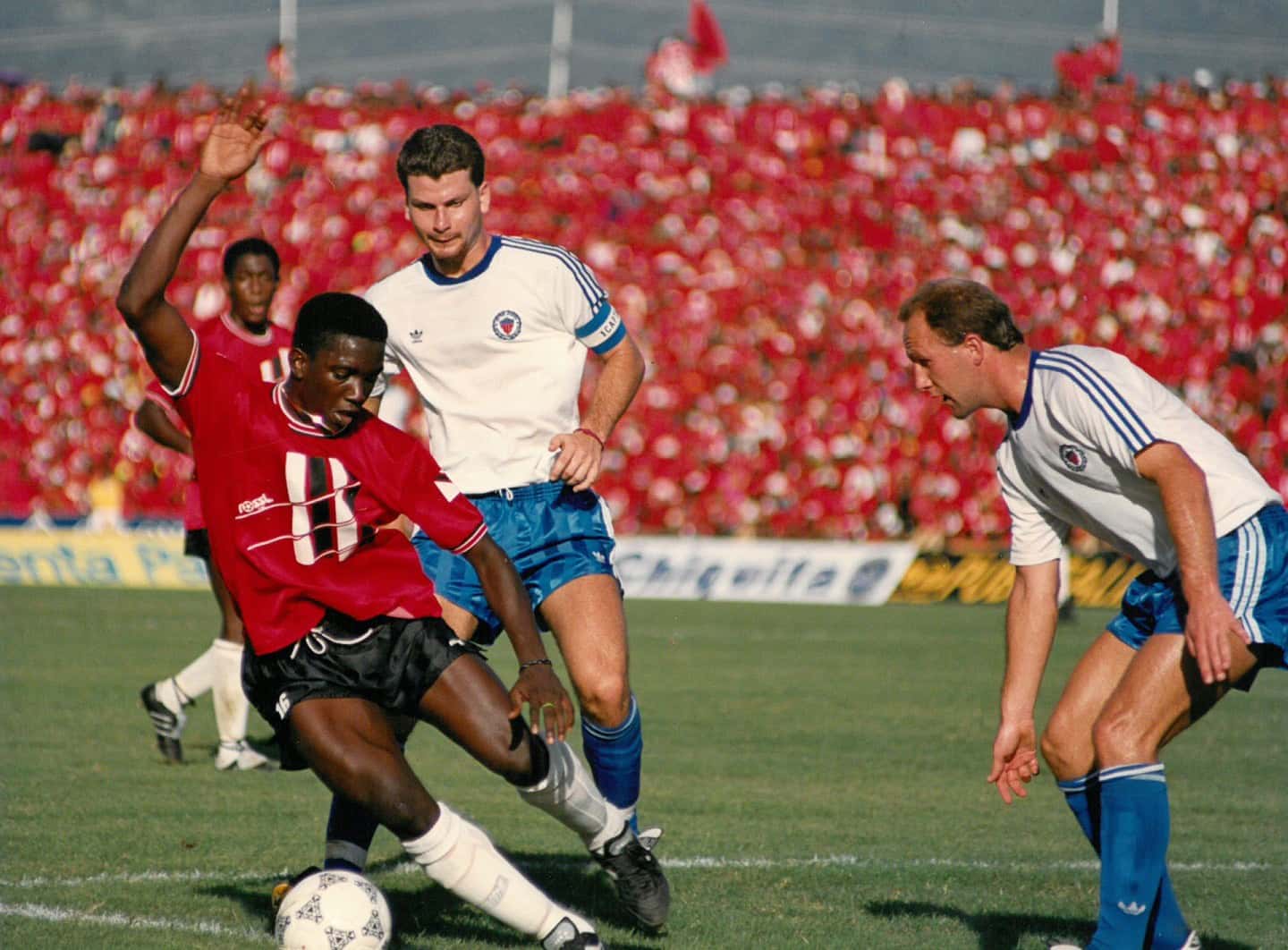 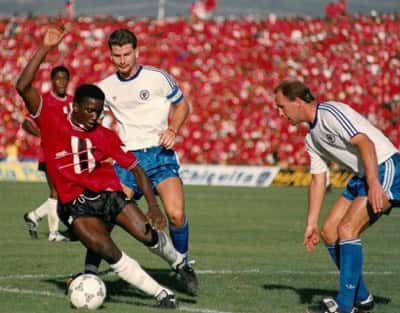 The list of luminaries who’ve pulled on a Brooklyn Italians jersey – and likely waited for rides back home while the bosses sipped coffee and commiserated – is a long one. Hubert Birkenmeier (Cosmos, NASL), Tab Ramos of the U.S. National Team, USA captain John Harkes, Dragan Radovich (NASL), Windischmann himself, Cosmos and Iran international Andranik Eskandarian, former New York Red Bulls and Mexico National Team boss Juan Carlos Osorio, U.S. international Carlos Llamosa, Toronto FC President Bill Manning and Shalrie Joseph, head coach of Grenada’s national team and a former MLS all-star and Open Cup winner with New England Revolution. And the list goes on. “Who can remember all of them,” asked former club president Jerry Valerio. He joined as a member in 1974, became vice president and then took over the big chair in 1987.

“Our secret was that we had good players,” said Mike Ryback who coached the team for eleven years and won the Open Cup in 1991. “You can have the best coach in the world but without the talent on the field you’ll win exactly nothing.”

Ryback had emigrated from Russia in 1980 to Brighton Beach, where he still lives today. He didn’t speak a word of English. “Lucky for me there was a Russian player in the team, Len Roitman, and he was my translator in the beginning before I got caught up.” 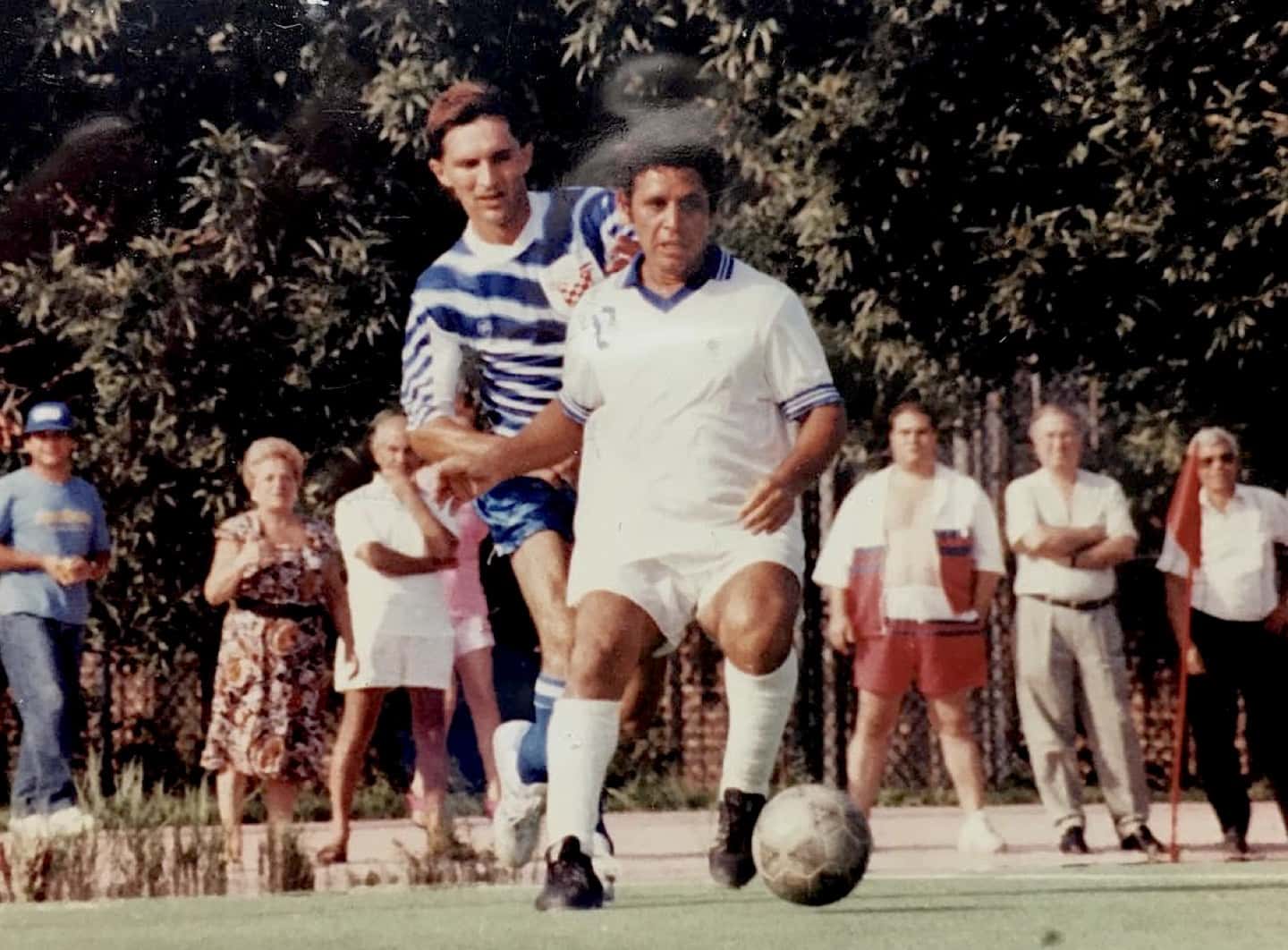 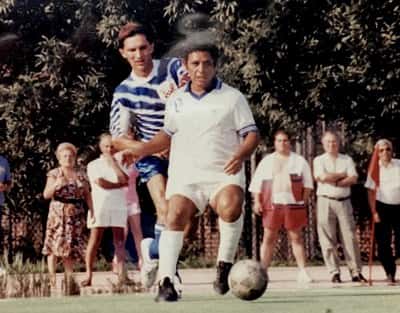 The neighborhood came out for Brooklyn Italians games

They may have been known as The Italians, but those teams from the 70s, 80s and 90s were an international smorgasbord. “We had guys from Africa, Latin America, American guys, Irish guys, Haitian guys – you name it – we had it,” said Junior Superbia, an elegant midfielder from Sao Paulo, Brazil. “It was a very diverse club. And what came natural to us was playing a possession-based game. It translated right away from a great team on paper to a great team on the field.”

Superbia, who was cut weeks before the New England Revolution’s first MLS game in 1996, was a member of the Brooklyn Italians side that won the 1991 Open Cup after losing the Final the year before. “It was one of the toughest losses of my life,” Superbia remembered of the game that turned on a mistake by one of the club’s greatest-ever players, goalkeeper Dragan Radovich. “We suffered the next year too. We played for 75 minutes of the ‘91 Final a man down after Bill Manning got a red card…but even without him, playing with ten, it was like we were in the zone. It felt like at least eleven!”

“The talent we had was so fun to think about,” said Ernest Inneh. He scored the only goal in the 1991 Final. He never worried about the early-era artificial turf at their home field, having grown up playing on dust and dirt in his native Nigeria. “Back then we used our brain and our skill – not our physicality. It was about dribbling; about making the other guys look stupid. No one does that anymore.” 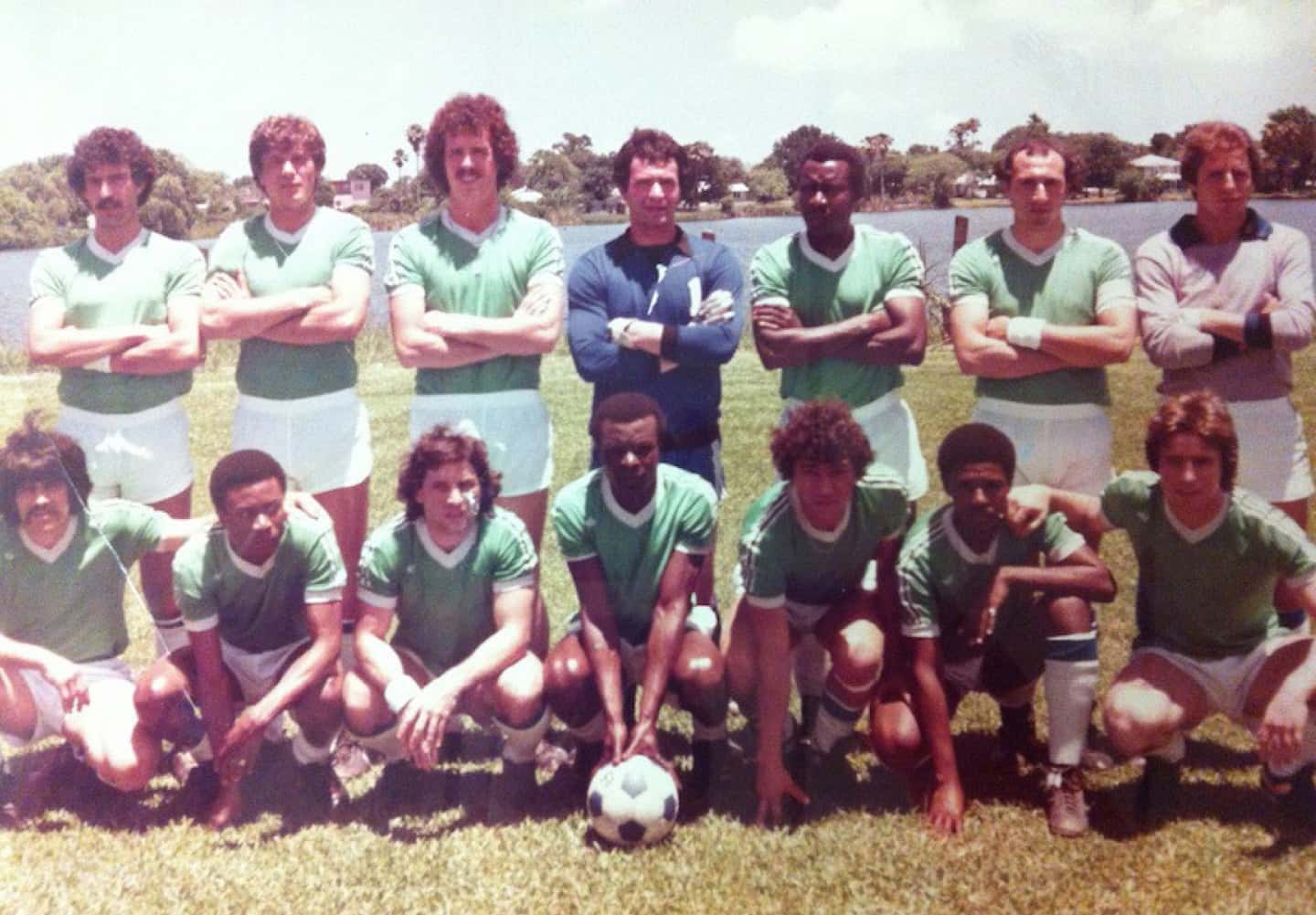 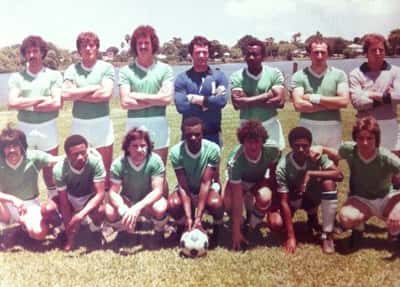 The 1979 Open Cup winners – then known as the Brooklyn Dodgers

Nostalgia is thick among the Brooklyn Italians when they talk about those good old days. The heat becomes hotter. The opposing players get bigger. Stronger too. The brawls become pitched battles and they’ll swear they played both halves of every game going up hill.

What they remember clearest, and best, is the celebrations. “We had the whole plane to ourselves on the flight back from Chicago,” said Montalto of the trip home from the ‘79 Open Cup Final. “It’s difficult to put words on it because it was so unbelievable. We were champions of the whole USA. We never won anything so big. We couldn’t stop smiling.”

“I remember lifting the trophy and feeling so light – the fans were all with us and around us,” said Superbia, soft-spoken and thoughtful when he remembers being surrounded by fans and friends at Brooklyn College after the ‘91 Final. “I exchanged jerseys with one of the Richardson Rockets players.” 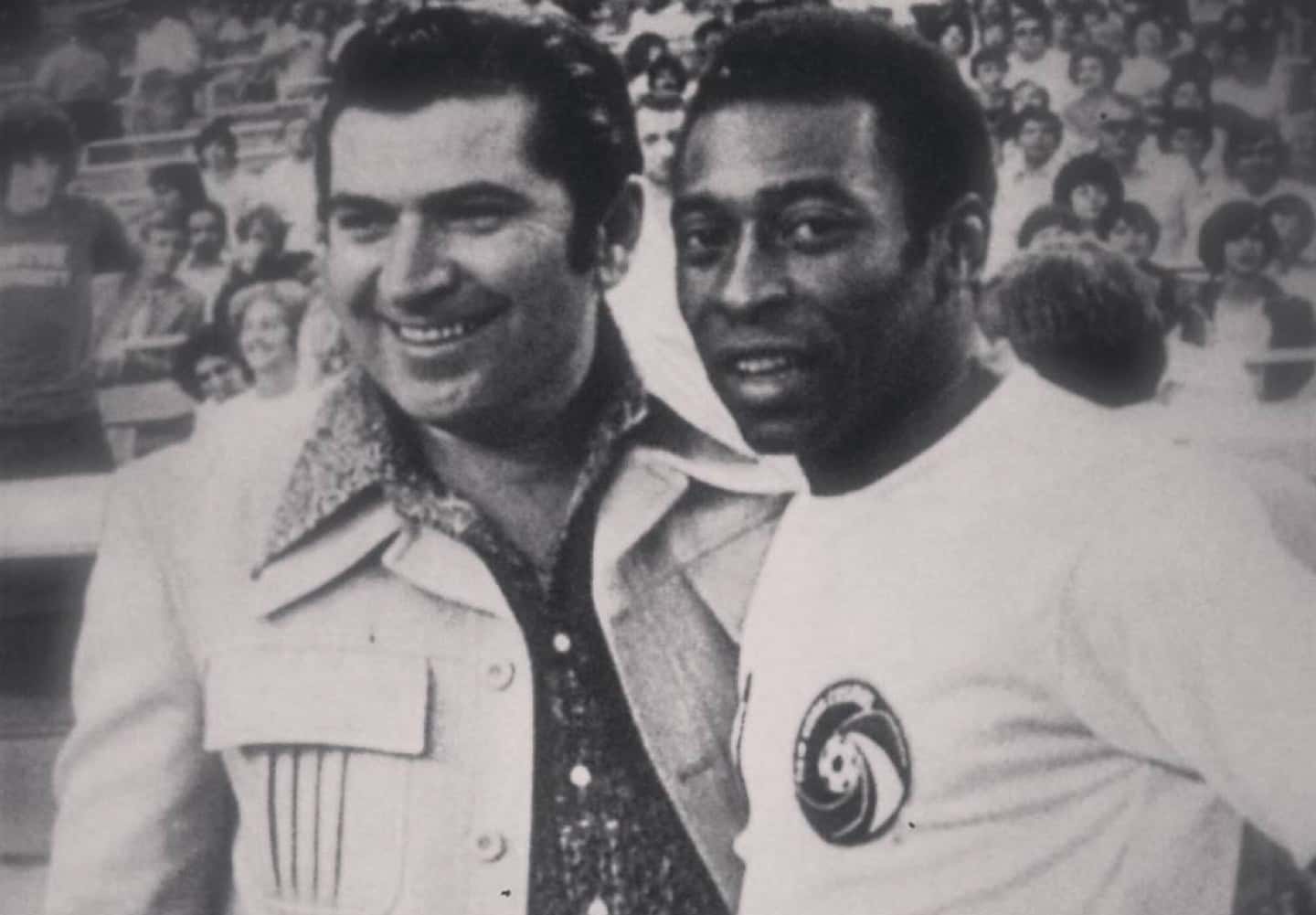 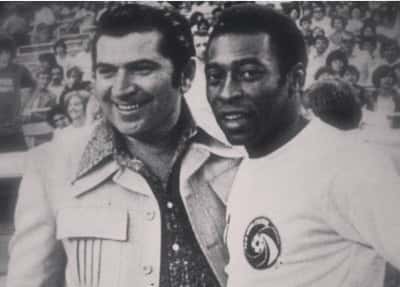 Jerry Valerio, to this day, is still upset about the sending off of Bill Manning in that Final, the last Open Cup won by the Brooklyn Italians. But he remembers the celebrations with a smile. “Both teams, even the ref, came to a restaurant in Coney Island and we had just a beautiful time.” Superbia nodded: “We all came together at the restaurant and we celebrated. It felt like such a great thing because we knew what it meant to play for the Brooklyn Italians. We played from the heart.”

“I didn’t sleep that whole night. I was too excited. I was like a kid,” said Valerio, now 80 years old. His eyes water from age and emotion. All of the Brooklyn Italians, each closer to old than they are to young, light up when they remember the champagne – of what it felt like to be a champion for that Sunday, no matter what you had to do come Monday. “When you’re young you’re happy because you win something,” Montalto said, eyeing himself up on that wall and behind glass. “But when you look back now, from distance, you realize how special it really was.”