The Spirits of Saint Louis

Saint Louis FC captain Sam Fink is humble in the face of a history-chasing run in the 2019 Open Cup – where he and his team are tapping into the fighting spirit of the Gateway City’s soccer legends of yesteryear.
Jonah FontelaJuly 6 2019
Open Cup

Ask the Saint Louis FC captain about the winning goal he scored late against FC Cincinnati to send his hometown underdogs into the 2019 U.S. Open Cup Quarterfinals and he’ll tell you how great the cross was and how hard his teammates fought. “People throw the word around a lot, but we really are a family here,” the no-nonsense defender, Saint Louis through-and-through, will tell you in a voice raspy not from badgering and growling but from supporting and encouraging. “It’s my honor to lead them out.” 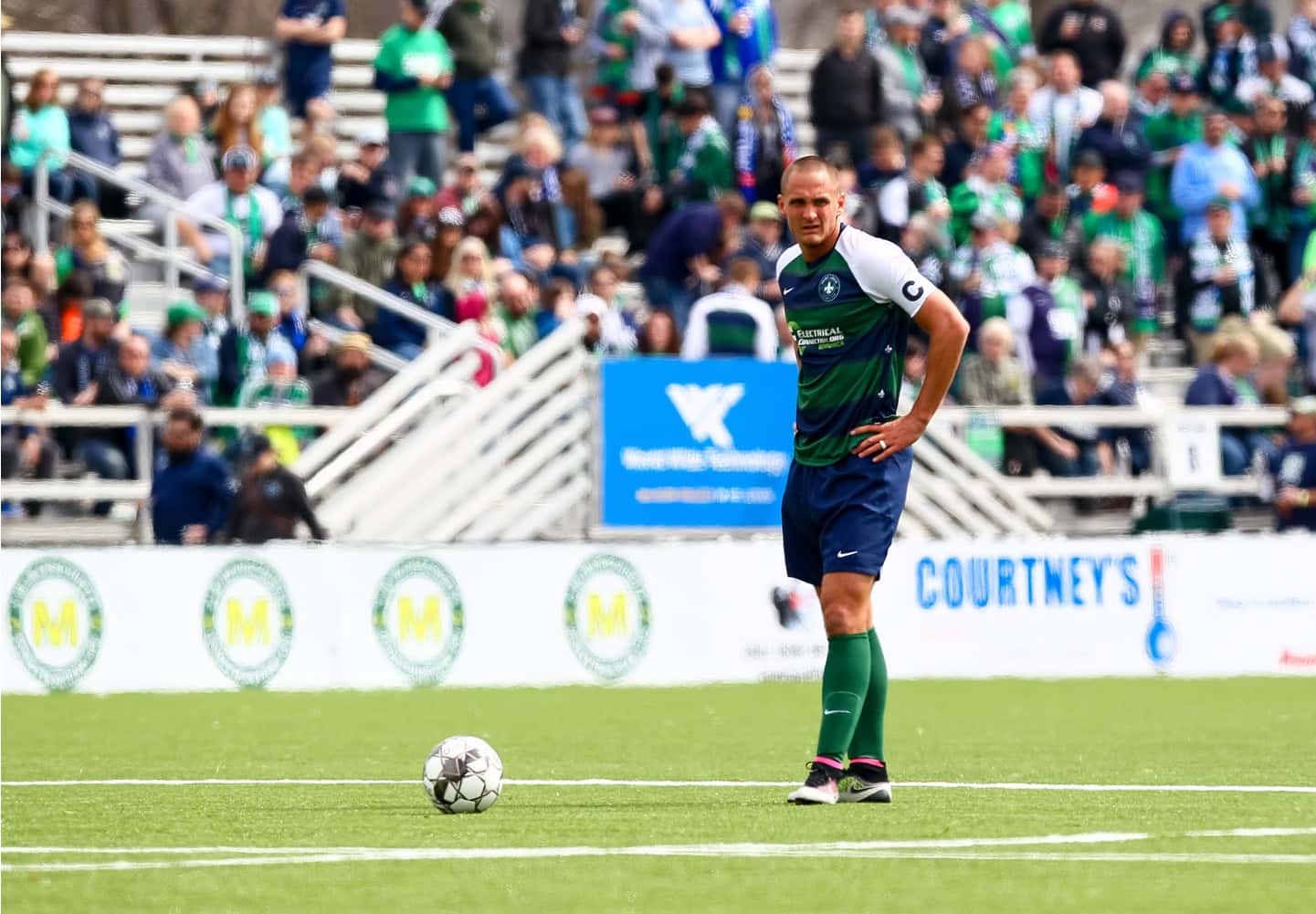 Maybe it’s just a Saint Louis thing. Modesty’s a prized virtue in this Gateway City. Ask 87-year-old Bill Eppy, winner of the 1957 U.S. Open Cup with Saint Louis Kutis, what it felt like to lift the trophy. He’ll take out a piece of paper, put on his reading glasses and rattle off the names of his teammates. “Ruben Mendoza, he was some player. We had Butch Cook too. God only knows what his real first name was,” extols Eppy, a tough-minded midfielder in his day. “Looby and Herman Weckie. And, of course, there was Harry Keough…he ran the whole show.”

Sam Fink sounds a little like the late Harry Keough too, part of that same Kutis side of 1957. He was captain of the U.S. National Team that beat England in Belo Horizonte, Brazil in one of the greatest underdog stories in the history of the World Cup. Keough never bothered much with his own part in that seismic result. He turned his attention instead to Frank Borghi, the goalkeeper who grew larger and larger until he filled the whole of the goal. The English couldn’t breech him. “With those big hands of his, he was without a doubt the star of the game,” Keough said of Borghi, a fellow son of Saint Louis and a two-time Open Cup-winner with Simpkins-Ford in 1948 and 50. “They should have carried him off the field twice!”

“Sam leads by example on the field,” Saint Louis FC coach Anthony Pulis says of his foraging captain who, born and raised in Bridgton, Missouri, came up through SLFC’s youth system. “He’s an old-fashioned center-back who just loves defending. He has fantastic leadership qualities – he’s got everything we want in players and in people. He always wants to get better and learn and he’s a joy to work with.”

Not one of Fink’s teammates will contradict that. He’s the kind of leader you break your back for. He’s the first one in when the going gets rough. He tackles hard. He never dogs it and he’s in among them doing the dirty work when it counts. And when the hard work was done, three minutes into second-half stoppage time against FC Cincinnati in the Round of 16, it was Fink who rose highest at the back post to slam the ball home with a towering header. 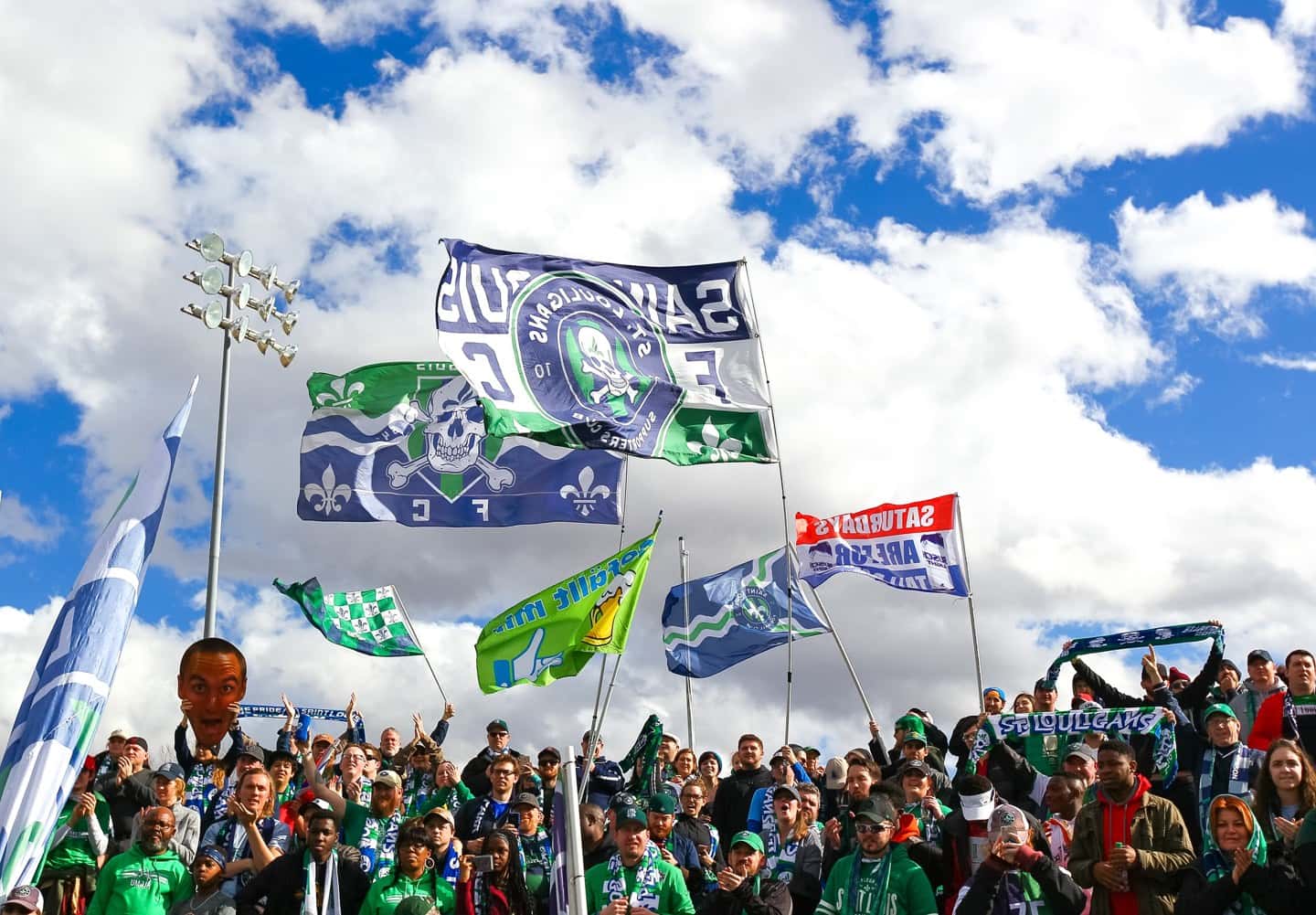 The Saint Louligan supporters group out in force

He deserved his goal. But he didn’t point to his number or spread his arms wide. He didn’t call attention to himself. No way. He ran to the fans like a man desperate to share the magical moment. To share a bit of this historic run with the fans, those Saint Louligans, behind the goal. The moment was electric and for Fink, who remembers the bad times. Those fans stuck with Saint Louis FC in their three seasons when they struggled to find their footing as a club and failed to reach the USL play-offs for three seasons straight. “These fans. They’ve been here through the thick and the thin,” said a grateful Fink. Again he passes the praise on; he deflects his own huge part in it. “We had really bad times and really good times and these fans always stuck by us; it gives us that extra pride when you’re tired and it’s late in the game. They help you keep pushing.”

Those fans behind the goal carry special banners to every Open Cup game. Each has the name of an old Saint Louis soccer team – all lost now to the sands of time – that won the Open Cup in the old days. Stix Baer & Fuller, Kutis, and Simpkins-Ford are there with Saint Louis FC on their charge for history. The Ben Millers and Scullin Steel, the first winners from the city in 1920, are there too - all the winners from that eastern corner of Missouri that hugs the Mississippi River. Saint Louis FC, Sam Fink, Guy Abend, Russel Cicerone and Kadeem Dacres are all a part of that now. They’re a link in a chain. “I wasn’t aware of all the Open Cup history in Saint Louis until I got here,” said Fink who speaks often of his pride in returning to his hometown team after a season away in Oklahoma City. “But the fans they all talk about it here – the rich history with the National Team and the Open Cup. It’s amazing to be adding to that now, here, in 2019.” 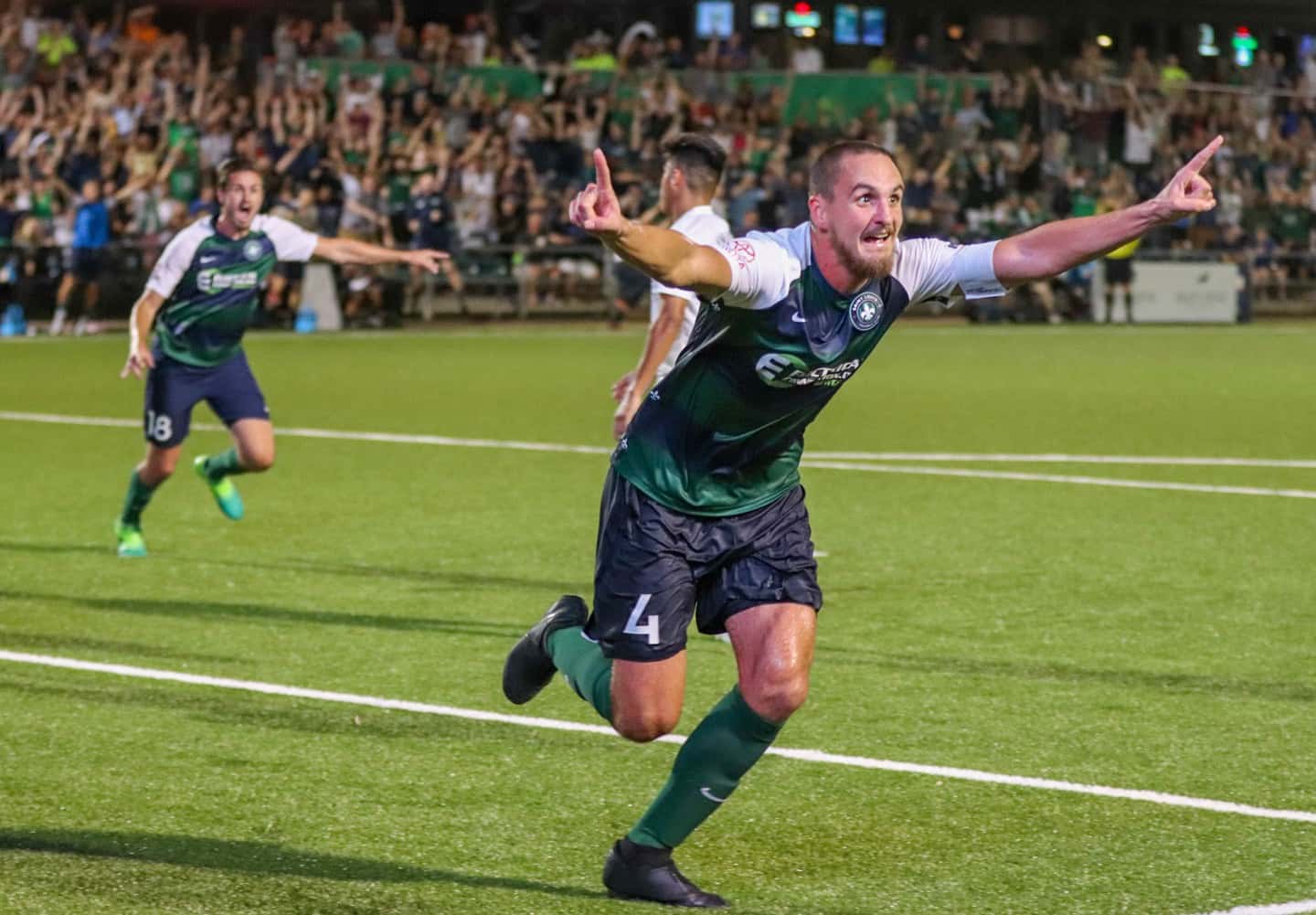 They’ve beaten Chicago Fire and FC Cincinnati – both of Major League Soccer. These alone are huge achievements for Saint Louis FC. Next they face a bigger one: a game on the road in Georgia against Atlanta United, the reigning MLS champions. Talk to Sam Fink about it and he’ll turn his attention not to the hugeness of the task or the weight of the opportunity but rather to the readiness of the troops, his Saint Louis FC soccer family.

“For the team from the lower division, these types of games are a way to show what you can do against teams from the top,” said Fink, strong and sturdy and steeped in the honest traditions of a century-plus of soccer in his native city. “That underdog is just going to push and push and keep coming at you no matter what. It’s a chance to prove something.” 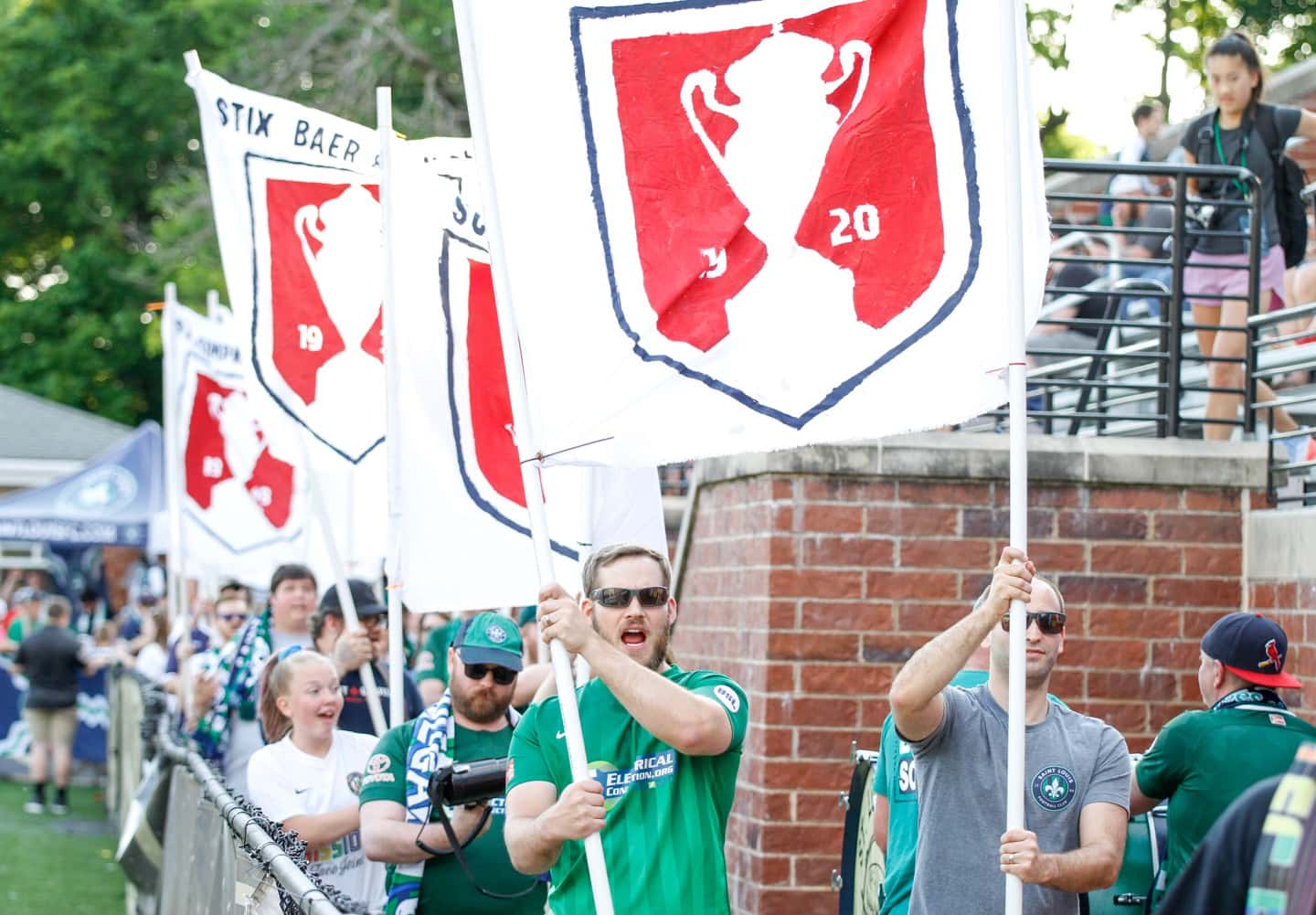 The Saint Louis FC fans with their Open Cup banners

Saint Louis FC and their captain have nothing to prove. Their run to the Quarterfinal has helped electrify the 106th U.S. Open Cup, reviving nostalgic echoes of the city’s old glory days of the 1920s through the 1950s. Saying that, they’re not going to Atlanta to bask in past achievements. It’s not like that here. There’s a job to do. And SLFC doesn’t shirk.

“This is a team where everyone fights for each other. They do things for the greater good,” said a proud Coach Pulis of his team, well-rounded, devoid of nationally recognized stars and full of fight. It’s a feeling Sam Fink, wearing the armband, knows well: “Our greatest strength is the team itself,” he said, putting extra stress on the word, pronouncing it with a hushed reverence. “Our greatest strength is our commitment to each other.”

Like it or not, Fink and his teammates are part of something bigger now. Bill Eppy is with them, if only from his house, with its basement full of trophies, out by the lake where he’s modest about his old glories. Saint Louis FC are now the tip of a spear going back a hundred years in the Open Cup. And kind old Ghosts like Borghi and Keough and Charlie ‘Gloves’ Colombo and ‘Pee-Wee’ Wallace and Ruben Mendoza will be with them as they push to take just one more step toward immortality. “This is a team that goes to battle together,” said Fink, deep emotion in his raw leader’s voice. “We’ve suffered together and we’ve pushed through – these guys, my teammates, they surprise me every single day.” 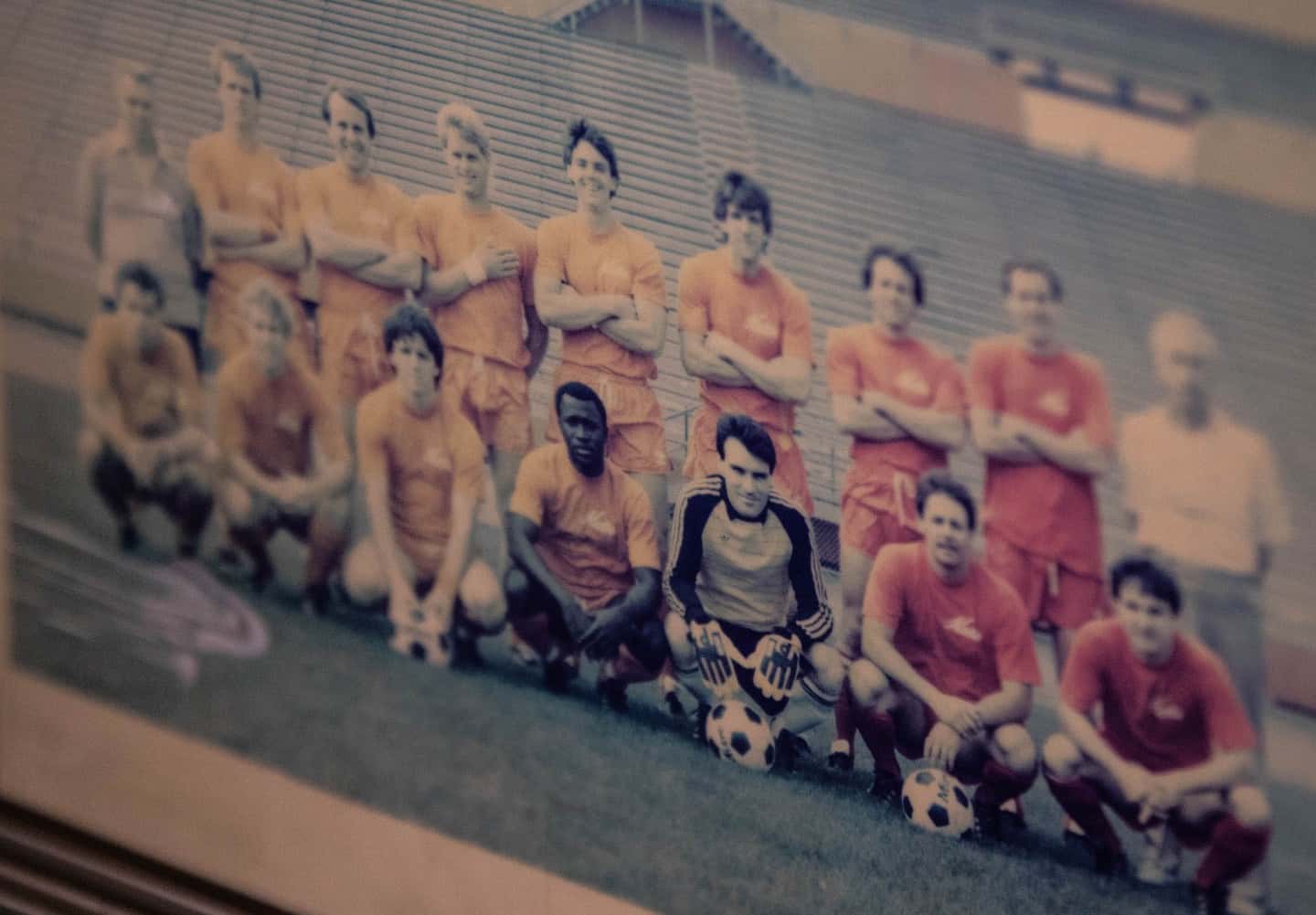 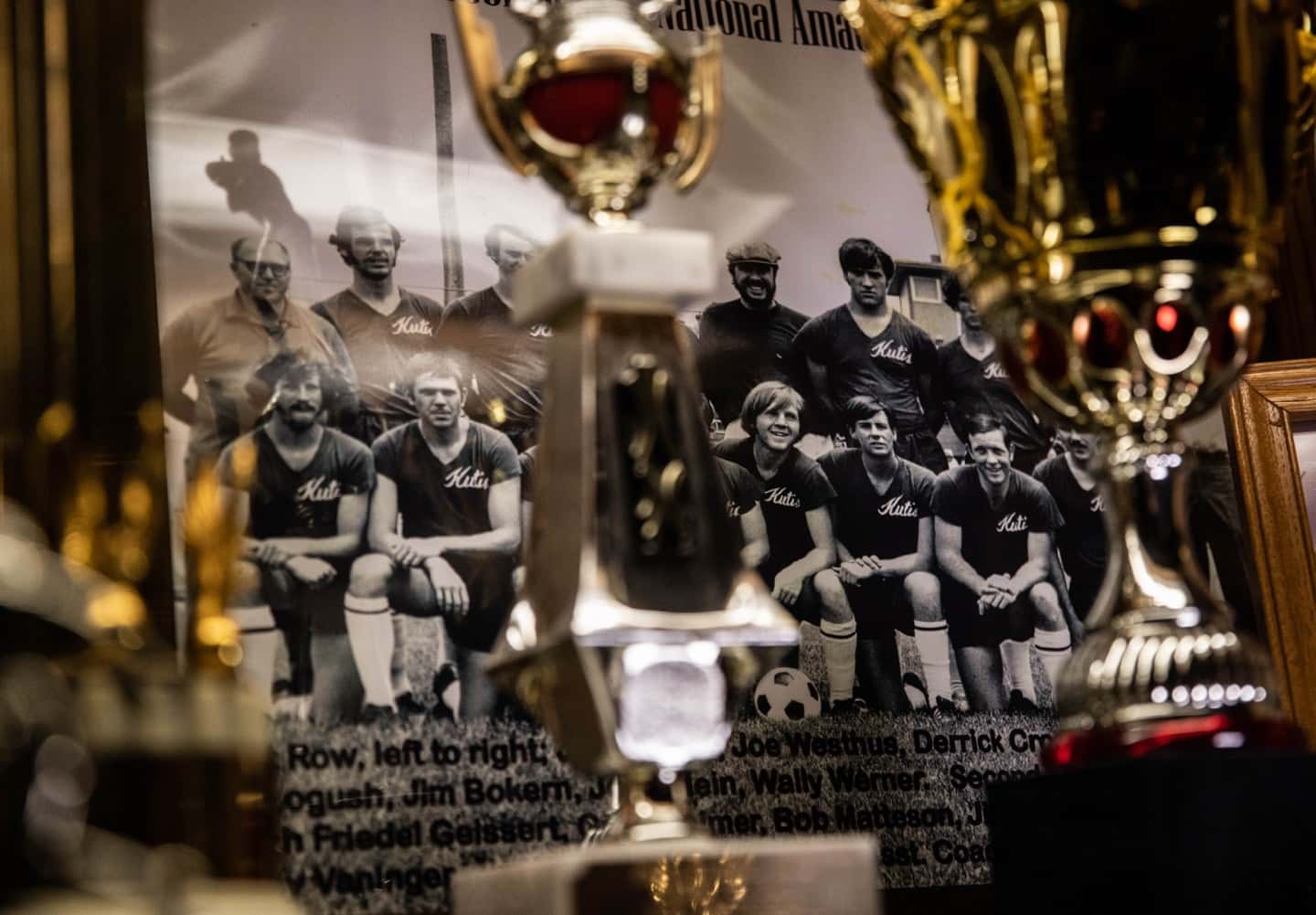 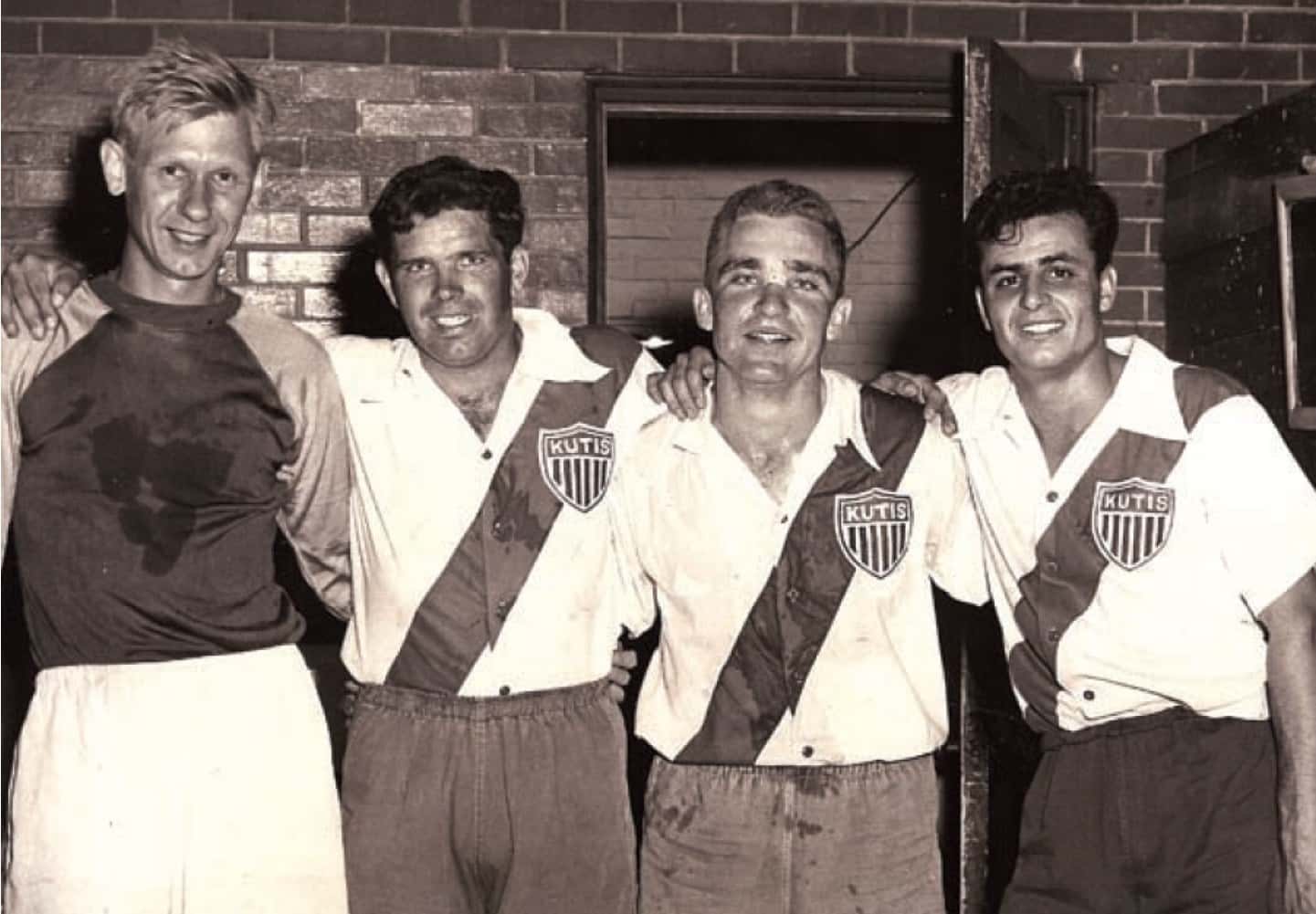