Heading into his first domestic Cup decider outside his native Netherlands, Atlanta United boss Frank De Boer’s fortunes are even with two cups won as a player and two lost as a manager.
Jonah Fontela August 15 2019
Open Cup
Frank de Boer is a legend in his native Netherlands. Raised from a pup in Ajax’s fabled dream factory, the center-back went on to win five titles for the club and claim an electrifying UEFA Champions League crown in 1995. With Spanish giants Barcelona, he won a La Liga title while amassing more than 100 caps with the Dutch national team. In his 30 years at the top levels of the game, he’s right down the middle at 50 percent when it comes to domestic cup victories – winning two as a player and losing two as a coach. A rubber match of sorts is set for August 27, when the 49-year-old coach leads Atlanta United into a first Lamar Hunt U.S. Open Cup Final against fellow first-timers Minnesota United at Mercedes-Benz Stadium in Atlanta (7:45 p.m. ET; ESPN+).
De Boer’s first taste of a Dutch (KNVB) Cup final came in May of 1993 when a star-studded Ajax lined up against second-division Cinderellas Heerenveen at the De Kuip Stadium in Rotterdam. The 6-2 win was extra sweet for De Boer and his Amsterdam side as it came at the home of age-old archrivals Feyenoord, who won that year’s Eredivisie league title while Ajax only managed third.

“Cup final day in Holland is like a national holiday. People turn up and the whole country is focused on it,” said De Boer, who won the Champions League two years later with largely the same Ajax team. “It always seems to bring out the best of Dutch football.”
The 1993 Final was no picnic for Heerenveen, who looked like making a game of it when Eric Regtop equalized a seventh-minute opener from Edgar Davids, still so young he didn’t yet have his trademark goggles or dreadlocks. De Boer, then just 22 and adjusting to his new role at center-back after starting life as a left back, was a beat late with his tackle and allowed the 20-yard snapshot that led to the leveler. But the bottom fell out for Heerenveen and that Ajax team full of legends like Dennis Bergkamp, Marc Overmars, Frank Rijkaard and Clarence Seedorf stepped hard on the gas. Louis van Gaal’s men celebrated the rout amid the smoke bombs of a raucous and capacity De Kuip crowd of over 45,000. 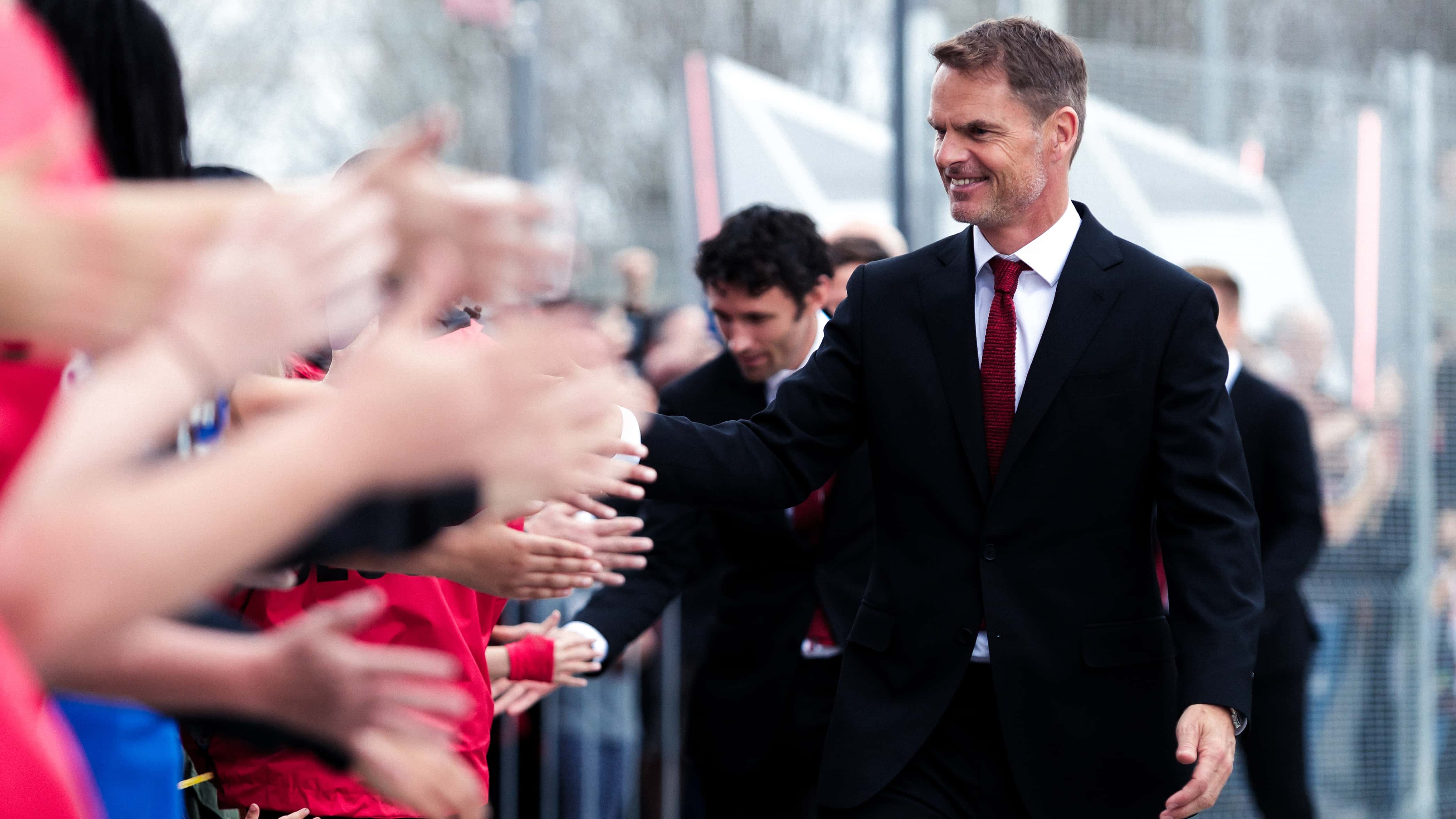 Frank de Boer has a chance to guide Atlanta United to a first Open Cup crown this year.

The 1993 trophy ceremony was noteworthy for the lasting image of Ajax’s players – including captain Danny Blind – lifting the old trophy while wearing Heerenveen shirts (the players swapped before the post-game festivities had begun).

De Boer returned to the KNVB Cup final five years later (in 1998) with arguably one of the best Ajax sides since the legendary days of Johan Cruyff in the 1970s. “We were champions in the league by February,” De Boer remembered of that season, playing alongside Michael Laudrup, Sunday Oliseh and Jari Litmanen. “But we had the chance to play against our big rivals at the time, PSV [Eindhoven] at the home of another huge rival, Feyenoord of Rotterdam. There was a lot of anticipation for the cup final and the atmosphere was electric as we tried for the Double.”

Nigerian sensation Tijani Babangida opened the scoring in the 5-0 blowout and the day was a celebration of Ajax’s dominance. “We ended up winning big in the home of our big rivals. It was the only year I won a Double as a player and it stays with me to today.”

That legendary Ajax side was soon dismantled and sold off, piece by piece, to Europe’s bigger names. De Boer had left for Spanish side Barcelona (along with his twin brother and right-winger Ronald) a few months before the Amsterdam giants beat Fortuna Sittard 2-0 to win the 1999 Final. 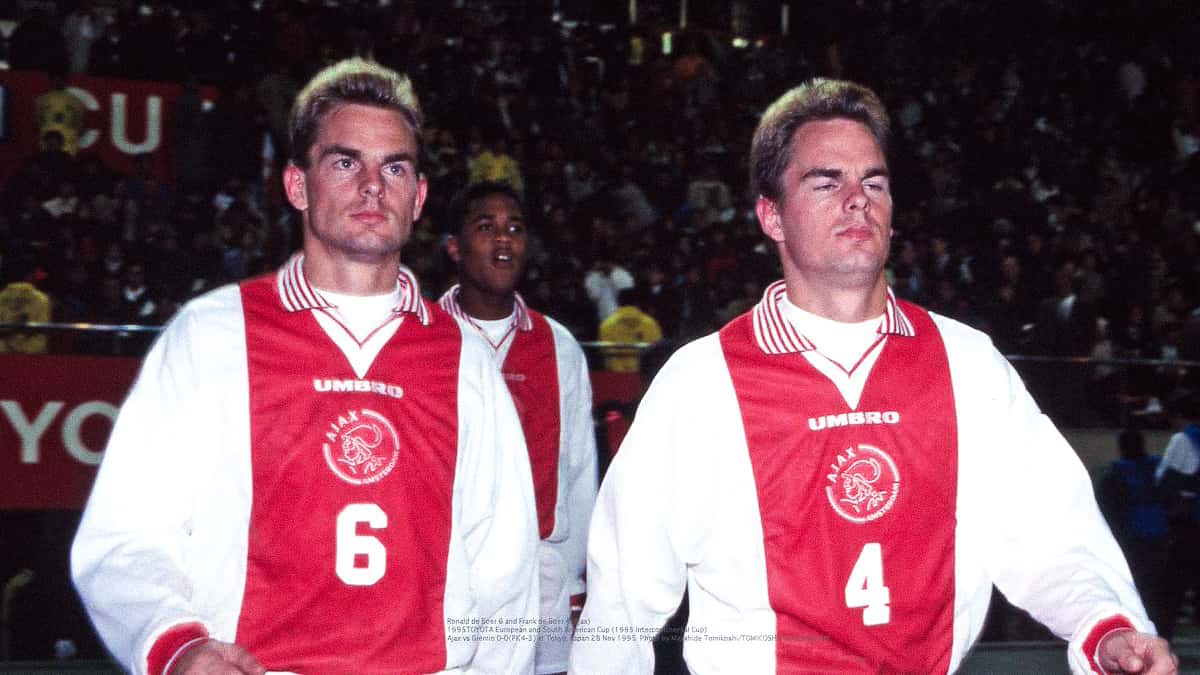 Frank (left) and his twin Ronald (right) during their Ajax days

In a playing career that spanned nearly 20 years, 1993 and 1998 hold a special place for De Boer as the only times he lifted a domestic cup trophy. “Cups are special,” he told usopencup.com. “The energy is different in every cup game – anywhere in the world. It’s simple: You can’t repair it if you lose. If you lose in the league, OK, you can repair it down the road in the next game or the game after that. In the cup, you lose and it’s all over. There’s no tomorrow.”

Tougher on the Touchline

Since swapping studs for a clipboard, De Boer has been involved in two more Dutch Cup finals. Both were losses, but, according to the first-year MLS boss, important lessons were learned along the way.

“You don’t forget losing in Finals, I can tell you that,” said De Boer, whose Atlanta United are current MLS Cup holders and recently lifted the inaugural Campeones Cup for good measure. “Losing in cup finals is something that stays with you as long as you live.”

He reached the Final with Ajax in 2011 in his first year as manager (taking over for the sacked Martin Jol in December). He was at the helm of a powerful team with the likes of Belgians Toby Alderweireld and Jan Vertonghen marshaling the defense and Christian Eriksen pulling strings in midfield. The tension ahead of the Final was palpable as their opponent on the day, FC Twente, were one point ahead of Ajax in the league table and the two would play four days after the cup final to decide that year’s Eredivisie champion. “It was like having two cup finals in the space of four days,” said DeBoer, whose side lost that cup final 3-2. “Twente were favorites in both games because they just played the best that year.” 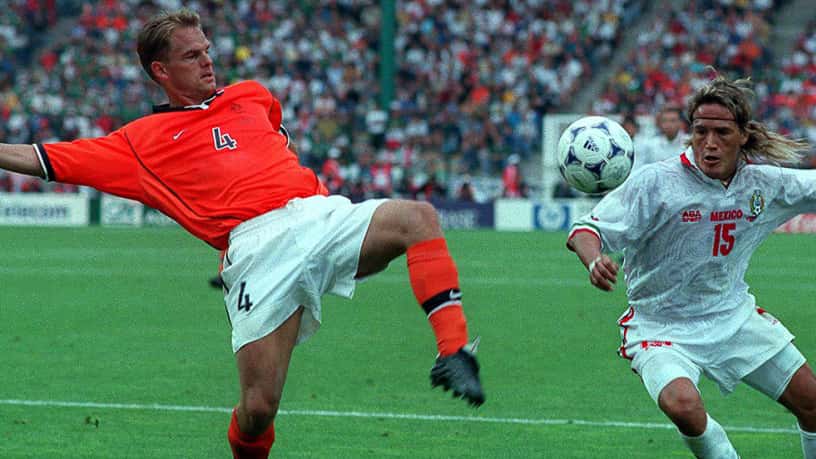 “But I used that loss to motivate my team for the final league game – they took confidence from it for how we played,” said De Boer of the slim loss in extra-time. “It was important inspiration because we hadn’t won a title in seven years. We ended up winning the league with a win on the day [3-1], four days after losing the cup final.

Two years later, in 2014, De Boer was back at the packed De Kuip and the outlook was positive early as his Ajax went up 1-0 through Ricardo van Rhijn. But the lead was a false dawn. “We felt good about that one early on,” De Boer said with a wry chuckle. “But we went on to lose 6-1 and so you can say that it didn’t end well.”

Looking ahead to a fifth cup final – and his first outside of his native Netherlands – De Boer is cautious but confident. “It’s impossible not to think about winning a trophy. We are still a very young club and we don’t have that much history. In that history, we have an MLS title and to play in another Final this year is great for this club,” added De Boer, hoping to tilt his balanced record in Cup play back into the positive column. “And playing a final at home is a special thing. Fans and players had that feeling last year [when Atlanta beat Portland Timbers to lift MLS Cup] and we’d like to bring it back again with the Open Cup.”