WASHINGTON, D.C. (Oct. 11, 2019) – The U.S. Men’s National Team galloped to a 7-0 victory against Cuba in front of 13,784 fans at Audi Field in the USA’s inaugural Concacaf Nations League match. Weston McKennie recorded the USMNT’s fastest hat trick from the start of a match just 13 minutes in and Jordan Morris scored a goal and provided a record-tying three assists to pace the side to its first three points in the competition.

Cuba and Canada, the USA’s next opponent, began Nations League play last month with The Reds taking both games: 6-0 in Toronto and 1-0 in the Cayman Islands, where Cuba is hosting its home CNL matches. The USA will have the opportunity to join Canada atop the Group A table when it travels to Toronto for its next Nations League match on Tuesday, Oct. 15. 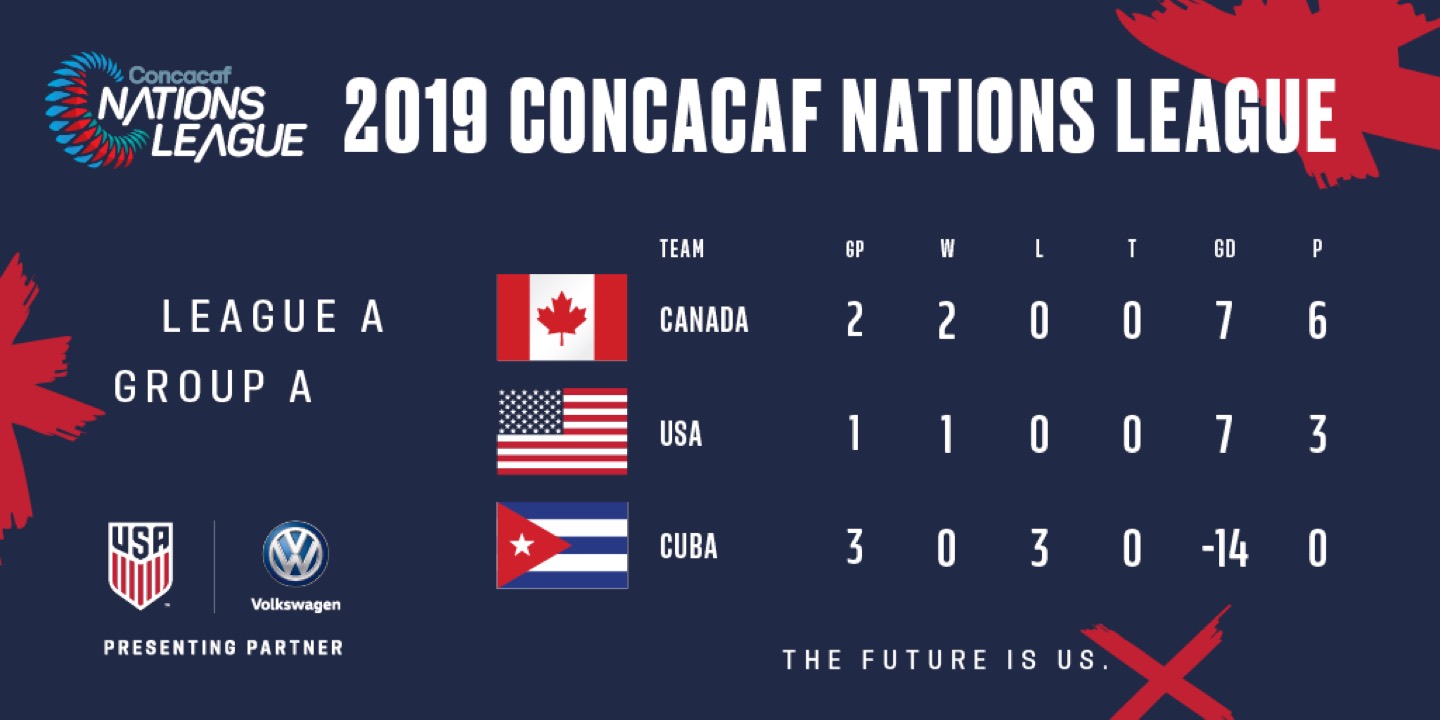 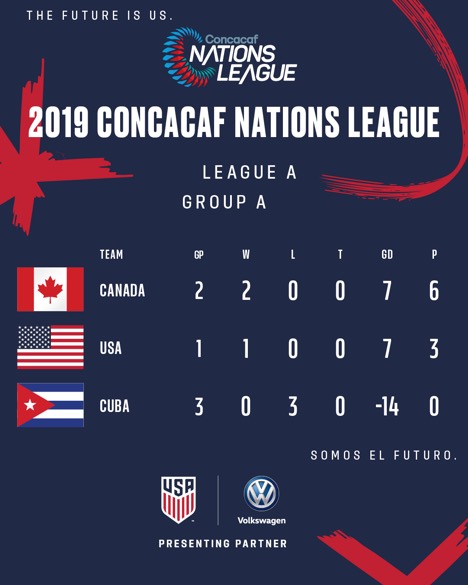 
The USA wasted no time taking control of the game as McKennie scored the second fastest goal in modern USMNT history, netting the game’s opener just 32 seconds into the contest. He added a second four minutes later on a second-consecutive assist from Morris before turning provider in the ninth minute for Morris’ second goal in as many games.

With the USA up 3-0 inside the opening 10 minutes, McKennie capped off the earliest hat trick in team history when he finished off Reggie Cannon’s cross in the 13th minute. The Schalke midfielder continued his Budweiser Man of the Match performance by setting up Morris with a creative back heel, but the Seattle Sounders FC forward’s shot was saved before hitting a recovering defender in the face and bouncing into the goal for a 5-0 U.S. advantage.

Sargent then added to the USMNT record books with his first goal of 2019, curling home a Morris assist in the 40th minute to put the USA up 6-0 before the break. The six goals set the mark as the most that the USA has scored in a single half in the modern era.

McKennie and Morris were withdrawn at half time, replaced by Paul Arriola and Tyler Boyd, respectively, as the USA continued to work on its attacking patterns. One such attack led to referee Jose Raul Torres Rivera awarding the U.S. a penalty kick in the 62nd minute when he spotted a handball in the box. Pulisic, who captained the team on the night, gathered the ball and assuredly dispatched the spot kick to cap the scoring for the USA and his evening as he was subbed off for Sebastian Lletget shortly thereafter.

The U.S. continued to create chances over the final 20 minutes – in particular, a Cristian Roldan drive drew an impressive save from Cuba goalkeeper Nelson Johnston – but did not add to the already imposing 7-0 score that already has the team tied on goal differential with its next opponent, Canada.

Next on the Schedule: The USA will travel north to BMO Field in Toronto for a showdown with Concacaf Nations League Group A leader Canada on Tuesday, Oct. 15. The match in Canada’s largest city will be broadcast beginning at 7:30 p.m. ET on ESPN2, UniMás and TUDN. The USMNT will face Canada and Cuba in Nation’s League play again next month to complete Group A play.
Social: Twitter, Instagram (@USMNT) and Facebook

USA – Weston McKennie (Jordan Morris), 1st minute: The USA took the opening kickoff, passed the ball around for a spell before attacking up the right sideline through Reggie Cannon and Jordan Morris, whose smart run got him behind the Cuba defense where he clipped a cross back toward the penalty spot. The ball deflected to Weston McKennie at the back left post and he took one touch to settle the ball before drilling it into the lower left corner for the second fastest goal in MNT history. USA 1, CUB 0 [WATCH]

USA – Weston McKennie (Jordan Morris), 5th minute: The USMNT’s second goal was a carbon copy of its first as Cannon once again played Morris in behind the Cuba defense where he lifted a cross toward the back left post. McKennie again timed his run well and one-timed the ball into the center of the net. USA 2, CUB 0 [WATCH]

USA – Jordan Morris (Weston McKennie), 9th minute: McKennie turned provider on the USA’s third goal. This time the USA cut through the center of the Cuba defense with Josh Sargent glancing the ball past an onrushing defender and into the path of McKennie, who took a touch, spun to his right and played Morris into the left side of the box. Morris took one touch to corral the pass before picking out the lower left corner from close range. USA 3, CUB 0 [WATCH]

USA – Weston McKennie (Reggie Cannon), 13th minute: McKennie got his hat trick in familiar fashion, as the USA punished Cuba from the right sideline yet again. This time, Morris ran down a Jackson Yueill pass and flicked it into the path of the overlapping Cannon. The U.S. right back smashed a cross through the goal mouth where McKennie was on hand to volley the ball into the back of the net. USA 4, CUB 0 [WATCH]

USA – Darío Ramos (own goal), 37th minute: Yueill initiated the sequence with a pass from midfield to McKennie, who glanced over his shoulder to spot the run of Morris before backheeling a creative flick between defenders into the box for Morris. With one goal to his name already, Morris tried to lift a shot over Johnston into the lower right corner, but the ball ricocheted off the goalkeeper, hit recovering Cuba defender Darío Ramos in the face and bounced into the goal. USA 5, CUB 0 [WATCH]

USA – Josh Sargent (Jordan Morris), 40th minute: For a third consecutive attack, Yueill sparked the USA, sending a ball over the Cuba defense that Morris did well to bring down and carry into the box. With a defender closing in, Morris played the ball back for the trailing Sargent, who wrapped his left foot around the ball to curl a low drive into the bottom left corner. USA 6, CUB 0 [WATCH]

USA – Christian Pulisic (penalty kick), 62nd minute: Sargent suffered an off the ball foul in the box as the USA maneuvered to attack the goal. The referee spotted the infraction and awarded the penalty kick. Christian Pulisic gathered the ball, planted it on the penalty mark and dooly dispatched the spot kick into the top shelf of the goal. USA 7, CUB 0 [WATCH] FINAL

CUB – Nelson Johnston, 18th minute: McKennie brought down a long ball with a Velcro touch and ripped a shot towards the back right post that Cuba goalkeeper Nelson Johnston was able to get a strong hand to, tipping it around the post.

CUB – Nelson Johnston, 33rd minute: McKennie was played into the left side of the Cuba box and cut past a defender toward the middle of the area before unleashing a low shot that Johnston was able to deflect over the bar with a kick save.

CUB – Nelson Johnston, 42nd minute: Moments after causing Cuba’s own goal, Morris was played into the box where he snapped a one-time blast on goal that Johnston did well to get an arm toin order to tip the ball around the left post.

CUB – Nelson Johnston, 79th minute: Cristian Roldan battled with a Cuba defender at the top of the box. Winning possession on the right side of the area, he cracked a shot toward the left side of goal that was deflected by a defender before drawing a leaping, one-handed save from Johnston.