Nominees Set for 2019 U.S. Soccer Male and Female Player of the Year Awards

CHICAGO (Nov. 26, 2019) – U.S. Soccer has announced the nominees for the 2019 U.S. Soccer Male and Female Player of the Year awards. This year’s field features midfielders Julie Ertz, Rose Lavelle and Carli Lloyd, forwards Alex Morgan and Megan Rapinoe and goalkeeper Alyssa Naeher for their exploits with the USWNT and their clubs, while defenders Aaron Long and Tim Ream, midfielders Weston McKennie and Christian Pulisic, and forwards Jordan Morris and Gyasi Zardes are in the running for their achievements with club and country.

Voting for the awards starts today and closes on Dec. 6, 2019 at 11:59 p.m. ET. The winners will be announced during the second week of December.

All six Female nominees played significant roles for the USA during a 2019 that saw the team win its fourth – and second consecutive – World Cup title after a spectacular and dominant performance in France this summer. 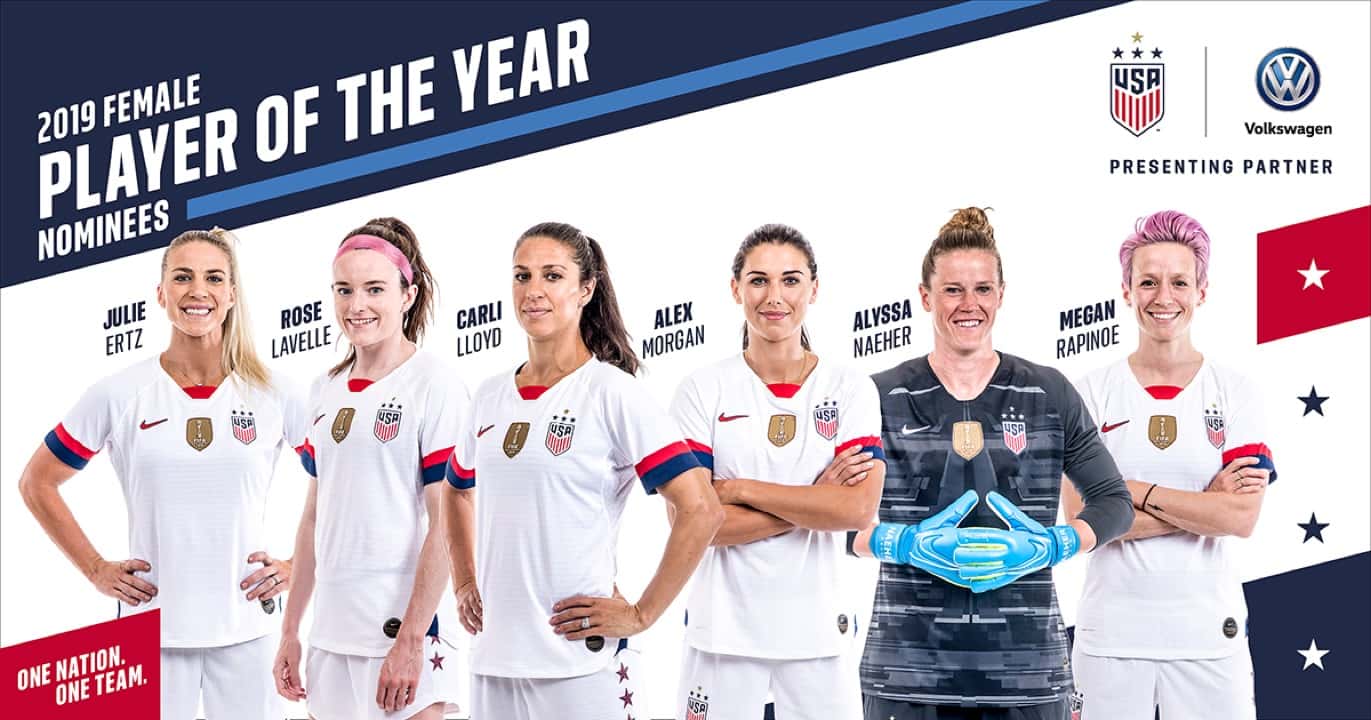 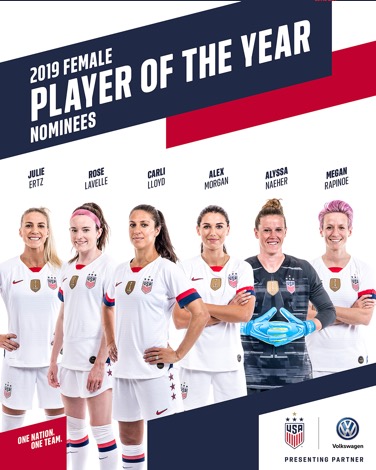 Ertz finished 2019 with 95 career caps and played 1,755 minutes, third-most on the team. Lavelle had a breakout year, scoring what was perhaps the most memorable goal the year in the World Cup final vs. the Netherlands. Lloyd finished 2019 with 16 goals, most on the team, and the third-most she’s ever scored in a calendar year. Morgan scored six goals at the World Cup, including the game-winner vs. England in the Semifinal, and won the Silver Boot in France. Also, in that Semifinal match, Naeher made a heart-stopping penalty kick save to preserve the 2-1 USA lead and help the team reach the Final. Finally, Rapinoe had the summer of her life, skyrocketing to world-wide fame after winning both the tournament’s Golden Ball as the MVP and the Golden Boot as the top scorer following the USA’s World Cup triumph.

In the first year under head coach Gregg Berhalter, the six Male nominees made significant contributions at the international level ahead of the start of FIFA World Cup Qualifying that begins in September 2020. 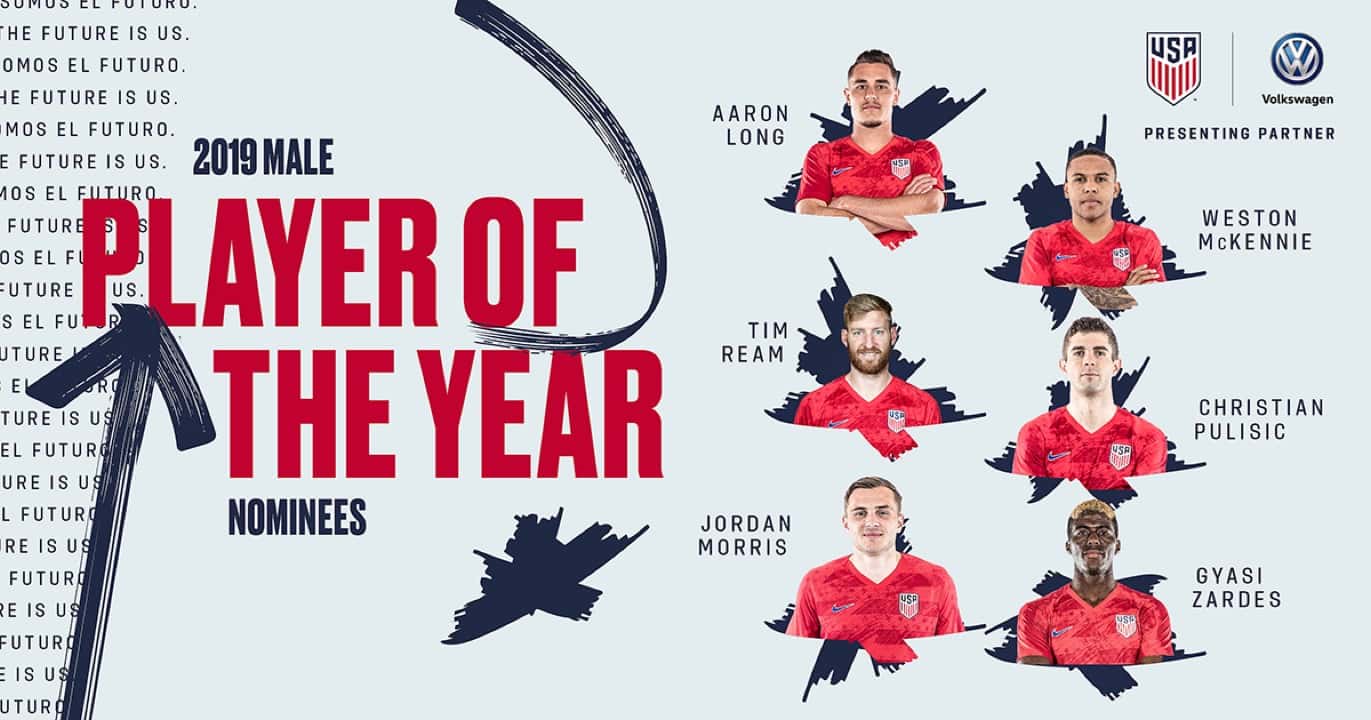 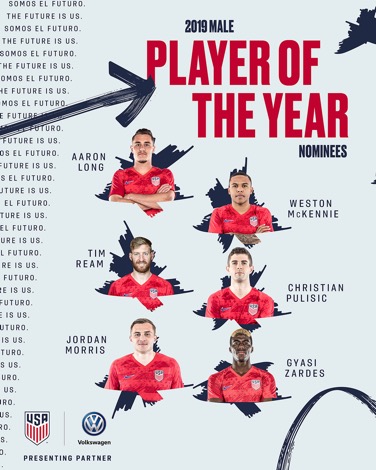 Aaron Long tied for the most starts (14) in 2019, recording three goals and one assist. His pair of tallies against Trinidad & Tobago in the Gold Cup marked the first multiple-goal game for a defender in USMNT history. Showing the capability of playing at both left back and center back, Tim Ream also collected 14 starts, serving as captain six times this year with the team compiling a 4-1-1 record with him wearing the armband. Jordan Morris was on fire as he completed a successful year for club and country. With five goals and four assists, the winger was part of nine of the 16 goals scored in the USMNT’s last five matches and finished as the leading scorer (4) in Concacaf Nations League A group play.

Weston McKennie tallied five goals and two assists in 2019, registering the fastest hat trick from the start of a game in USMNT history, scoring goals in the first, ninth and 13th minutes in the 7-0 win against Cuba. McKennie’s goal 32 seconds into the match is the second fastest in USMNT history behind only Clint Dempsey’s strike against Ghana at the 2014 FIFA World Cup. Christian Pulisic once again proved to be quite prolific, recording five goals and three assists in 11 appearances. He earned ussoccer.com Man of the Match honors a team-leading four times, including twice during the run to the 2019 Gold Cup final. Gyasi Zardes led all U.S. scorers with six goals, doubling his career total to date. Good things came in pairs for the Columbus Crew SC striker as he was twice named ussoccer.com Man of the Match, posted two multi-goal games and notched two game-winning goals, including in the 1-0 shutout win against Ecuador in March and the crucial 4-1 Nations League win against Canada in Orlando.

Votes for U.S. Soccer Player of the Year awards are collected from respective National Team coaches, National Team players who have earned a cap in 2019, members of the U.S. Soccer Board of Directors, U.S. Soccer Athletes’ Council, National Women’s Soccer League head coaches for the USWNT and American soccer league (MLS and USL) head coaches for the USMNT, select media members and former players and administrators. In addition, select college coaches vote for the USWNT award.

The U.S. Soccer Male Player of the Year has been awarded since 1984 when Rick Davis won it. Current U.S. Soccer Sporting Director Earnie Stewart won it in 2001. Landon Donovan holds the record for most awards, winning it four times, while Clint Dempsey won it on three occasions. Then eighteen-year-old Christian Pulisic became the youngest player to win the award in 2017.