The 1919 U.S. Open Cup carried on to see Bethlehem Steel crowned champions for a fourth time despite a global pandemic and a raging world war.
Frank Dell’ApaApril 22 2020
Open Cup

Editor’s Note: The Covid-19 Pandemic has caused profound uncertainty all over the world – and our smaller world of soccer in the U.S. is not exempt. Although the 2020 Lamar Hunt U.S. Open Cup is currently postponed, the Federation continues to monitor the situation and is keeping in close contact with league and team officials in the sincere hope that the country’s longest-running soccer competition might find a way forward in this its 107th year.

Until such time as a decision is made, read about how the Open Cup (National Challenge Cup then) went ahead in 1919 in the face of both global pandemic and world war.

Since 1914, the Lamar Hunt U.S. Open Cup has annually crowned a champion, playing to a conclusion through labor disputes, media antagonism and apathy, natural disasters, pandemics and wars – both soccer wars and world wars. But the competition’s greatest test of resiliency before this year’s Covid-19 outbreak was likely in 1918-19, when a combination of Spanish flu and World War I threatened to short-circuit the Cup before a ball could be kicked.

The Allies were advancing on the Western Front, and the “work or fight” law was enacted, decimating leagues and teams. On the home front, the Spanish flu was spreading, the height of the pandemic coinciding with the Open Cup’s scheduled openers.

Rocky Start to the Cup

Cup entries were down to 48 teams, six less than the previous year. And any chance of a rematch of the 1916-18 Final between reigning champion Bethlehem Steel and the Fall River Rovers (the Steelmen also won in 1916, the Rovers in 1917) disappeared as the Rovers disbanded after losing several players to military service.

The Challenge Cup committee announced the sixth annual Open Cup would kick off in October, and the timing could not have been worse. The Spanish flu had already hit hard, and October 1918 ushered in a second “deadly wave.”

If everyone seemed to be increasingly wary, there was good reason. “Flu struck so many victims without warning, at their work or on the street, that fear of disease became almost universal,” wrote Dorothy Ann Pettit in A Cruel Wind: America Experiences Pandemic Influenza, 1918-1920 A Social History. 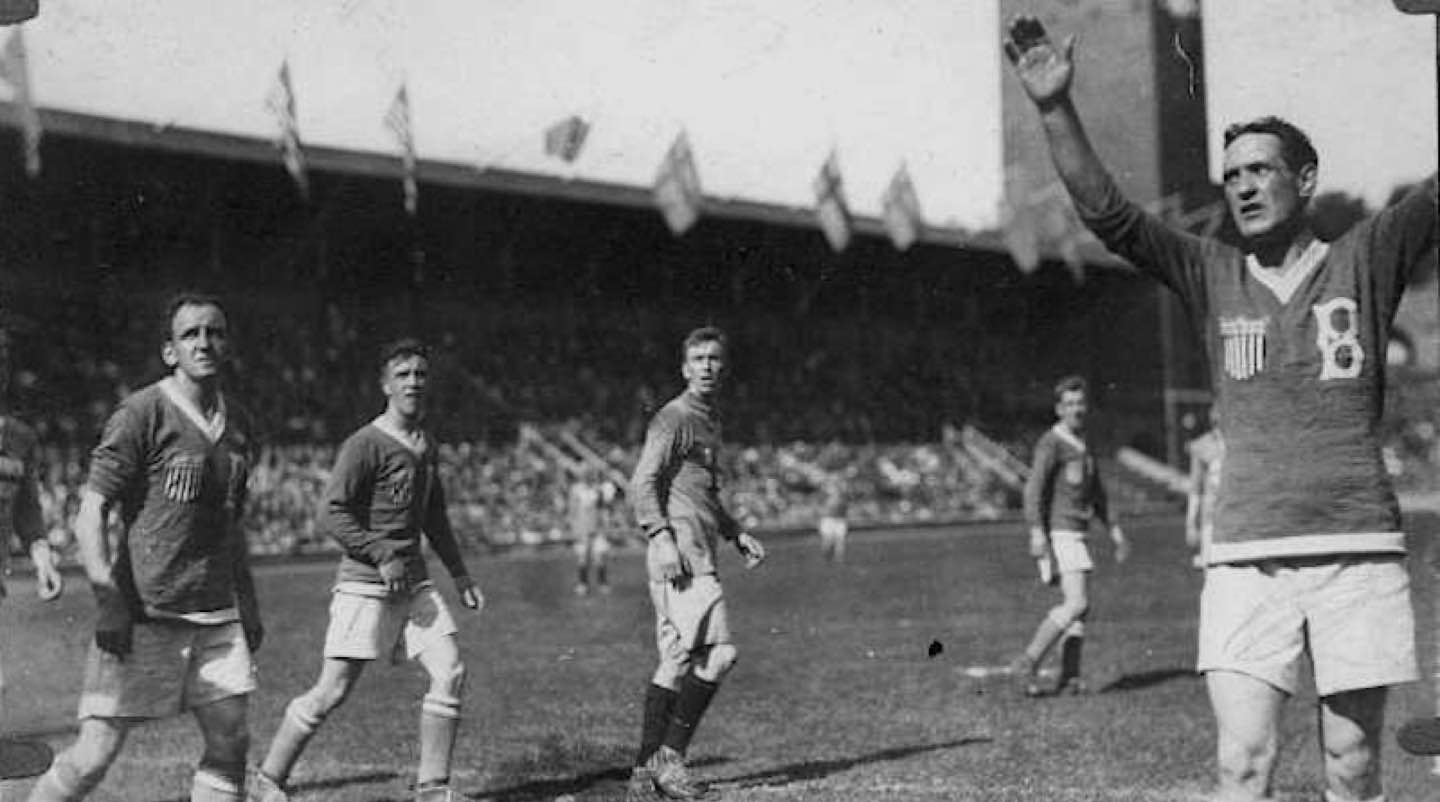 As the countdown to the Challenge Cup opener approached, at least two team officials fell victim to the pandemic: “soccer magnate” F.C. Wright of New Jersey’s Pusey & Jones and Merchant Ship FC assistant trainer Charles Turner, a former Philadelphia Wanderers player. Two active players were reported to have died: Fore River AFC forward Sandy Anderson and Paterson FC center-half Sam Bustard (though reports of the latter’s demise proved false as he recovered from the flu and was released from hospital).

Conscription and enlistment increased as the Allied campaign in France ramped up. Closer to home, troops were being sent to control unrest in the Caribbean and on the Mexican border.

War casualties included John H. Cartwright, a 1916 U.S. Open Cup Semifinalist with Pullman FC, who had been a member of the Canadian forces in France, and “Midwest star” John A. McBride of Topeka, Kan., according to the Moline (Ill.) Dispatch.

U.S. Soccer Federation honorary secretary Thomas Cahill noted in his annual report for 1918-19: “Hundreds of our players laid down their lives in foreign fields. Probably no other sport contributed as gloriously to the cause of freedom and righteousness.”

There had been discouraging signs in September, as the National Challenge Cup committee announced the opening of registration. The Spanish flu had dampened attendance for the final game of the 1918 World Series, contested before a slim crowd at Fenway Park of “not more than 15,000,” according to the Boston Globe, on Sept. 11. Two days later, the college football season was “knocked out by the War Department.” The city of Boston recorded 1,040 deaths from influenza and pneumonia in the last two weeks of September 1918. But Chicago and Philadelphia failed to heed warnings. On Sept. 22, 1918, the Philadelphia Evening Ledger noted: “The two big soccer football classics [U.S. Open Cup and American Football Association Challenge Cup] will be conducted as usual this season.”

Right about that time, the H1N1 virus was shifting into overdrive, partly resulting from large public gatherings such as Liberty Loan parades. Chicago recorded nearly 9,000 fatalities from Oct. 5 through Nov. 2. In Philadelphia from Sept. 29 to Nov. 2, there would be 12,162 victims “of the tandem maladies,” flu and pneumonia, according to
America’s Forgotten Pandemic: The Influenza of 1918 by Alfred W. Crosby.

Among the afflicted was Merchant Ship FC goalkeeper Harry Pearce, who also played second base for the Philadelphia Phillies. He would recover in time to play in a 1-0 First-Round Open Cup win over Hog Island AAFC, whose goalkeeper was his own brother, Alf.

But the situation abruptly changed. As rapidly as the infection rate had increased, it was headed for a let-up. And the tournament kicked off with four matches on Oct. 20, 1918. Remarkably, three of the games were staged in New York, though the flu-related death total had doubled (to 4,227) for the week. Only Philadelphia (4,597 in a week) exceeded that figure among U.S. cities. 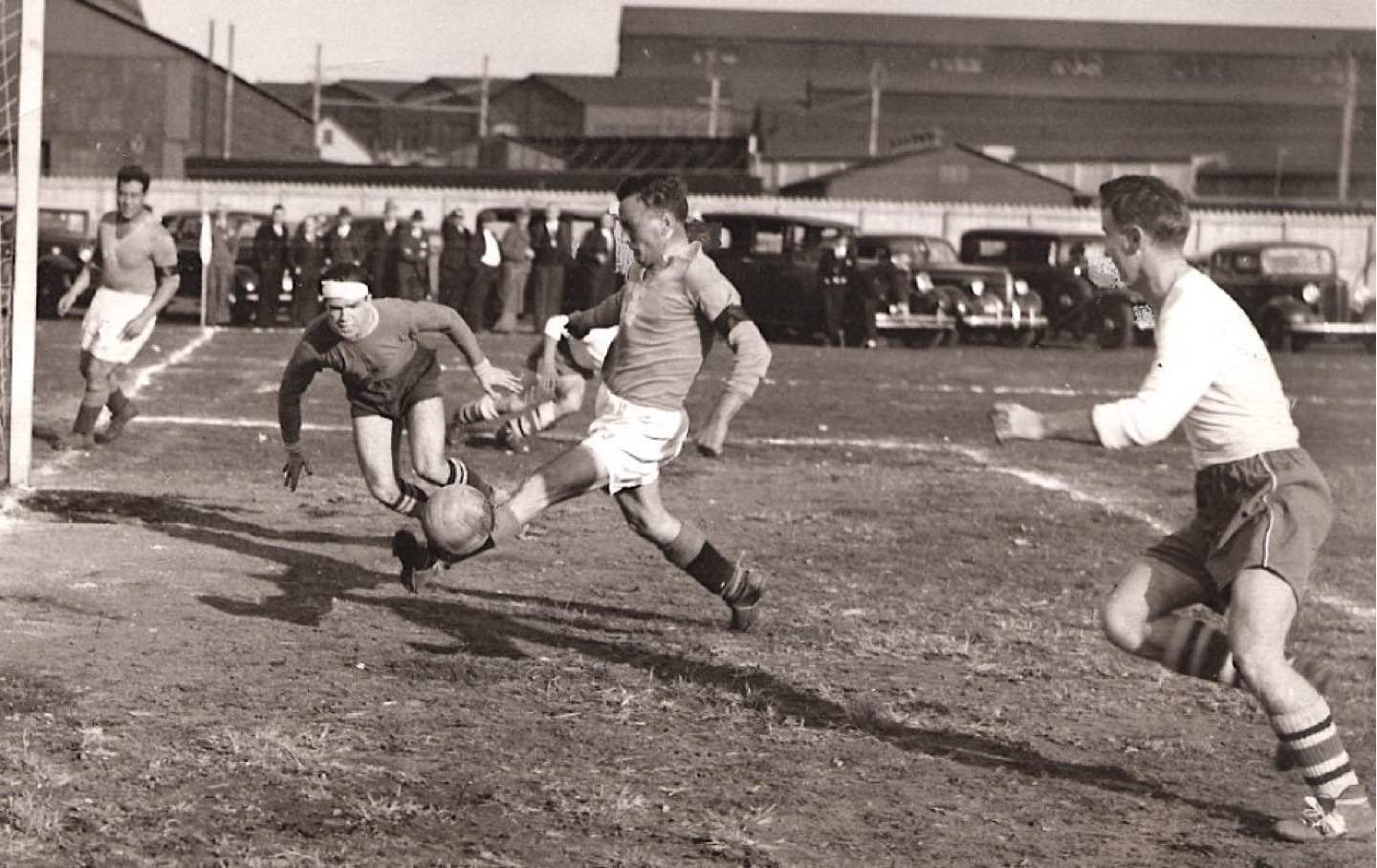 In Brooklyn, Morse Dry Dock blanked Standard Shipyard FC (4-0) at Hawthorne Field, making the strongest impression of the six contenders in the three New York area games. According to the Bridgeport Post: “The Morse Dry Dock soccer eleven, which includes five members of the famous Fall River Rovers, showed itself to be one of the most dangerous combinations in the vicinity …”

Despite the death toll, there did not seem much question about games going ahead in New York. Nor was it unusual for sports to be contested in times of epidemics and war, as authorities encouraged the staging of athletic activity to boost morale. The Committee on Public Information discouraged the dissemination of negative news, so there was a lack of reporting on the flu’s progress. 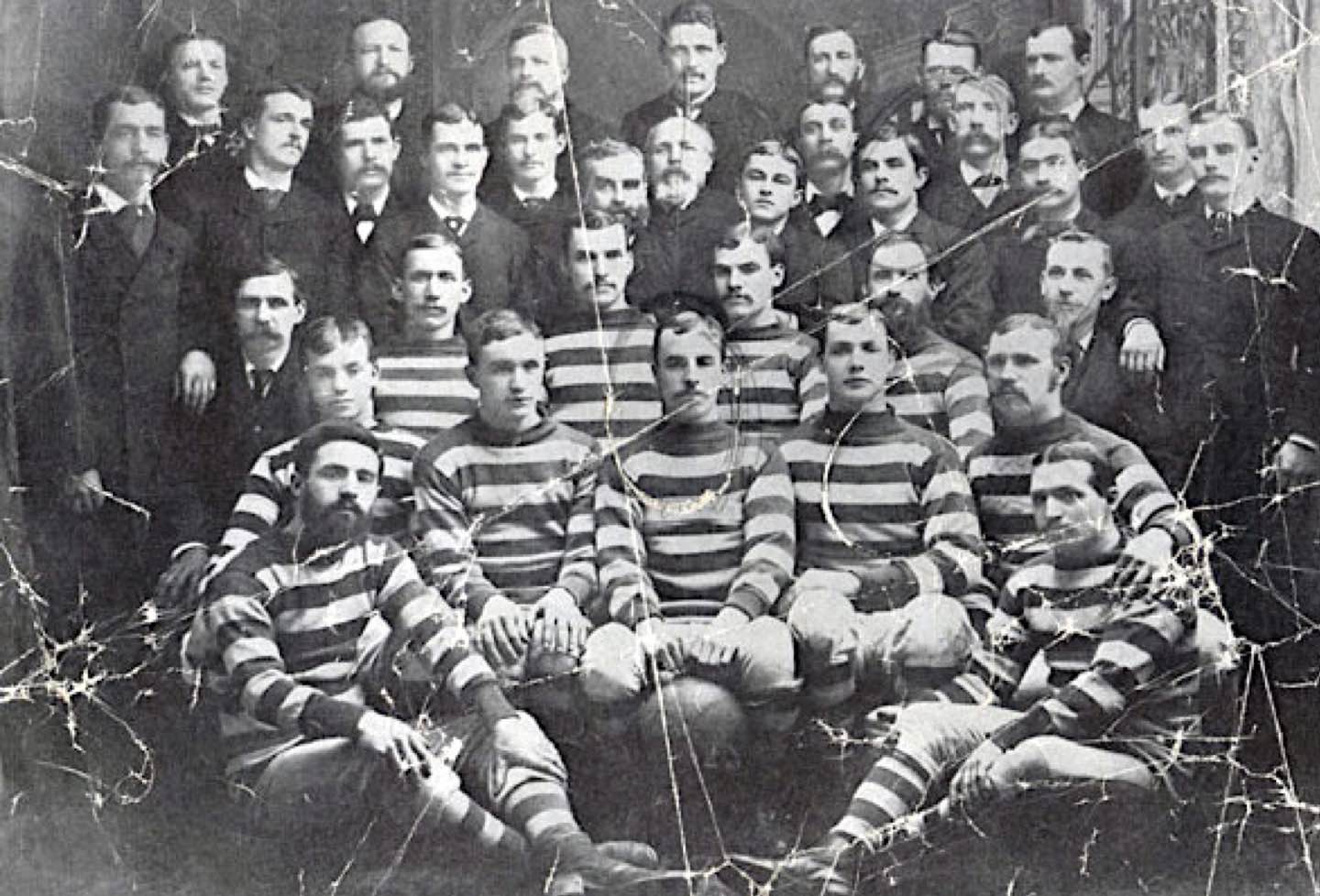 Though few seemed to realize it, the Open Cup had already played through the early stages of Spanish flu during the previous year’s tournament. Apparently, it was not considered extraordinary for Rovers captain Tommy Swords to be suffering from “the grip” days before the 1917-18 Final, as noted by the Fall River Daily Evening News. Also, three days before the championship game, nobody seemed to know the whereabouts of fullback Stoney LaPierre before it was announced he had been shipped out to France. Swords recovered but LaPierre missed the Rovers’ 5-2 loss on aggregate to Bethlehem Steel in a two-leg Final in May, 1918.

The virus’ progress had begun to slow in Boston, Chicago and Philadelphia, and the Open Cup went ahead in early November. Bethlehem Steel began their title defense with a 3-0 victory over New York Shipbuilding on Nov. 9. Chicago’s Bricklayers & Masons FC downed American Hungarian FC (3-1) on Nov. 10.

On the battlefront, an armistice was signed with Germany, hostilities ceasing on Nov. 11, 1918. But that would be too late for Homestead Steel Works and Pittsburgh FC, both withdrawing due to draft and enlistments, and the Fall River Rovers, disbanded before the competition.

The Rovers’ demise seemed to leave Bethlehem Steel a clear path to defend their title.

But some ex-Rovers decided to mount a challenge to the Steelmen by joining forces with Morse Dry Dock. At the start of the competition, the “Morsemen” lineup included goalkeeper Chick Albion, Fred Beardsworth, Frank Booth, Charles Burns, plus goal-scoring ace Sinkey Sullivan, who had competed for the Rovers in the 1917-18 Final. 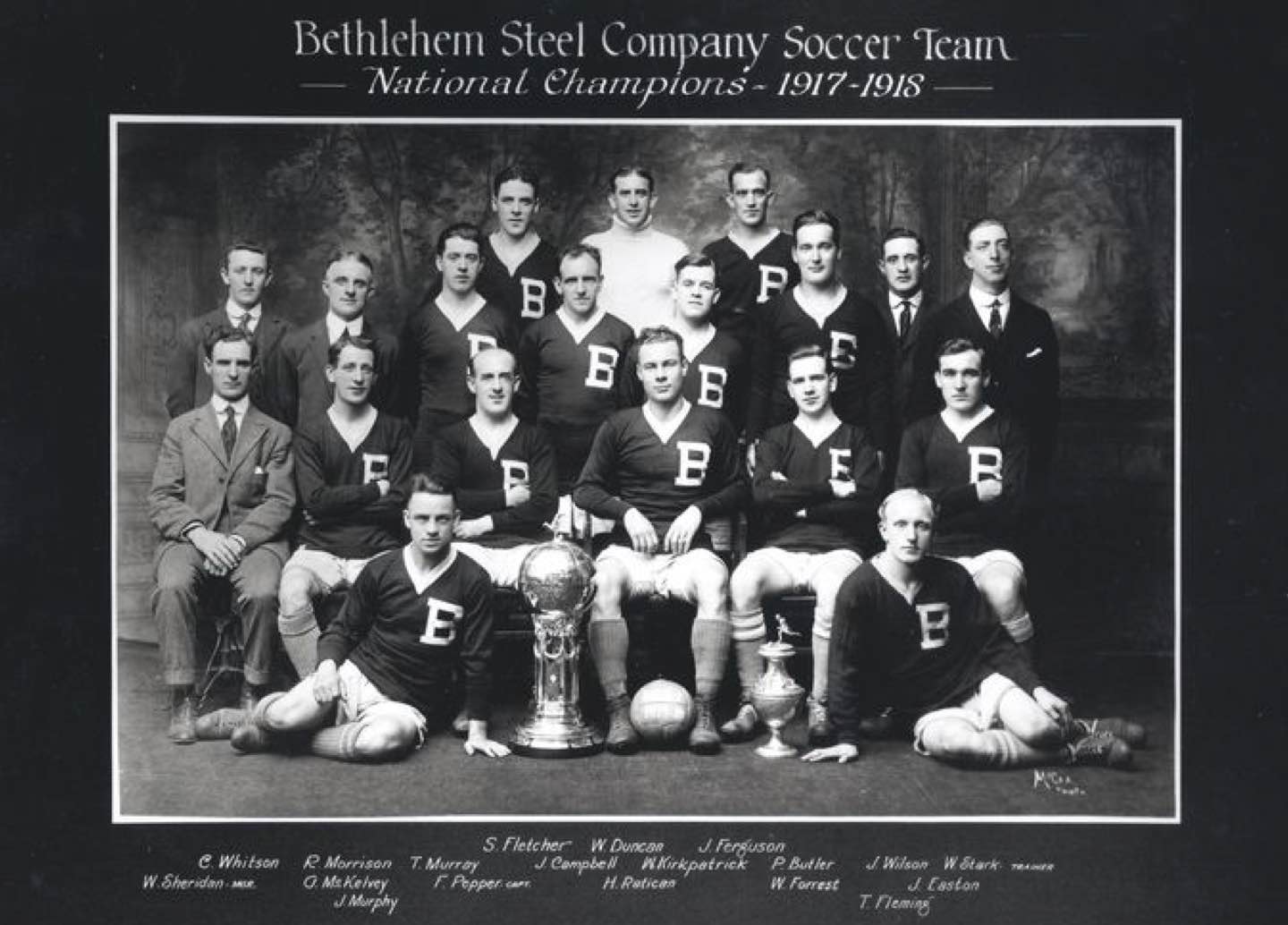 The Spanish flu was still going around, though, and a “third wave” crashed on the population in early 1919. On Jan. 11, Open Cup Quarterfinalist New York FC lost captain George Young, who succumbed to double pneumonia, having played “his last game against the Scottish-Americans when New York eliminated that club from the national championships at Newark, Dec. 29,” according to the New York Tribune.

No Time for Sentimentality

There was apparently not much time for grieving, and the replay with Morse-Federal Shipyard (scheduled after the original meeting ended 0-0) went ahead on Jan. 12, 1919. Sinkey Sullivan scored both Morse goals as the teams were tied, 2-2, after 90 minutes. Sullivan added two more goals and Neil O’Donnell another for a 5-2 Morse victory in extra-time.

That set up a Quarterfinal showdown with New York FC, Morse taking a 2-0 win on goals by Fred Beardsworth and Tom McGreevey on March 3, 1919. But Paterson FC proved a road too far for the “Morsemen” in the Semifinal at the Federal League Park in Harrison, N.J., March 30, 1919. Paterson featured 20-year-old Davey Brown and 22-year-old Archie Stark on the front line, and were apparently fortunate to field fullback George Post, wounded veteran of the Argonne Offensive in France. Post, who went on to play four seasons in the American Soccer League (ASL), was doubtful for the game, not because of injury, though. According to the New York Tribune, Post “went AWOL a couple of times to play football recently and probably is confined to the limits of Camp Dix, if, indeed, he is not more restricted than that.” 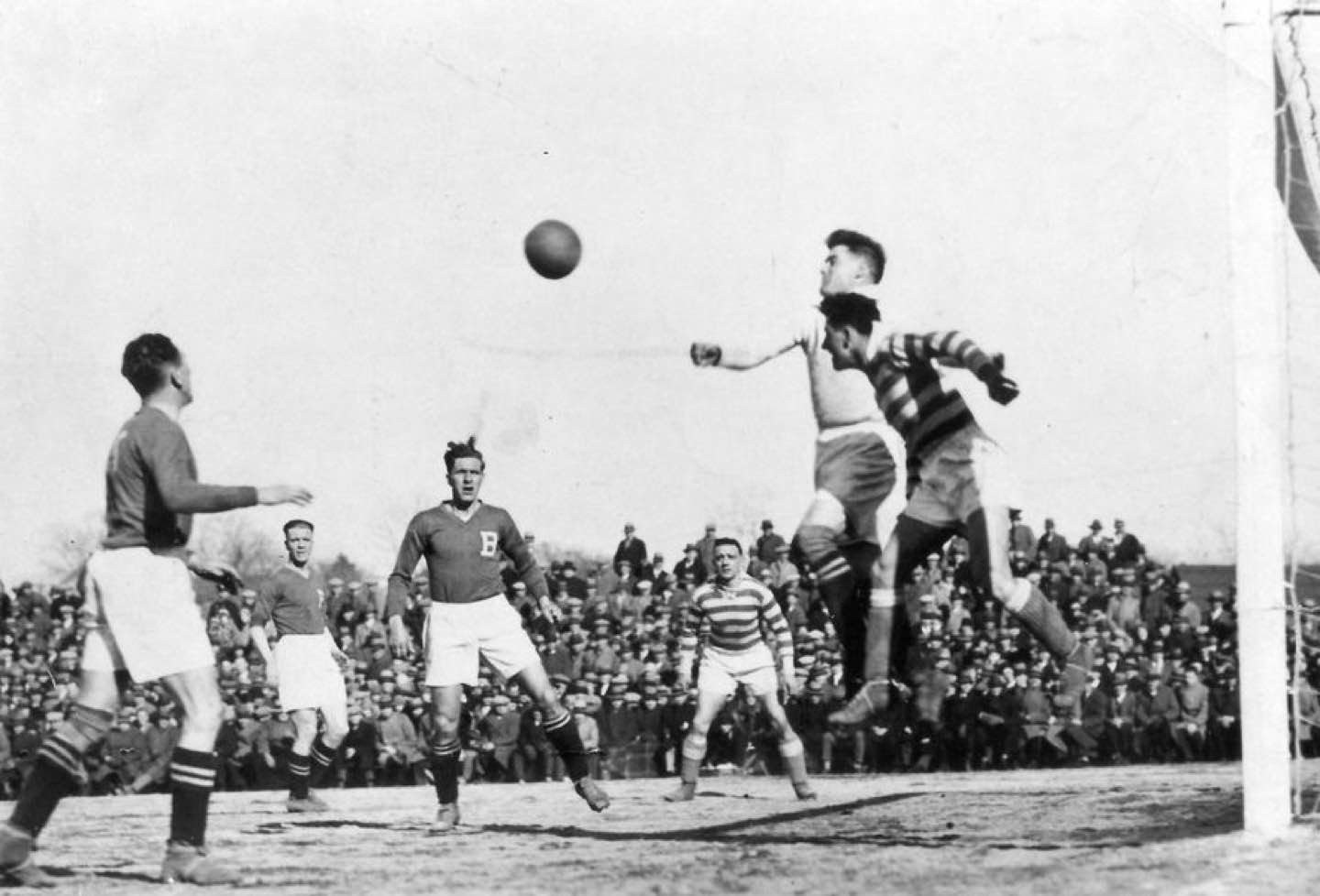 The “Pats” were 4-1 victors as Stark and Herman Bleich scored twice, Beardsworth countering for Morse. The result sent Paterson FC into their first-ever Final. It would also be the first appearance in an Open Cup decider for any team from New Jersey.

Meanwhile, tournament favorites Bethlehem Steel stormed through their bracket with 5-0 victories over Goodyear FC in the Quarters and Bricklayers & Masons in the Semis. That result came one day before the sixth game of the Stanley Cup finals was canceled because several Montreal Canadiens fell ill (defenseman Joe Hall later died of pneumonia). The series was not completed.

The Open Cup, though, soldiered on to the end. In the Final, Bethlehem Steel took a 2-0 victory over Paterson before a sellout crowd of 10,000 at Fall River (Mass.) Athletic Field on April 19. George McKelvey and Harry Ratican converted in the second half as the Steelmen captured their fourth title in the space of just five years.

When Andrew Brown and the National Challenge Cup committee first met at the historic Broadway Central Hotel in New York on August 23, 1918, they could not have known how long the war would continue, if Pancho Villa would continue his border raids, or if the burgeoning virus would spread. The war concluded with an Allied victory and the Mexican Revolution died out. The Spanish flu ended up infecting about 500 million people and causing up to 50 million deaths world-wide, “more people than any other outbreak of disease in human history,” noted John M. Barry in The Great Influenza: The Epic Story of the Deadliest Plague in History. 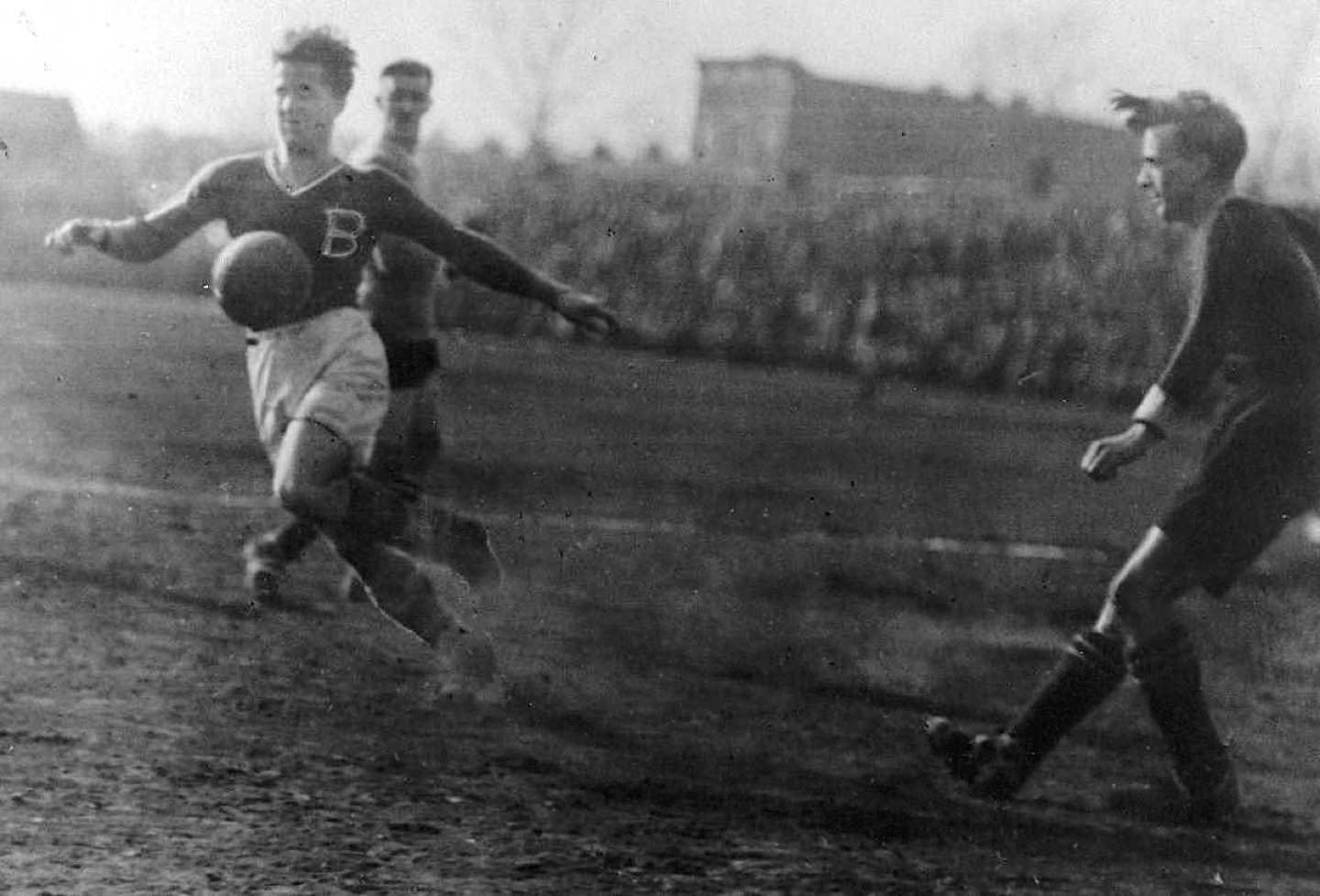 Meanwhile, Brown’s committee planned for the Open Cup Final to be conducted on or before April 20, 1919. Somehow, by some miracle or accident, they’d gotten it right.

“The Committee is fully conscious of the fact that the net results of its labors are not so highly satisfactory as in former years,” Brown wrote. “Nevertheless it is the feeling of every member that the work undertaken was of an unusual nature, that the conditions were altogether exceptional, and that the main idea of keeping the Competition active throughout a comparatively inactive season, was accomplished with gratifying success.”