CHICAGO (March 26, 2021) – The 2021 U.S. Soccer eNational Team will be determined during the U.S. Soccer eNT Open, a fully online qualifying tournament which will be played from April 1-9.

The 2021 U.S. Soccer eNT Open will be the first, official selection tournament to select the U.S. eNational Team representatives that will compete in the FIFAe Nations Online Qualifier 2021, which will occur later this spring.

The U.S. Soccer eNT Open 2021 is a notable change in the qualifying process from 2019, where the winner and runner-up from the 2019 eMLS Cup comprised the U.S. roster at the FIFAe Nations Cup 2019.

In an effort to open the door of entry to a broader group of players, U.S. Soccer will host the open portion of the competition from April 1-3. Both PlayStation and Xbox players at all levels are welcome to participate in the open competition, and registration is now open.

The total competitors in the closed competition will be 8 per console. The closed final will be seeded based on the FIFA Global Series Rankings as of March 26. U.S. Soccer will be extending invites to the closed finals over the next few days and will release the listing of pros prior to the registration end date.

The PlayStation and Xbox winners of the closed finals on April 9 will form the two-player squad which will represent the United States during qualification for the FIFAe Nations Cup 2021 and other eNational Team events during the year.

“This is another step forward for us in our eFootball initiative,” said U.S. Soccer Chief Commercial Officer, David Wright. “We are excited to open a pathway to the eNational Team for the broader community of players and fans across the United States, while also recognizing the commitment and success by those at the top of the FIFA Global Series rankings. Esports continues to provide us with an opportunity to connect with new fans and grow interest in the sport of soccer here in the United States. We’re looking forward to a thrilling competition and determining our two eNational Team representatives for this year.” 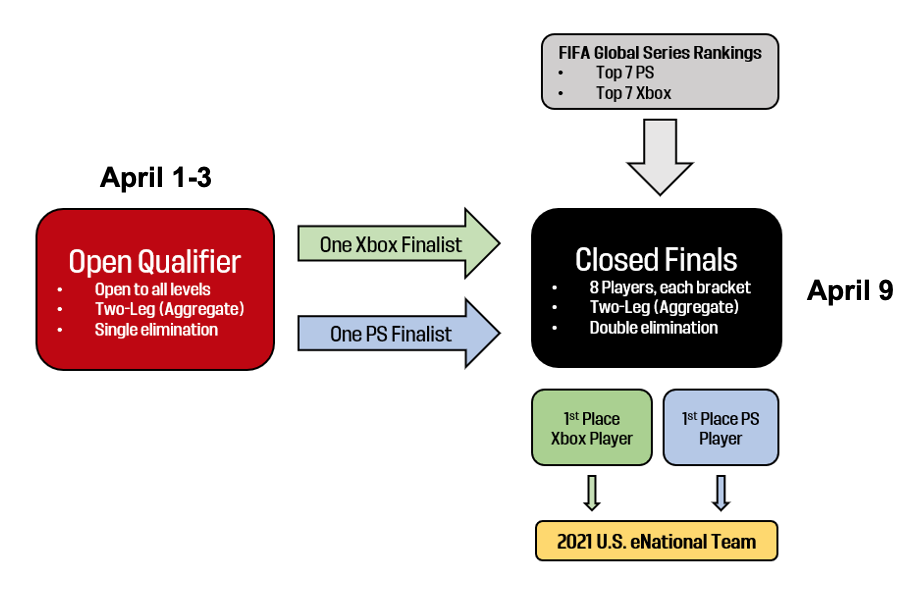 With national pride and global glory at stake, FIFA’s official inter-nation competition will feature the world’s best countries in EA SPORTS FIFA 21 with its second edition following the inaugural event in 2019. The best eNational teams on the planet will represent their country in the FIFAe Nations Cup 2021 later this year. The FIFAe Nations Online Qualifier will determine the line-up for the FIFAe Nations Cup 2021. The specific date for the online qualifying tournament will be announced by FIFA in the near future.