CHICAGO (July 17, 2021)— With a 6-1 against Martinique having secured their place in the knockout phase, the U.S. Men’s National Team will face northern neighbors Canada on Thursday, July 15 in Kansas City, Kan. The USA and Canada have each won their first two Group B games and have both clinched a spot in the Quarterfinals. Canada has one-goal edge in goals scored heading into the match, meaning the USA will need a victory to finish atop the group.

Daryl Dike, 21, became the second-youngest USMNT player to score twice in a Gold Cup match, leading the charge with two goals while Miles Robinson, Gyasi Zardes, and Nicholas Gioacchini each added one in Thursday’s win against Martinique.

The match featured five players making their first career starts, and two making their international debuts. After making their USMNT debut off the bench on Sunday night against Haiti, Gianluca Busio, James Sands and Eryk Williamson each earned their first starts. George Bello, who debuted in January, also made his first start, as did newcomer Matthew Hoppe, who played his match for the U.S. at any level. Donovan Pines then became the 47th different player to make his USMNT debut under Gregg Berhalter when he entered in the second half.

With an average of 23 years, 84 days, the starting XI against Martinique was the youngest the USMNT has fielded in a competitive match going back to 1989.

The Canadians have been firing on all cylinders, cruising to consecutive 4-1 wins to place themselves in pole position. They kicked off its group play with a 4-1 opening Gold Cup win over Martinique on Sunday. After Mark-Anthony Kaye’s back pass attempt was intercepted by Sebastien Cretinoir that allowed the Caribbean side to grab a 10th-minute lead on Emmanuel Riviere's goal, Les Rouges bounced back with four unanswered goals. Cyle Larin, Jonathan Osorio, Stephen Eustáquio and Theo Theo Corbeanu did the damage.

In their Thursday night win, Larin recorded a brace after Eustáquio put his name on the scoresheet, with Junior Hoilett closed out the scoring. 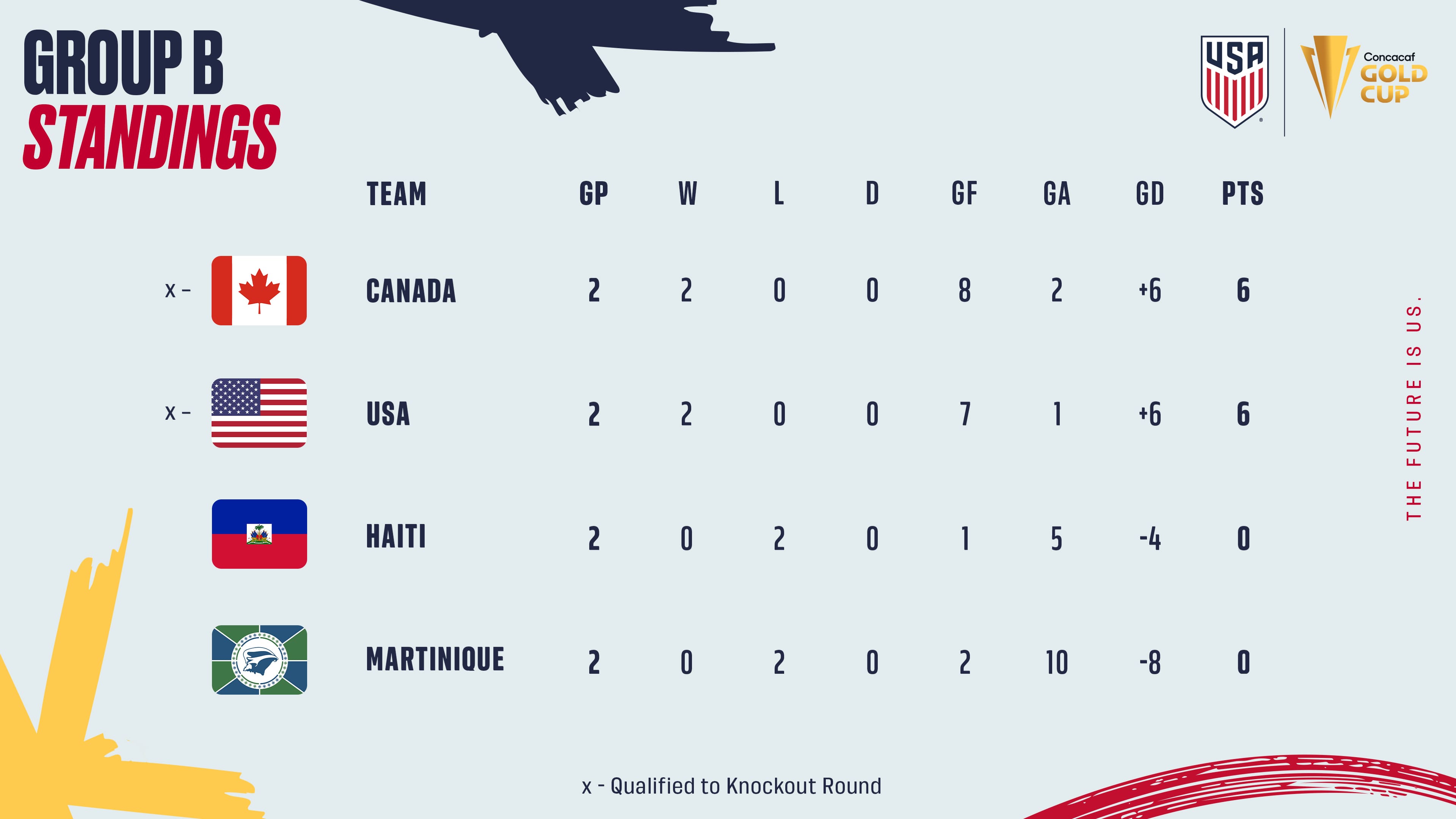 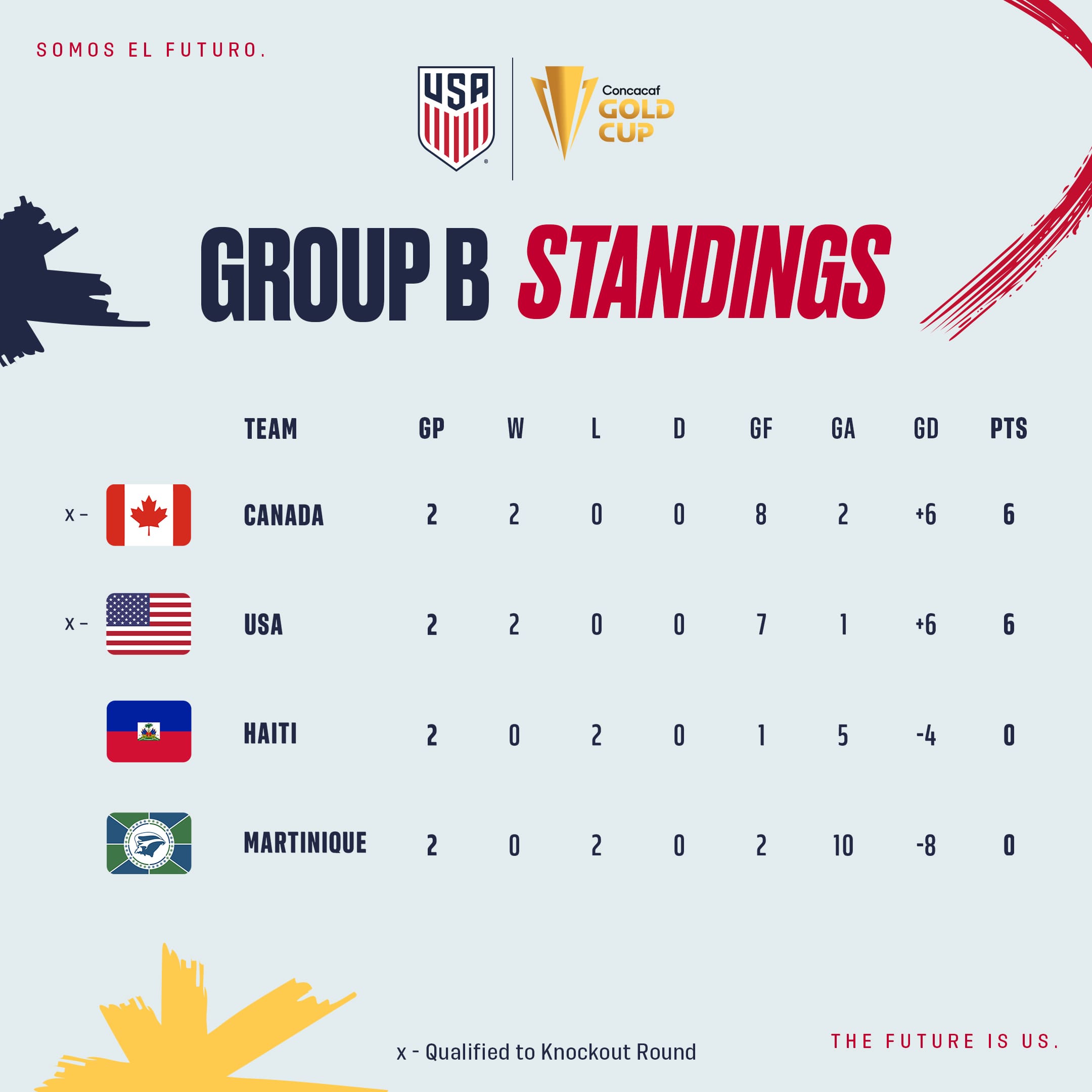 WHAT IS THE CONCACAF GOLD CUP?

The top two teams in each of the four groups advance to the quarterfinals (July 24-25 in Arlington, Texas and Glendale, Ariz.). The semifinals are scheduled for July 29 in Austin and Houston, before the championship match on Aug. 1 in Las Vegas.

USMNT AT THE GOLD CUP 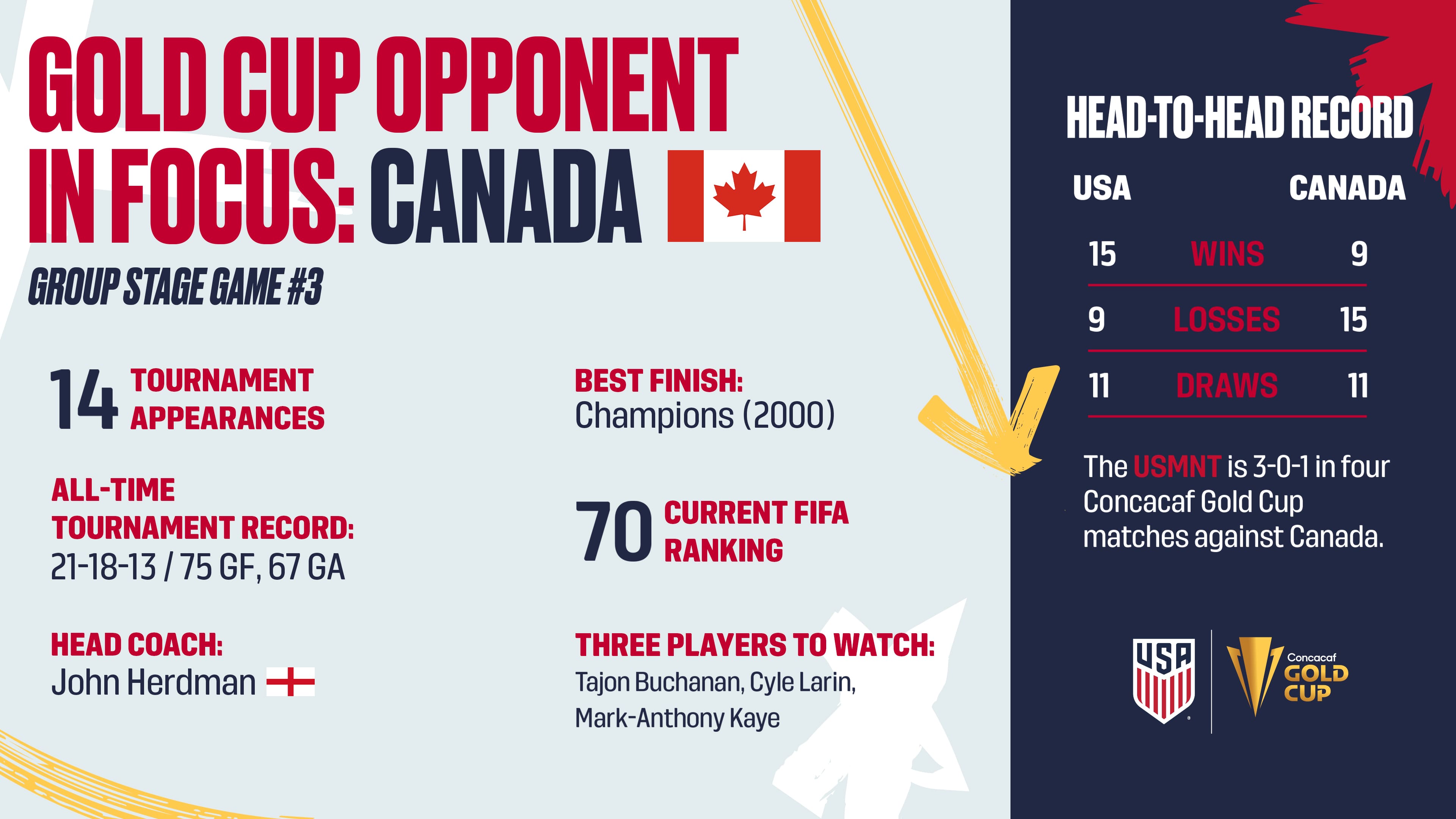 The Canadians are riding an eight-game winning streak which started March 25 during World Cup Qualifying. During that time, they have outscored their opposition, 39-3, and at one point recording five consecutive clean sheets. They qualified for the WCQ final round by blanking Haiti twice. Cyle Larin scored in each win, a 1-0 victory on June 12 and a 4-0 triumph on June 15. Canada added a Junior Hoilett tally and an own goal.

This is considered a golden generation for Canada, which has reached the Concacaf WCQ final round for the first time since 1998.

Former Orlando City SC standout forward Cyle Larin, 26, who struck for 19 goals in 38 matches for Beşiktaş (Turkey) in 2020-21, has been vital to the attack. The four-time Gold Cup performer has found the net a team-high 10 goals in eight appearances in 2021 and has scored in four successive games. He has connected for a tournament-high three goals (through Thursday night). He tallied twice in the win over Haiti, giving him 18 goals in 39 international matches.

Midfielder Tajoun Buchanan, 22, who has emerged as an important piece of the puzzle for the New England Revolution and the national team. Utilizing his speed, Buchanan set up goals in both of Canada's opening Gold Cup wins.

For Sunday's confrontation, the Canadians will be without midfielder Stephen Eustáquio, who scored in each of their opening two matches. Eustáquio, who plays for F.C. Paços de Ferreira (Portugal), incurred his second yellow card of the tournament against Martinique and must sit out the USA encounter.