A Win on Thursday Would Put USA in Prime Position to Reach Knockout Phase; Kickoff from Children’s Mercy Park in Kansas City, Kan. Set for 10 p.m. ET on FS1, UniMás, TUDN
July 14 2021
On the Pitch

CHICAGO (July 14, 2021)—After a hard-fought 1-0 win against Haiti to open the 2021 Concacaf Gold Cup, the U.S. Men’s National Team will face Martinique in its second group stage match on Thursday, July 15 in Kansas City, Kan. Depending on the result of the night’s first match between Canada and Haiti, a win could push the USMNT into the tournament’s knockout phase as one of the top two teams in Group B.

OFF ON THE RIGHT FOOT

The USMNT took the initiative from the opening kick against Haiti in its first Gold Cup match, creating a number of dangerous chances in the early going before a breakthrough in the eighth minute. Forward Gyasi Zardes teed up defender Sam Vines for a well-placed header and the left back’s first career international goal. While the U.S. had several opportunities for an equalizer, including a few attempts off the woodwork by Walker Zimmerman, Vines’ goal would prove to be the difference in the 1-0 win against Les Grenadiers.


The assist on Vines’ goal marked the 10th of Zardes’ career, making him the second-fastest USMNT player to record double-digit goals and assists.  The 12th USMNT player to reach the milestone, Zardes got there in 57 caps, coming in behind only U.S. legend Landon Donovan. The 29-year-old forward joins the likes of Cobi Jones, Clint Dempsey, USMNT General Manager Brian McBride and U.S. Soccer Sporting Director Earnie Stewart in the 10 & 10 Club.

Three players made their USMNT debut in the shutout against Haiti: midfielders Gianluca Busio and Eryk Williamson, as well as defender James Sands. A midfielder for Sporting Kansas City, Busio picked up his first cap to the tune of a roaring ovation from his home fans at Children’s Mercy Park. All three are products of the U.S. Youth National Team set-up and represented the USA at FIFA Youth World Cups before entering as second-half substitutes in the Gold Cup opener.

With Sunday night’s debuts, head coach Gregg Berhalter has given 45 players their USMNT debut through his first 30 games in charge, the most of any manager at this point in their tenure. Forward Matthew Hoppe and defender Donovan Pines could also join that list as the two remaining uncapped players on the Gold Cup roster. 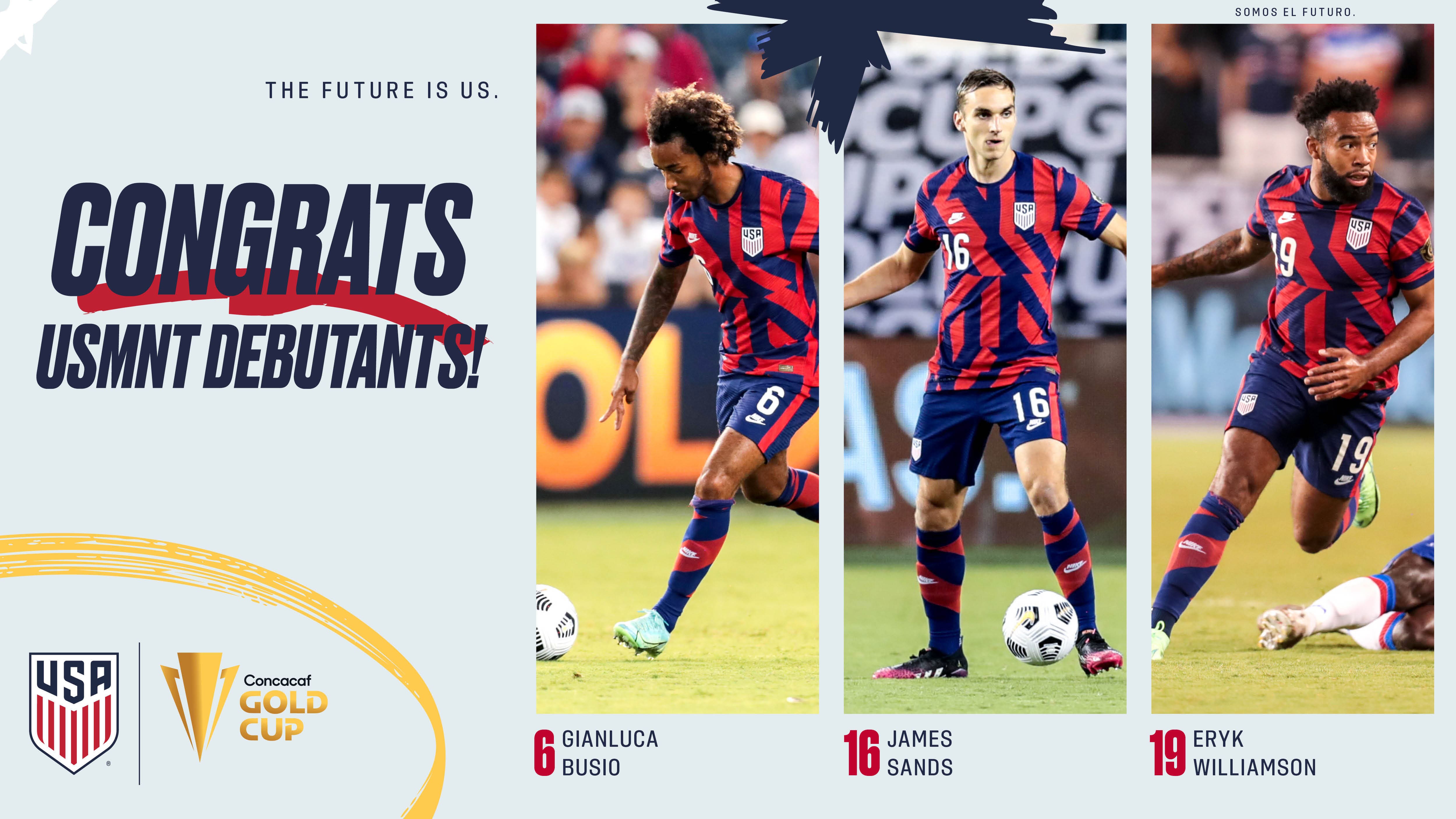 In addition to the first caps, six more players made their first appearances for the USMNT in official competition. The three debutants, plus goalkeeper Matt Turner, defenders Shaq Moore, Miles Robinson and Sam Vines, midfielder Nicholas Gioacchini and forward Daryl Dike are all now officially cap-tied to the USA.

Back to the USMNT for the first time since November 2018, Moore’s on-field return came a bit sooner than anticipated when defender Reggie Cannon picked up a knock before Sunday night’s match. Moore found out he’d be replacing Cannon in the starting lineup just a few hours before kickoff, but seized the opportunity with an impressive performance, winning U.S. Soccer Insiders Man of the Match for his efforts.

EARLY LEAD NOT ENOUGH FOR MARTINIQUE

Martinique jumped out to an early 1-0 advantage on Canada in its Gold Cup opener, but it couldn’t hold on to the advantage as Canada, the No. 5-ranked team in Concacaf, roared back for a 4-1 victory. Emmanuel Riviere netted in the 10th minute for Les Matinino, but Canada equalized just six minutes later and built a 3-1 lead by the 26th. A late goal put a cap on things and left Martinique squarely at the bottom of the Group D standings. 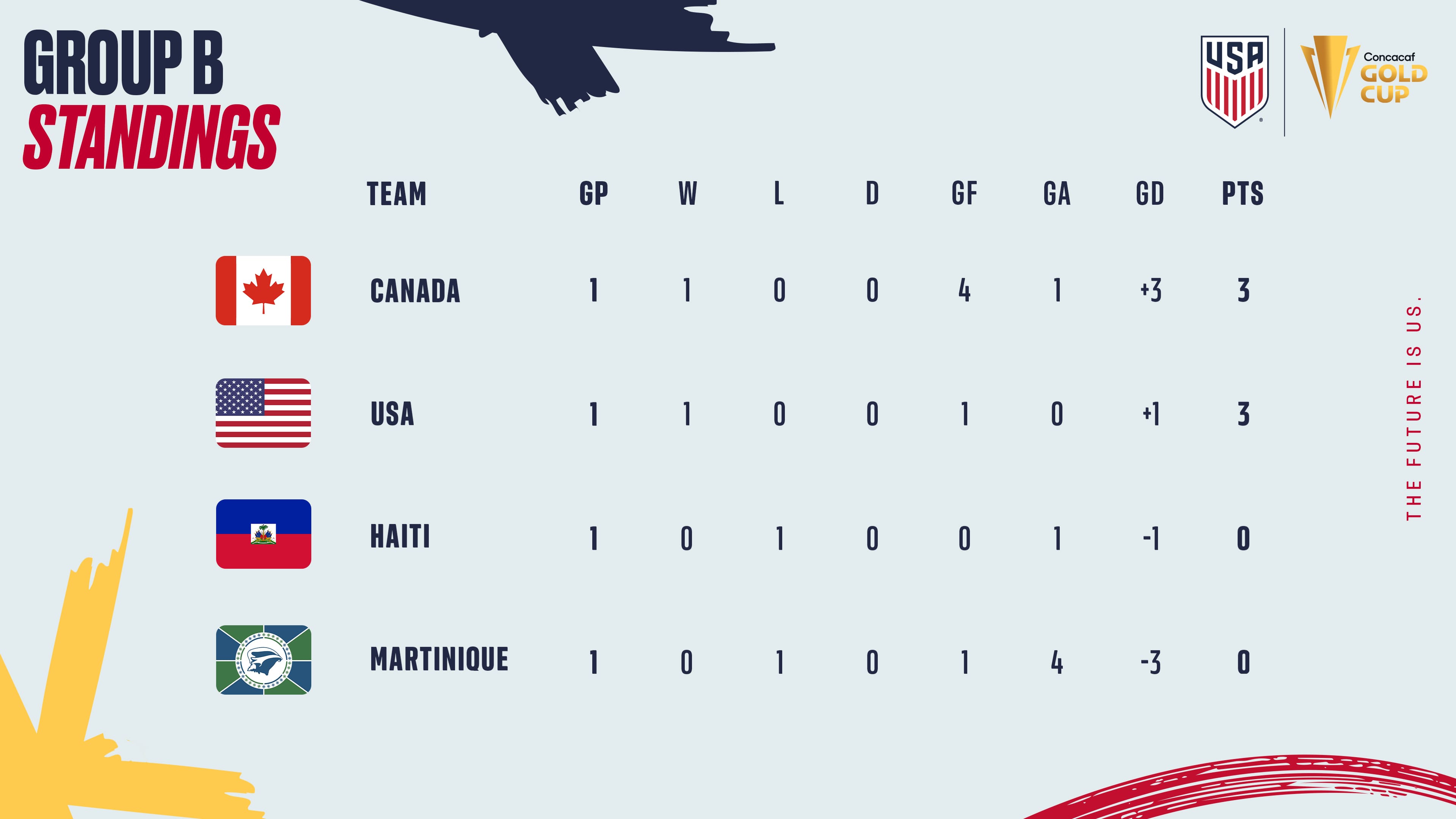 WHAT IS THE CONCACAF GOLD CUP?

The top two teams in each of the four groups advance to the quarterfinals (July 24-25 in Arlington, Texas and Glendale, Ariz.). The semifinals are scheduled for July 29 in Austin and Houston, before the championship match on Aug. 1 in Las Vegas.

USMNT AT THE GOLD CUP

Martinique qualified for the 2021 Gold Cup after finishing second in its Concacaf Nations League A group with an 0-1-3 record.

It’s the island’s third consecutive Gold Cup and seventh appearance overall. Martinique reached the tournament quarterfinals in 2002, the only time it’s advanced from the group stage. Overall, Martinique is 4-11-2 at the competition.

Martinique is an Overseas Department of France and not an independent country. As a result, the island is not recognized by FIFA and can only compete in Concacaf competitions.

Midfielder Daniel Hérelle’s 79 caps lead the team, while midfielder Stéphane Abaul’s nine international goals are the most of any player on the Gold Cup roster.

Eighteen players on the Martinique roster compete for six different clubs on the island, with the most, six, coming from Golden Lion.

Five players are based overseas in France (three) as well as Italy and Spain (one each).

Head coach Mario Bocaly has led Les Matinino since Dec. 2017. A native of Martinique, he’s coached for a number of clubs on his native island.