The U.S. Men's National Team has managed to record an unbeaten record (2-0-2) in four visits to Estadio Rommel Fernandez against Panama in FIFA World Cup qualifying over the years.

Each game has written its own unique story with 11th-hour goals and heroes, complete with elation for the visitors and despair and disappointment for the home side and its supporters.

Ahead of the USMNT’s latest visit to Panama City, here is a look at three unique encounters in which the USA forged important results away to Los Canaleros.

The team certainly has had a flair for the dramatic occasion, particularly in Panama.

For the second consecutive qualifying road match, the Americans pulled out a dramatic, late draw as all-time USMNT cap leader Cobi Jones – brought back to the team for the time in more than a year -- struck two minutes into stoppage time for a 1-1 tie in Panama City.

Jones scored from eight yards in a water-logged penalty area 85 seconds into added time to give the Americans a vital road point.

"We have a natural attitude of never saying die," Jones said. "We're a team that never quits." Three weeks prior on Aug. 18, the USMNT pulled out another 1-1 deadlock on the road, on an 89th-minute goal by Brian Ching.

"I give the U.S. credit for passing the character test," USMNT head coach Bruce Arena said. "It is certainly not a perfect performance, but we are on the road, and we take two points away from the home team."

The game was played in less than ideal conditions. There were only four light towers and no working scoreboard as another storm loomed in the distance. It never reached the stadium, but the USA provided some thunder and lightning in the 11th hour.

Panama, which up until then had never qualified for a World Cup, was on the cusp of an upset on the strength of Roberto Brown's 69th-minute goal against the favored Americans, who were vying to qualify for their fifth consecutive World Cup.

The stadium, already a sea of red with spectators proudly wearing the colors of their team, erupted with smoke bombs and popcorn and drinks flying down from the upper deck.

Trailing 1-0 as the game moved into stoppage time, a long pass was lofted into the penalty area where it fell for Landon Donovan. The young attacker hit a one-time effort that slowed heavily as it trailed through a big puddle, but it fell at the feet of Jones, who bundled it past Donaldo Gonzalez for the equalizer.

It was Jones' 15th goal in his penultimate, 163rd international appearance for the Red, White and Blue.

"It bounded straight down across the goal," Donovan said. "My eyes got big. I went to shoot out, it hit a little puddle and stopped. It kind of came off the end of my foot and went to Cobi.

"Things happen for a reason."

On their next trip to Panama City some eight months later, the USA didn't need any late-match heroics. They connected for three goals in the opening 40 minutes, rolling to a 3-0 triumph before 23,000 fans.

Despite steamy conditions - the contest was played in 81 degrees and 89 percent humidity - the visitors dominated from start to finish as the USA (4-1-0; 12 points) solidified its second-place standing in the Hexagonal. Winless Panama fell to 0-3-2 (two points).

"This was a golden opportunity and we took advantage of it," Landon Donovan said.

Donovan's corner kick to Carlos Bocanegra opened the scoring in the sixth minute. Bocanegra's header went in off the hand of goalkeeper Donaldo Gonzalez and the USA never looked back. 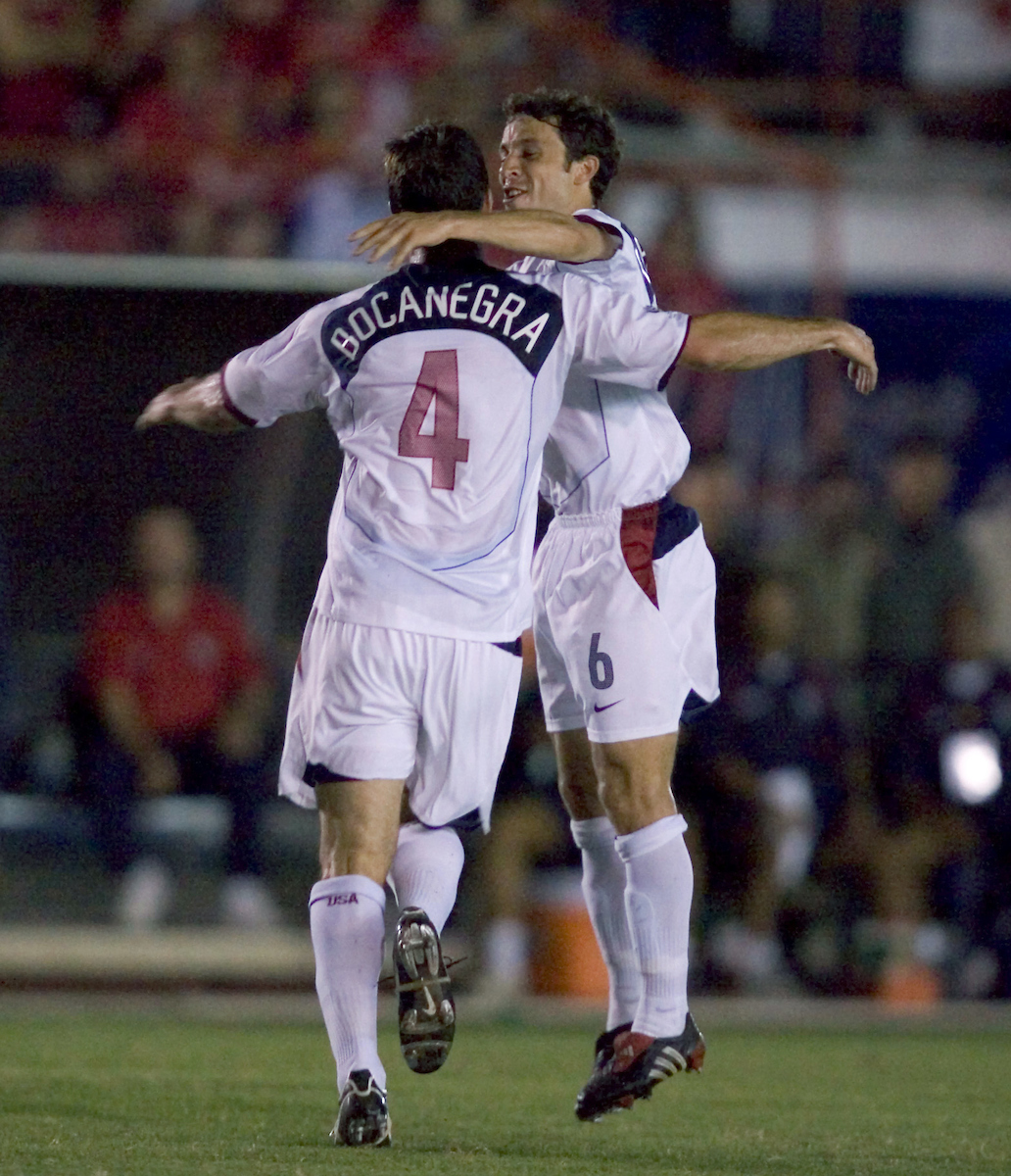 Steve Ralston sent in a right-wing cross that Donovan headed in from 10 yards, giving him seven goals in 13 qualifiers and 22 in 64 international matches.

Brian McBride closed out the scoring in the 40th minute. Frankie Hejduk took a long-range shot that was blocked by defender Felipe Baloy. McBride hammered home the rebound for a three-goal halftime advantage.

The Panamanian players were booed as they walked off the field at halftime. 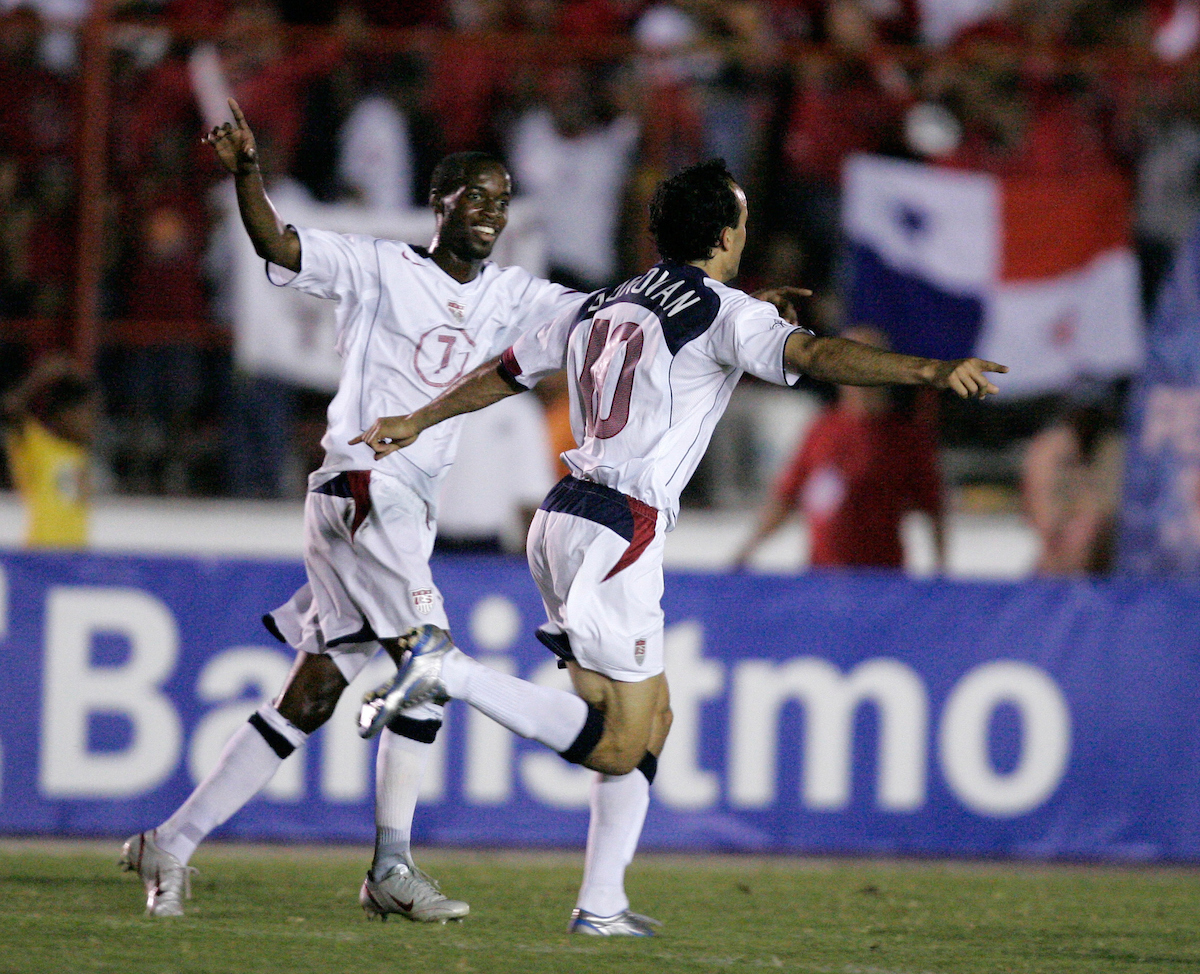 On the other side of the ball, goalkeeper Kasey Keller was stellar, making two spectacular saves on consecutive attempts in the same sequence in the 26th minute en route to his 39th career clean sheet in 81 matches. He denied Roberto Brown's shot in front of the goal before he batted away Baloy's follow-up shot seconds later.

"It kind of hit me and I was able to gather it after that," Keller said of Baloy's try.

The only downer of the match was Eddie Pope's yellow card in the 10th minute, which forced him to miss the USA's qualifier against Trinidad & Tobago in East Hartford, Conn. on Aug. 17.

The three-goal win stood alone as the USMNT’s biggest margin of victory in final round World Cup Qualifying until the team’s most recent effort, a 4-1 win at Honduras on Sept. 8, 2021.

Even with a 2014 FIFA World Cup berth already secured a month earlier, the USMNT did not put its brakes on another encounter at Estadio Rommel Fernandez. Not only did Jurgen Klinsmann’s side defeat Panama, 3-2, they rallied for two goals in stoppage time to eliminate the hosts from contention and propel archrival Mexico into an intercontinental playoff against Oceania champion New Zealand.

Graham Zusi and Aron Johannsson found the range in added time in a wild finish to a game played in a downpour in Panama City. 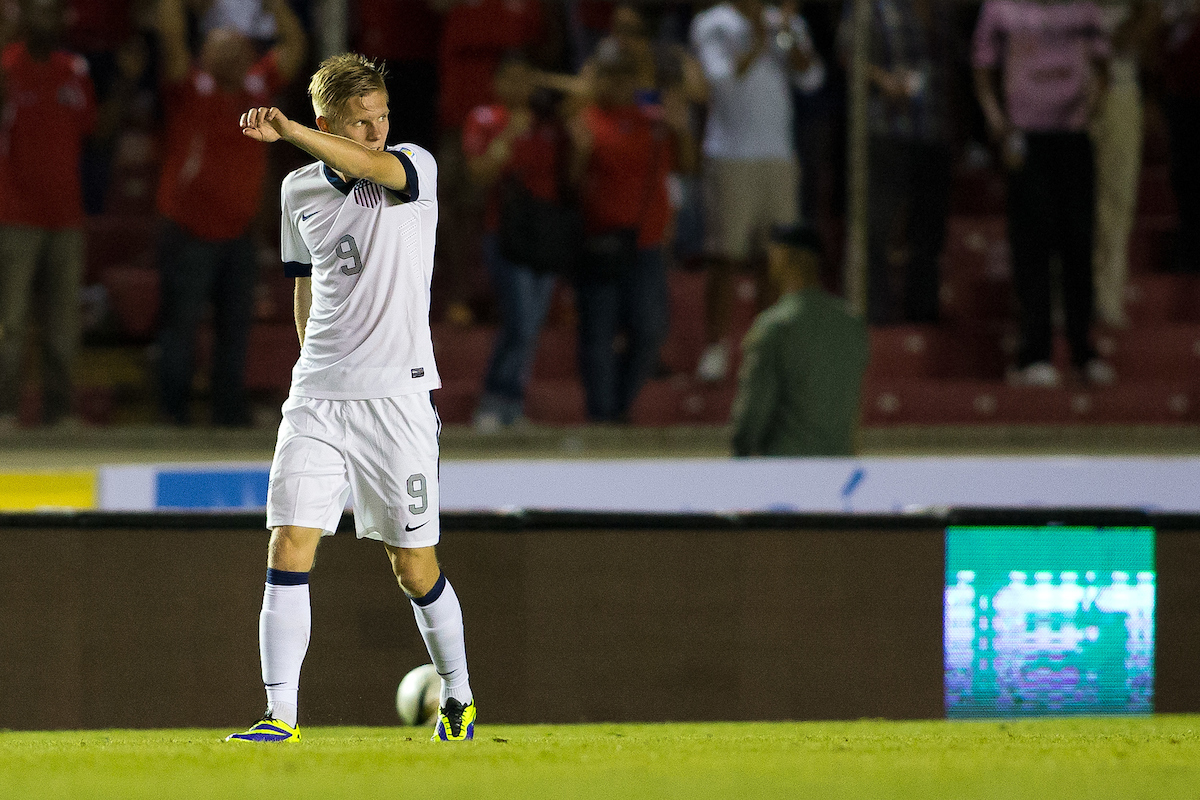 In many respects, the match had a similar finish to a 2010 WCQ in Washington, D.C. on Oct. 14, 2009. That's when Jonathan Bornstein's goal in the fifth minute of injury time boosted the U.S. into a 2-2 draw with Costa Rica, knocking out the Ticos and allowing Honduras to clinch a spot in South Africa.

"It shows you how brutal football can be," Klinsmann said after the match. "Now obviously you feel for the people. You feel for an entire country."

Klinsmann decided not to use many of his regulars due to injuries or decisions to allow players to remain with their club teams. The list included Landon Donovan, Clint Dempsey, Michael Bradley, Jermaine Jones, Tim Howard, Omar Gonzalez and Matt Besler.

The team he deployed was up for the task.

Gabriel Torres lifted the hosts into the lead in the 18th minute, scoring past goalkeeper Brad Guzan after an Edgar Castillo giveaway. 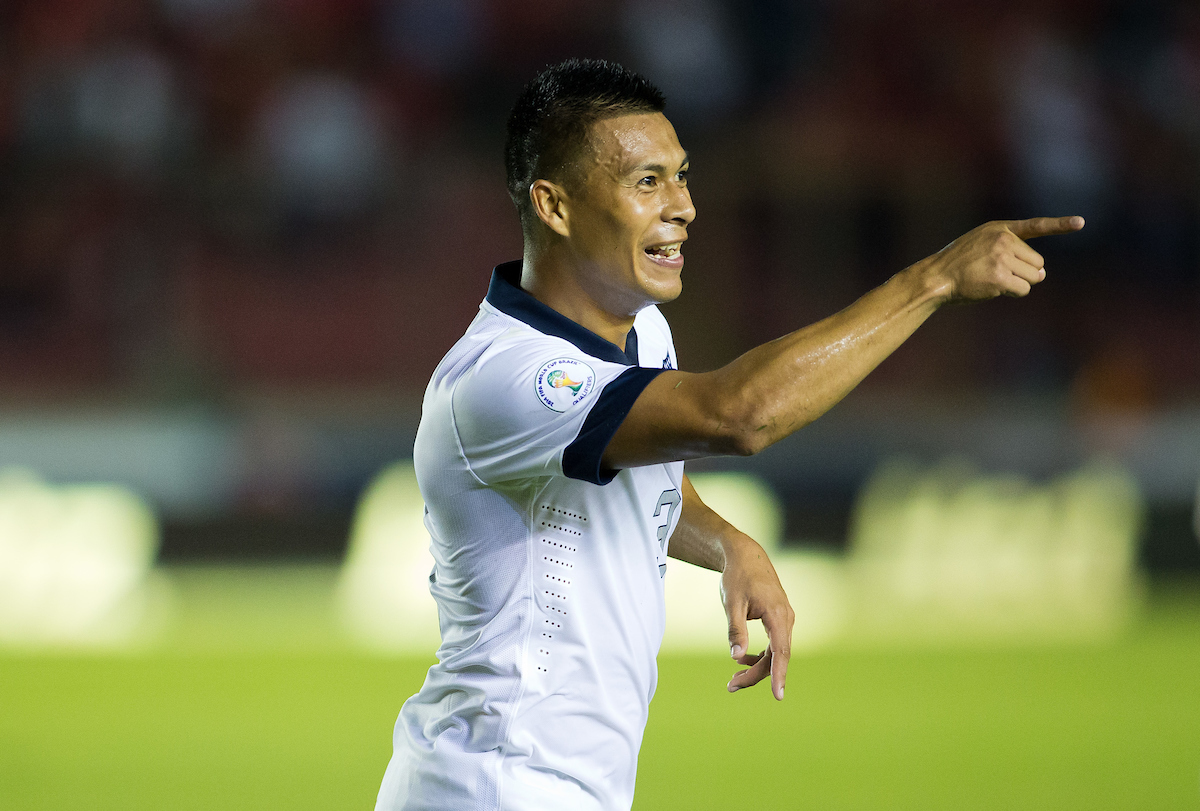 The USA's Michael Orozco, however, equalized in the 64th minute with his third international goal. After a Brad Davis corner kick, Sacha Kljestan was knocked down by Luis Henriquez in front of the net as the ball went to Orozco. With his back to the goal, Orozco slipped the it home from six yards for a 1-1 deadlock.

Panama grabbed the lead in the 83rd minute as Luis Tejada tallied, slotting the ball home after Guzan had slapped it away. If the score held, Panama would have finished fourth in the Concacaf Hexagonal and advanced to the playoffs.

The USA, however, wouldn't say die. Castillo started the first stoppage-time scoring sequence with a pass to Davis. The midfielder sent the ball to Zusi, who headed it past goalkeeper Jaime Penedo from eight yards just over a minute into added time. It was Zusi's second goal in five days and third international of his career.

A little more than a minute later, Johannsson, off a Terrence Boyd feed, drilled in a shot from the penalty arc for his first international goal to snap the deadlock. "Obviously, it's nice to win," Johannsson said. "But you see all the players went down. It was a very tough time. The whole stadium was just quiet. It's hard to know what to say. It's hard to be in that situation, especially when you lose in the 90th minute and almost qualifying for the World Cup."

Added Klinsmann: "This is just how football writes these crazy, emotional stories, and you're in the middle of it. ... When Graham scored that header ... it was all quiet, silence, and you feel for them."