The U.S. Women’s National Team opened the 2022 Concacaf W Championship with a victory in its first match against Haiti on July 4 and will look to continue its winning ways while moving one step closer to qualifying for the 2023 FIFA Women’s World Cup when it returns to the field on Thursday for its second Group A match, taking on Jamaica at Estadio BBVA in Monterrey, Mexico at 6 p.m. local/7 p.m. ET (Paramount+, ViX).

Thursday’s matchup will have important implications for the Group A standings as Jamaica also opened the Concacaf W Championship in victorious fashion, beating hosts Mexico, 1-0, behind an early goal from star forward Khadija “Bunny” Shaw.

The top two finishers in each of the two groups at the CWC will automatically qualify for the 2023 World Cup and will also advance to the semifinal round of the Concacaf W Championship. The third-place finisher in each group will advance to a 10-team intercontinental playoff tournament to determine the final teams in the expanded 32-team field for 2023. Additionally, the tournament champion will automatically qualify for the 2024 Olympics with the runner-up and the third-place nations progressing to a Concacaf Olympic playoff to be staged in September of 2023.

Playing its first match of the Concacaf W Championship on Independence Day, the USWNT kicked off the competition with a 3-0 win over Haiti at Estadio Universitario behind a first half brace from Alex Morgan and a late insurance tally from Midge Purce. Morgan gave the USA the lead in the 16th minute, connecting on the end of a cross from forward Mallory Pugh and scoring off a nifty backheel, and doubled the lead in the 23rd when she headed home a cross from defender Kelley O’Hara. Morgan, who is tied with Canada’s Julia Grosso for the most goals so far this tournament, has 21 goals in 21 career qualifying appearances for the USWNT and has scored in the last five consecutive Concacaf Qualifying matches in which she has played, a streak that dates back to 2018 World Cup Qualifying.

Purce, who came on at the half for her first-ever appearance for the USA in a Concacaf Qualifying event, tallied in the 84th minute for her second foal of 2022 and the fourth overall of her international career.

Defensively, the USA proved up to the task and pitched its 29th consecutive shutout in a World Cup or Olympic Qualifying event, a streak that dates back to its World Cup qualifying campaign in 2010.

Jamaica also sits on three points in the Group A standings after winning its opening match, 1-0, over Mexico, though the USA remains first in the group with a superior goal differential. 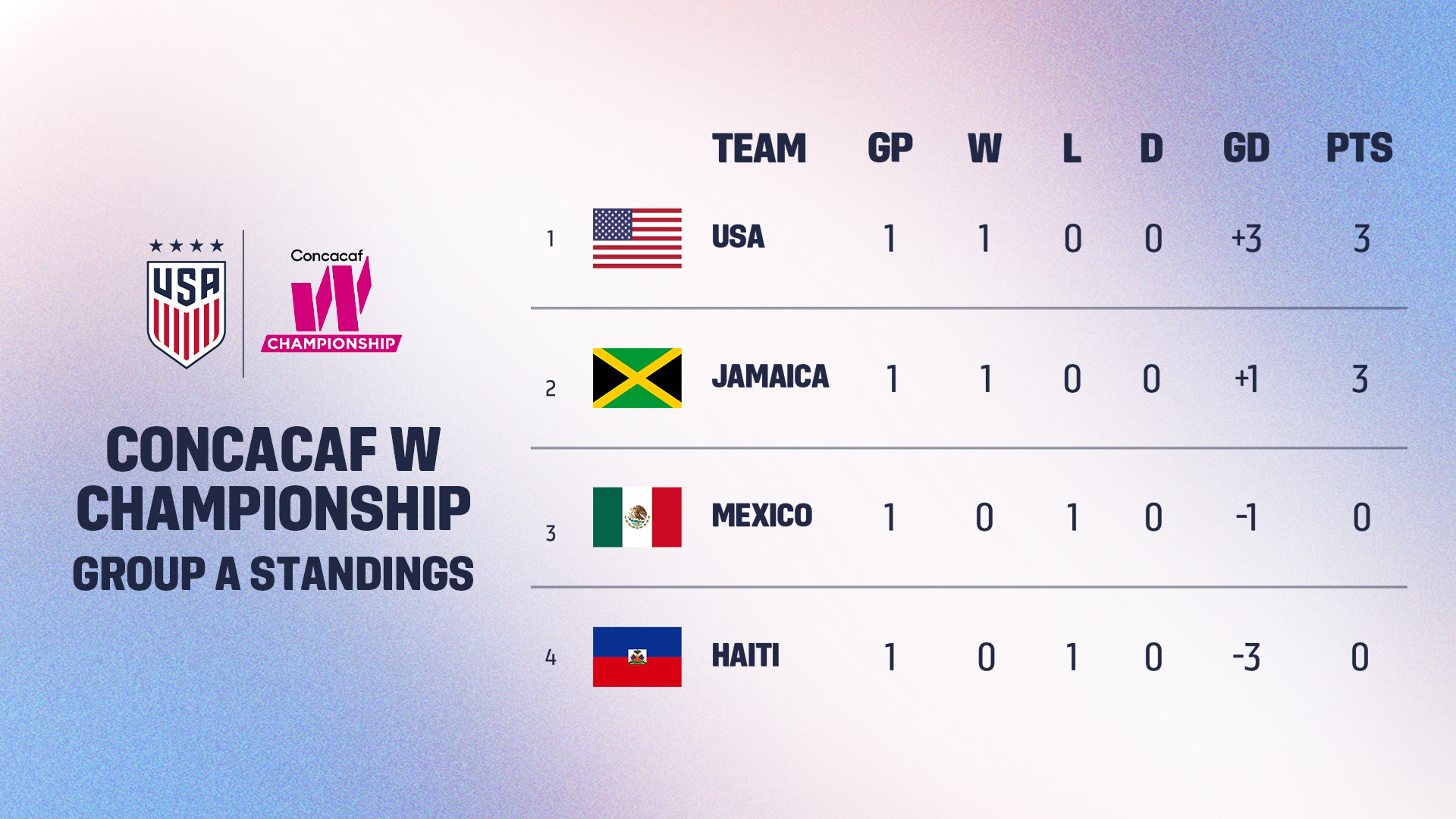 The final standings in each group will be determined by total points (three for a win, one for a tie), with the first tiebreaker being overall goal difference, followed by most total goals scored. The top two teams from each group will advance to the semifinal round, where the winner of Group A will play the second-place team from Group B and the Group B winner will face the runner-up from Group A for a spot in the final.

As it currently stands, the USA could clinch its berth in the 2023 World Cup on Thursday with a win over Jamaica and a Mexico draw or loss against Haiti in the second match of the day (9 p.m. local / 10 p.m. ET on Paramount+ and ViX). Jamaica, who is looking to make back-to-back World Cup appearances, could qualify for Australia and New Zealand 2023 with a win over the USA and a Mexico win or draw against Haiti.

Group B play kicked off on Tuesday, July 5, with both group matches played at Estadio BBVA, the site of the USA’s upcoming match against Jamaica. Costa Rica defeated Panama, 3-0, in the first match of the evening while Canada downed Trinidad & Tobago, 6-0, to close out the evening.

Teams are allowed to utilize five substitutes per match in this tournament, which the USA did in the tournament opener vs. Haiti.

Nine players of the 23 players on this roster for the Concacaf W Championship were part of the 2019 team that won the 2019 FIFA Women’s World Cup. Only 10 players entered this tournament with previous experience in World Cup or Olympic qualifying at the senior national team level, though eight players made their World Cup and Olympic Qualifying debuts in the July 4 win over Mexico – Cook, Fox, Mewis, Murphy, Purce, Huerta, Sanchez and Smith.


INSIDE THE SERIES: USA VS. JAMAICA

Thursday’s match in Monterrey will be the fifth meeting all-time between the USA and Jamaica and the fourth in a Concacaf Qualifying match. The USA has won each of the four previous meetings between the sides by shutout, the most recent of which came on June 13, 2021, during the WNT Summer Series friendlies. That match resulted in a 4-0 victory for the USA in Houston, Texas behind first-half goals from Carli Lloyd, Lindsey Horan and Midge Purce. Alex Morgan added an insurance tally in second-half stoppage time for what was her 110th career goal.

The most recent clash in Concacaf Qualifying came during the 2018 World Cup qualifying campaign when the USA defeated Jamaica, 6-0, on October 14, 2018 in Frisco, Texas. The victory, which came in the semifinal round of the tournament, qualified the Americans for the 2019 FIFA Women’s World Cup in France. Morgan and Tobin Heath both tallied braces in the win, and Julie Ertz and Megan Rapinoe also found the back of the net in the victory over the Reggae Girlz.

Jamaica and the USA also squared off in World Cup Qualifying in 1994 – a 10-0 victory for the Americans in Montreal, Canada – and in Olympic Qualifying in 2008, a 6-0 win for the USA in Ciudad Juarez, Mexico.

ABOUT THE CONCACAF W CHAMPIONSHIP

The eight-team field for the Concacaf W Championship features the USA and Canada, who automatically qualified for the championship round as the highest-ranked teams in the region at No. 1 and No. 6 in the world, respectively, along with the six group winners from the Concacaf W Qualifiers. For the qualifiers, 30 teams were drawn into six groups of five for the qualifying competition and played a total of four matches across the February and April 2022 FIFA Windows to determine the group winners. Mexico, Costa Rica, Jamaica, Panama, Haiti and Trinidad & Tobago won their respective groups to join the USA and Canada in the field for the Concacaf W Championship, which is one of the two new major women’s summer competitions taking place in the region from 2021 through 2024.

After round-robin group play in the Concacaf W Championship, the top two finishers in each group will qualify for the competition’s semifinals and guarantee their place in the FIFA Women’s World Cup. Additionally, both group stage third-place finishers will advance to a 10-team FIFA Women’s World Cup intercontinental play-off. At the conclusion of the Concacaf W Championship, the winning nation will also guarantee its place in the 2024 Paris Summer Olympic Games Women’s Football Tournament and the 2024 Concacaf W Gold Cup. The runner-up and the third-place nations will progress to a Concacaf Olympic play-in to be played in September of 2023. The winner of the play-in will also guarantee their place in the 2024 Paris Summer Olympic Games and the 2024 W Gold Cup.

With the opening match of the 2023 FIFA Women’s World Cup just over a year away, eleven teams have already qualified for the tournament, which has been expanded to now feature 32 teams, up from 24 in both 2015 and 2019. The nations that have already punched their tickets Down Under are co-hosts Australia and New Zealand, South Korea, Japan, China PR, Philippines and Vietnam from Asia, and Sweden, France, Denmark and Spain from Europe. This will be the first Women’s World Cup at any level for both the Philippines and Vietnam, who qualified through the AFC Asian Women’s Cup. Still to be filled are four slots from Africa, four from Concacaf, three slots from South America, seven remaining slots from Europe and three slots from the 10-team playoff tournament that will feature two teams from Asia (Chinese Taipei and Thailand), two from Africa, two from Concacaf, two from South America, one from Oceania and one from Europe.