The Brazilian – making his mark and more in his debut season with the Red Bulls – is hoping he can lift rare silverware with the Jersey-based club ahead of a crucial Open Cup Semifinal in Orlando.
Michael LewisJuly 18 2022
Open Cup

In Brazil the "indoctrination" starts at a young age.

Luquinhas was just three when his father gave him his first soccer ball.

"Ever since I knew I wanted to be a player," the New York Red Bulls midfielder told usopencup.com talking about the game, which turned out to be his first and enduring love. "There was nothing else in my mind but to be a football player. That's what I've always wanted to be."

Nothing else mattered. Luquinhas was soccer crazy from the start.


"I always slept with the soccer ball," he said through an interpreter in a recent interview. “When I woke up the first thing I had with me was a soccer ball. The only time I didn't get to play was when I was in school. But other than that, after school, before school, I always had the ball with me."

When asked what he would be pursuing if it wasn't for the beautiful game, jogo bonito in his native Brazil, Luquinhas didn't list any other career options.

"I can't imagine myself playing anything else but soccer," he said. 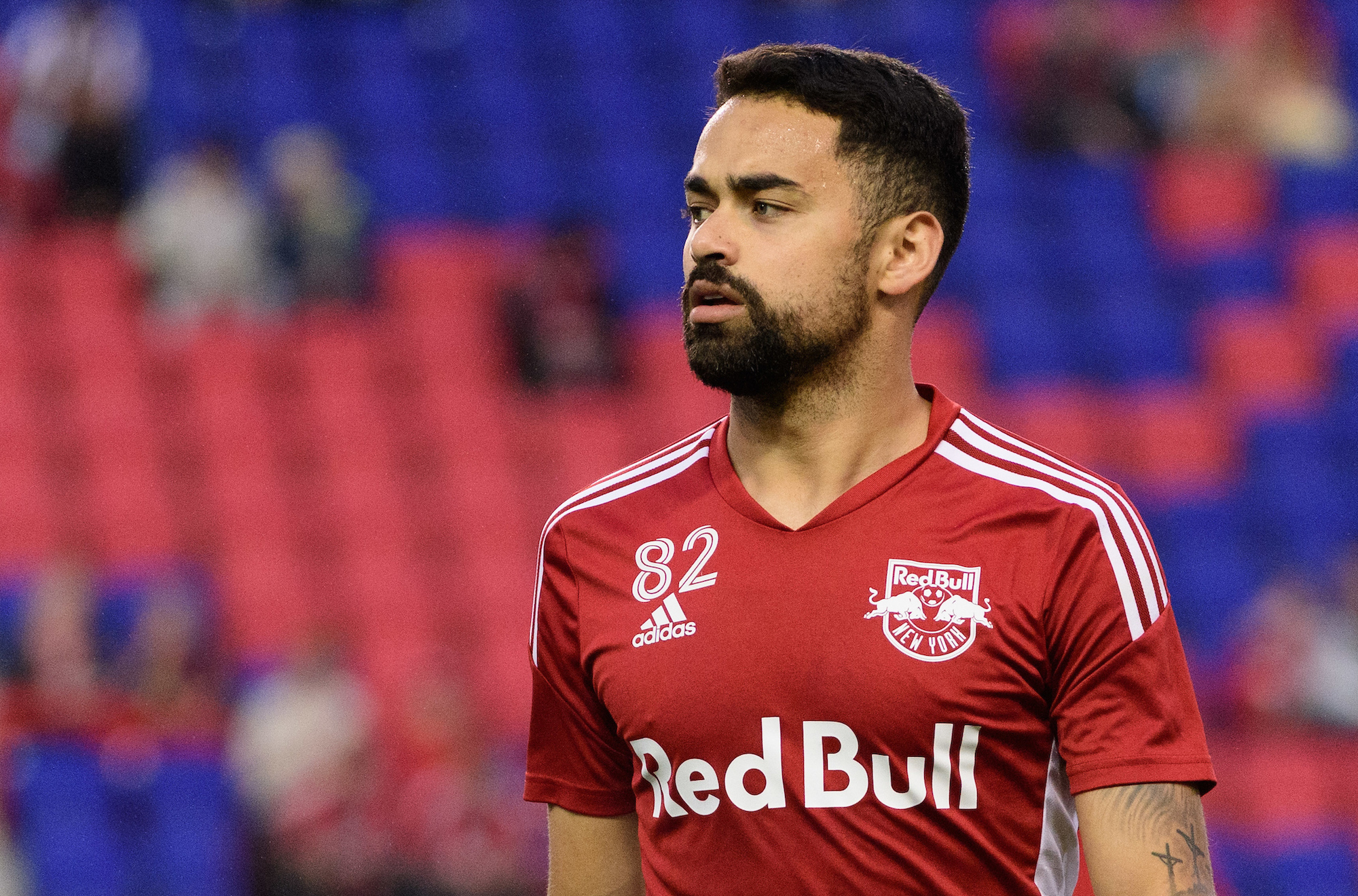 "Soccer in Brazil, it's a religion. We're all in love with the game and we all want to play," added the player, who’s been outstanding for the Red Bulls so far in the 2022 Open Cup with his unique ability to conjure spaces seemingly from thin air.

His comfort on the ball and devotion to the sport he loves has helped make him into the Red Bulls best attacking player this year. Entering the weekend of July 16, the 25-year-old has seven goals – several of them highlight-worthy. He also has five assists in 21 matches across all competitions.

Moreover, the brilliant Brazilian has become the undisputed fulcrum of the team's attack. 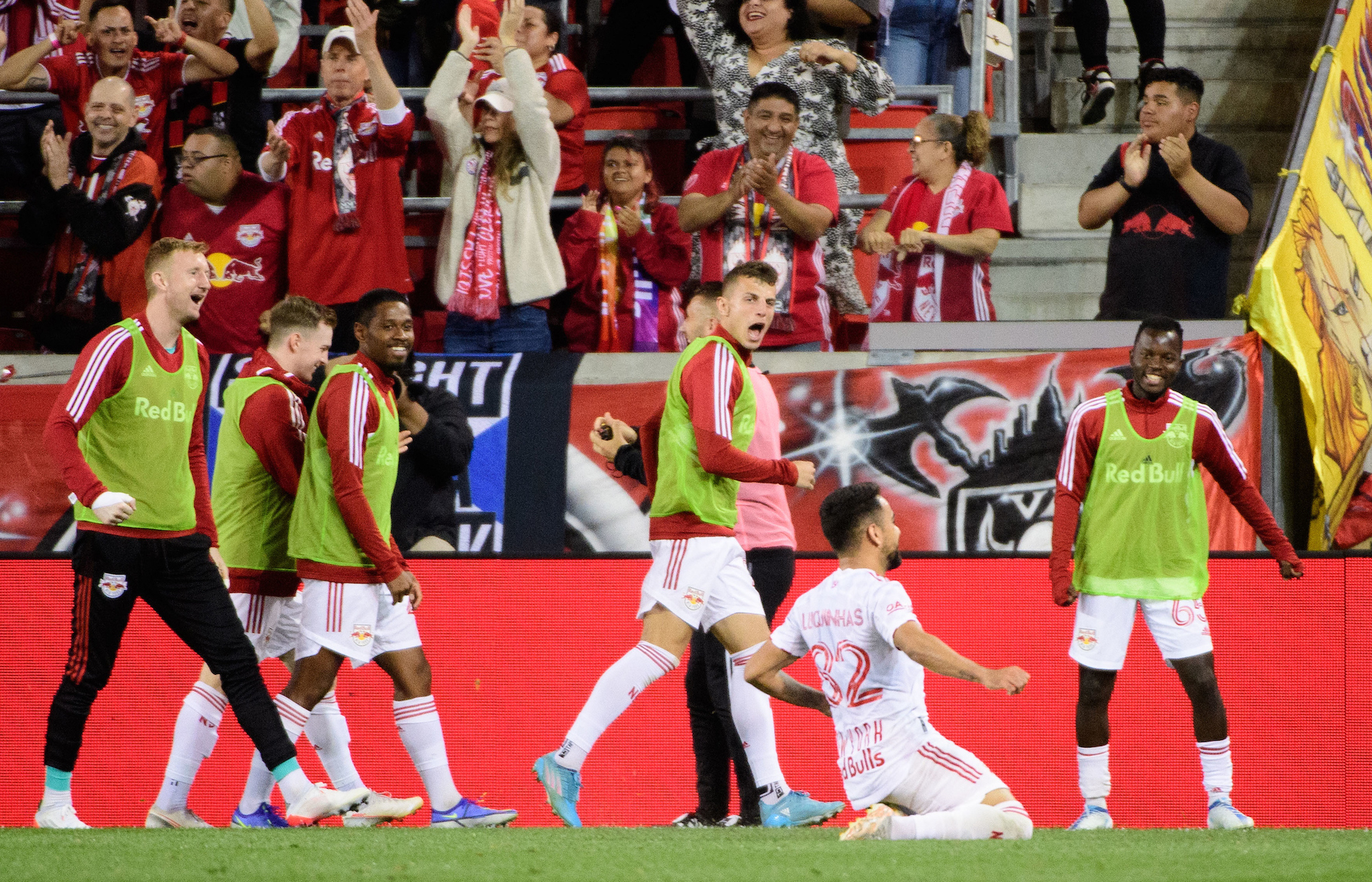 No one appreciates Luquinhas’ contributions more than Red Bulls head coach Gerhard Struber, who noted his midfielder's "outstanding dribbling moments" early on in his tenure.

"You can see his scoring ability [under] high pressure, how clean he is [finding] a teammate and how he’s ready to work on a high level,” said the 45-year-old Austrian. “He is for us a very, very important player…and he always has some surprises for the opponent.” 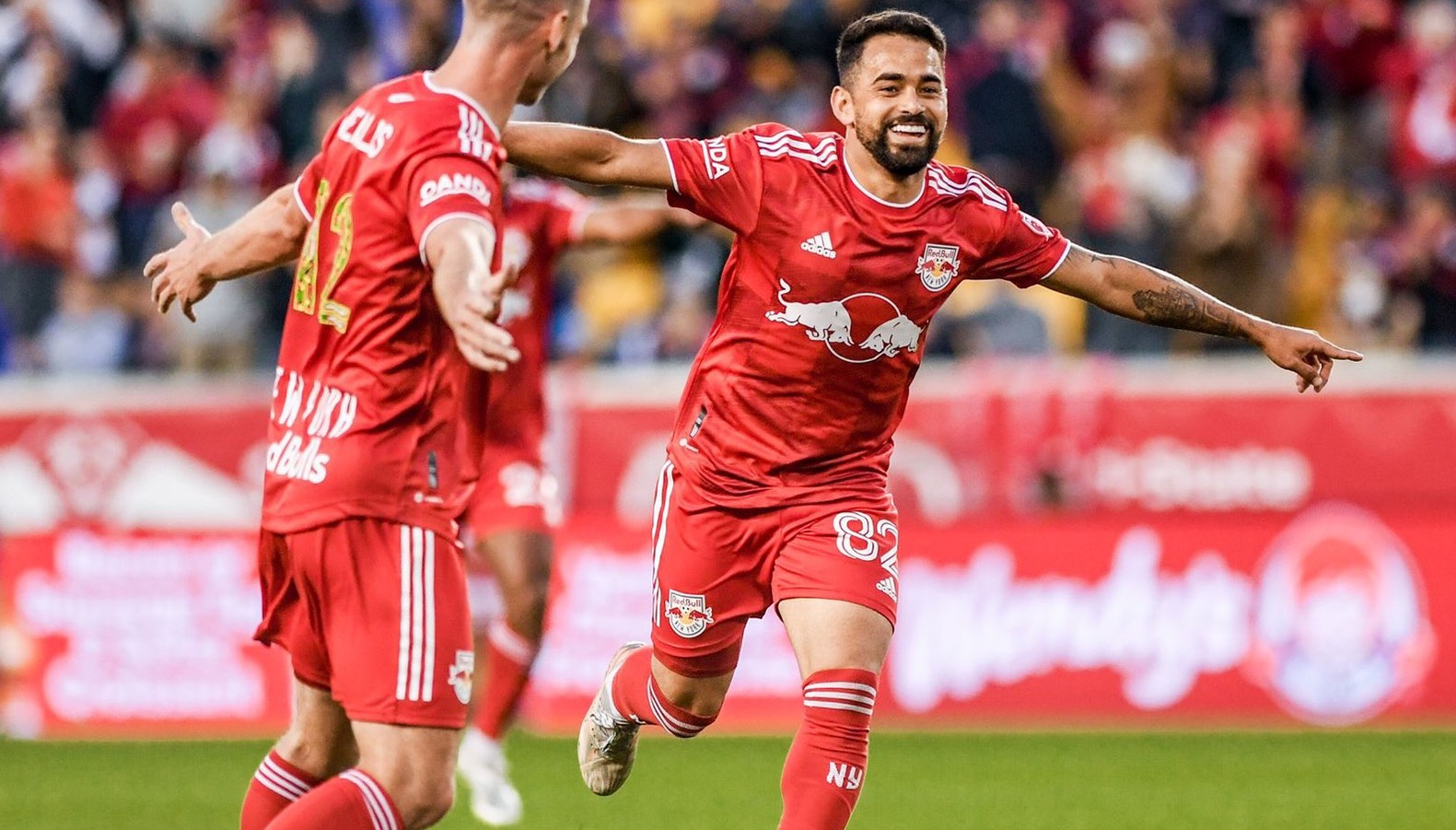 But with the ability to produce magic comes the downside of getting fouled on a regular basis, and sometimes the treatment can border on the brutal. Fouls come in different shapes, sizes and degrees of severity – from a push or a shove, to a kick or even the occasional malicious studs-up tackle.

Luquinhas has been fouled no fewer than 46 times in all competitions so far.

It all came to a head in the Red Bulls' 1-1 draw at FC Cincinnati on July 10, when the Brazilian was fouled five times, several of them them crunching tackles that kept him on the ground for a good while. Two of the fouls resulted in yellow cards.

Coach Struber felt Tyler Blackett's foul, when he took Luquinhas down just 90 seconds into the game, was worthy of a yellow card at least. But nothing came from the ref’s pocket.

“I have the feeling the refs are not brave enough [to book a player] after four or five minutes,” the coach said. “When they speak with us before the season, the referees always say to the coaches: 'We have one of our big goals to protect key players.’

“I know for us Luquinhas is a key player but maybe not for the refs," Struber added.

The officials will have their hands full, as always, when the Red Bulls visit Orlando City SC in a Lamar Hunt U.S. Open Cup Semifinal on July 27. The winner will play the victor of the Sacramento Republic FC-Sporting Kansas City contest in the tournament’s Final in September.

No one had to remind Luquinhas how vital it was for the Red Bulls to reach a Final and win a trophy. In their 27th season, the Red Bulls (previously known as the MetroStars) have never won an MLS or Open Cup.

"It would be very, very special for me because my goal is to win for the team," said Luquinhas, who has three assists and two goals in four Open Cup wins – including a stunning effort in a tense Quarterfinal against rivals New York City FC. "If we're able to win that first trophy, it will be an achievement that I will always, always cherish."

During the 2019-20 season in Poland, Luquinhas was able to cherish the first trophy of his professional career, helping Legia Warsaw to the Ekstraklasa crown. Legia duplicated that feat the next season and the Brazilian was named the league's midfielder of the year.

A cup-winner's medal has, thus far, proven beyond his grasp. But Luquinhas is hopeful he and his teammates will change that later this month in steamy Florida.

Born as Lucas Lima Linhares in Ceilândia, outside of the Brazilian capital of Brasilia in 1996, Luquinhas got his first chance to play professionally for Vilafranquense in Portugal’s second tier. He made the most of his opportunity too, scoring his first pro goal inside his first month and finishing with 17 in total during the 2015-16 campaign.

"It was an amazing experience," he said of his childhood ambition becoming reality. "It’s something that I've always dreamed about. To be able to score a goal not only as a professional but with the stadium being completely full. It was the best experience I've had."

The play is never over when Luquinhas is around the ball 🇧🇷🤙 pic.twitter.com/J1CQYTUh7z

Portuguese giants Benfica took note and he wound up playing on loan with their B team. After a stint with Aves and one more with Vilafranquense, another door opened when Legia Warsaw (of Poland) saw something in the then 23-year-old midfielder in 2019.

Two titles, two runs in the Europa League and some outstanding individual performances allowed the wider soccer universe to learn more about Luquinhas. And the Red Bulls came knocking earlier this year.

"My wife has always dreamed about living in the United States,” he said. “When the proposal came from the New York Red Bulls, I knew that it was the right decision for me and for my family."

And of course, it was the right decision for the Red Bulls.

After coming off the bench in three matches, Luquinhas started his first game in a 2-1 home loss to Montreal in April. He wasted no time setting up a goal in his full debut. Adapting to the Red Bulls style and culture fairly quickly, the player credits his teammates for his success.

That confidence has led to spectacular goals. Against the Philadelphia Union at Subaru Park in mid-May (With the Red Bulls a man down)  he nabbed a nifty goal off a nice combination with Cameron Harper for the 66th-minute equalizer in a 1-1 road draw. Then he added a brace in a 4-1 win over D.C. United on May 28, including a golazo volley in the 58th minute.

Perhaps his best tally came in a 2-0 home win over Toronto FC in June. Goalkeeper Quentin Westberg saved Tom Barlow's shot from the top of the box. As Westberg backpedaled toward his net, an alert Luquinhas chipped him and a defender for the 56th-minute insurance goal.

"I didn’t think twice," said the player whose strike in the Open Cup’s last round against NYCFC is up among the potential goals of the tournament. "When I saw the keeper out, right away, I knew I had to do it. It was quick thinking from me. I knew I had to hit it right away." 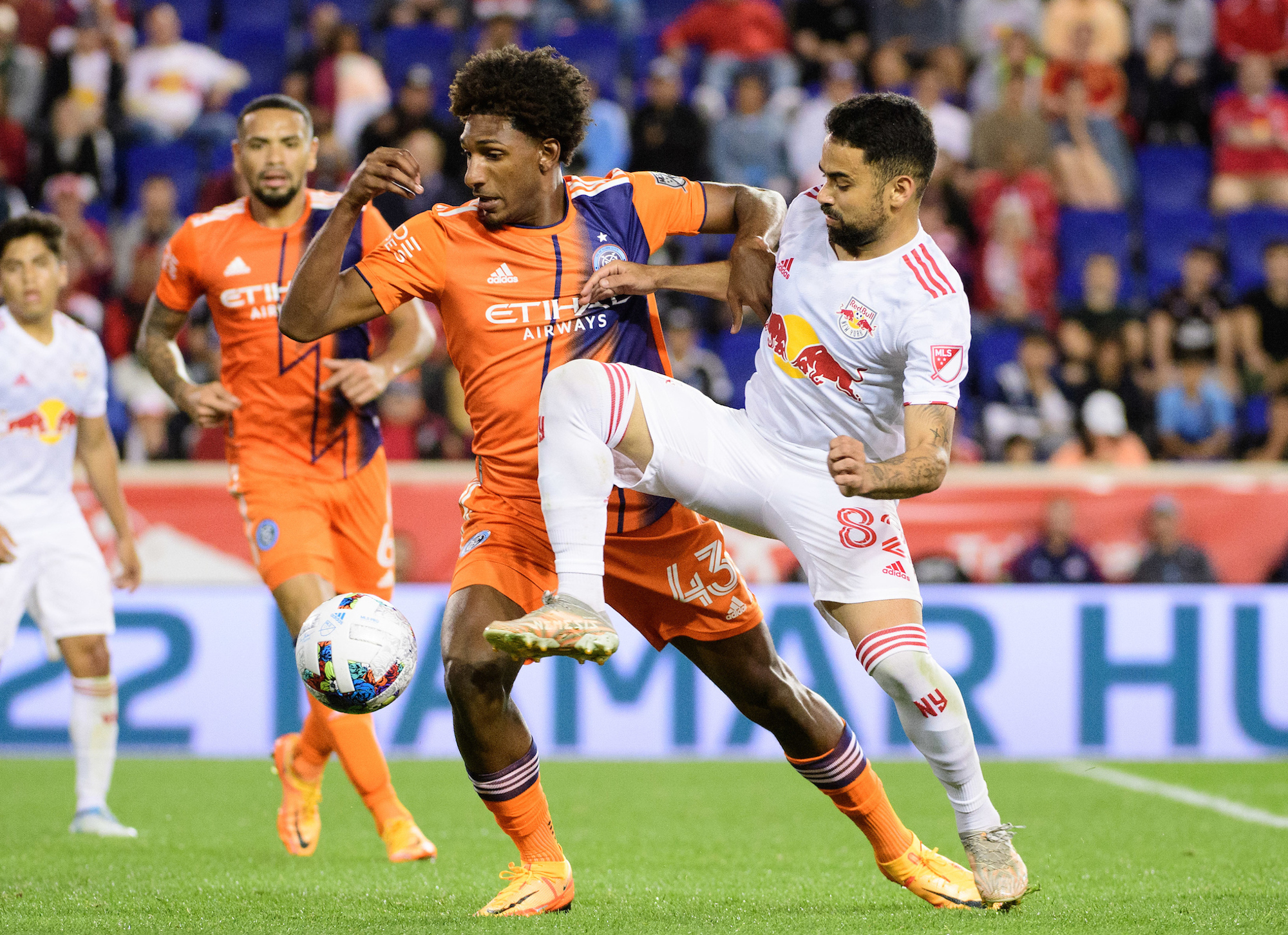 Luquinhas was named MLS player of the week – surprising no one. But somehow, he doesn't have a favorite goal.

"Honestly, every goal for me is special; it could be a good or bad goal," he laughed. "I'm always thankful for a very special goal. Some of the goals it's about the quality, but also the luck."

Luquinhas might be being a bit modest here because he’s demonstrated his brilliance consistently since taking up life in the USA – and he’s sent plenty of warnings that there’s very likely more to come.