Genesis & Renaissance: How a Former MLS Journeyman is Changing Worlds

Matt Fondy, co-founder of the soccer-based non-profit Oakland Genesis, was a Semifinalist with Chicago Fire in 2014 – and he’s still up for the Cup with ambitious amateur outfit Inter San Francisco.
Jonah FontelaOctober 12 2022
Open Cup

Matt Fondy is here to help.

Maybe you don’t remember his days in MLS. They were short – first with Chivas USA and then Chicago Fire. But the journeyman striker, the USL’s top-scorer and MVP in 2015 with Louisville City, is now tapping directly into the essence of the game he’s always loved.

“Toward the end of my pro career, I went from the pure love of the game to making choices based on business reasons – like you do with a job,” said Fondy, whose last stop in his decade as a pro landed him at Oakland Roots in 2020. “I wanted to reset my relationship with the game.”

That reset took the shape of a non-profit that harnesses the power of soccer, or football, whatever you care to call the world’s game. Oakland Genesis, which he started in 2019 with his college teammate Cody Pillon and aimed at the area’s underserved communities, is a club “where it’s free to play, with transportation provided and intense academic support, mentorship and coaching.”

Filling the Gaps with Soccer

Soccer is a “social tissue,” as Fondy describes it, and it's what makes Genesis tick. It starts with an after-school and rec program that serves over 1200 kids. From there, they can join an OG academy team. You get help on the field, with members of the Oakland Roots’ USL Championship side among the coaching staff, and in the classroom with the “academic coaches” (teachers, one per team). 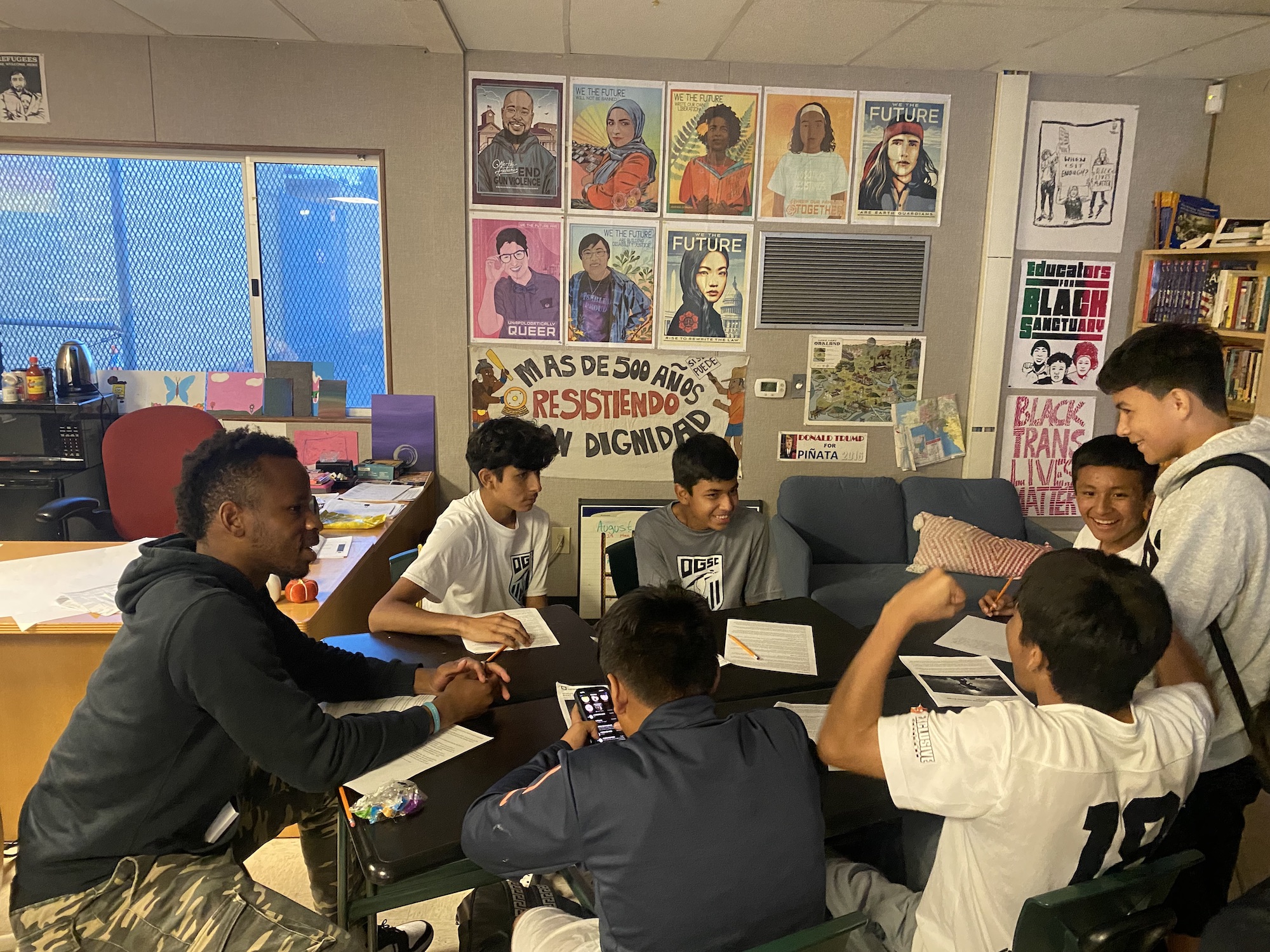 From a challenge to the pay-to-play system that dominates American youth sports, Genesis has grown into an organization that’s sewing a net to help catch those that might fall through all the cracks between right now and future successes. “Whenever a kid needs support or resources, we’re there,” Fondy said.

Its growth, from three teams in 2019 to eight this year, is evidence, direct and profound, of the power of soccer to empower and inspire. GPAs have gone up and Genesis teams now compete in the area’s NorCal Gold Division, with Fondy aiming to break into the Premier and MLS Next levels in the near future.

“It provides kids with a foundation to pursue their goals and I’m eager to both witness and be a small part of their journeys,” said San Jose Earthquake and former Portland Timbers striker Jeremy Ebobisse. One of the best young attackers in the country’s top-flight, he drops in at Genesis headquarters every week and does the most-important work of all, what Fondy calls “just showing up.”

Fondy is on a crusade. And he’s changing lives for the better. But that doesn’t mean he’s hung up his boots. He’s the oldest player in the newly established Inter San Francisco – a Men’s League team in the SFSFL currently through to the Second Round of Qualifying for the 2023 Open Cup.

Still Up for the Cup

“I love being out there playing the game,” said Fondy, who, at 33, still knows his way to goal. He scored twice in Inter’s rout of Marin County Union in the last round in September. “I love the mix of young players, college kids and ex pros from in and out of the States.”

Inter San Francisco is an amateur team with amateur-team problems. “We train once a week, in a perfect world, and people have a lot going on – with work and life,” said Fondy, who always seems to smile when talking about the game. “And it’s soccer, right, so you can win or lose on any day.”

He knows about both. The winning and the losing too. The ups and downs of what Fondy calls a “rollercoaster” career are too many to count. A college all-American, he came out of Division III UC Santa Cruz undrafted and on no one’s radar in 2010. He paid his way across the country for an open tryout with USL side Pittsburgh Riverhounds. “The airline lost our luggage, so I had to buy new cleats for the tryout and I was all blistered after,” Fondy laughed, remembering the day.

“But I balled out. I played great,” he added with a chuckle. “And I signed a four-figure salary contract.”

There were more threadbare contracts before he made it to MLS. He lived with eight other players in his one season in Pittsburgh. There was the high of assisting American soccer legend Chris Wondolowski in a pre-season friendly with the Quakes, before the low of being released on the last day of camp.

“I was trying to decide if I should keep doing it,” he said of the days before a return to the USL, and the Los Angeles Blues, where something just clicked. “I scored ten goals in ten games and that was it.”

Goals get you noticed. And Fondy signed, in 2013, with Chivas USA. He spent nearly two seasons there and a half more with Chicago Fire, where he played in the 2014 Open Cup Semi against eventual champions the Sounders.

“They smashed us,” he said looking back on the 6-0 loss and that epic Sounders team, who the Fire faced after Fondy set up the gamer-winner in the Quarterfinal against the Atlanta Silverbacks. “[Clint] Dempsey and Obafemi Martins. They were so stacked, but it was still super-fun being on that run.”

Fondy had his best season as a pro in Louisville, Kentucky, after being released by the Fire. He finished the 2015 USL season as the league’s MVP and top-scorer. And still with dreams of a place in the U.S. National Team and, eventually, a return to MLS, Fondy made a decision he regrets.

“If I was making choices based on the love of the game, and where I was happy, I would have stayed in Kentucky,” he said. “But I didn’t.”

No matter how short his stay, a door opened in Louisville that would forever change Fondy’s life – and the lives of so many kids in Oakland. “I did an appearance that really inspired there, at a refugee ministry,” he recalled. “We were using the game of soccer to connect with kids. They’re English wasn’t great, but we all spoke the language of soccer.”

A New Road Ahead

He saw “the power of the game to connect communities.” At his next stop as a pro, in North Carolina, he started his own program working with the U.S. Committee for Refugees and Immigrants. Bouncing from club to club, he also saw the challenges some of his teammates faced as they scraped out a living in the game. “I was able to access soccer, pay the fees, get the transportation and the cleats as a kid,” he said of his own experience. “But the stories of some of my teammates, from Honduras and Nigeria, or who grew up under apartheid in South Africa – they opened my eyes.

Fondy started making use of his spare time. “I wasn’t a great student in college but I wanted to dig into things deeper,” he said. “I started taking classes and studying. It became a passion.”

But there’s a problem here. The more Oakland Genesis becomes what he calls the “kind of resource we want to be,” the less Fondy can be out on the field.

“I’m still hanging on,” said Fondy, who insists on coaching one of the boys’ academy teams while slowly being dragged indoors in his role as Genesis’ chief fund-rasier and co-executive director.

He just can’t imagine a weekend without a game. A chance to take aim at a goal. And you can just see it, the wheels turning in his head to a future where it all might come together in a perfect symmetry.

“It’s not too far off. An Oakland Genesis team in the Open Cup? Absolutely,” said Fondy with a big grin. “Once these kids grow up a little and, hopefully I’m not too old, I’ll play with them.

You get the sense he means it too.