The U.S. Women’s National Team is set to play its penultimate match of 2022, taking on Germany at 7 p.m. ET on Nov. 10 at DRV PNK Stadium in Fort Lauderdale, Florida. The match will be broadcast on FS1 and is the first of two meetings in a four-day span between the USA and Germany. The USWNT, ranked No. 1 in the latest FIFA World Rankings, will take on Germany, runners-up at this summer’s Women’s EURO and the third-ranked team in the world, to close out the calendar year.

The games against Germany continue a highly competitive fall for the USWNT, which will play its final eight games of the year against teams that have qualified for the 2023 FIFA Women’s World Cup, which kicks off in just over eight months. Since the knockout rounds of the Concacaf W Championship, the USA has played Costa Rica and Canada, both of whom will also represent the region in New Zealand and Australia, played two games against perennial African power Nigeria and traveled to Europe for matches against England and Spain, both of whom are amongst the favorites to win the tournament. The USA, which has won a record four FIFA Women’s World Cup titles, enters Thursday’s game in Florida on a 71-game home unbeaten streak, the second-longest such streak in program history.

Following the match on Thursday night, the teams will travel to Harrison, N.J. where they will play again on Sunday, Nov. 13 at Red Bull Arena (5 p.m. ET on ESPN). Fans will also be able to follow the action via Twitter (@USWNT), Instagram (@USWNT), Facebook and the official U.S. Soccer App.

The 24-player roster for these matches against Germany features 20 players who took part in the European Tour in October, including now 18-year-old Alyssa Thompson, who made her international debut on Oct. 7 against England to become the youngest player to earn a first cap for the USWNT since 2016. Thompson, who became the 70th teenager all-time to appear for the USWNT, celebrated her 18th birthday on Monday. Returning to this roster are forwards and NWSL MVP candidates Alex Morgan and Mallory Pugh, both of whom were unable to participate in the October camp but bring a wealth of international experience and attacking flair to this roster. Taylor Kornieck is back in the midfield while goalkeeper Adrianna Franch earns her first call-up since October 2021 after a stellar season with the Kansas City Current in which she collected NWSL Best XI Second Team honors while leading the club to the NWSL Championship Game. Defender Emily Fox is also back in the squad after suffering an injury in the opening stages of the Oct. 7 match against England that kept out of action for the Oct. 11 game in Spain.

Alex Morgan heads into these matches against Germany on 198 career caps, two away from becoming just the 13th player in USWNT history to reach the 200-cap milestone. Since making her international debut in March 2010, Morgan has tallied 119 goals and 46 assists in her 198 international appearances, good for fifth on the USA’s all-time scoring charts and 11th in assists. Should Morgan appearance in both matches against Germany, she could reach the milestone in the Nov. 13 match at Red Bull Arena and become just the sixth active player in the world with 200 caps, joining her USWNT teammate Becky Sauerbrunn, who reached the milestone in February of this year, along with Canada’s Christine Sinclair and Sophie Schmidt, Sweden’s Caroline Seger and Sherida Spitse from the Netherlands.

BACK IN THE SUNSHINE STATE

After a pair of hard-fought defeats in Europe, the USWNT looks to return to its winning ways on home soil, where it is working on a 71-game home unbeaten streak and has gone over five years without a home loss. This is the second-longest home unbeaten streak in USWNT history, the longest lasting 104 games from December of 2004 to December of 2015.

During this home unbeaten streak, the USA has outscored its opponents 266-29, including a 136-5 margin during its last 33 matches at home, all of which have been wins save for the 0-0 draws with Czech Republic on Feb. 17 and with Korea Republic on Oct. 21, 2021.

Thursday’s match in Fort Lauderdale will be the 38th game all-time for the USA in the state of Florida, where it holds an all-time record of 33-3-1. The United States has won 19 consecutive matches in Florida, outscoring opponents, 60-6, in those games and will be playing its first match in the state since the 2021 SheBelieves Cup in Orlando.

The USA and Germany have played 33 times previously with the USWNT leading the overall series 22-4-7. Despite the long history between the teams – which dates back to 1988 – this will be the first meeting between the sides since 2018, when the teams met on March 1 in the SheBelieves Cup. The USA won 1-0 behind a 17th minute goal from Megan Rapinoe on a snowy and windy night in Columbus, Ohio on the first match day of the tournament.The gap of more than four years between meetings is the longest in the history between the two countries.

The last three meetings between the USA and Germany all came during the SheBelieves Cup, with the teams meeting during the 2016, 2017 and 2018 editions of the tournament. The USA won all three matchups – and is unbeaten in the last 15 head-to-head meetings with Germany – though all three games were decided by just one goal. In 2016, the USA won 2-1 behind goals from Alex Morgan and Samantha Mewis, followed by a 1-0 victory in 2017 behind a game-winner from Lynn Williams.

Thursday’s game in Fort Lauderdale will be the 17th meeting between the teams on U.S. soil, where the USA has a record a 11-2-3 in the previous 16 meetings.

Germany will be the fifth different European opponent the USA has faced this year and the ninth since the start of 2021, having played Sweden twice during that span and the Netherlands, Portugal, France, Czech Republic, Iceland, England and Spain once each.

Ranked No. 3 in the world in the latest FIFA rankings, Germany is the highest-ranked opponent the USA has faced this year and the highest-ranked foe for the top-ranked Americans since playing third-ranked France in April of 2021. The USA won that match in Le Havre on April 13, 2021, 2-0, behind goals from Alex Morgan and Megan Rapinoe.

When the calendar turns to 2023, the eyes of the U.S. Women’s National Team – and the footballing world – will shift to Australia and New Zealand for the fast-approaching 2023 FIFA Women’s World Cup. The USA will kick off the new year with incredibly valuable preparations for the World Cup as it will hold its annual January Training Camp in New Zealand and play two matches against the Football Ferns.

The January matches will be the first ever games for the USA in New Zealand and both games will be played at the venues which just six months later will host all three of the USWNT group games at the 2023 FIFA Women’s World Cup.

On October 22 at the Women’s World Cup Final Draw in Auckland/Tāmaki Makaurau, the USA was placed into Group E, which meant it would face Vietnam on July 22 at Eden Park, the Netherlands on July 27 at Sky Stadium and the Group A Playoff Winner on Aug. 1 back at Eden Park.

The 2023 Women’s World Cup Final Draw took place on Oct. 22 in Auckland and place drew the expanded field of 32 teams into eight group, setting the pathway and schedule for the tournament. The tournament will open on July 20 as co-host New Zealand takes on Norway in Auckland/Tāmaki Makaurau. An hour later, co-host Australia opens against the Republic of Ireland in Sydney/Gadigal. The full tournament schedule along with kickoff times can be found here.

The USA will face World Cup debutant Vietnam, Netherlands and the Group A Playoff Winner -- either Portugal, Thailand or Cameroon -- in Group E, playing the entirety of the group stage in New Zealand. The U.S. will open Group E play against Vietnam on July 22 at Eden Park in Auckland/Tāmaki Makaurau and then face the Netherlands on July 27 at Wellington Regional Stadium – also known as Sky Stadium - in Wellington/Te Whanganui-a-Tara, marking the first time in FIFA Women’s World Cup history that the two finalists from the previous tournament will meet in group play. The USA will then close out the group stage against the Group A Playoff Winner on Aug. 1 at Eden Park in Auckland/Tāmaki Makaurau.

The Inter-Confederation Playoffs will determine the final three qualification spots for the 2023 FIFA Women's World Cup, including the USA’s final opponent for the group stage. The ten-team playoff tournament will take place in New Zealand from February 17-23, 2023 and features ten nations split into three groups, with the winner of each group qualifying for the Women's World Cup. Group A will feature Cameroon against Thailand on Feb. 18 with the winner taking on Portugal for a berth to the World Cup on Feb. 22.

Single match passes are available between now and March 3rd via FIFA’s ticketing portalon a first come, first serve basis. Prices will start at AUD/NZD$20 for adults and AUD/NZD$10 for children. For more information about the 2023 FIFA Women’s World Cup visit the FIFA’s 2023 World Cup hub. 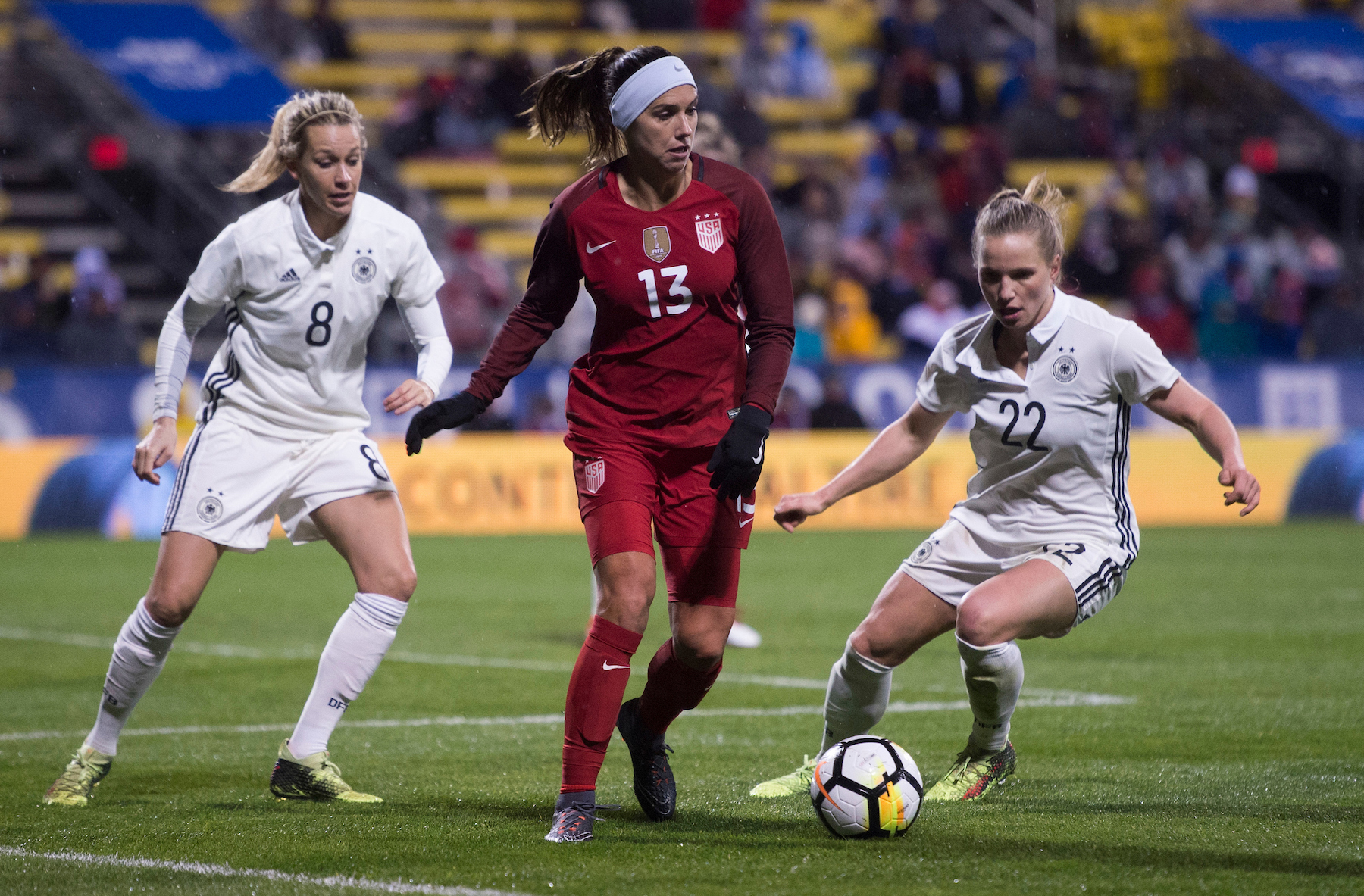