Here are five things you should know going into the match:

How Do You Take Three Points in Away World Cup Qualifying?

The global mantra for World Cup Qualifying is to win your home games and pick up points on the road. Almost unfailingly, any National Team that follows that path will find themselves as one of the final 32 nations every World Cup cycle.

While the challenges remain, the U.S. has proven adept at finding ways to get results away from home every cycle, and even though all nine matches between these teams in Port of Spain have been decided by a goal or less, the path to success is a familiar one.

“The blueprint is always pretty similar,” said U.S. captain Michael Bradley. “It’s having to be organized and committed, making sure we don’t give too much away and knowing at some point we’ll get some chances. They could come on set pieces, they could come on counter attacks, they could come through good football ... however they come, we have to be ready to take advantage. In games like this, there’s not going to be a million chances and so it’s important that we’re concentrated for 90 minutes and ready to do things we need to make the game harder on the other team.”

Health of the Team

Aside from the goal in the fifth minute, things went mostly according to plan for the U.S. in Friday’s 6-1 win against St. Vincent and the Grenadines. That was until Jermaine Jones appeared to pick up an injury late in the match, which saw him move from midfielder to center back for the game’s closing minutes.

As the U.S. left St. Louis, there was obvious concern for Jones’ health ahead of Tuesday’s game against Trinidad & Tobago, but it appears the veteran midfielder is ready to play against the Soca Warriors. Asked in Monday’s press conference how Jones was, MNT head coach Jurgen Klinsmann said that his entire team was fit to face Trinidad & Tobago.

While coaches understandably keep their lineups under lock and key prior to any big international match, Klinsmann said at the start of camp that veteran ‘keeper Tim Howard would play in Tuesday’s game against Trinidad & Tobago as part of the coach’s goalkeeping rotation with Brad Guzan.

With his appearance Tuesday night, Howard will become just the 10th U.S. player to play in 30 World Cup Qualifying matches for the U.S., tying Cobi Jones and Earnie Stewart for eighth all-time.

With a 21-6-2 record, Howard holds the most wins of any goalkeeper in World Cup Qualifying. With 12 clean sheets, he sits second behind only Kasey Keller (19).

A near constant in Jurgen Klinsmann’s lineup during the year, Gyasi Zardes has been one of the brightest youngsters to arrive on the U.S. Men’s National Team scene in 2015. The LA Galaxy attacker has played in 18 of 19 of the team’s matches this year, having only missed the Gold Cup Third Place game against Panama. Should he appear in Tuesday night’s match, he would tie former U.S. captain Claudio Reyna for most appearances by a player in their debut year with the MNT.

Told of the potential milestone on Monday, Zardes was thankful for the opportunities he’s been given in his first year with the U.S.

“Reaching a milestone like this one, debuting and playing in almost every game is just phenomenal,” he told ussoccer.com. “It’s crazy to think about. It’s a blessing to represent your country and constantly play. Jurgen has confidence in me and I’m trying to learn as much as I can so I can become a better player and work extremely hard so I continue to get called into these camps and represent my country.

“Hard work goes a long way,” he continued. “It’s motivating. It makes me want to work even harder.”

Coming off his brace in Friday’s 6-1 win against St. Vincent and the Grenadines, Jozy Altidore will celebrate the eight-year anniversary of his first MNT cap.

Just 18 at the time, Altidore (pictured below) was a halftime substitute for Clint Dempsey in the MNT’s 1-0 victory against South Africa at the Nelson Mandela Challenge Cup in Johannesburg on Nov. 17, 2007.

Having amassed 88 appearances since 2007, Altidore looks to be the next U.S. player to hit the century mark for caps. With 31 career goals, Altidore ranks fourth all-time for the U.S., behind only Eric Wynalda (34), Clint Dempsey (48) and Landon Donovan (57), while his double on Friday against St. Vincent was the fifth multi-goal game of his career. 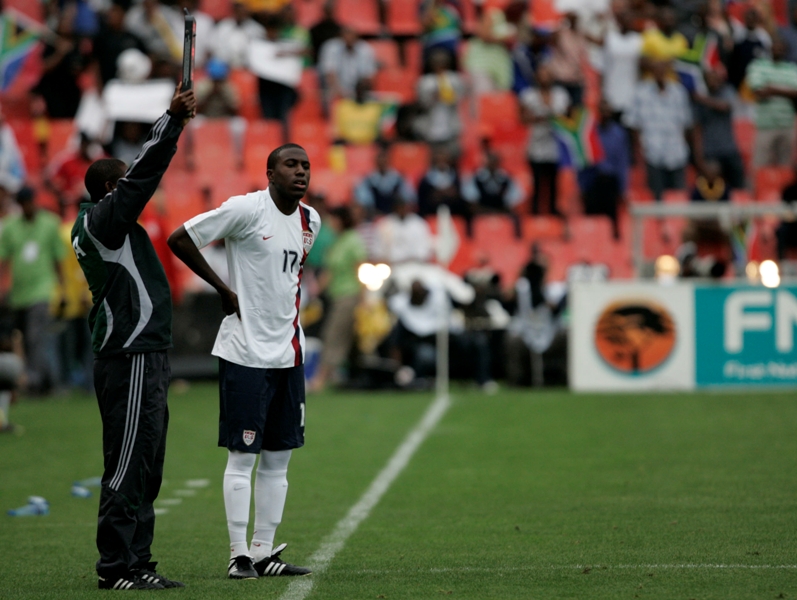