Today, 41 cities are taking the next step towards being a part of the 2026 FIFA World Cup™ by submitting their bids to become Official Host Cities. The candidate cities span diverse geography across three North American nations, and are united in their commitment to the sport and its future. If the United Bid of Canada, Mexico and the United States is selected, at least 12 of these cities could serve as hosts for the historic 2026 tournament, the first-ever to feature 48 teams.

Last month, the United Bid Committee reached out to 44 cities across the continent with an invitation to bid to become hosts. Forty-one have answered the call to be a part of the world’s biggest single-event sporting competition, the FIFA World Cup. Later this Fall, the United Bid Committee will release a shortlist of the cities moving on in the bid process. Their stadiums, infrastructure and more will be held to the highest standards in the Bid Committee’s decision process. Beyond logistics, each city will aim to demonstrate the Bid’s united theme.

In the U.S. heartland, a bid was never in doubt for Kansas City. KC was one of the first to submit its bid, delivered by hand to New York. The enthusiasm shows how far the city has come in becoming the self-proclaimed “Soccer Capital of America.”

“There’s probably no greater transformation of a city and its support for soccer than what we’ve done here in Kansas City,” said David Ficklin, Sporting KC Vice President of Development. “We’ve got a quarter-billion dollars invested in soccer facilities. We have a professional team at the top of the pyramid of a thriving soccer community that’s growing and building youth field after youth field after youth field.”

Ten years ago, there was minimal interest in soccer in Kansas City. The city’s professional team, then known as the Wizards, finished 19th out of 18 teams in MLS merchandise sales. Products bearing the league crest sold more. Fast forward to August 19, 2017 when Sporting KC’s most-recent home match marked its 100th consecutive sell-out at Children’s Mercy Park. Kansas City sports fans used to discuss the legitimacy of the sport, now they debate whether Benny Feilhaber deserves a spot on the latest Men’s National Team roster.

“There’s probably no other city, state or region that exemplifies the united efforts of what we see here in Kansas City,” Ficklin said. “We’ve got a whole region that lives the game… When you think about our investment in facilities, our investment in Arrowhead Stadium, as a region we’ve been preparing for this for the last decade.” 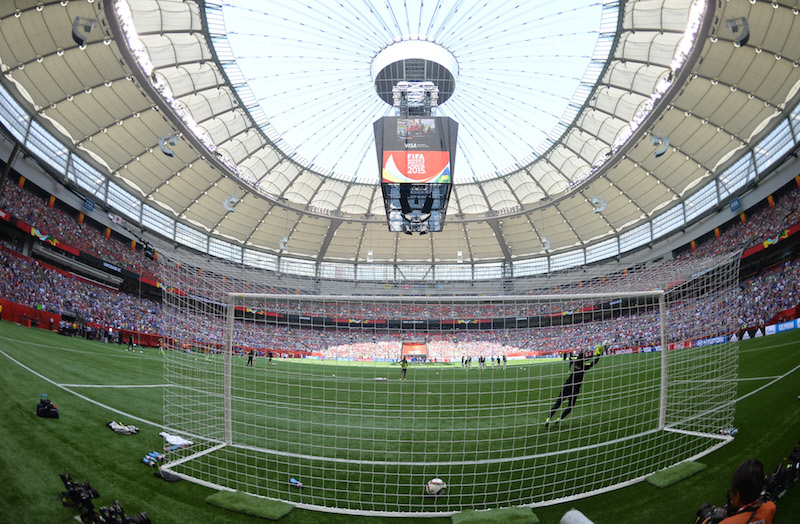 WELCOMING THE WORLD IN VANCOUVER
The most recent FIFA competition on United Bid soil came two summers ago in Canada at the FIFA Women’s World Cup Canada 2015™. The event was an unprecedented success, smashing attendance records throughout its run and cementing soccer as the highest-participation sport in Canada. Nine matches, including the Final, were hosted at Vancouver’s BC Place. The city is the most-recent North American host of the world’s biggest winter sporting event, the Olympic Games, as the Rain City was home to the 2010 Winter Olympics. Now, it’s ready to offer its services for the FIFA World Cup.

“Vancouver is perfectly positioned to host this global event as an Olympic city that has proven excellence in accommodating the most popular sporting events in the world,” said Mayor Gregor Robertson, HCBAG United 2026 Honorary Chairperson. “We welcome the opportunity to highlight our diversity within and outside our soccer cultures as the world joins us in celebrating its favorite game.”

The British Columbian city is also prepared for events beyond matches. It hosted the most-successful Fan Zone in FIFA Women’s World Cup history with 135,000 attendees during its 13-day run.

Vancouver is one of Canada’s most diverse cities. Nearly half the population’s mother tongue is a language other than English. Its bid promises inclusion for each individual involved.

“We will continue to support and strengthen soccer in our city and beyond, and to promote the game as a means of transcending culture, politics and social agendas by bringing people together in a shared love for the sport,” said Michelle Collens, Sport Hosting Vancouver Senior Manager. “We are a welcoming community that is as diverse and multicultural as it is united.”

An epicenter of soccer culture in a soccer-crazed nation, Guadalajara is home to C.D. Guadalajara, better known as Chivas, one of Mexico’s, and the world’s, most popular clubs. The city hosted Quarterfinal and Semifinal matches for two memorable FIFA World Cups in 1970 and 1986. In 1970, Guadalajara played host to perhaps the greatest team in World Cup history, Pelé’s final Brazil squad. 1986’s competition is best remembered for Argentina’s Diego Maradona’s historic “Hand of God” goal.

2026 would mark a historic third time hosting for Mexico and potentially, Guadalajara. Estadio Chivas is a modern, sustainable marvel that fills with nearly 50,000 fans every matchday. Located in the center of a range of volcanoes, the stadium channels its surroundings with a design that evokes erupting smoke. The stadium’s environmental assimilation reflects an integrated, united experience in a vibrant metropolitan area.

“The overall sense of experience around the city can be lived through any sense of your body,” said  José María Aldrete González, Subdirector of Sports Business Operations at Omnilife. “What you touch, what you see, what you taste, what you hear, what you smell will become part of you, as a rich and whole experience.”

These three cities, and the 38 others to submit bids, will compete for inclusion in the United Bid’s final submission to FIFA, which is due by March 16, 2018. Kansas City offers a microcosm of soccer’s explosion in the United States. The City of Fountains brings together the entire central region of the country in its bid. Fifty-five million people across the prairie states are within a day's drive of its Arrowhead Stadium. Vancouver has played host to the world’s sporting competitions several times over in the last decade as one of Canada’s most global and diverse cities. Soccer is integrated in the character of Guadalajara, a hotbed of the sport in one of the world’s most soccer-crazed nations.  These three cities- and 38 others- will make it a battle for inclusion on the Bid Committee’s shortlist later this Fall.