When the U.S. Men’s National Team’s fall Kickoff Series was announced, the intention was to give the side’s younger generation six top-tier matches at the official beginning of the new World Cup cycle. And while games against Brazil, Mexico, Colombia, Peru and Italy all provided interest, the specter of playing England at historic Wembley Stadium stuck out most, especially for two members of the player pool.

Respectively, MNT defenders Cameron Carter-Vickers and Antonee Robinson hail from Southend-on-Sea and Liverpool, England. They developed through long-time Premier League clubs Tottenham Hotspur and Everton. While they’re proud to represent the United States, so much of their football experience comes from the English system, one where the idea of playing at Wembley is a dream.

“When I think of Wembley, what comes to mind is that it’s a massive stadium where all the big games are – cup games, promotion and England internationals,” Robinson said. “Games there mean a lot.”

“A CATHEDRAL OF FOOTBALL” 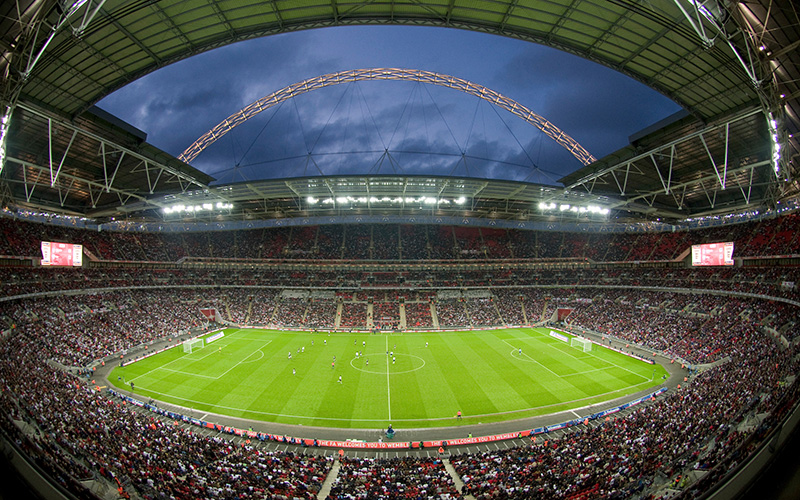 Wembley Stadium – both the original and the latest incarnation - has long been the principle home for England’s international matches, most famously for the Three Lions’ World Cup-winning run in 1966. FA Cup Finals, promotion playoff finals and other high-profile matches were played there and continued when the modern structure that stands today opened in 2007.

While especially meaningful to England players and fans, the stadium has worldwide acclaim. Legendary Brazilian football Pele once proclaimed, “Wembley is the cathedral of football. It is the capital of football and it is the heart of football.”

Currently on loan with Swansea in the English Championship, Carter-Vickers has been part of the Tottenham Hotspur matchday squad at Wembley for UEFA Champions League games. More recently, the club has taken up temporary residence before their new stadium opens in 2019.

“I’ve been on the bench there a few times with Tottenham and I’ve been to watch a few games with my mum and my family,” Carter-Vickers said. “I kind of know what it’s like. When the stadium is full, it’s a great atmosphere. As a fan, if your team is playing there you know it’s an important match.”

While Carter-Vickers has taken in the Wembley experience multiple times, Robinson will take his first steps into the vaunted ground this week. It wasn’t planned that way. Two years ago, the Everton product was meant to attend the club’s FA Cup Semifinal there against Manchester United, but had had to stay back in Liverpool due to illness.

Missing out on that experience may prove a blessing, as it sets up the possibility that the 21-year-old’s first trip to Wembley could come representing the USA against the country of his birth.

“Ever since I was a kid I wanted to play at Wembley,” he said. “At international level, to be playing there against England will be a proud moment for me, a proud moment for my family and everyone that has played a part in me getting to this point. I’ve been excited for it ever since the fixture was announced and I’m hoping I get to play because it’s a massive opportunity.”

FAMILY, EMOTIONS AND THE ANTHEMS

While excited to see their teammates, their arrival at the team hotel on Sunday also began the process of securing a larger amount of tickets for the match.

“I think I need at least 10,” said Carter-Vickers.

As Thursday’s match represents a special opportunity in their young careers, it will also provide an amazing moment for their families. Set for his first Wembley experience, the match could also mark the first time Robinson’s family will see him represent the United States in person.

Will they have split loyalty? Will they cheer for England?

“I don’t think it’s going to be hard for my family. They won’t even be watching the game, they’ll just be focusing in and rooting for me. They’ll have my past game jerseys on for sure.” 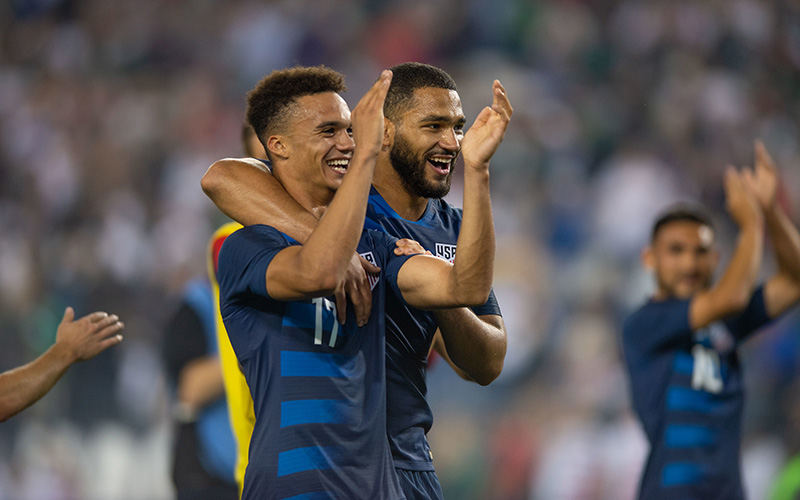 Geraldine Vickers flew with his grandmother to see Cameron play against France earlier this year in Lyon. With her son having represented the USA at two U-20 World Cups, she’s been well-versed in cheering for the U.S., though Cameron says some of the other folks he needs tickets for may have a harder time.

“I hope they’re all pulling for the USA!,” Carter-Vickers said. “I know my mum and my nan will be, but maybe my auntie will have a harder time.”

Split loyalties with family aside, the experience should come full circle for both players once the national anthems play.

“We both know both national anthems very well and they both have a meaning to us,” Carter-Vickers said. “It will definitely be a weird experience when they both play.”

But, Robinson added, “There’s no question about which one we’ll be singing.”