List of Candidate Host Cities Released in Advance of Final Bid Submission to FIFA; Entire Bid will be Submitted to FIFA on Friday in Zurich; United Bid Projects 5.8 Million Tickets to be Sold in 2026, Generating $2.1 Billion in Revenue.
March 15 2018

NEW YORK (March 15, 2018) – On the eve of submitting its bid to FIFA to host the 2026 FIFA World Cup™, the United Bid announced its list of 23 Candidate Host Cities that will be included in the Bid Book.

The number and diversity of cities in Canada, Mexico and the United States represent the most comprehensive and far-reaching hosting strategy ever developed for a mega-sporting event. It further demonstrates the United Bid’s commitment to welcoming the world to a united and inclusive celebration of football where every one of the 48 teams will be playing in some of the world’s largest and most advanced facilities.

The full list of Candidate Host Cities can be found below. 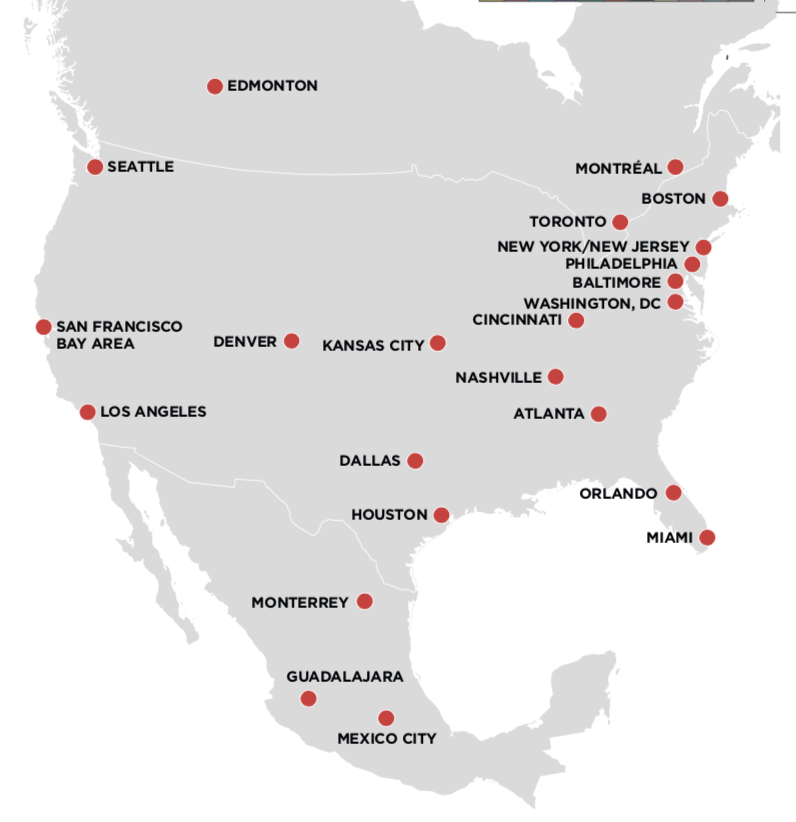 The United Bid offers FIFA more than the required number of qualified Candidate Host Cities and stadiums to be considered as part of a final Host City evaluation and selection process. If the 2026 FIFA World Cup™ is awarded to the United Bid, FIFA will select up to 16 Host Cities from the proposed slate of 23.

Canada, Mexico, and the United States require no new stadium construction to stage the 2026 FIFA World Cup™. The United Bid will instead be able to work with FIFA to ensure the players, officials, and fans have an extraordinary experience at the largest FIFA World Cup™ ever staged.

“Canada, Mexico, and the United States have joined together to deliver a United Bid that offers FIFA and its member associations the power of unity, the promise of certainty, and the potential of extraordinary opportunity,” said John Kristick, Executive Director of the United Bid. “We are confident that the combination of our 23 existing world-class stadiums, 150 existing elite training facilities, and our modern and interconnected transportation network can help FIFA to achieve new records for attendance and revenue, which will allow the entire global football community to improve and grow.”

“The United Bid is honoured to present to FIFA a bid that symbolizes the collective efforts of our three countries and our 23 Candidate Host Cities that have the demonstrated history and ability to stage the newly expanded 2026 FIFA World Cup™. As stewards for the world’s largest sporting event, our diverse and inclusive cultures will welcome all players, officials and fans in celebration of the game in North America and around the world,” said Peter Montopoli, Canada Bid Director and General Secretary, Canada Soccer.

“We’re even more confident we have everything needed to deliver the largest, most compelling FIFA World Cup™ in history and help accelerate the growth of football across North America and around the world,” said Yon de Luisa, Mexico Bid Director.

Across every metric – including ticket sales, television audiences and rights fees, digital engagement, partner involvement, community support, environmental, social and economic impact – the 2026 FIFA World Cup™ in North America has the potential to deliver extraordinary success for FIFA and for football.

- Each of the stadiums included in the United Bid’s proposal are already built and have an average capacity of more than 68,000.

- All of the Candidate Host Cities feature modern and interconnected transportation networks, a variety of world-class accommodations, media and technology infrastructure, and provide the certainty needed to ensure a smooth and prosperous FIFA World Cup™.

The United Bid’s hosting vision and strategy projects more than 5.8 million tickets will be sold, generating in excess of $2 billion in ticketing revenue and ensuring every stadium for every match will be filled with passionate supporters from around the world. With over 200 ethnic groups and 300 languages spoken in our three countries, every team and their fans will feel at home.

With the opportunity for three matches being contested on the opening day – one in each country – the competition will be united from the first whistle across the 23 Candidate Host Cities, all of which are excited to welcome the world to North America.

About the United Bid Committee

The United Bid Committee was created by the National Federations of Canada, Mexico and the United States to manage the bidding process for the 2026 FIFA World Cup™.