It’s been a busy summer of moves for many in the U.S. Men’s National Team player pool. In fact, barely a week has gone by without someone associated with the MNT finding a different home for the new season.

Whether a transfer or loan, a change of clubs is often part of player’s progression. It can be a step up in to a bigger challenge or one to get more playing time. With leagues in Mexico and Europe already or about to get underway, here’s a recap of where MNT players have landed the last few months.

Coming off two very successful seasons on loan with Dutch Eredivisie side Vitesse, rising MNT center back Matt Miazga is embarking on a new challenge going on loan from Chelsea to French Ligue 1 side Nantes, who finished in the top half of the Ligue 1 table. The 23-year-old follows in the footsteps of Alejandro Bedoya, who became a fan-favorite with Les Canaris during the course of three seasons at Stade de la Beaujoire, with the club playing on the U.S. connection when they announced the signing on Aug. 6, 2018 (see below).

In Germany, Bobby Wood will remain in the Bundesliga this season after Hamburg agreed to send the MNT striker on loan to Hannover 96 last month. Die Roten have a long history of signing U.S. players, with the lineage including the “Mayor of Hannover” Steve Cherundolo, Clint Mathis, DaMarcus Beasley and Conor Casey. After a tough season with a relegated Hamburg side, Wood will hope to rediscover his scoring touch at the HDI-Arena.

In England, left back Antonee Robinson recently secured his short and long-term future, signing a new three-year contract with Everton before the Premier League club sent him on a season-long loan to Wigan Athletic. Despite only having one training session under his belt, Robinson was thrust into the starting XI this past weekend, earning high marks and even helping set up a goal as Wigan defeated Sheffield Wednesday 3-2 in the club’s season opener. 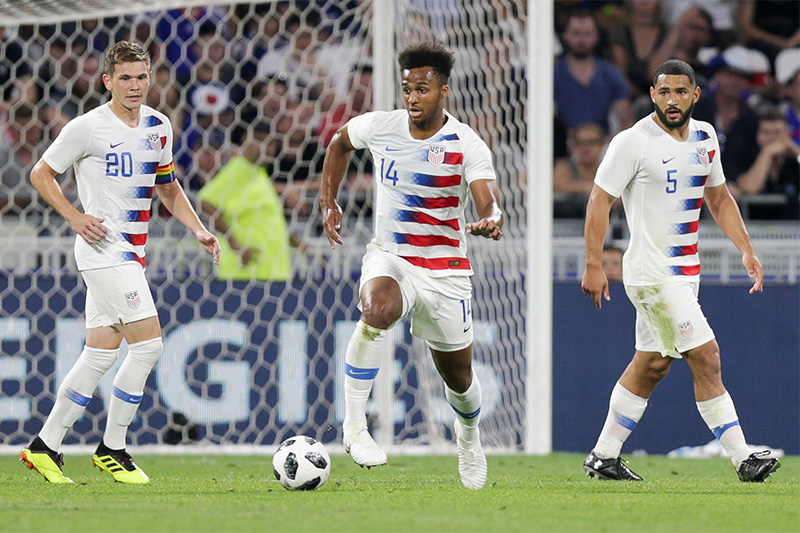 After signing with Manchester City and immediately going on loan for the second half of last season with Kortrijk in Belgium, center back Erik Palmer-Brown (pictured above) will spend this campaign with Dutch Eredivisie side NAC Breda. The U.S. captain at the 2017 FIFA U-20 World Cup, Palmer-Brown takes up residence at the same club where current MNT General Manager Earnie Stewart spent some of his best years as a professional, and will look for his first full season of consistent playing time.

Joining EPB in the Dutch top-flight is Andrija Novakovich. A product of Muskego, Wisc., Novakovich burst onto the MNT scene in March thanks to a campaign in which he scored 22 goals in 38 matches while on loan with Dutch Erstedivisie side Telstar. Similar to Robinson, Novakovich signed a new two-year deal with the English League Championship club Reading, before returning to Holland on loan with newly promoted Eredivisie side Fortuna Sittard.

Having gained his initial first-team minutes with La Liga side Levante last season, right back Shaq Moore has arrived at Catalan side Reus Deportiu on a season-long loan. The 22-year-old got off to a good start over the weekend, tallying in a 2-0 preseason victory against Cambrils Unió.

While many MNT players are out loan this season, some are also staying with their parent clubs.

In Germany, Josh Sargent is now eligible to play in official competition with Werder Bremen and has started well, scoring goals for the first team during preseason while also tallying in his first official match for the club’s U-23 side.

WATCH: Behind the Scenes with RISING MNT Striker Josh Sargent at Werder Bremen

A week after scoring in the MNT’s 1-1 draw with France, Julian Green signed a permanent deal with 2.Bundesliga side Greuther Fürth, who in part re-paid the MNT attacker for the goal that helped them avoid relegation on the final day of last season. It’s been a similar case for Kenny Saief. Sent on loan from Gent to Anderlecht during the second half of last season, the MNT winger made his move to the Belgian giants permanent in May.

Following a number of successful seasons with Pachuca, MNT center back Omar Gonzalez has taken his talents to Guadalajara with Atlas, while Michael Orozco joined Lobos BUAP earlier this summer.

Check out a full rundown of this summer’s MNT player moves: